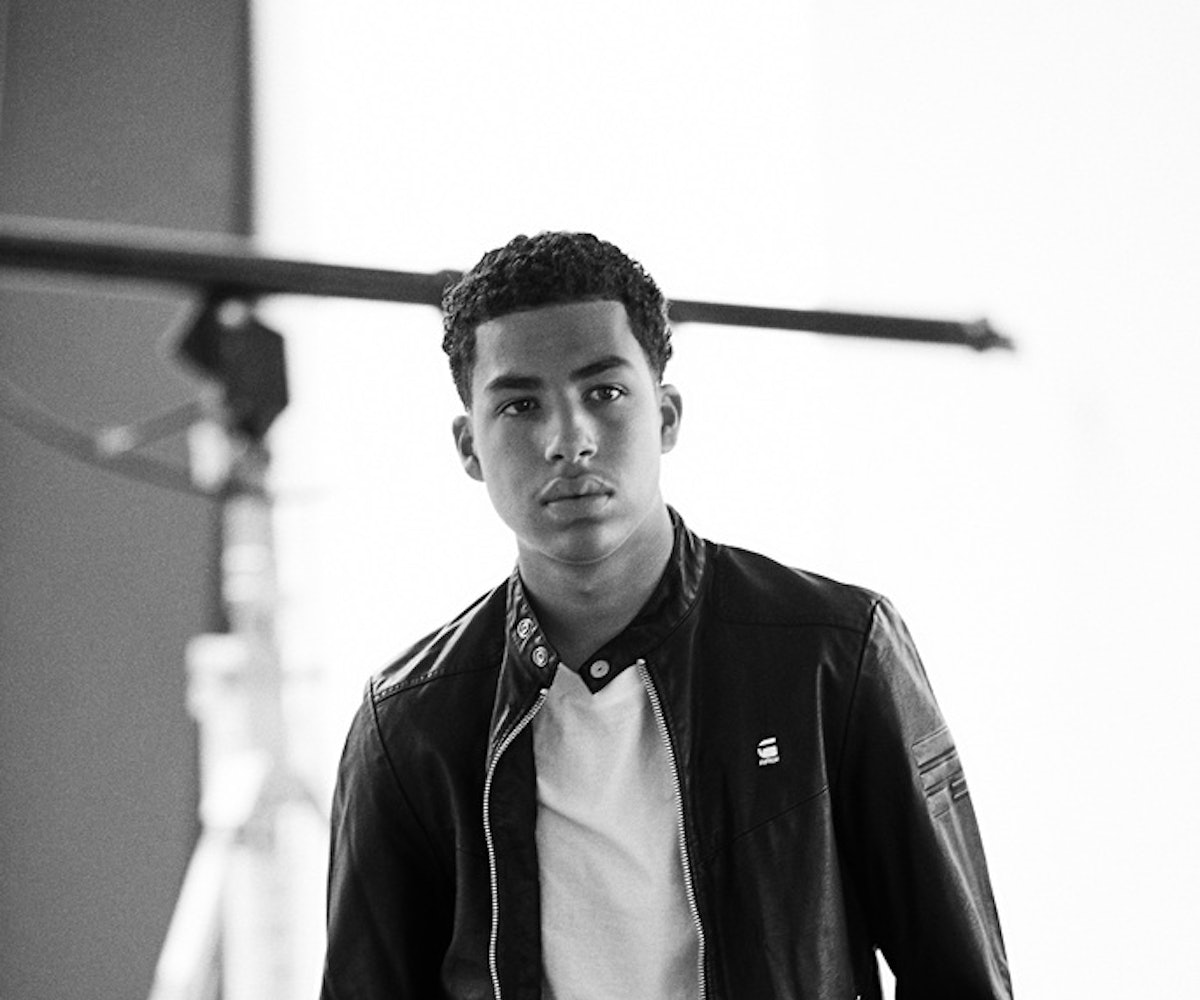 If you try to trawl the internet for info about Marcus Scribner, you're going to come up pretty empty-handed. This makes a certain kind of sense since he’s only 17 years old, so there’s not much to know about Scribner yet. Here’s what you should know, though: The California native is a high school senior and is gearing up to apply to colleges (when we chatted, he was set to take the SATs the following weekend *shudder*), he’s heavily involved in humanitarian work, and he expertly plays Andre Johnson, Jr. (also known as Junior) on ABC’s Black-ish.

Junior is the black sheep of the family. He’s the sibling you try to convince is adopted, because there’s no way his interest in capes and wands goes alongside your coolness. He’s also the type to believe you when you prank him, not simply because he's gullible, but more because he is compassionate and thinks it's how everyone should be. When the family asked Scribner’s character what he would be getting the new baby born at the end of the last season, his answer was "emotional support." He explained solemnly: “Johnson men don’t know how to be gentle.”

Scribner’s a little less, let’s say, sensitive than Junior, but holds some of the same interests: He’s into comic books, plays video games, likes to read, you know, classic nerd things. Scribner’s portrayal of Junior is also one to pay attention to. He manages to hold his comedic own adjacent to seasoned actors like Ellis Ross, Anthony Anderson, Jenifer Lewis, and Laurence Fishburne, making him one you’re going to want to know. Ahead, we help you get started.

You’ve been on the show since you were 14. What’s it been like spending a bulk of your teenage years on a television set?

It’s been pretty awesome. I think that’s, like, every teenage kid’s dream, to spend their life on a television set. I know it was definitely mine growing up—I started acting when I was around seven years old, always going on auditions, reading scripts, always very interested in storytelling in general. And I finally landed my big break when I was 14, and auditioned for Black-ish. Spending the last three years on that set has been a blessing because I feel like our set is just so supportive and has such amazing actors, and it really just feels like one big family.

Half the cast for the show obviously skews very young, and then the other half are veterans in the industry. Is there any advice or lessons that you’ve learned from Jenifer Lewis or Laurence Fishburne or Tracee or Anthony?

I think the best piece of advice I ever learned was from Laurence and it was to diversify and make sure that I’m doing different kinds of projects, not just sticking in one lane, and making sure that I really like the script. Because, if you don’t enjoy what you’re doing, you’re not going to make a good product. Also, just being around them, you learn so much just from their acting styles, and even just how they listen during the scenes. Absorbing information from them is just the coolest thing ever.

I heard that you beat out Anthony Anderson’s son for the role. Was that awkward at all, when you got the role and he didn’t?

[Laughs] It was kinda funny ‘cause, when we first went in for the audition, Anthony made sure to come out and let everybody know that his son was auditioning. And he was like, “None of y’all have a good chance ‘cause my son is auditioning for this role!” And we were all super nervous, we were like, “Oh my god, we’re screwed.” But I ended up getting the role and I talked to Nathan afterward, he’s a really cool guy... there are no hard feelings at all.

The show obviously tackles important issues, particularly ones that affect the black community. Do you ever feel pressure being part of such a monumental show?

Not at all. I think that all of the pressure is alleviated because of our amazing writers. Every single week, they come up with brilliant scripts that are tackling topics that are relevant and pertinent, just making sure they’ve really got their ear to the ground. So there’s never really any pressure for us actors, we just get to come in and have a great time, make up any funny lines that we want to, and try to put our best work into the brilliance that they bring out.

I feel like it’s actually quite the opposite—I feel pride in the show that we’ve created because people constantly come up to us and tell us that it’s made a difference in their lives, and I think that’s one of the main goals of acting. If you can entertain and make a difference in somebody’s life, I feel like you’ve done a successful job.

And you mentioned you guys make up lines sometimes. Is there a lot of improv that goes on during taping?

Oh, yeah... the audience doesn’t get to see, like, half or 75 percent of what we come up with. Anthony’s great at just coming up with stuff... he’s always changing lines. It’s hilarious getting to work with everybody. I mean, we have scenes that will go on for legit like 10 minutes after the director yells cut and everybody’s just there like, “Come on, we’ve gotta get home.”

You’re involved in the Sandals Foundation, as well as Animal Tracks. What spurred your interest in humanitarian work?

You never know where the next brilliant idea is gonna come from, and I think it was really my first trip through the Caribbean with the Sandals Foundation that really spurred that drive to continue to help people around the world. One of the schools that I visited, the school is literally operated out of a freight bin—you know, one of those giant cargo shipping things that you see on boats—and they were some of the most brilliant kids that I’ve ever met in my life. They were in elementary school and they were writing stuff that I couldn’t do until I was in, like, middle school.

So it was just pretty amazing seeing all of the things that they were coming up with so little resources. Imagine the things that they could create up with if they had all of the opportunities that people in the states do. So I worked with Microsoft to get 13 Surface Pro computers shipped out there, visited a bunch of schools throughout the area—Turks and Caicos, Jamaica—and talked to some of the kids, went to an animal shelter, helped out over there. On one of my visits to Jamaica was actually Earth Day, so we got to help plant a sustainable garden for one of the schools. Just making sure to do as much as possible to help the poor communities and people who have less than we do, I always think that’s very important.

You’re vocal about climate change and issues that plague the economy. How do you feel about our current commander in chief and his policies?

I don’t agree with any of his... [laughs] his thoughts. We have proposed tax cuts coming out right now, and he’s focusing on that when there are people in Puerto Rico who are struggling to find water and food and resources after the hurricane. I feel like we’re focusing on all of the wrong issues right now. I really agree with Colin Kaepernick’s Take a Knee stance, but I don’t feel that Donald Trump should be focusing on that right now. I think attention is better spent on places that have been ravaged by the hurricanes. It’s just, altogether just a rotten situation, so I’m hoping that it all resolves itself pretty soon. But people need to take action.

Outside of Black-ish, you voiced a couple of animated characters, and I read that you really want to play Miles Morales. Has there been any progress in trying to snag that role?

Nothing I can speak of, if there has been. [Laughs] It’s an awesome role, I’d love to play Miles Morales, he’s a super cool superhero. He’s like Spiderman on steroids... but not really, don’t do drugs, kids!

Do you have a favorite comic book?

So your co-star, Yara Shahidi, is getting her own spinoff show called Grown-ish. If Junior had a spinoff show what would it be called?

Alright, so, I think they’re gonna stick with the “ish” theme. So, maybe, since Junior has grown up now and he’s almost becoming a man, I feel like it would be a nice, very simple play on his name, it would be Junior-ish. Because he’s not really a Junior anymore, you get it?  I mean, that’s the best I can come up with.

I noticed that you went to the Emmys. What was the coolest part? And what’s in the gift bag?

[Laughs] Well, first off, the coolest part of the Emmys I think is definitely the afterparty, because it gets really lit. People are happy that they’ve either won or even if they have not won, it’s just a good time to see everyone that you know in the industry and hang out, forget about all the worldly problems. There’s also really good food and mood lighting, and, I mean, who doesn’t love free food? It’s a lot of fun. And as for the gift bags, I have not gotten an Emmy gift bag yet.

Yeah, exactly! I think you need to win to get one of those gift bags. And I’ve heard there’s some pretty nice stuff in there, so I’m excited to see. People don’t reveal that kind of stuff, it’s kinda crazy.

And what can we expect from this season of Black-ish?

I think everyone has to tune in for our season premiere. I think it’s probably gonna be one of the coolest episodes that we’ve ever done. We’ve got music, dancing... it’s gonna be sort of like a Black-ish musical situation. So it should be a lot of fun. As for the rest of the season, I mean, all of our characters are getting older, they’re growing up, having love troubles, it’s just gonna be a lot of crazy issues that Black-ish is gonna be tackling this season. We’re gonna dive in head first, so it’s gonna be fun.

NEXT UP
Sale
These Cyber Monday Deals On Amazon Are SO Freaking Cheap
Entertainment
Precious Pepala Is Going From TikTok Covers To Her Own Resonant Songs
The Art Issue 2022
From Renaissance To Gemini Rights: The Stories Behind 2022's Best Album Covers
Entertainment
Olivia Rodrigo Hinted At New Music In 2023