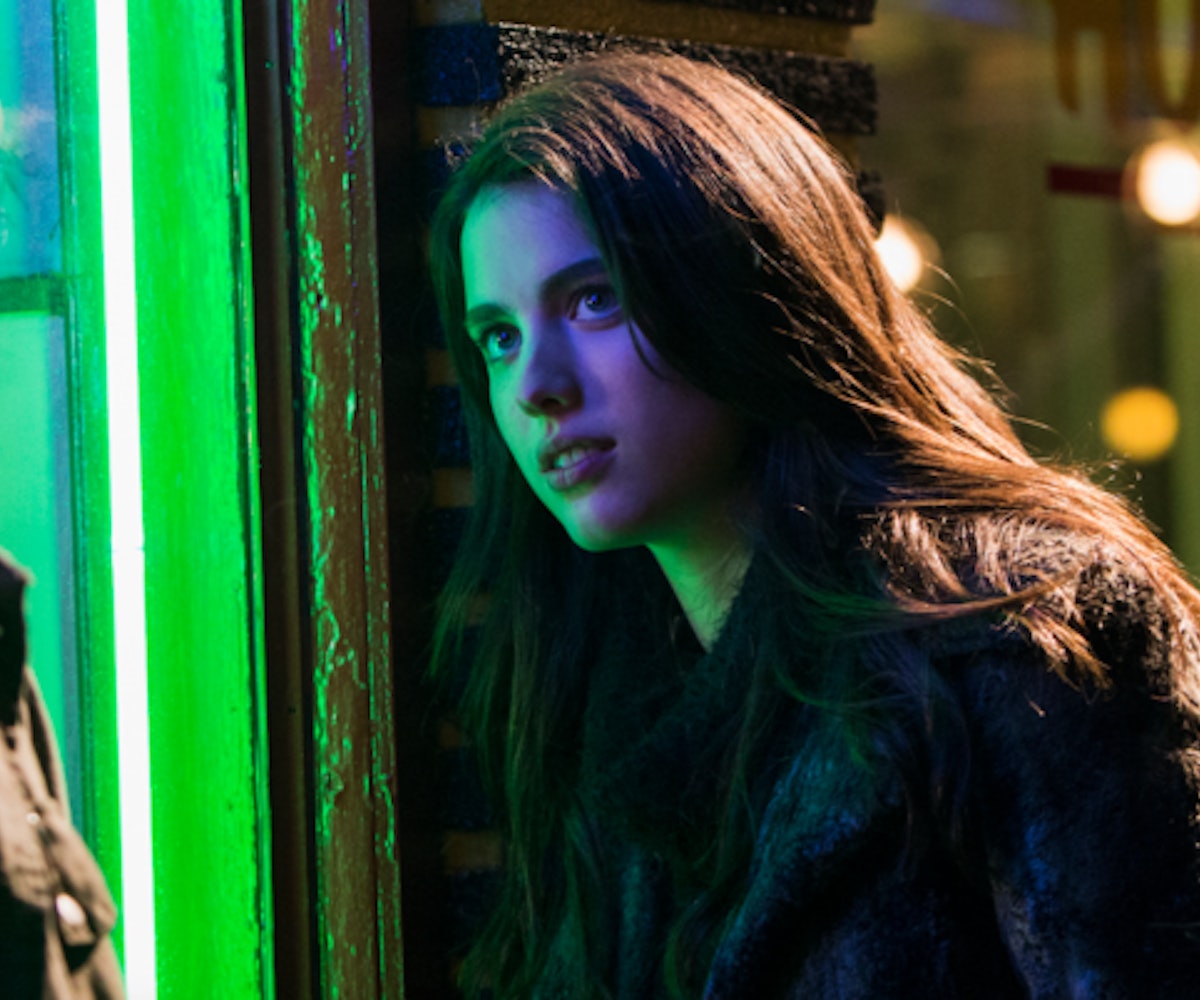 Margaret Qualley was born for movie stardom. Not just in terms of her lineage (Andie MacDowell is her mom) or her screen-friendly good looks, but more in her attitude toward the ideas of work and purpose. She throws her full reserves of passion into everything she does. In her younger years, it was dance, but now it’s an increasingly crowded résumé in screen acting. Passion is the defining quality of the young nun-in-training she portrays in Sundance breakout, Novitiate, and it’s the force compelling her to make use of a magic notebook that kills people in Netflix’s new film Death Note. Whether she’s taking her vows in devotion of a higher power or playing God using other people’s lives, for Qualley, there are no half measures.

On a Friday afternoon in midtown Manhattan, Qualley spoke to us about her upcoming slate of movies, her insane Kenzo commercial with Spike Jonze, and, of course, cat facts.

So, what would you do if you came into possession of a death note?

Oh, I don’t know! I mean, I wish I could write down a whole concept rather than just a specific name. Like hate, bullying, war, bigotry. There are a lot of frustrated people in the world, rightfully so, and the people who are supposed to be our leaders are some of the biggest bullies out there.

Have you ever gone through any big ethical quandaries in your life?

I think I do that with everything. I can’t help it. I overanalyze things to a fault. I spent too much time in my head sometimes. I’m one of those people who replays events when you’re trying to get to bed. Like, “Let me go through all the things I’ve messed up in the last 24 hours,” instead of going to sleep.

Work has been keeping you busy as of late, with a few different movies all coming out over the next few months.

Well, my part in Sidney Hall is tiny. But yeah, there’s Death Note, and Novitiate is going to Toronto next month, which I’m very excited about. It’ll be my first time there. I had a really good time at Sundance, so I hope I’ll get to see some movies while I’m there in Toronto, too. Plus, it was a really nice crew of people, so it’ll be nice to see everybody.

About Novitiate—are you ever tempted by the nun lifestyle? Is there an appeal in the simplicity of it all?

I’m not religious. So, my way into understanding this character was comparing it to... I grew up dancing, right? And I was really serious about ballet, and even if you’re 13 or 14 years old, dancing can feel like a job if you’re that committed to it. Six to eight hours a day, it’s your whole life. And it requires a lot of discipline. It’s very all-consuming. I thought of entering the convent that way. There’s something nice about the construct of having all the rules, having a right and wrong way to do things. I understand wanting that order.

Do you feel that you’ve still got space in your life for dancing or modeling even as your acting career ramps up, or are those being squeezed out?

Acting is definitely what I want to be doing right now. And when I quit dance, I kinda went cold turkey. It was too hard for me to do it for fun afterward, because I’m a perfectionist, and it was too much of a bummer to not be as good as I used to be. I danced for the first time since quitting when I did that commercial for Kenzo with Spike Jonze, and that made me realize all the things I love about it, because I had such a blast. Ryan Heffington, the choreographer for that video, has a dance studio a few blocks from my house in L.A., so I go whenever I can.

That video was wild, by the way. How did you run up the stairs in heels like that without snapping both your ankles?

That specific sequence was the hardest one to shoot, not necessarily because of the heels but because I had to make it up in a certain amount of music, two counts of eight. I had to run really, really, really fast—as fast as I could. We hadn’t quite gotten it, there had been a couple camera issues, and then I was slightly too slow, but they ended up using the last take we shot. In that one, I’m running, and I know I’m not gonna make it, so I just dive and tuck and roll out of frame. I know I’ve gotta get out of the shot, so I just [mimes barrel rolling].

In Death Note, you play a character that’s more straightforwardly evil than anything you’ve really taken on before.

You sound a little ambivalent.

Obviously, she does some really messed-up stuff. But I do understand where she’s coming from, which is that she sees the greater picture. She’s got an overwhelming sense of responsibility. And I think that she ends up finding Light kind of a coward at the end of the day, because everything is gray to him and black and white to her. Nothing will prevent her from doing what she believes is right. But yes, she goes too far. Okay. [deadpan] So she killed a few people. C’mon.

Things are good! I live with my sister Rainey out in L.A. It’s a dream setup for me, but she’s already talking about moving, and I’m like, “No, I don’t wanna move! Things are perfectly set up right now!” We’ve got a dog together, she’s got two cats, who I’m allergic to. But it’s okay, they’ve got their part of the place, and I’ve got mine. She fosters cats, and every time I go away for work, she gets a new kitten to foster.

These are replacement cats, is what you’re saying.

Did you know that I’m less allergic to kittens than cats? Because the thing you’re allergic to is saliva, and older cats groom themselves, but kittens can’t lick themselves as babies. So I can kind of put my face in there on the bellies, that whole deal, because my sister Rainey’s not licking them. Fun fact!