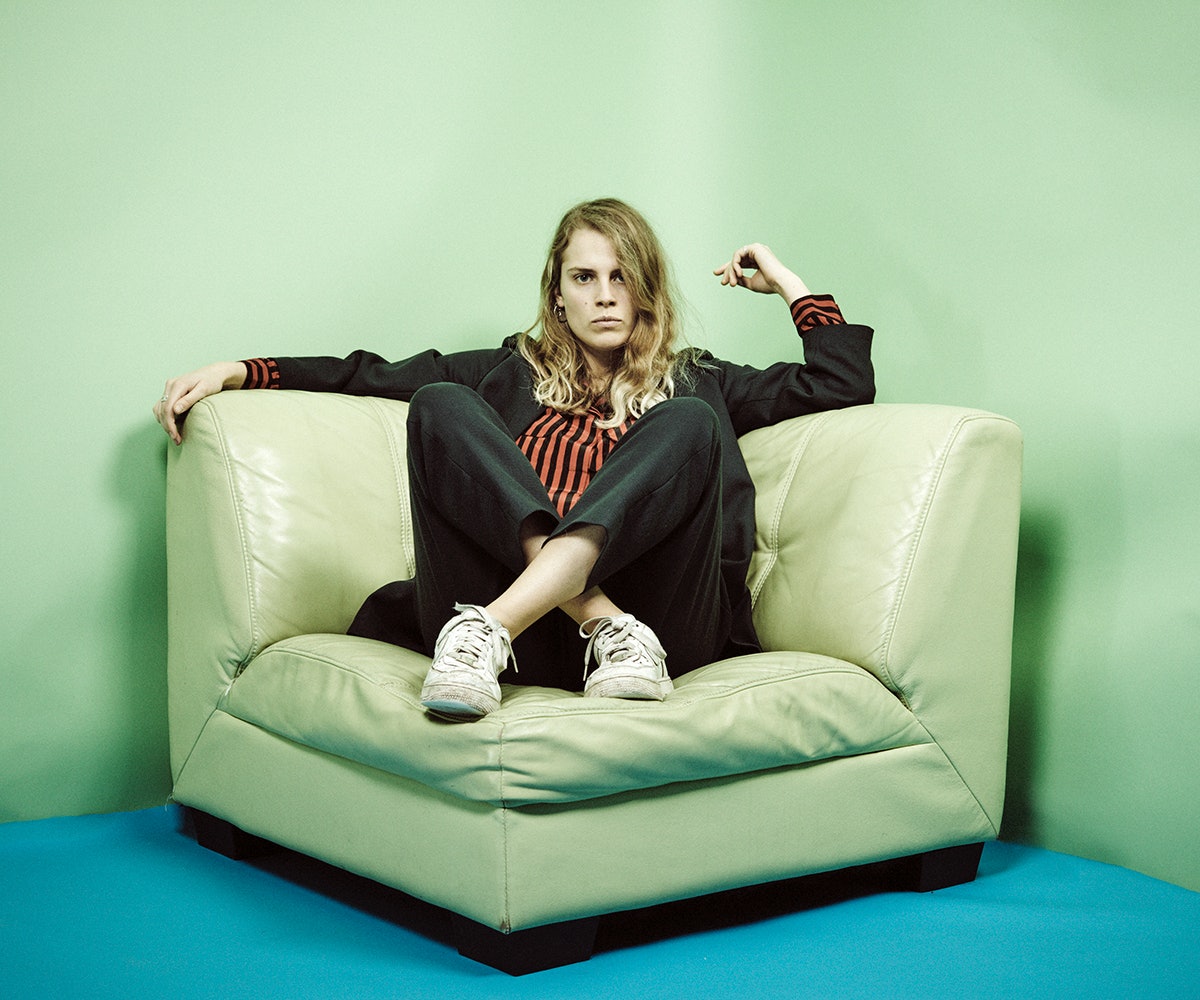 Marika Hackman’s latest record, I’m Not Your Man, begins with a chuckle on album opener, “Boyfriend.” Over a grungy riff reminiscent of “All Apologies,” Hackman croons, “It’s fine ‘cause I am just a girl, it doesn’t count/ He knows a woman needs a man to make her shout.” It’s a hell of an entrance, one that’s best paired with a hearty eye roll at the kind of dude who’s always down to fetishize young women. It’s also a line that expertly sets the tone for the remainder of the record—a brazen, tongue-in-cheek commentary on female relationships, the male gaze, and coming into your own.

I’m Not Your Man is a marked shift for Hackman, whose initial sound was somber, acoustic Brit-folk helmed by Laura Marling, Johnny Flynn, and Lucy Rose. Hackman made her debut in 2012 when she was featured in a video for Burberry Acoustic, a YouTube series featuring up-and-coming British talent. Her releases afterward, including 2013’s The Iron Taste and 2015’s debut LP We Slept At Last, were dark and meditative, replete with fingerpicking, haunting reverb, and alternative guitar tunings. But I’m Not Your Man, which came out June 2, is not only a welcomed departure but also one that showcases Hackman’s ability to use a bevy of soundscapes. From road trip sing-a-long, “Time’s Been Reckless,” to the medieval Vashti Bunyan-esque “Apple Tree,” to the Spaghetti Western goth rock of “AM,” it’s evident that Marika pulls out all the stops on her sophomore effort, clawing her way out of a Brit-folk pigeonhole.

I spoke to Marika (who was “knackered” after playing a show the previous night at London’s famed Heaven nightclub) about her album, upcoming U.S. tour, and what it's like to write from a place of vulnerability.

How'd you come up with the title for I'm Not Your Man?

I find that naming stuff is really difficult. You create this thing, and there's a lot of pressure on what you want to call it. I tend to just go back to my lyrics and look for stuff that kind of jumps out at me. And that's a lyric from the second track on the record called "Good Intentions." It's just a very bold, punchy statement, so I feel it fit the music really well. Also, it echoes a lot of the themes on the record about female sexuality and relationships, and sort of my worldview as well.

What were some of the influences for the record, musical or otherwise?

I never really know… I think I was feeling very strong emotionally and very stable, and I think that gave me a real confidence to write in a real direct way. The songs are, and as they always will be, very personal to me and the way I look at things. So it's a constant filtration of stuff in my life that gets a bit exaggerated, and I explore those feelings.

Your songwriting in the past was a lot more open-ended and abstract. Did you have any hesitation in writing from a vulnerable place?

I feel like the way I write, I'm quite self-deprecating. I'm putting myself in a vulnerable position doing that. I think it's more about being direct with lyrics. I think earlier on in my writing, I would hide stuff behind metaphors. I enjoy playing with words, but this time around I felt a bit stronger in myself to just be direct and put myself in a vulnerable position… and know that I'd be okay. [Laughs]

You've worked with [Alt-J and Bloc Party producer] Charlie Andrew since your very first release. What draws you to Charlie's sensibilities?

I think he approaches record-making in a really relaxed, interesting way. He's playful, and that's how I like to work as well, to let things flow. He's just really easy to work with. We creatively matched really well, and he's a close friend of mine. I had quite strong ideas about what I wanted to do making this record, and I knew he'd enable me to do that and facilitate the vision rather than someone who I have to bang my head against and be like, "No, I want to do it this way." He's so relaxed about helping you achieve your goal rather than just putting a "Charlie Andrew" stamp on anything.

The Big Moon served as your backing band for this album. What other artists would you like to collaborate with?

[Working with The Big Moon] was a natural collaboration because they're friends of mine. I think it'd be interesting to try to collaborate with someone who's in a different genre. I think it'd be kind of cool to see what would happen if I worked with Grimes. I really liked the last record and I think she's got a strange thing going on that I really like, but very, very different to me.

I would love to hear that! I read that in the past, you consciously avoided making pop music. Why have you embraced catchier, more traditional structures on this record?

I think again, it was a confidence thing. I was much more open to let things come and not try to fiddle around with it too much. I feel like as an established artist already, I had my persona already out there so I could be much more open with my writing now. And there's a split between me as an artist and as a person, and that made me feel much more confident to let lyrics just come out.

Do you come up with the concepts for your music videos?

Most of the time. The only one I didn't come up with the concept for was "My Lover Cindy." I was kind of struggling to figure out a concept for that. Then Sam, who's the video director I worked with, came up with that amazing idea that I thought was so perfect and strange.

I love that video so much.

Very strange. I was rewatching an episode of The L Word recently, and I was reminded of the "My Lover Cindy" joke, and I was like "Oh, RIGHT."

[Laughs] Yeah, that's one of my favorite references. It's kind of just in there for fun. It doesn't have much of a connection to the song. My girlfriend and I were going to start a separate band and call it "My Lover Cindy." We were writing songs for it, and then I went and stole the name. It's a bit of an inside joke.

Yeah, that's a good Easter egg. Speaking of references, the album artwork (designed by artist Tristan Pigott) has a lot of little inside jokes in it. I found the apple and potted plants were nods to some of the lyrics. What were some other references on the album artwork?

There are references to the last record, too. Also [The Big Moon members] Soph and Celia are texting. And they were actually texting each other when we shot that. And then on the table, there's a magazine with my friend Gina in it. She's my best friend, and I wrote the song "Gina's World" for her because she wanted me to write one for her. There are like 31 different references on the artwork.

You're going on your first American tour in the fall.

Yes! I've supported people in America before, but this is my first headline tour. I'm so, so excited.

And you played SXSW, right?

Yeah, that was a lot of fun for a week. I had The Big Moon play with me, and it was the first time I played any of these new tracks, so it was really cool. The response from the crowd was awesome.

What are the differences between British audiences and American audiences?

I haven't had too much experience with American audiences. And at SXSW there are so many industry people everywhere so it's not a fair judgment. I played a support show in Chicago where the crowd was just wild. I think British audiences are more reserved, but if you show them you're up for rocking out, it loosens them up. American audiences are just more ready to go, which is exciting on stage. You want to see people having a good time because it makes you feel like you're not just in a goldfish bowl being watched and you're actually in a room sharing an experience with people.

What are your plans for the summer?

I've got a few festivals over the summer. I'm going to try my best to start writing album number three as much as I can. I feel like I want to get the ball rolling on that because I'll be away for quite a long time. I find it hard to write when I'm on the road.

You've changed your sound considerably, it's much bigger and fuller. Are there any other genres you'd want to dabble with?

Yeah, I think I'm really open. I love classical music. I love choral music. I've written choral songs before, so maybe having a more orchestral sound. Or maybe getting a bit more electronic and playing around with synths and things like that. I'm really open to exploring genres, and I definitely don't want to keep repeating records. It's nice to push yourself. It's scary, but it's a good kind of fear that pushes you to reach new limits. I was really scared about recording a very different way for this album; I didn't know if I could pull it off or if it was going to work. I've done it and now I can, so I want to see what else I can try and do. One day this will go horribly wrong, and I'll realize that was a really dumb way of working [laughs]. But for now, I just want to explore as many genres as possible.