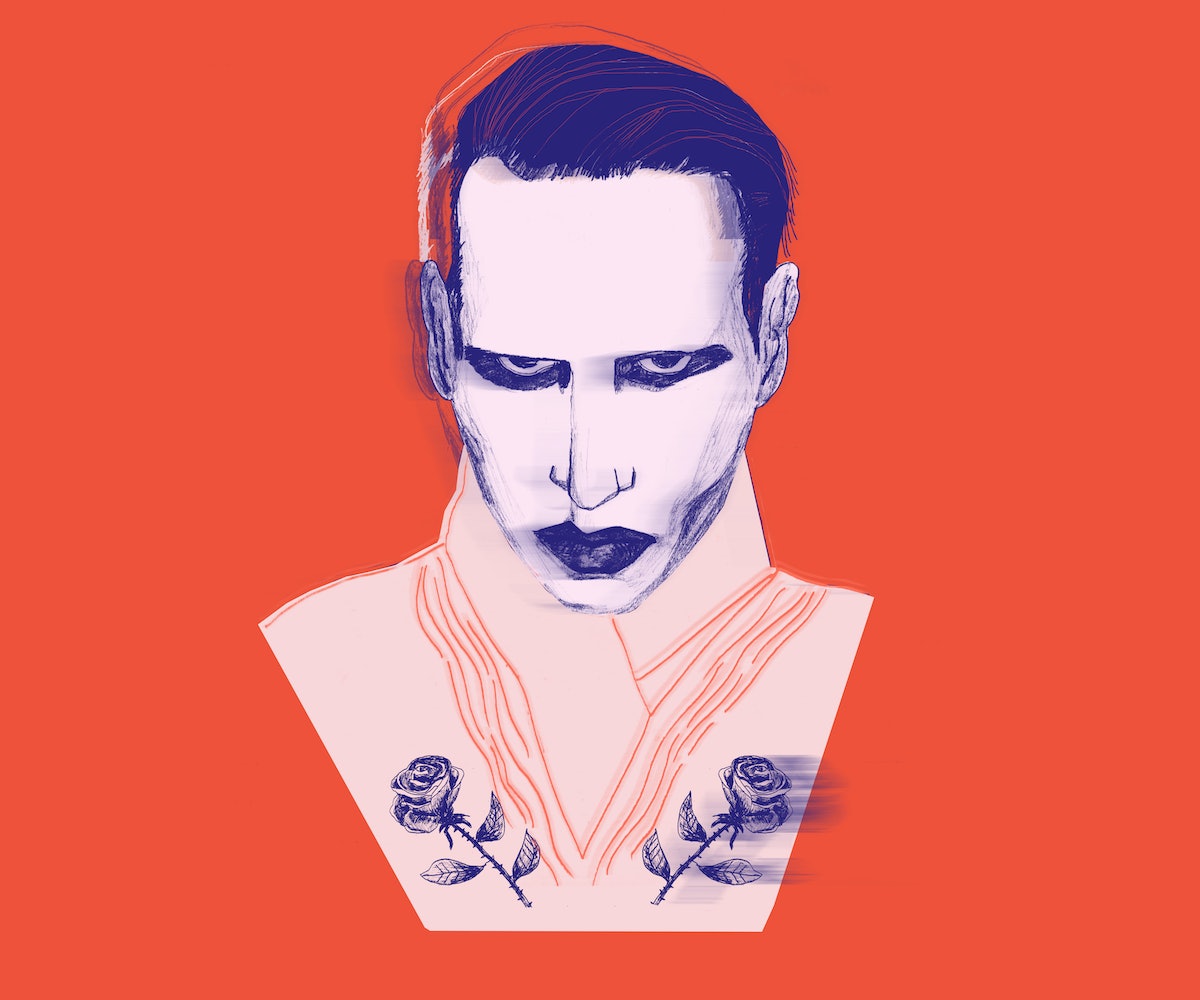 Marilyn Manson insists that our interview occur no earlier than nine o’clock at night. A little odd, sure, but it’s only because he’s a “night owl,” his rep explains. As a journalist, I’m prepared. As a fan, I’m excited. As a woman, I’m wary. The sometimes inappropriate, often misunderstood goth-glam musician, actor, painter, and author has, at times, been “witch-hunted,” but throughout his career has exuded an undeniable magnetism. It’s appropriate then, that his current endeavor involves playing barber/surgeon Thomas Dinley on WGN’s Salem. He also composed the show’s creepy-catchy theme song, “Cupid Carries a Gun.” Once our conversation finally happens, I’m happy to learn that Manson is funny, hyper-intelligent, and a little immature, but charmingly so. In other words, he’s an enigma.

How did you end up acting in the show this season?

They described the character to me and he sounded like a perfect match. You’ve got science, witchcraft, religion, and medicine, and my character seemed like the type of childish sociopath who looks at a body and wants to find out if it has a soul in it, to know where we go when we die. His answer would probably be a meat pie. While I was acting, they kept telling me to be more like myself, which is strange, like, “What are you trying to say about me?”

I saw a scene where you were eating a bug and you seemed to really be enjoying it.

That was a fun day because everybody else was afraid of the leeches. They actually had a leech wrangler on set. When I was a kid I used to put salt on slugs. We debated whether or not I was allowed to eat them; I guess I swallowed a stick.

So you didn’t actually eat the leech?

No, I had it in my mouth—this sounds pornographic [laughs]—but I didn’t swallow it.

The real Salem witch trials were meant to suppress strong and defiant females, it seems, not women who harbored supernatural powers. What are your views on that?

I think it’s still a part of culture. My library is full of books about the supernatural, from Dante’s Inferno to Hitler’s copy of Faust. I also have things regarding witchcraft. I think the Salem witch trials were probably more of a political move. Whether these women were practicing witchcraft is hard to say. I think that they, much like in Salem, were [guilty of] odd behavior or mental illness or drunkenness or whatever the case may be. But it was a much more confusing time for science and medicine. Being able to heal somebody—it was the same as when photographers were said to practice the black arts. It was frowned upon, especially when there was a double-negative image. It always goes back to the fear of losing the flock, and the Christians wanted to persecute these people who were leading them astray because it was taking away their business. I think that error is particularly seen in The Witch, which was one of my favorite movies of the year.

One could say you’ve been witch-hunted throughout your career, especially in the beginning.

Well, I certainly can’t blame anyone. I didn’t come out and ask for it, but I was pushing boundaries. There’s a song on my first record that says, “Don’t take time to sew your stitches, burn the witches, burn the witches.” I completely forgot about that until just now. There are so many strange practices in so many different religions: circumcisions when the rabbi sucks the blood out of the child’s penis—that could be considered bizarre witchcraft or cannibalism to some people—or the ritual of communion where you’re drinking the blood and eating the body of Christ. In the Salem witch trials, this faction of people lost because they didn’t have enough numbers. There’s safety in numbers.

Do you believe in past lives?

I believe in astro or alternate scenarios, a combination of déjà vu and chemical attraction. When you meet people and you feel like you’ve met them before, or if you feel like you’ve been to a place before. I have enough things in my house that are dead, like taxidermy and Tibetan death ritual scrolls, that if I’m being haunted, I’m asking for it. But I think it honors the dead in a way.

Has that always been a fascination of yours?

I don’t know. When I was a kid, I suppose I squished bugs and things like that. When someone you know dies it becomes ingrained in you. But I think my fascination was more in the unknown, in the same way that my character in Salem was. At Christian school you’re told one thing, but I wanted more answers, more concrete answers.

Yeah, it kind of sucks that we don’t know.

Your new album, SAY10, comes out on Valentine’s Day. What’s the significance of that date?

I hate the holiday, but for whatever reason Valentine’s Day has been an obsession for me. Its origin is a rather morbid one, not as romantic as some people think. It’s good reading if you look it up.

Why do you hate it?

I don’t know, I think I didn’t get enough Valentine’s cards when I was a little kid in school and that made me bitter [laughs].

How do you feel about young celebrities like Kylie Jenner and Justin Bieber wearing your band shirts?

Well, you can ask Justin Bieber to ask my lawyer how he feels about it [laughs]. You know, I don’t really want to be something that a younger generation thinks is cool enough to wear. But it’s a good thing because they don’t think it’s ironic. Like, it would be ironic if I were to wear a Lynyrd Skynyrd shirt or a band that I never liked, but if I wore a Bowie shirt it’s different. It’s difficult with Justin Bieber because he makes music, or whatever you want to call it. The culture that is important to most nowadays represents danger. They want to seem a bit punk rock, so at least I’ve made my mark and continue to make it.

So what’s going on with you and Bieber?

The whole thing was a joke to me at first, but then I met him and he was a cocky little bastard. No, he’s all right I guess. I don’t know.

I’ve always been really interested in your looks throughout the years. What has been your favorite?

It’s hard to say. Being that I paint, it always came naturally to paint my face and I’ve always done my own makeup. When I do a movie or a show like Salem, I don’t do my own makeup. But I always took inspiration from the films I grew up watching. Lately I’ve mostly been wearing, I don’t know if I’d call it a more masculine version of makeup, but it’s less. Sometimes when I don’t wear lipstick I like the way that looks better, because it looks like I got beat up in a Russian prison or something. Black eyeliner is something that always suited me because I shave my eyebrows and it brings out the strange shape of my head. It gives you more of a palette to work with when you make it blank. People don’t recognize me if I’m not wearing makeup or if I grow a goatee or something. It affords me the ability to be more chameleon-like.

Do you have a favorite brand or a product you’ve always been loyal to?

I use Christian Dior and M.A.C mostly—but M.A.C makes my favorite eyeliner.

Since this is our America issue, what would you say is your favorite and least favorite part of being American?

My favorite part is that when I go to other countries at least they think America has something more literal and more real. A lot of people look down on American culture, right now especially. So I can represent, I guess. I may complain a lot, but at least I do something with my feelings—make a song, make a painting, try to be part of something subversive culturally in art or movies, to add to the world rather than just bitch about it and try to take things away. Going back to the Salem witch trials, or televangelist politicians, they just want to take things out of the world. The only things they want to put in are to distract, so that’s the double-edged sword of being American. That would be the part that I don’t like. But I’m not going to vote this year because I don’t like either candidate—I’m not going to pick one of two things I don’t like. It’s like a menu of dog shit or cat shit, and I don’t want either one.