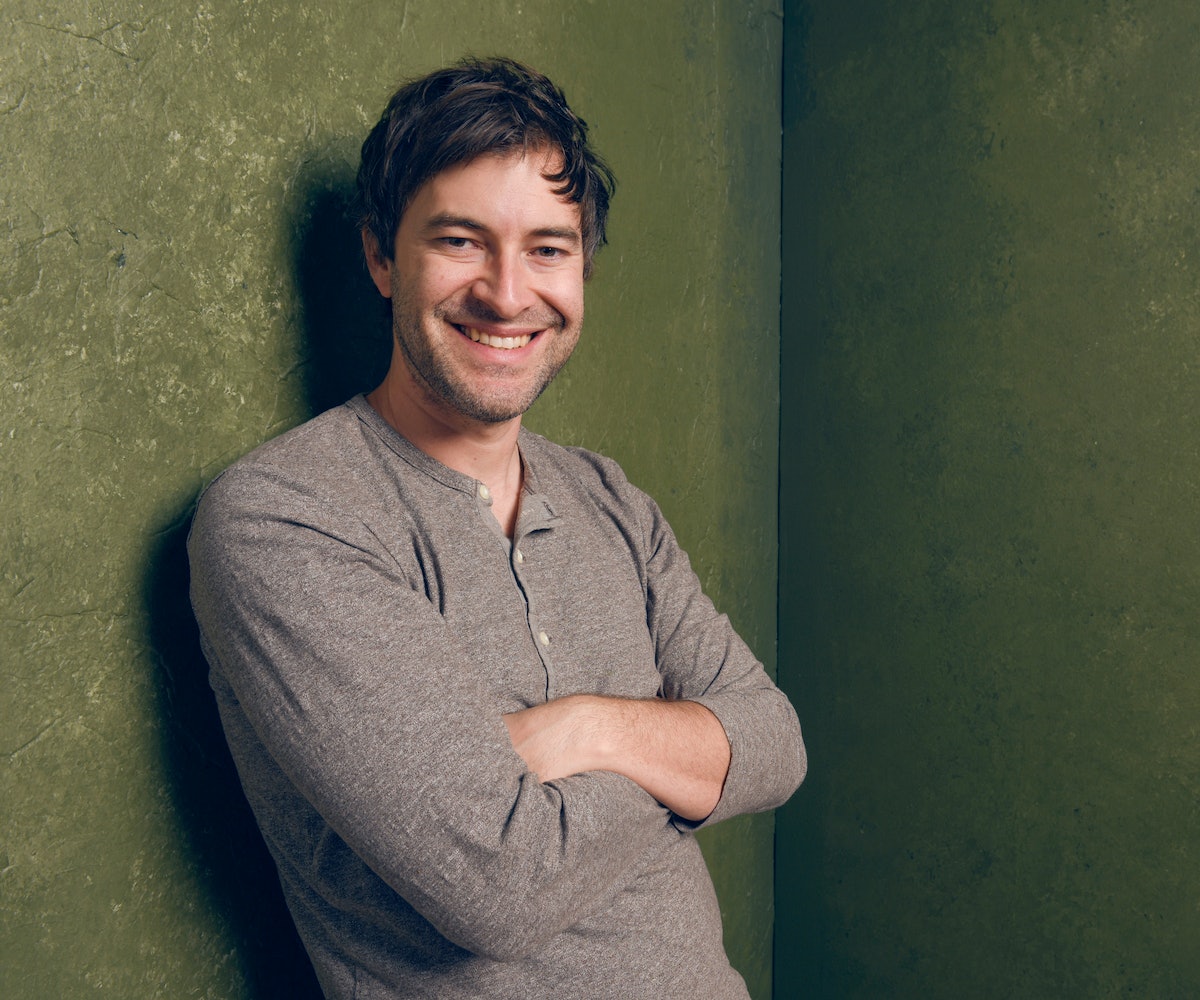 Mark Duplass remembers his first Sundance experience like it was yesterday. The year was 2003, and the film was This Is John, a seven-minute short he and his brother, Jay, famously shot for three dollars on their parents' VHS camera, about a dude and his answering machine. "I didn't think I belonged there," Duplass recalled during our recent sit-down in Toronto, where he was on hand to premiere his new feature, Blue Jay. "The production value was so terrible, and then it played really, really well."

In the 13 years that followed, Duplass would go on to write, direct, produce, and star in a diverse set of film and television shows—The Puffy Chair, Jeff Who Lives at Home, and the gone-too-soon HBO darling Togetherness among them—that showcased his ability to get things made and seen, while working on the fringes of the Hollywood system. Duplass has become so in demand, that Netflix just handed him and his brother a four-picture deal, transforming the indie upstarts into Hollywood's unlikeliest mini-moguls.

Directed by Alex Lemann and written by Duplass, Blue Jay—which hits theaters this Friday ahead of its Netflix premiere—is the first film to come out of that deal. It’s a delicate black-and-white pas de deux, in which Duplass and Sarah Paulson play long-lost lovers who have an unexpected reunion in their hometown. It’s also a living, breathing document of the Duplass ethos, shot in just seven days on a shoestring budget. That ethos—the one that values emotional currency over actual currency—is something Duplass hopes to relay to a group of aspiring filmmakers he’s mentoring as part of the AXE Collective mentorship program. “Jay and I never had any mentors,” he says. “We really just had each other trying to figure it out.”

I can't quantify it, and I don't know how to. It's less about surface level stuff, whether I'm married or successful, it's more about a feeling that I have when I'm—like let's say, you and I were high school best friends who didn't talk for 20 years, and we look at each other, and I would be shocked by the last time I was with you I was saying such different things, being such a different way, and it would be so thrust in my face that it sends you into a little bit of an existential wormhole. Some of it is good and some of it is bad. I definitely felt that when I started talking about Blue Jay to people, and that's something I do when I'm thinking about making a movie, I start verbally pitching it to people in different ways at parties and stuff. When I started saying, "You ever run into somebody you hadn't seen in a while and you pretend you don't see them, and then they recognize you, why the fuck do we that?" It's because there's apprehension and weird shame and maybe you have to posture a bit or something. I was like, "I don't understand this, but this is totally worth digging into."

Was it also a kind of way for you to get back to that shoestring way of making a film?

One hundred percent. I'm always looking for interesting ways to make movies cheaply and to make them quickly. Quickly has become more important to me now that I have kids and want to get back home. This movie, in particular, was like, "Oh this town 80 minutes outside of L.A. looks completely different than anything you see near there." Sarah Paulson and I were friends and had an interest in doing something together, and she had seen some of my movies and was like, "I'm terrified of improvising, but I want to try it." She kind of felt safe with me, because we share a close friend in Amanda Peet. So that was all kind of clicking, and this is just one of those projects where you kind of pluck the idea out of the air, throw together a two-page outline, gather some people, and say, "We can shoot this in like six weeks."

That sounds very much like the way you used to make films.

I've come to examine that process and why I continue to do that because I don't have to. I can get more money if I want to and give up some control and some equity. I love the speed, and it connects back to who I was when I was a musician. I talked to Jon Brion, the composer, and he was just like, "Don't ever record a song until you've got good mics and you're in the right environment because while you're writing that song and when you record it, it's never going to get any better than that." I was like, "What about cleaning it up later and rehearsing it?" and he was like, "Nope, the moment of inspiration, if you can get it down at that time, it’s the best." I thought about that a lot, and that's kind of what I'm looking for in movies like Blue Jay. Being unprepared is good for some of these movies. The story has to be sold and the structure has to be good, but getting in there and saying, "Okay, I'm writing the pages the night before, and you don't have time to memorize them," we're all on our feet and we're all vigilant and a little scared and a little nervous. That energy is what I'm chasing.

Are you comfortable working within the Hollywood machinery?

I'm not comfortable working in more stereotypical Hollywood machinery. I wouldn't know how to operate on a 150 million dollar Marvel movie because that is essentially a commodity and you have to obey those forces. You have to obey their money. What I'm really comfortable in now is this Pee-wee Hollywood environment of mine, which is "Yes, I have a four-picture deal with Netflix." That sounds enormous, right? In reality, Netflix is throwing, relative to what they operate on, pennies my way. Those pennies, to me, are gold coins because I know how to make cheap movies, so everybody wins. I'm very comfortable operating at the lower end of the Hollywood scale and I'm learning more about what's required for these companies to be happy and for them to continue to give me money to make movies, and I've developed those skills as a producer over the years of "Oh, okay they need a really good poster and a trailer and then they're kind of good." So, I've kind of figured that out. It's a learning curve.

Do you think it's easier now to get films made then it was when you were coming up?

It's a double-edged sword in my opinion. It's a lot harder to get movies made with any decent amount of money than it used to be because there was a lot less being made and you could get a five million dollar budget with an up-and-coming star and go for it. Now, you need three huge-ass movie stars to even get two million dollars. That being said, there are so many more companies funding the movies, so you have a lot more opportunities, and then, of course, the technology has afforded you the ability to not have to wait whatsoever. You can make a pretty good-looking movie on your iPhone, so that's both wonderful and terrible honestly. It’s terrible because it's creating a glut of really shitty movies to weed through. It's also tough on people creatively since you no longer have the excuse of "I can't make my movie because I don't have the money." But then when you realize that nobody's stopping you from making the movie besides your own creativity, that can be a little scary and a little crippling. That can cripple a lot of people.

Despite your success, do you still struggle with self-doubt as an artist?

I felt it big time with Blue Jay. I felt like while I was so excited to make the movie, I was very nervous about my ability to make a chamber piece with just two actors in black-and-white that felt relevant in 2016. That was a ballsy move on our part, but I was very excited to do it, and I think that being a little nervous makes you a little more vigilant and gives you a better chance to make something good. Walking into that theater last night, I was like, "There are 1,000 people coming here to watch a tiny black-and-white movie, what the fuck are you doing?" Then they loved it, and that felt really good.

What is an essential quality any emerging filmmaker needs?

In my opinion, someone who is emotionally aware, who has been to therapy, who understands how to be good to people, how to validate other human beings, the ability to create a tribe around you, to be the type of person that people want to be around is crucial. I don't delude myself into thinking that I'm going to be in this fortunate position as this filmmaker for the next 50 years. I'm going to have my valleys and my peaks, and I got a bunch of people around me, and I'm hoping that when I dip down, there's going to be somebody that I helped to pick me back up.