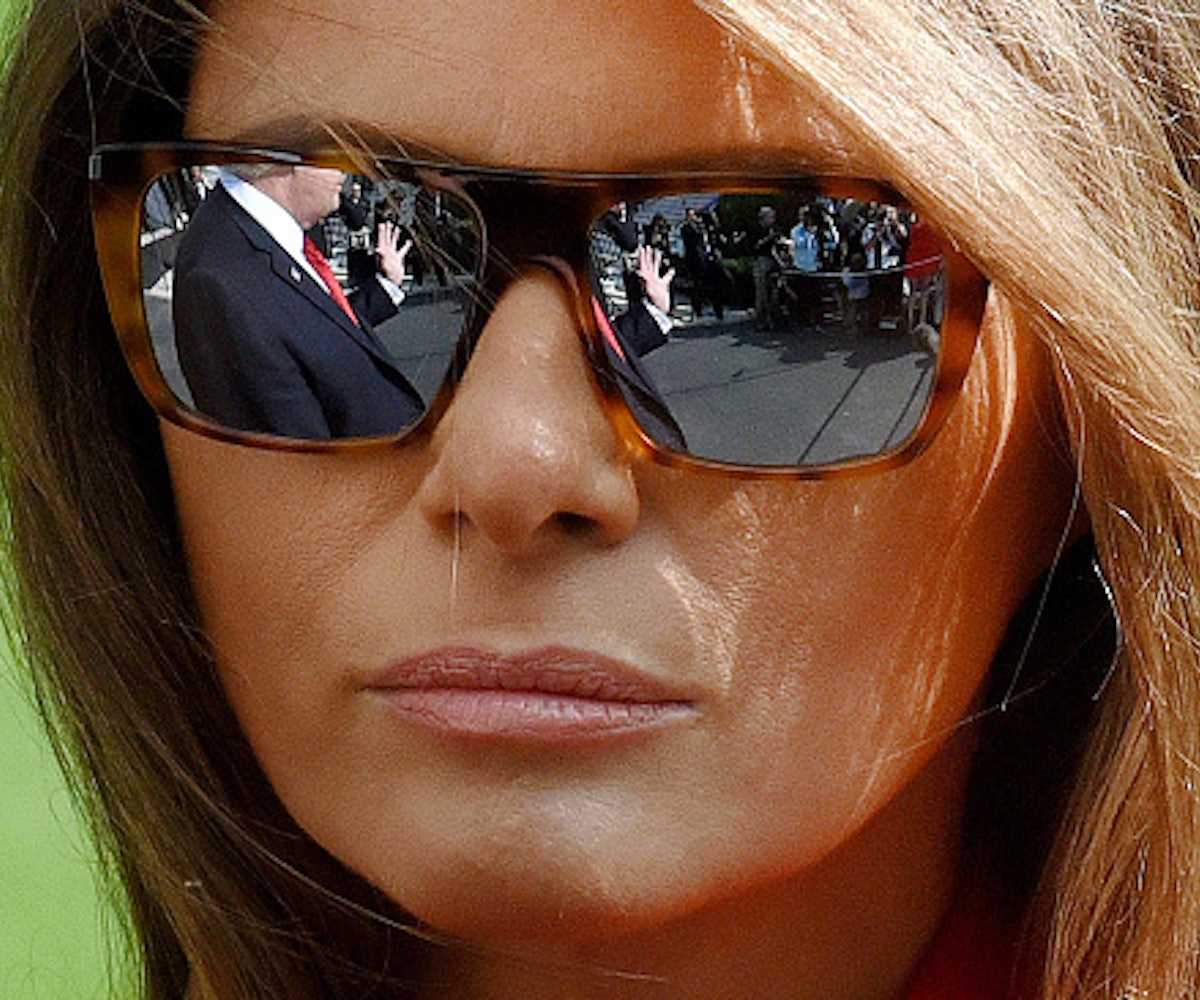 Melania Trump visited a children's detainment center on the Texas border today, and she had a really clear message to everyone watching: She really doesn't care. Do you?

Let's start at the beginning: The First Lady's visit came one day after her husband signed an executive order which would effectively end the policy through which his administration has been separating children from their parents at the U.S. border. The executive order does not help children who have already been separated from their parents, however, and seems like a pretty transparent attempt to quell the outcry over this utterly inhumane policy, which has led to public outrage and the  heckling of Trump administration members when they're just trying to enjoy their Mexican food in peace.

According to reports, Trump signed the executive order in part because his wife and daughter were distraught over images of the detained children. (Were those reports coming from the offices of the First Lady and First Daughter? Hard to say for sure, but also, yes, probably.) Today, Trump said at a press conference that his wife went to Texas because "it really bothered her to be looking at this." Which, okay. And early reports from the First Lady's visit indicate a concern for the children. New York Magazine reports she asked the center's officials questions about "how often children are allowed to speak with their families on the phone (twice a week, for ten minutes) and what their 'physical and mental state' is when they arrive." (The answer to that is: “Usually when they get here they’re very distraught.")

All fine and relatively benign stuff; nothing much was done, really, other than giving the First Lady a sympathetic photo op. That is, until she was getting ready to fly back to Washington, D.C., and the optics of this trip took a turn for the worse.

As seen in images from The Daily Mail, as well as on Getty and A.P., when Trump went to board her plane, she was seen wearing a jacket from Zara that costs $39. I know what you're thinking, Shocking! She usually wears only the highest end designer clothing. Why would she wear a fast fashion item? Clearly, Melania had a message she wanted to convey with that jacket.

But what message exactly? "I really don't care. Do u?"

Those are the words scrawled on the back of the Zara jacket, and they are leading many to ask the question of whether or not it is Melania, and not Donald, Trump who is the ultimate troll. Is this message intended as some kind of ironic statement about the fact that, despite having been accused of apathy in the face of her husband's countless human rights violations, she is actually down in Texas, putting in the time that so many people who are outraged have not? Or is it actually supposed to be her answer to the enigmatic question she once posed to a beluga whale: "What is she thinking?" Or is it just another example of how callous and feckless the people of this administration are, and how little they actually care about solving the horrific problems they're creating.

The First Lady's spokesperson has confirmed she was wearing that jacket, saying: "It's a jacket. There was no hidden message. After today's important visit to Texas, I hope the media isn't going to choose to focus on her wardrobe."

And perhaps that's true. The message isn't hidden at all. It's as clear as day: Melania Trump doesn't care.

But we do. We should. It's the only way these monsters will be held accountable.