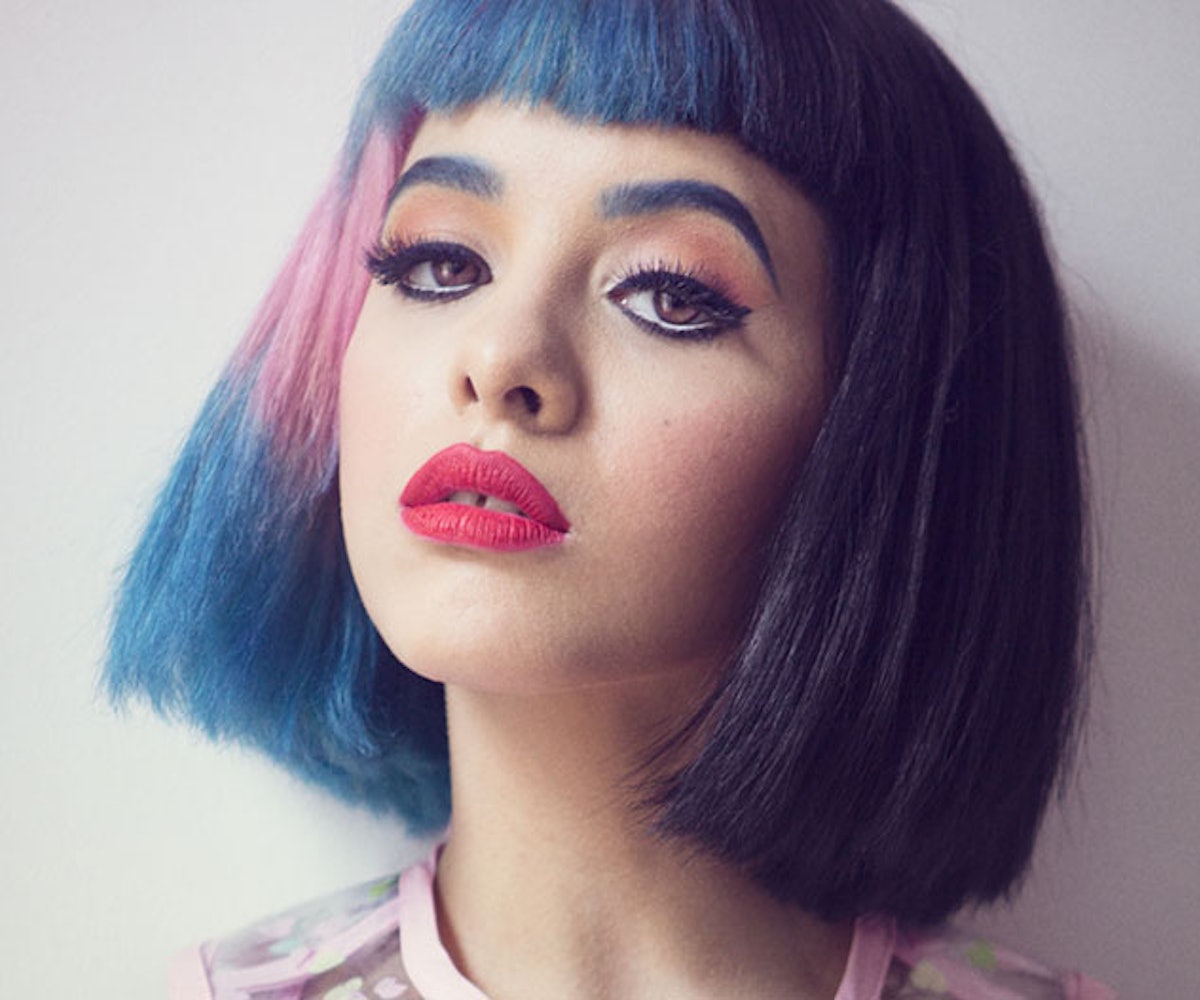 It is the things from our childhood that haunt and shape us the most. The loss of innocence is a bittersweet one, and oftentimes, the lessons learned in adulthood are best learned when put in layperson's terms. Or in the case of Melanie Martinez, the candy color-haired mind behind “Carousel,” seen through the eyes of the proverbial child.

The former Voice contestant is no stranger to the Lolita theme. 2014’s Dollhouse EP featured four songs about very adult themes told through simple terms. Her fantastical look and kaleidoscope hair helped foster an unforgettable presence. There’s a knowing maturity to Martinez’s work, and she plans on showcasing more of it when her debut album Cry Baby drops this August 14 on Atlantic Records. The juxtaposition of promiscuous parents, complicated love, and substances with carnival pop is haunting, but infectious enough to keep you coming back for more—like candy.

What’s the story behind the children's theme?

I look at music as an art form, and lately, I’ve been really drawn to vintage children's items like toys from the '50s and Russian teddy bears. I've clung to that as something I'm interested in collecting—pastel colors, that whole Japanese "Lolita" theme. I'm obsessed with that stuff. People usually write songs about how they feel and it's blatantly clear, like: “He broke up with me,” and the song that spawns is called “Heartbroken.” I always thought it was way more fun to say that in a completely different way. I have a song called "Training Wheels" and it's about being in love with someone and taking it to the next level by taking off the training wheels. I love the contrast between adult situations and the kid themes. It just shows it can all come back together.

When did you start getting into it?

I think a couple years ago. Dollhouse is when it all started because [that EP] was inspired by toy sounds—I was so inspired by toy sounds! Whenever I would have a writing session with a producer, I would sit at their computer and try to find sounds I could write to that would spark something. The toy noises were really what got me.

Did you play with a lot of these toys growing up, or is music a way of living a life you never had?

I had a lot of Barbies growing up, and a lot of porcelain dolls, but I was scared of them. I was so scared of them, I would try to turn their head away and would make my mom take them out of my room. I couldn't look at them. I feel like, me now, I'm trying to cope with that fear I had as a child. Now, I just love them and make necklaces out of them. I had a great childhood and had a lot of the things I talk about in my songs. I went to the carnival a lot. The carousel was my favorite ride as a kid. I had these things and am probably just reliving that.

Was there a moment in your life that made you say, "That is what I want to do. Music is it.”?

Honestly, I used to listen to a lot of Brandy, Britney [Spears], and the pop divas, but also some R&B and hip-hop. My dad loved it and played it all the time around me. I think growing up around my dad playing so much music just made me interested in it. I always sang along, and I loved thinking of melodies in my head and writing poetry. It actually got to a point where I was so interested in it that I had no other desire. I would write it down as a kindergartener. It’s something I need to do because I can't see myself doing anything else.

It’s been really hard trying to separate my personal life, like who I am as a person and who I am as an artist, because it’s so real for me. I've been thinking about this a lot lately, because you put a lot into your music when you're an artist, so when you put your whole self in, it's really hard to understand the difference. The whole album is a concept album. It's like an actual storybook with illustrations and stuff. So, the Cry Baby character is basically the really insecure, dark, and vulnerable side of me that's who I am deep down. Everybody has their own fears and what they don't like about themselves, and I feel like that's portrayed in the character I created for the album. Over time, Cry Baby goes through a transformation. She goes from being super-vulnerable and uncomfortable with herself to being super-confident, insane, and crazy. Through writing the album,I kind of did the same thing. I was insecure in the beginning writing it, but now I feel comfortable and confident with myself.

Is there anything about fame or the future that frightens you?

Absolutely. I love Sia and how she hides her face. If I could pull off doing that, I totally would. If I could go back and do that, I totally would because I think it's just brilliant. I can't imagine being stopped in the supermarket every five seconds and people going crazy. I don't know if I want that life, but I definitely want the music to be really well known. I want to hear my music all over the radio, just because I want people to know the story. It's definitely scary to me, but I can handle it because I was already on The Voice. I just want the music to be more well known than me.

How do you want your music to inspire girls?

I hope this album does [to girls] what it did for me. I hope people who feel insecure and uncomfortable with certain things—who feel like they can't change—feel the transformation I went through. I just feel so much better now. It was therapy for me. I hope people feel more comfortable being a “cry baby.” It's okay to be emotional. We're human beings; that's what it is.

Now, if you could put one word to the album what would it be?

If you could describe your music in an emoji, what would it be?

Maybe the baby bottle with milk—at least for Cry Baby. It’s really a mix of little-kid themes in adult situations.