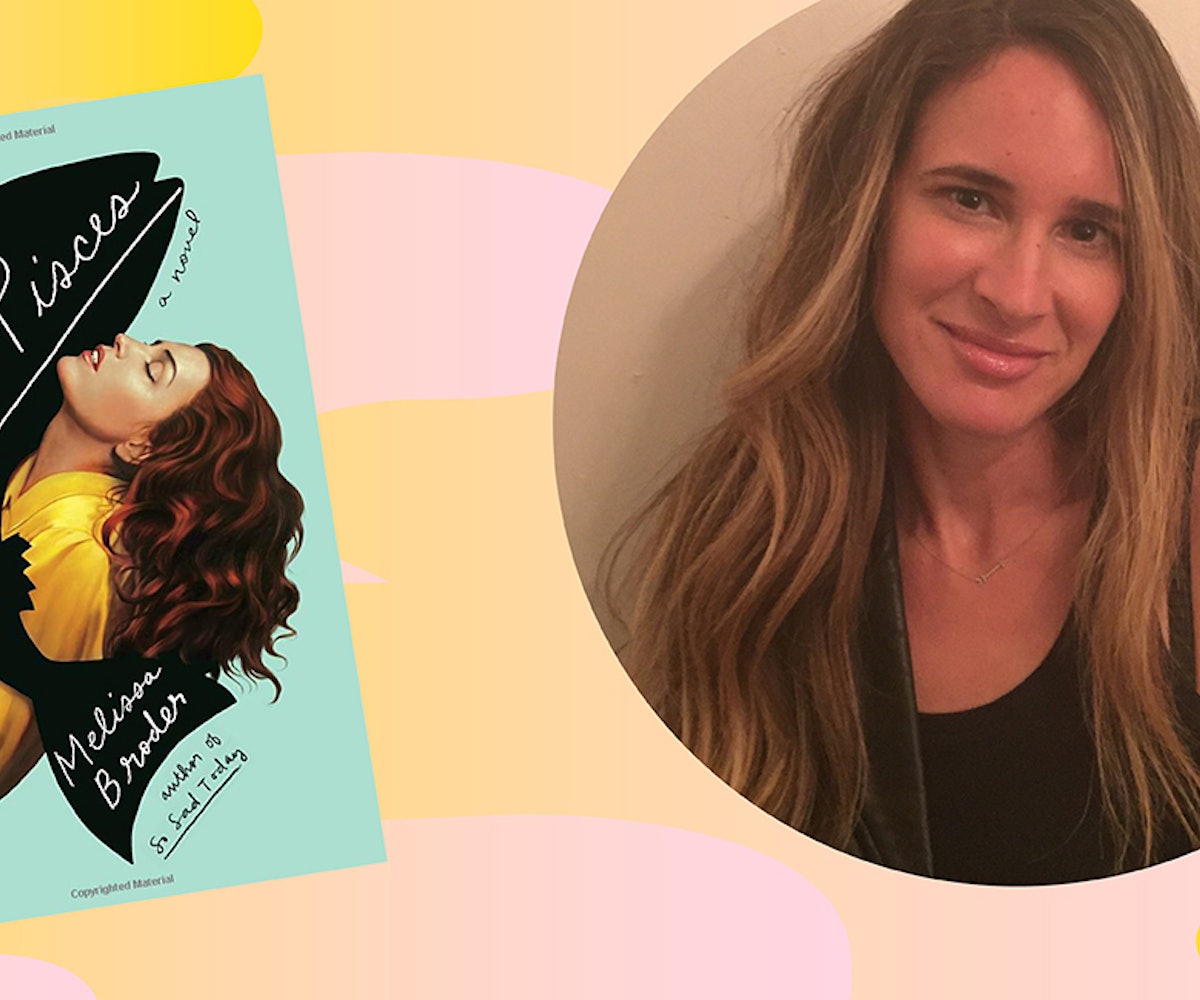 "If I were to fuck an Aries, I'd worry, you know?" Melissa Broder tells me over the phone, laughing. We're talking about her forthcoming novel, The Pisces, which, despite its title, is not really about astrology. (What it is really about is destruction and addiction and, yes, having sex with a merman, but we'll get to that soon.) And yet, we're talking about astrology anyway, and the way it has become newly centered as a belief system for precisely the kind of intellectually minded young women for whom the search for answers to life's big questions doesn't seem like it would take place in star charts.

But that's exactly what's been happening in the last several years, as so many young women have turned to the kind of witchy, spiritually oriented practices that have long been maligned for their divinely feminine aspects, and negatively compared to more practical, science-based pursuits. What gets lost in these comparisons is the fact that, sometimes, women seek out the ephemeral or the spiritual not because they're gullible or anti-facts, but rather because of the ways in which their needs have been disregarded by things like modern medicine (thus why women might be more prone to seeking out the work of homeopathic healers, since the medical establishment often ignores women's voices). Anyway, whether or not you regularly read your horoscopes, it's hard not to ascribe some of the anti-mysticism chatter to systemic misogyny, or at least an unwillingness to place value on something predominantly believed by women. As for Broder, who writes horoscopes for Lenny Letter, while she tells me about how she had a "major '60s and '70s fetish" her whole life, and "got into astrology to try to control the universe and try to bring love" to herself, she has now "sort of lost my belief in astrology as a means of trying to control or predict the universe. But, like the last Catholic who still believes in hell, I have not been able to shake it. So... if I were to fuck an Aries, I'd worry, you know? I'm gonna try to avoid having sex with an Aries as a Virgo, no matter how much I say I don't believe in it."

And the thing is, I do know—I think we all kind of know what Broder means, namely, that love and lust don't often make any practical sense, so we might as well put our own system of order onto the whole thing since it's all such a crapshoot anyway. How much of a crapshoot? Well, enough that Broder's novel features a protagonist, 38-year-old Lucy, who falls in love and lust with a merman, and you find it hard not to sympathize with Lucy and wonder if maybe a mythical half-man/half-fish is also the answer to your own romantic problems. After all, I think we're all pretty aware of how much the men who live on Earth have failed us, so why not look to the oceans for help? Sure, finding true love with a merman might be a total fantasy, but sometimes it feels like finding true love with an... Earth-man is, too.

This line of thinking, this wrestling between succumbing to fantasy or facing up to harsh realities, underpins all of Lucy's actions throughout The Pisces, and Broder, who is also a poet and essayist (and has two perfect Twitter presences), says that, after writing her books So Sad Today and Last Sext, she "still felt this need to continue exploring that dichotomy between why fantasy and the love we're presented in art feels so intoxicating, and why sort of what you might call 'real love,' or love with responsibility, doesn't always feel like that... It's that limerence, that intoxication of early love and forbidden love that is so delicious! And so, I still had a need to really explore that."

In The Pisces, Broder explores that limerence through Lucy, whom we meet while in the midst of hitting a kind of rock bottom, having endured a demoralizing breakup with her long-term partner, a move to her sister's home in Venice Beach as a temporary house sitter and dog watcher, and the joining of a therapy group to deal with her love addiction. Oh, and Lucy is also working on finishing her dissertation on Ancient Greek poet Sappho, in whose missing words Lucy hopes to find some kind of new truth, a beauty where there's only emptiness. What Lucy finds, of course, is a merman named Theo, and what follows is a dark, explicit, all-consuming romantic love to which we are conditioned to aspire, often to devastating consequences.

Broder tells me she was inspired to write the novel while "on the beach one day." She says:

Broder wrote the book in a semi-unorthodox way, by dictating it into her phone in three-paragraph bursts, but it worked for her: "Nine months later," she tells me, "I had the first draft." Broder explains that this method of writing felt very organic, and what's interesting is that it reflects the oral tradition of storytelling which has kept the mythologies of things like mermen and -women alive throughout human history. It's no wonder, then, that The Pisces shares some of the mythic qualities associated with that type of storytelling, including being rooted in a very definite sense of place—only, rather than the rocky isles of Greece, it's the rocky shoreline of Venice Beach.

Broder says, "If you're sitting on the beach in Venice and you look up, you can see the Santa Monica mountains. You could be on the coast in Greece. And I think that influenced all of the Grecian elements, too, right away." More than that, though, The Pisces shares a sort of morbid irreverence with a part of Los Angeles that, Broder explains, is "home to the Jim Morrison mural. The Jim Morrison mural is, like, its number one export in terms of art." But also, Venice is home to itinerant surfers, beachside body-builders, wealthy tech entrepreneurs, and the kind of women—represented in The Pisces by Lucy's sister Annika—who prioritize and spend money on "self-care" over all else. It's a motley place, one which attracts many people like Lucy, who are running from their past and hoping to start a new life, close to the water, far from their dusty pasts; it's a place in which you could fully imagine happening upon a merman late one night.

And yet, Broder's ultimate message in terms of Lucy is not that it's possible to be internally changed by external developments; that would be an endorsement of a kind of "capitalist magic," which Broder admits to enjoying, saying, "I've always loved that shit and we want to believe... Spirituality and symbols have always been inextricably linked and there's a reason for that. God or spirit, that's nebulous. It's like, ugh, can I just have the thing that's going to render me fixed? We all want that." But Broder also points out that the real work must come from within, and that's why Lucy's personal change doesn't happen just because she has sex with a merman, but is, in fact, a function of the work she starts to do to treat her addictive tendencies.

In The Pisces, the scenes set in Lucy's group therapy sessions are among the funniest but also most sobering. Broder tells me, "Whenever I write about addiction, it's usually drawn from my very deep well of experience with it." She explains:

For me, recovery, rather than transforming or becoming something other, it's much more learning to sit with what is in myself. So for Lucy, she's suspect about the therapy, and I definitely make fun of some of the language, you know? Because sometimes it can be sort of corporatized and homogenized, but in the end, these women do kind of save her life. That connection between women is what is important. We can be really cynical about the things that help us and they can still help us... Sometimes things can work even in spite of us, and I think that's what group therapy does with Lucy. It's really that love between women. Even though... she kind of hates them.

And what these women are saving Lucy from is a kind of toxic masculinity, a drive toward death as represented by Theo. While mermen have a long tradition in mythology, Broder tells me she created the merman she wanted to see in the world, explaining, "There are merman fundamentalists out there who are going to have problems with my Theo. And I just created Theo in the way that I needed Theo to be to work."

What Broder needed for Theo to work was... a dick. As she explains, "There are plenty of people in the world, including myself, who get turned on by people without dicks. But I knew that my Theo had to have a dick."

And he also knows how to use it. One of the most notable things about The Pisces is its many, messy, glorious sex scenes (the kind that really make you blush when reading on the subway), and Broder did tell me that adapting these sex scenes for the screenplay of The Pisces (it's been optioned by Lionsgate Films) has led to some problems:

But while the sex scenes between Lucy and Theo are undeniably fun—Broder explains that Theo "came from some archetypal ideal, what my primal and archetypal idea of a merman is, and also what would be the person who is concocted perfectly to be, at least on my end, one's dream lover. He will go down on you for hours, and he's really into it"—what he represents is the realization of a fantasy and all the inherent dangers that come with getting everything you want in one area of your life, to the exclusion of everything else. Theo, then, is addiction made, if not human, at least real; he represents the problems with love as an intoxicant, love separate from responsibility. He is beautiful and he is dangerous, and it is up to Lucy to figure out how to either manage that danger or learn to live out from under its spell.

Easier said than done, of course, just as it's easy to know intellectually that our astrological sign can't actually predict our future. The allure is still there, the desire to take the stories we tell ourselves and craft them into our own narrative, one which we can use to write our own destinies. And yet, just as Lucy must learn to accept the fact that Sappho's missing words were not intentional, and nothing can be read or projected into their absence, so, too, do we need to realize that sometimes mystery, whether in the form of a merman or merely in our unwritten futures, must be appreciated, so that we can go on with our lives. Or, as Broder tells me, "To let something be broken and still be beautiful is a very difficult thing; even just the way our minds work, we want to fill in the blanks." But sometimes that's not possible, and all we can do is surrender to those spaces, and find our home among the many fragmented pieces, imperfect though they may be.

The Pisces is available for purchase on May 1.