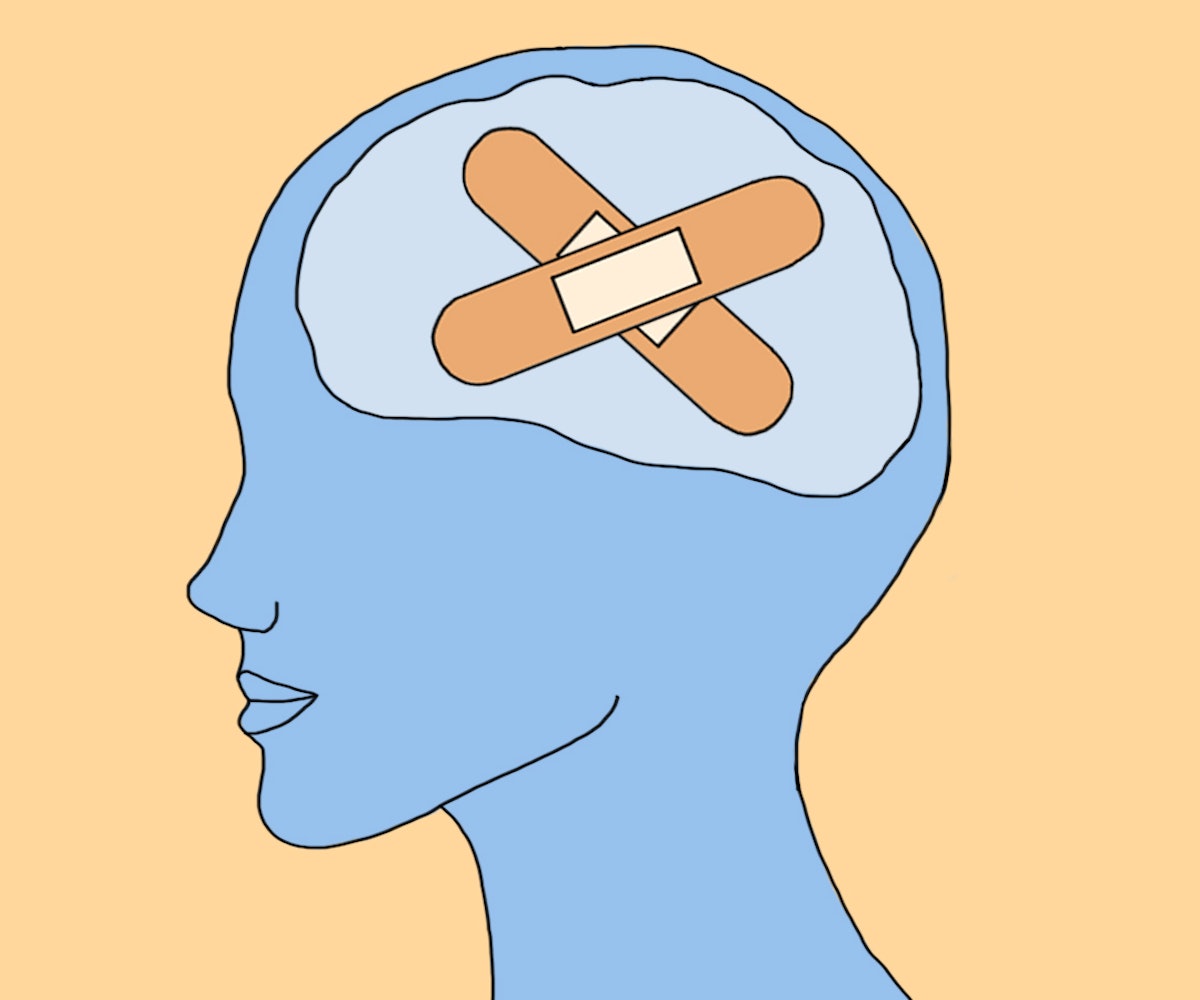 Mental illness runs in my family. You wouldn’t know it though because it’s a topic that's thought as being best kept behind closed doors, swept under the rug, hidden behind a really big plant; it can live anywhere but in conversation. It wasn’t until a decade ago, when its complicated, impossible to ignore realities landed on our doorstep, that we started to address it as a family. But even now, 10 years later, is mental illness becoming something that's talked about frankly, rather than just hinted at passively?

The silence surrounding mental health issues is one of the most unfortunate traditions passed down in the black community; more frequently than not, black families and communities push aside conversation about mental health of any kind. There’s a stigma surrounding the topic—a glaring one. Rather than being seen as a disease that requires treatment like a physiological problem, mental illness is viewed in the black community as a sign of weakness, a hump to get over, a “white person’s problem.”

However, mental illness is a disease that visits all people, indiscriminate of race or ethnicity; mental health conditions are as prevalent in the African-American community as they are in every other one; statistics show that one in five adults and one in five children live with some kind of mental health condition. And, according to the National Alliance for Mental Illness, African Americans are 20 percent more likely to experience serious psychological distress than white Americans, with the most common disorders being major depression (this often results in suicide), attention deficit hyperactive disorder, and post-traumatic stress disorder, specifically due to the fact that black men and women are more likely to be the victims of violent crime.

One of the reasons that black people have historically not sought help for mental health issues is because of the common perception that, considering the amount of trauma they have endured for centuries in a systemically racist society, they are capable of enduring more pain than others can, that they have a superhuman resilience and strength. And while black people are clearly strong and resilient, it’s true, sometimes that perception of strength can hinder the ability to address what is really wrong and fixable, to the point that it hurts individuals and communities.

“The image is put out there that we can deal with everything, that’s historical, this goes way back to slavery,” Carolyn Coleridge, a Kaiser Permanente therapist who runs several black women community groups, says. It’s one of the reasons why black men and women don’t seek out professional help; we have to keep up appearances of being more than capable because we’re existing in a world that already perceives us as being less than. “Society looks at African Americans as being a problem culture, that things are going on in the community that are negative,” Coleridge continues. “You don't want anything else to mark you, to make you look like there's something wrong.”

Another factor at play is a historical distrust of medical professionals—particularly white ones. “When considering mental health care options, black Americans may fear mistreatment, being hospitalized involuntarily, or being used as research ‘guinea pigs,’" Dr. Kimberly Gordon, child and adolescent psychiatrist, tells us. This dates back to such horrific occurrences as the Tuskegee Syphilis Study, in which rural black men in the South were prevented from receiving medical treatment for sexually transmitted diseases, so that doctors could see what would happen to their bodies; "Mississippi Appendectomies," in which black women, like Civil Rights leader Fannie Lou Hamer, were given hysterectomies or sterilized without their consent; and the story of Henrietta Lacks, whose cells were used by doctors after her death without her family knowing. It doesn’t help that, according to the Mental Health America website, less than 2 percent of psychiatrists are black. Add to the list the fact that therapy, medication, even securing an accurate diagnosis isn’t cheap nor always accessible. This leads people to seek help elsewhere.

“Have you been praying?” my grandmother asked a decade ago when she was clued into the familial happenings as if matters of the spiritual have anything to do with matters of the medicinal, as if the issue at hand was of the heart rather than the brain. She meant well; the church is at the center of the black community, and it’s commonplace to throw God at your problems, hoping he will deliver you from them rather than a doctor. There’s an underlying trust, between the black community and their religious leaders, that isn’t yet established with health professionals. And this isn’t to say religion isn’t helpful, it absolutely is and the church can act as a huge support system, but just like you wouldn’t tell someone diagnosed with cancer to choose prayer over chemo, mental health should be approached in the same way. “You do a disservice to your congregation to believe that you can treat people with serious mental illness without professional help,” Coleridge says. But, this is also, largely, a generational approach, and things are changing.

Since mental health issues started affecting me on a personal level, I started thinking about the subject of mental illness as akin to getting a new car. Hear me out: When it becomes a part of your life, you start noticing it everywhere. But I’m starting to think that the sudden uptick in interest isn’t due to its omnipresence in my own life, but that people are, simply, talking about it more—particularly in black spaces. It comes into our homes on the TV show Empire when we found out bipolar disorder runs in the Lion family (although it's not handled the most tastefully, but that's a topic for another story). It’s on Black-ish when Rainbow encourages Dre to go to therapy after dealing with microaggressions at work. It’s on Insecure when Issa suggests her best friend Molly should go to therapy after screwing up yet another romantic relationship.

It’s brought up in a significant and chilling scene in Atlanta when the protagonist, Earn, is waiting to be processed at a local jail. He watches as an inmate, described as “crazy” by others, dips his cup into the toilet, then proceeds to drink it. “Why is he in here every week? He looks like he needs help,” he asks, to no one in particular. “Man, shut up,” an officer standing nearby replies.

Coleridge also lists Oprah’s hit television series, Iyanla: Fix My Life, as another relevant show that’s working to erase stigma. “Iyanla Vanzant’s show has really, really helped African-American women because they have therapists on the show, they have the insight, they have people talking about it before we ever even talked about it,” she explains. “I always say that Oprah filled my private practice.”

Outside of television, black-hosted podcasts like The Read and Another Round bring up the subject of self-care, assure listeners that it’s okay to seek help, and touch on how important it is to find someone to talk to in almost every episode. Advertisements for Talk Space, an online and mobile therapy company, are littered between segments. And sign-offs include, “Drink your water, take your meds, call your person.”

I’m hesitant to label this new consciousness a trend because trend implies that it will eventually go away, and, hopefully, this awareness is something that sticks around far longer than our infatuation with millennial pink. And besides, this level of visibility is not just apparent in popular culture; it's everywhere: Coleridge says that she’s seen an increase in black patients, particularly women. And she’s making it a point to hire more black therapists to help address their multilayered needs by doing things like incorporating spirituality along with advice. “There are a lot of people going and talking about it and joking about it and we're using cultural context to help them feel comfortable and to get better,” she says. “I am really stunned at the number of black women, especially that are going to treatment, but I’m also thinking about the other people that aren’t in treatment.”

When I poll my black friends, all in the mid-20s age range, about whether or not they go to therapy, 80 percent say no. But of that 80 percent, at least half tell me that they’ve considered it, or would like to in the near future. This is promising. When I speak to my dad about the topic, he shows flickers of hope, too. “Do we need to talk about it more? Yep. Do we need to be honest about it? Yep. Do we need to seek help? Yep… It’s a tough thing,” he says, after a long pause. “It’s a tough thing.”