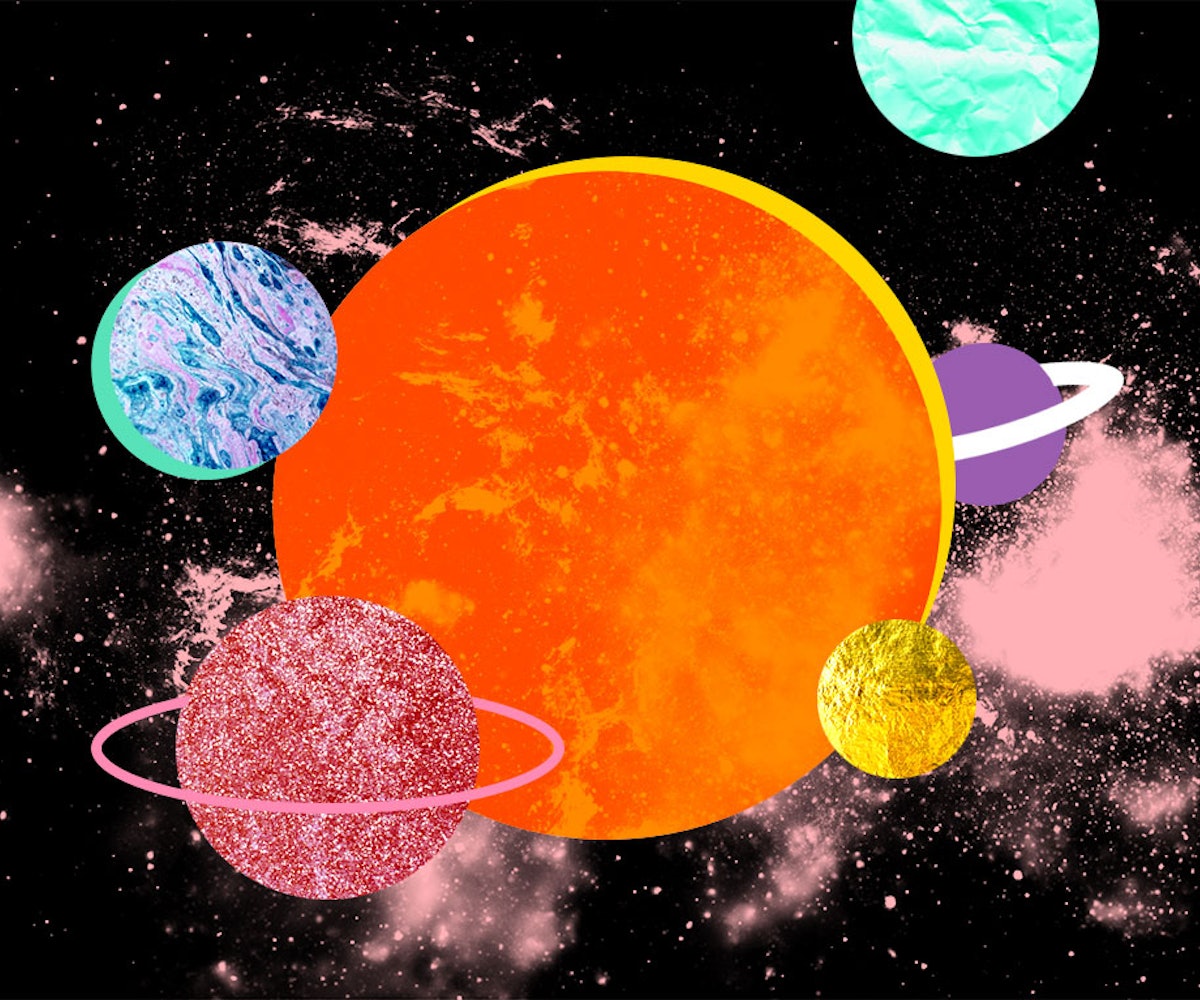 Unless you live on, well, another planet, there’s a huge chance that you’ve been within earshot of someone whining about retrograde hijinks (think: Major slowdowns, miscommunications, tech SNAFUs, and exes galore). Very likely, the culprit was Mercury, the planet ruling technology, communication, and formal agreements. Quicksilver messenger Mercury—who went retrograde on September 17 and will turn direct again on October 9—experiences three to four retrograde periods per year. Luckily, Mercury’s retrogrades are the shortest, only clocking in at around three weeks, tops, versus Saturn’s whopping 30-year cycles.

When a planet “turns retrograde,” it appears to orbit the sun in a backwards motion. This phenomenon is purely visual—no planets can actually move backwards, according to the laws of physics. There’s nothing mystical about retrogrades, but who wants to unleash a serious case of science class déjà vu?

Astrologically, retrograde periods generate opportunities essential for growth, breaking up stagnation and preparing us for change. The status quo is shaken, and if you feel like you’re being tested, you’re right; retrogrades are notorious for putting us in trying situations to teach fundamental lessons, often revealing the deepest parts of ourselves we didn’t know existed. These trials can range from minor hiccups and vexations to massive upsets powerful enough to level core foundations, depending on the planet. Consider this a wake-up call from the Universe to never get too comfortable: Change is inevitable, and personal evolution would not be possible without chaos.

Uranus, Neptune, and Pluto are called “Higher Planets” because they move at the slowest pace and bring monumental global transformations during their retrogrades. “Social Planet,” Jupiter and Saturn rule economics and politics and transition through retrogrades lasting four to five months. Though the Higher and Social Planets’ retrogrades can certainly be felt, their effects are simply too weighty to combat or prepare for fully, and are best dealt with by simply moving forward.

Mercury, Venus, and Mars—nicknamed the “Personal Planets” by astrologers—experience the most frequent retrograde periods and have the most impactful energy on our daily lives. Each of these planets’ retrogrades are so powerful, their chaotic energy can be felt as much as two weeks before the actual retrograde event in a “shadow period.” Some astrologers advise putting all decisions and new beginnings off until the shadow period has passed completely, but most realize how unrealistic that can be. Despite these being the most annoying retrogrades, these planets are the easiest to handle if you know what to expect.

With Mercury, expect small but viscerally irritating hurdles, especially dealing with technological glitches, errors in communication, and how information is delivered. New endeavors of any kind should be delayed until the planet returns to direct motion, if possible. Anything new that is initiated now has a high chance of breaking down and needing to be revisited, so it’s the best use of your time to wait it out. Sit on expensive purchases—especially when it comes to electronics and technology—until after retrograde. Because Mercury rules formal agreements, avoid signing contracts or giving your handshake to anything new. Old endeavors and relationships, however, can be revived now with lasting success. Mercury is known for bringing unfinished business to the surface, and will often reintroduce old friends and flames back into the mix.

Venus seldom experiences retrogrades, averaging one period every two years, lasting around a month and a half. You can bet on feeling strange vibes in your core values now, a slowdown in cash flow, and yup, there are those exes again. Who you’re attracted to can fluctuate wildly during Venus retrograde, and it’s not at all uncommon to experiment sexually or flip the script and date someone you’d never look twice at normally. Just like any retrograde period, introducing anything brand-new into your life now will likely be met with little lasting success (which can be a major blessing in disguise when it comes to Venusian flings with weirdos). Rekindling old connections can seem super-charged and karmically aligned. If the relationship’s original roots are strong enough, this realignment could produce lasting love on a soul-mate level. Venus also rules beauty, so it’s never smart to change your physical appearance drastically or spend on investment pieces during retrograde. And yes, it is a terrible idea to get married or engaged during a Venus retrograde.

Fiery Mars’ retrograde period can be incredibly intense and trying, as this planet defines how we focus our energy to slay our dragons and accomplish our most lofty goals. Not only is work life and career impacted with this phase, but also so our physical health and athletic abilities. Gym and sports injuries tend to skyrocket during Mars retrograde, so extra safety precautions should be taken. Mars also informs how we express ourselves sexually, so like Venus, you might surprise yourself with who you hook up with now. Luckily, Mars’ retrograde periods are the rarest of the three Personal Planets.

Occasionally, retrograde planets ask us to mirror their backward movements, launching us into the past. This leg of the journey can often seem fantastical and bizarre, materializing old ghosts in ways thought of as impossible. (Hello, blubbering 3 a.m. texts from your ex-ex, surprise job offers from a company that passed on hiring you last year, and running into your kindergarten best friend on the Union Square subway platform.) The specters we encounter now are rare chances to smooth out the kinks in our past to make way for a fresh start. Gnawing unfinished business can be put to bed, and in some cases, precious opportunities to “re-do” major fuck-ups can land in our laps.

But just like the planets, it’s not possible to move backward, regardless of whatever Groundhog Day you’re reliving. Center yourself with the knowledge that forward is the only possible direction. The experiences and knowledge we collect changes each of us by the minute, so even if you’re dealing with familiar territory, treat whatever goes down during retrograde time like new frontier.

Regardless of what planet is in retrograde, try to not take on too much and to keep a flexible, light schedule whenever possible. Avoid initiating new endeavors or clinging to people you meet during retrogrades, and be cautiously wary of anything that goes extremely smoothly now. Be open to strange messages and ideas, especially when it comes to employing nontraditional strategies to fix past problems. Always exercise caution when it comes to making big decisions, and if it’s possible to delay contract signings, major investments, and groundbreakings until after retrograde passes, take the chance—you won’t regret being prepared.