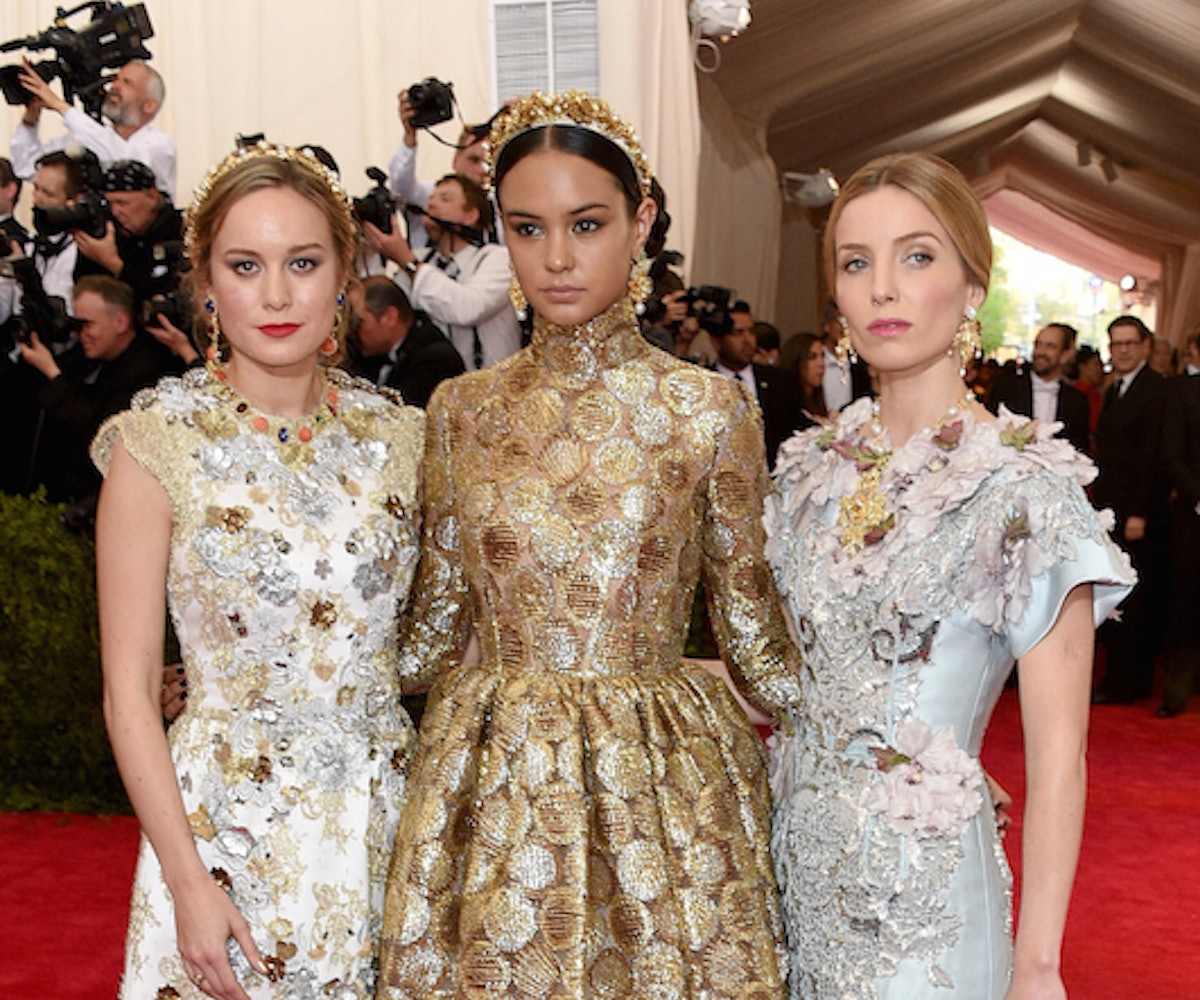 Yes, it is true: The Academy Awards is the most important night of red carpet fashion. But the Oscars are televised and relatively tame, and not exactly a place for experimentation and quirk. It is, to simplify the matter, the night that Hollywood invites fashion to its table.

The Met Gala, on the other hand, has fashion opening its hallowed halls to Hollywood. A-listers like Jennifer Lawrence and Rihanna learn about the CFDA and rub shoulders with fashion editors, and the biggest star of the night isn't George Clooney, but Anna Wintour. In other words, for fashion, the Met Gala is bigger than the Oscars because it's fashion's night to shine, and stars are just really well-dressed eye-candy. Our favorite looks from last night were beyond breathtaking, especially when you see red carpet pros like Lily Aldridge and Solange next to tinseltown bigwigs like Jennifer Lawrence or Jessica Chastain. Plus, you get the magical weirdness of Lady Gaga, and the grandeur of Rihanna—making it the most glamorous red carpet in the whole damn world.

This season's new look: Matching your dress to your hair.

It's as if the salsa dancer emoji went to law school and became one of the most beautiful human beings on the planet. Also, let's not forget that this John Galliano design choice is a political statement in its own right.

Volume, definition, a slit, and an ear cuff: This look covers every possible base.

It's as if this angel being dusted off her Mad Max character only to reveal a stunning jewel-encrusted gown. Part dystopian, part super sexy, this is how you make a nude gown look like a show stopper.

Listen, when you find your signature look, you don't just abandon it—not even for a themed event. We respect that.

Leave it to Janelle Monae to make a two piece look regal.

It's hard to stand out when you are doing a group costume (see Courtney Eaton), but this Dolce & Gabbana look is completely realized, head-to-toe. And the earrings, crown, and heavy detailing certainly do make it feel like there is a lot going on—but Brie balances it all out with a simple shoe and a feeling of opulence, which echoes China's history of fine embroidering.

This dress is art in and of itself.

You know what this? This is what happens when you have a concept and it is executed

Everything here derives from high art: The gorgeously thematic tailoring (which is a nod to the night without going over the top), the simple clutch, the Jack Vartanian earrings...plus the fact that she is a living statue.

This design should look gaudy and over-embellished, but the variation in tones makes it look sophisticated. And that kitty clutch—meow.

There isn't anything anything particularly thematic about Hathaway's Met Gala look, but it is delightful, because it has a hood. Call us suckers, but slap a hood on something, add some shine, and put a fork in us—we're done.

She almost looks like a '90s Sky Dancer toy, blooming straight from the red carpet. She could fly away at any moment—and just the thought of that is exhilarating.

Oh, don't worry, it's just a head-to-toe gown made out of feathers. Keri Russell is literally and figuratively a bird.

The Chanel spokeswoman obviously wore the label, but instead of doing a sweeping dress or on-trend cut-outs, Diane rolled up in a freakin' pantsuit like, "WHAT?"

Before this, I did not know who Courtney Eaton is, but Google tells me she is in the upcoming

movie, so her star is clearly rising. Along with Brie Larsen, Eaton was one of the gals who wore Dolce's brocade-heavy gowns, which were accompanied by delightfully matchy-matchy crowns. Not totally sure if this is particularly "Chinese"

, but matching your golden crown to your outfit is just the best.

The hair may not be the best of the evening, but there is something about the structure-meets-pouf vibe that just is a lovely balance. A lacy skirt of that size is always appropriate for the red carpet.

see this for any further proof

of this perfect angel's perfect outfit.

After having her on heavy rotation for the

, we miss JLaw's antics on the red carpet. And while it would have been great to see the evening's ambassador actually wear a, you know, Chinese designer, the Dior contract reigns supreme. The floral halter top was a nod to everyone else's flower-heavy ensembles, but with her own, Jennifer Lawrence twist.

If for some reason you thought that Rihanna wasn't going to make a grand entrance, well, you'll never forget it after this. The large gown (with an even longer train) will definitely be hard to navigate, but when you're the real Princess of China, mountains will be moved for you.

She looks like a cutthroat evil villain queen and we would totally bow down. Yaaassss Gaga. YAAAASSS.

Twigs, serving you corporeal realness since '88.