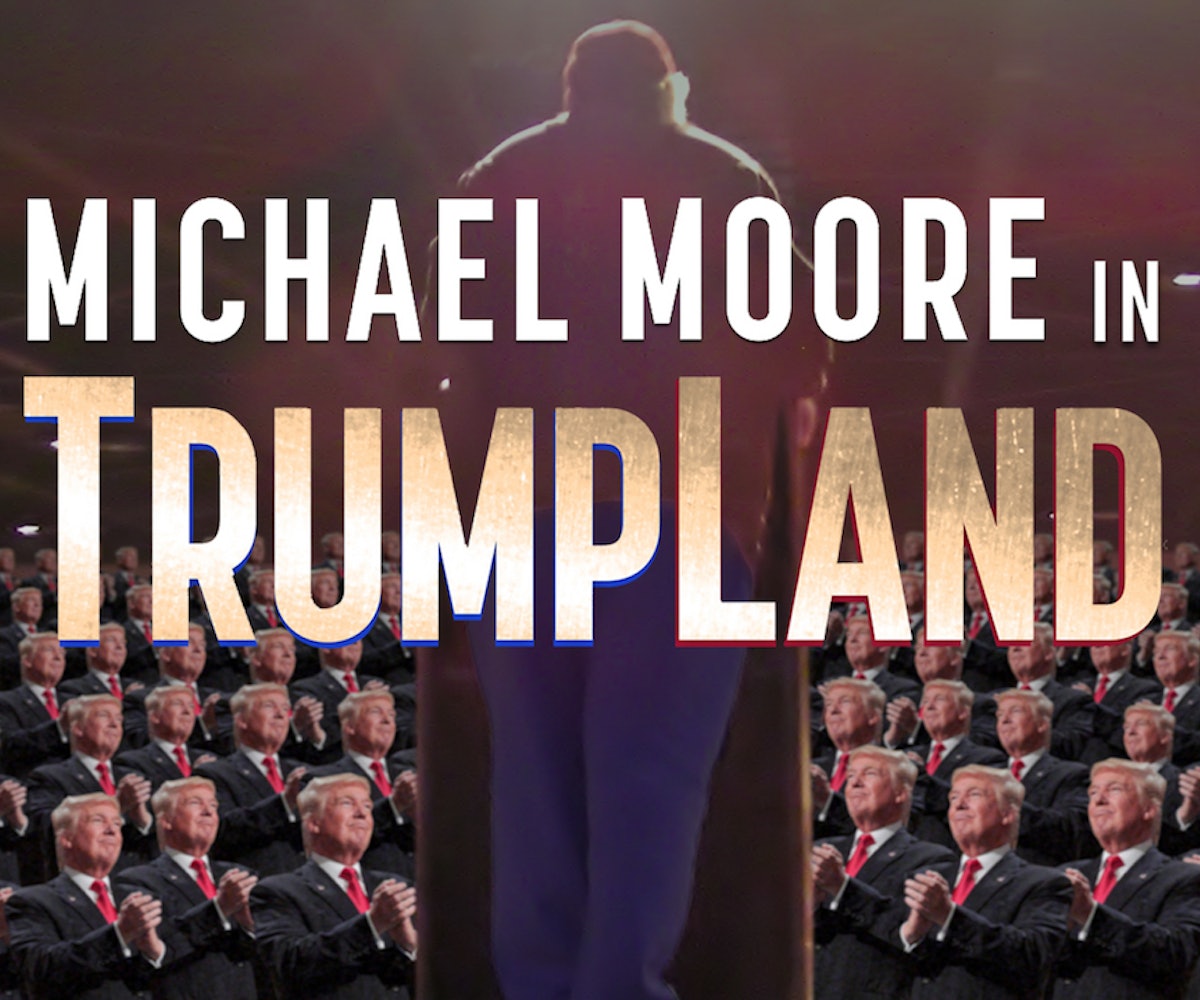 It turns out Michael Moore was doing a lot more than just tweeting over the course of this election cycle. On Tuesday, the political provocateur announced his surprise film, Michael Moore in Trumpland, which premiered at New York City's IFC Center just hours after the news broke. "We're flying by the seat of our pants here," Moore told the audience on Tuesday night. "Our goal is to have as many Americans see this over the next five or ten days."

The film captures Moore on stage, as he explains to a room full of people what would happen if either Hillary Clinton or Donald Trump became president. It was shot less than two weeks ago in Wilmington, Ohio, which Moore says is one of Trump's biggest strongholds in the country. “I wanted to do this not in a safe place, but in a place where we’d need a lot of security, which we had.”

In the film, Moore discusses the difference between men and women, calling white men over 35 "obsolete," which is why, he says, they show up to Trump rallies. Women, meanwhile, pose far less of a threat to our future, according to Moore. "No women invented a hydrogen or atomic bomb, and no girls have gone into schools to shoot them up," he says in the film. “Whatever you're afraid of does not wear a dress—or a pantsuit.”

Moore hopes that with this film, he depresses the Trump vote, in the same way that he believes the Clinton vote is depressed. "Our biggest opponent on election day is getting people out [to the polls] who have given up.”

Moore added that he plans to have little rest between now and election day. "If I leave here tonight with people thinking that this was just a nice funny show and that we’re not in any kind of trouble here because Trump has imploded... the shit show isn’t over. Don’t take any joy in this, because it appeals to the darker instinct of a country that has made some mistakes, whether it’s voting for Reagan or Nixon or Bush or the professional wrestler in Minnesota.”

Moore ended Tuesday's Q&A by recalling a handful of times the right candidate lost because Americans didn't go out and vote. "Remember, Kaitlyn [Bristowe]—we all thought she was gonna go with Nick [Viall], and she picked Shawn [Booth] on the Bachelorette. Jennifer Hudson lost on American Idol—our fellow Americans voted for Fantasia [Barrino]! I’m telling you, shit happens in America. They thought Jennifer Hudson had it in the bag. Don’t let Fantasia win on November 8!”

Look for Michael Moore in Trumpland on VOD sometime before November 8.