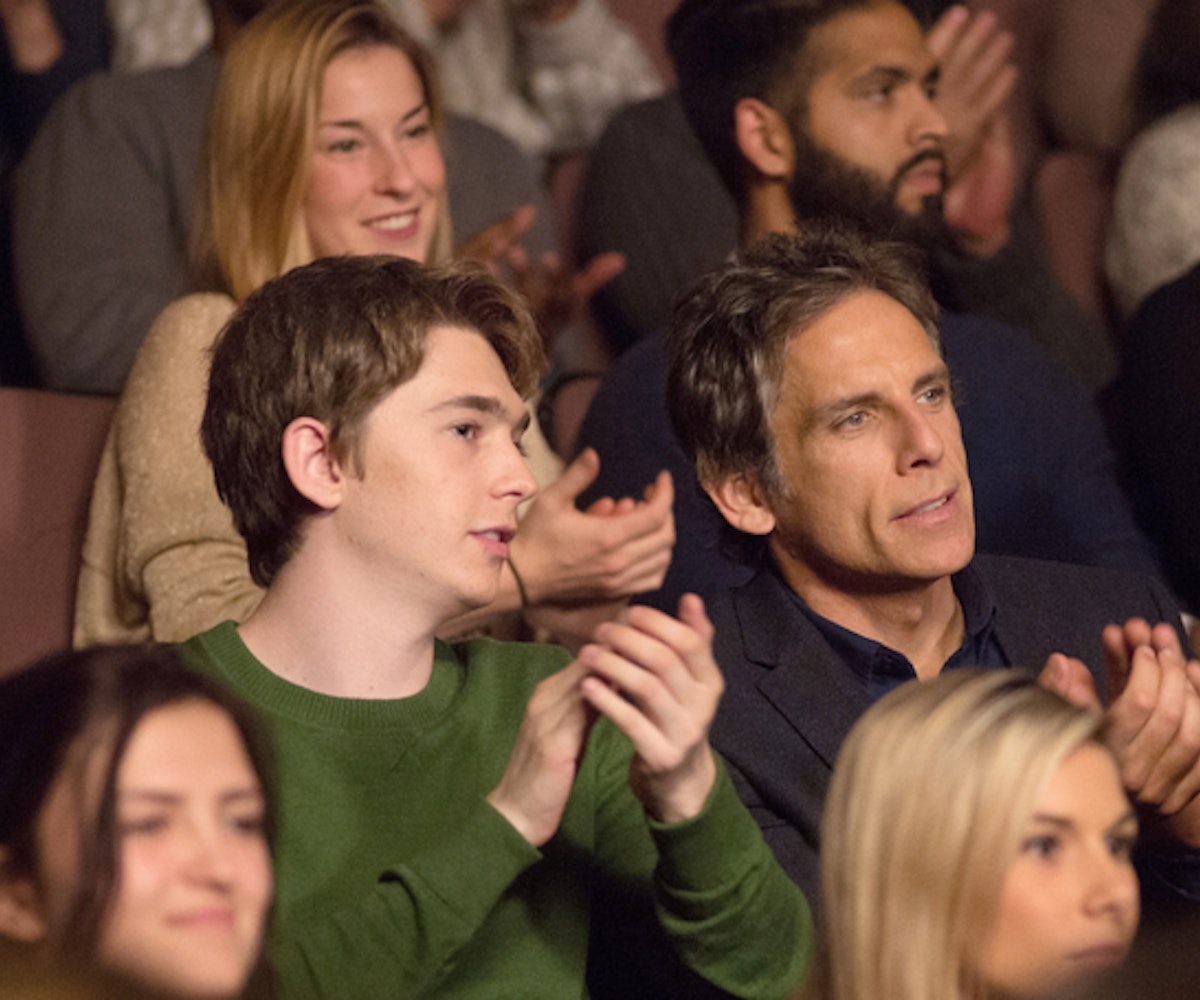 Mike White’s got ample reason to be bitter, and yet he’s not. Possessing a brilliance unappreciated in its own time is pretty much the writer and director’s modus operandi. He was a key asset to the writing staff of the short-lived but much-loved Freaks and Geeks, which help launch the careers of James Franco and Seth Rogen. More recently, HBO pulled the plug on his critically adored dramedy Enlightened after two stellar seasons. He’s fared better at the movies, penning the unimpeachable screenplay for School of Rock and taking Sundance by storm back in 2000 as an obsessive stalker in Chuck and Buck, which he also wrote. Even so, you couldn’t blame the guy for feeling like life has cheated him.

The sensation that someone else is living the life you deserve defines Brad (Ben Stiller), the middle-aged malcontent shepherding his son through college tours in White’s latest directorial effort Brad’s Status. But that’s not White, and he wants us to know it for certain. He’s as susceptible to jealousy and unhealthy competition as any of us, but, for the most part, he’s plenty happy with the life of cult adoration that he’s earned. The new film’s personal, sure, but far from autobiographical. At the Toronto International Film Festival, we talked with White about professional dissatisfaction, his read on the differences between millennials and Gen X, and the existential horror of seeing that your breakout film is the in-flight entertainment.

In the movie, Brad mentions launching a magazine that didn’t run for very long but got a lot of acclaim. That reminded me a bit of what happened with Enlightened. Am I totally off-base in making that connection?

It’s a fair question in the sense that after that was over, I had some self-pitying moments. I’ve worked on things that get well-received but don’t really land with the public in its time, and you start to feel, like, “Is this my career?” I sometimes think I’ve missed my moment—like I’ve got bad timing or something. And because I’m not always chasing commercial things, I wonder if my stuff is too off-kilter or odd. So you try to pump yourself up, like, “I’m doing something different!” Brad’s kind of like that: “There’s something valuable about what I do because I’m marching to the beat of my own drum, but maybe I’d be happier if…” You know? Hollywood creates these conversations, and I’ve gone into that headspace.

Brad ends the film with some new perspective, but it kinda sounds like you’re still figuring this all out. Did making the film grant you any clarity?

To say I have clarity would mean the conversation has been resolved, and that might never happen. It’s like, if I step back, I’m really happy that I’m able to keep doing this at all. I never thought I had a populist streak in me, anyway. And movies are a very expensive way to express yourself. That I was able to get this movie made, or Beatriz at Dinner, or other stuff, I feel very fortunate. But to answer your question, there’s anxiety when the movie’s about to come out, whether people will like it, but the movie itself has the solution to your own anxieties about it.

Enlightened was partially based on your past experiences, so I’d anticipate a lot of viewers trying to find you in Brad’s Status as well.

For me, these are personal movies. They’re not necessarily autobiographical—I don’t have a kid—but in terms of the themes and ideas... That’s where I get the energy to write it, if it’s something I’m wrestling with in my real life.

One of the most curious characters in the film is Ananya, the millennial who gives Brad a reality check. I couldn’t quite tell what to make of her. What’s your opinion of the millennial generation?

At some point in the movie, somebody needs to be like, “Get a grip, man. You’ve got a lot.” She holds up the mirror and shows him that his issues are very rarefied in the grand scheme of what the world is contending with. I like the idea that in this movie, it’s the youth that has some wisdom and the adults [who] are feeling lost.

The generational divide is made even more glaring by the fact that Ben Stiller’s something of an icon for Generation X.

I do think there’s something about my generation, being alive for social media and seeing the beginning of the Silicon Valley boom, that this was a time when people all around you were winning the lottery, career-wise. Some people might not be much smarter than you, they might not come from a fancy background, but they’d suddenly be able to retire at 40 and buy a house. With social media and the way we curate our lives for each other, there’s an unease about: “Should I be satisfied? Should I be striving for more? Is it enough to be a millionaire? Should I try to be a billionaire?” There are so many different ways to live. That’s the lesson of the story, if it’s got one: If you’re constantly looking for some proof of success in the external world, it’s a sucker’s game.

You mentioned you don’t have a kid, but with your father, did you ever feel like you were on the other side of the dynamic between Brad and his son? That he was intimidated by or resentful of your accomplishments and potential?

My dad had very flawed parents. He really tried hard to learn from their cautionary example. I had a much better parentage than he did, and because of that, I was more comfortable in my own skin. I had less of a struggle, and my dad had a long, complicated journey. He was an evangelical [ed. note: White’s father was a longtime ghostwriter for televangelists Jerry Falwell and Pat Robertson], and then he came out. It was tough. I wouldn’t say he was jealous, but there were times when he looked at my life and saw how much easier things were for me. I don’t think he resented it, but it did make him think about his own life. He might have wished that his growth could have come earlier, so he could reap the benefits of being able to be a full person, not make the same mistakes he did.

School of Rock’s gotten a second life as a musical on Broadway. How do you think the musical relates to your original script?

It’s definitely different. I was not involved in it, but I’m rooting for it to continue succeeding. What’s satisfying to me is that I kind of approached writing the movie like it was the book of a musical, because I knew there would be musical numbers. It’s a movie-musical, but I always kind of thought it might work well on stage.

I’m a real fan of Chuck and Buck. How do you think the film has aged since 2000? What’s its stature today?

It’s weird you should ask me that. On my flight here from L.A., it was one of the movies you could watch on the plane!

My follow-up is in two parts. One, who in their right mind would watch Chuck and Buck on an airplane, and two, how did you feel about that?

I was stunned! Someone sitting next to me swiped past it, and I was like, “WAIT.” That’s so random because it’s really not an airplane movie. If I was on a flight with someone who happened to land on that and then I walked by them in the aisle, I think they might have a heart attack and die.