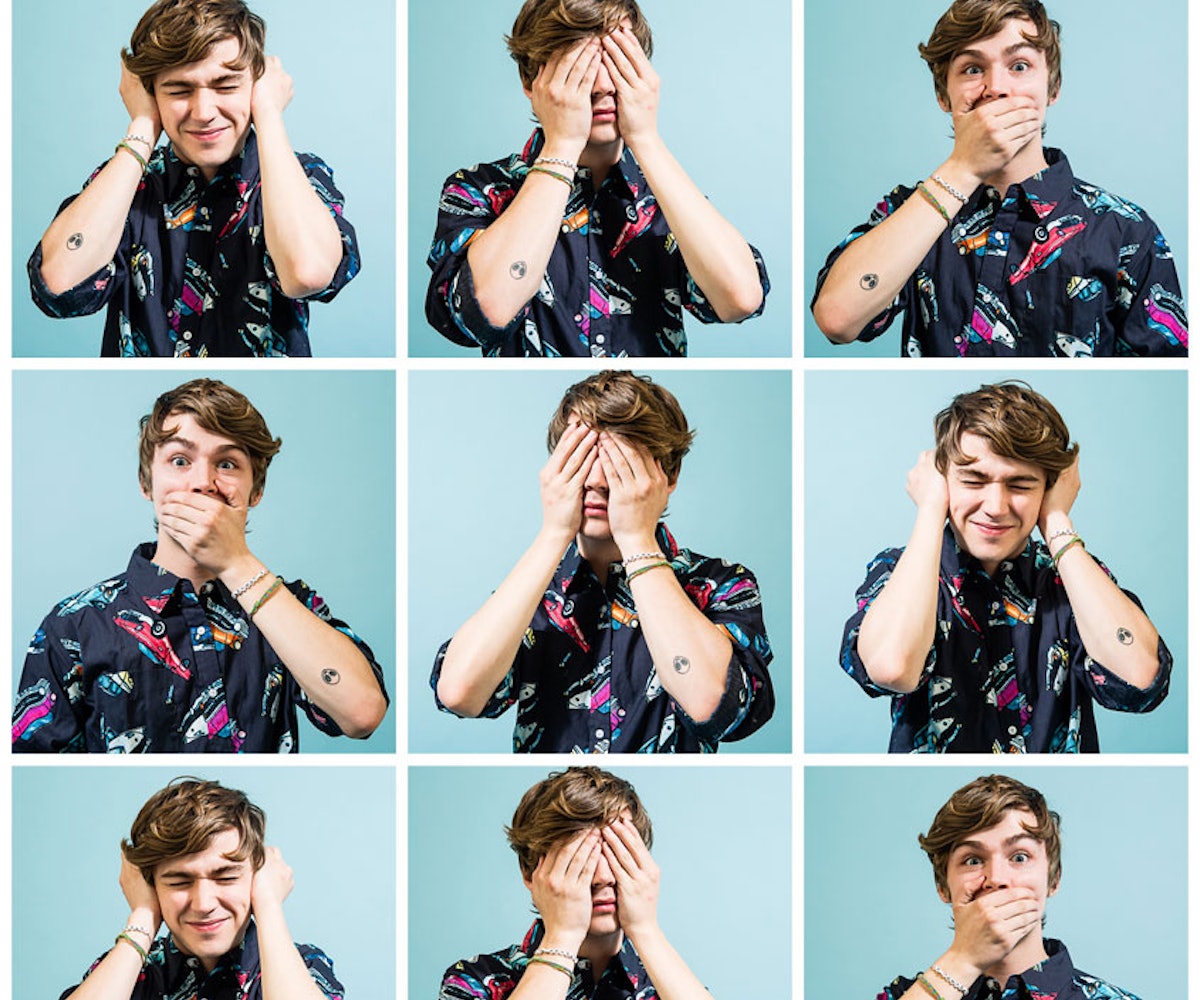 In his new film Nerve, Miles Heizer gets sucked into the darkest corners of the internet where he and his friends, played by Emma Roberts and Dave Franco, participate in a seemingly innocent virtual game of truth or dare. The game quickly escalates, as an anonymous group of "watchers" manipulates their every move. "Nerve is basically about people doing dares for money," says Heizer. "And I feel like that’s very much a thing we already do: We just do crazy things and put it up just to get attention or fame."

It's an interesting choice for Heizer, who grew up on the set of Parenthood—albeit one that will introduce him to a wider, more mainstream audience. Like most 21-year-olds, he was basically born and bred on the worldwide web. In the gallery, we talk to Heizer about all things internet. Oh, and we also had him pose as emojis, so there's that.

What have your experiences with the dark side of the Internet been? Or what do you feel like they are?Well, I definitely feel like there’s a lot of terrible things on the Internet, obviously. You can really pretty much find anything on there. It’s pretty awful. And the crazy thing is that we don’t even access that much of it–it’s like the dark web or whatever. It’s the other Internet that we don’t even access.

Are you big on social media?Oh my gosh, I’m like humiliated by it. My actual biggest claim to fame is that–basically this sounds awful and really pretentious–but my Twitter is verified. And if you’re already verified on Twitter, then your Vine is automatically verified. And people have told me that I look like Dane DeHaan—it’s kind of a running joke at this point. So the name 'Dane DeHaan' wasn’t taken on Vine so I have like a verified Dane DeHaan Vine account now. And I get people mentioning me all the time like, "Love you Dane DeHaan," with fan photos of him.

Did you get any good life advice from anyone that you’ve worked with? Craig T. Nelson, who played my grandfather on Parenthood , gave me a lot advice at the end of the show. I’m really insecure and I get uncomfortable with things and he gave me a lot of advice about that. He would say, "Don’t think about that," and, "Ignore this," and "If you feel uncomfortable in your body, you should go take a dance class or something to try and get more in tune with your body." Don’t just accept being uncomfortable and accept anything—go out until you don’t feel that way.

What advice do you have for those who are growing up and getting to know themselves?My advice would be really dramatic and generic, but ignore everyone’s opinions of you that have absolutely no effect on anybody–like people trying to make fun of what you wear or the music you like. It’s so, so stupid when you really think about. Just do whatever makes you feel comfortable with yourself because you’re never going to find that from other people. Even if someone tells you that you look incredible, if you don’t feel good about yourself, you’re not going to believe it.

What was your best late-night internet purchase of all-time? I wore it here today, actually—an alien sweatshirt. I bought on SHOP JEEN really late at night. I think that’s probably my best conscious purchase.

What is your favorite GIF?That’s so difficult. My favorite one is probably the one of the little bubble—you can text to it to someone and it looks like you’re typing but it never goes away. It really confuses people... That’s probably my favorite.

What is your favorite Tumblr?    Ironically, I never go on Tumblr.

Can you create a three song playlist off the top of your head?I always think of like classic songs I really like. I would say "My Place" by TWEET, "Just Another Diamond Day" by Vashti Bunyan, and "It’s Not My Party" by Diamond Rings. Oh man, I’m gonna look back at this and regret those three choices.

Did you have a MySpace?Of course.

Who was in your Top 8?I know my sister was for sure. I think there was a moment when I had Vans in there. Oh, and Tegan and Sara was definitely in my Top 8; I was really into the Tegan and Sara thing. Obviously, my friends from middle school who I don’t even talk to anymore. This girl Ellen Marlowe was definitely in my Top 8. Tom was in my Top 8 when I first got it, but I wasn’t future enough to know that you should have obviously kept Tom in there. I was like, "I don’t even know who this is."

Describe what you do in 140 characters or less.Wake up very late. Contemplate why I woke up so late. Eat. Listen to sad music. Sit at home and try to fall asleep. And watch TV.

What are some things you would never post on Instagram?I have some actual embarrassing pictures I would never put up. One time, I stayed at my friend who's a girl's house and I was like, "Do you have shorts or something?" and she gave me these pink silk shorts. There’s this picture of me in them. It’s like really depressing. I would never put anywhere. That’s a really bad one.