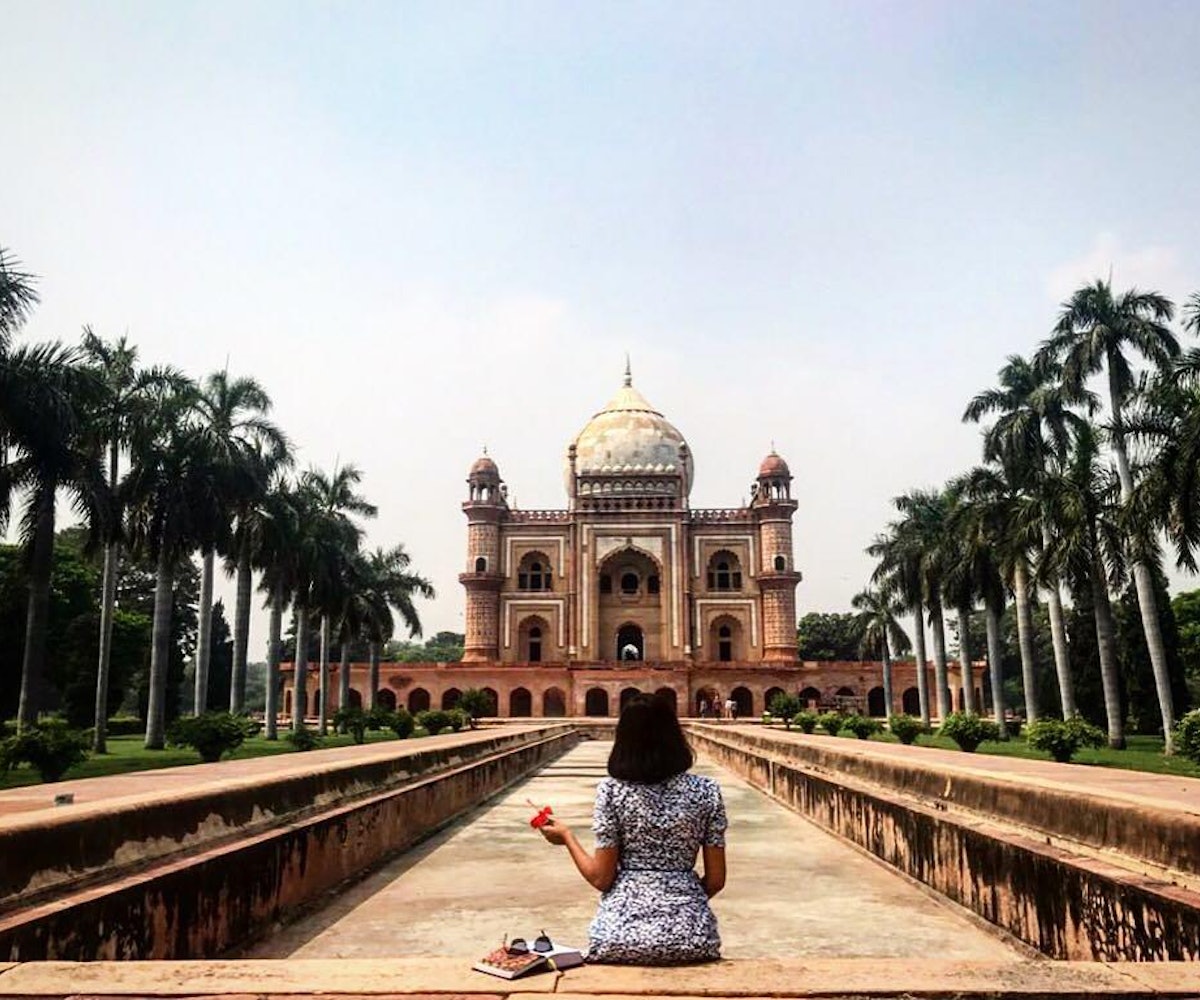 Mindful traveling is often summed up as: don't be an asshole. But it isn't just that. I mean, I hope it goes without saying that being respectful and nonjudgmental of the local culture is an absolute bare minimum for mindful behavior. But since there are still YouTube stars going to Japan and throwing Poké balls at people and uploading videos of suicide victims to 13 million followers, it's probably important to add: If you’re someone who doesn’t have the capacity for sensitivity, then you really shouldn’t be leaving the U.S. at all, or honestly even your home, until you learn how to respect other people. (And while you’re at it: Please stay off the internet, too.)

But, mindful travel is also about opening yourself up to a place, learning about it, feeling it, and generally caring about it for more than the week or so that you're visiting. I realized the extreme importance of this while on a recent trip to India.

India wasn't a destination I had thought about much before I was offered a press trip to New Delhi, but as soon as I was, I was instantly down a rabbit hole of travel articles and tourism guides trying to soak it all up before I even left for the subcontinent. Soon enough, I was thinking, How had I never considered going to India before??  There aren't many places more fascinating than one that has a population of over a billion and a rich, colorful history reaching back five millennia. Oh, and, also, some of the best food on earth. I already knew the food alone was going to make that 17-hour flight worthwhile. And, spoiler: The food was everything I thought it’d be and more. (Please see the below GIF of me so excited to pop poori with my nails that I accidentally used the wrong hand. Always eat with your right hand in India!)

And yet, as good as the food was, it wasn't what left the greatest impact on me when it came to the trip. In fact, it's hard to choose one thing that made the greatest impact because everything I encountered made me feel so many things, including: awed, relaxed, pampered, sated, overjoyed, but, also at times, concerned and complicated. Let's talk about the awed and relaxed and all that first. The press trip was sponsored by one of the most luxurious, modern hotels I’ve ever been to in my life: the Andaz Delhi. It’s a massive 400-room compound not far from the Delhi airport. Which, I know, hotels near airports don’t typically fall within the ultra-luxurious category, but, trust me, this one is special. Special how? Well, for example, there is an “elephant pathway” on the grounds that leads through the courtyard garden, past the pool, and into two massive ballroom doors specially made to accommodate literal elephants during traditional Indian weddings. Or how about the fact that right before I got one of the best massages ever, the masseuse had me pick from one of seven little stones with symbols on them. Turns out the one I picked (and got to take home) represented my root chakra (located at the base of the spine, near the tailbone), so that’s where she concentrated energy during my massage. Or, I don’t know, maybe the fact that they have a dessert bar with meringues the size off your head and three-foot-tall milkshakes. So, yeah. Are we clear on the level of luxury I’m talking about here? It is high. I felt great. Okay, cool.

But I would be lying if I didn't say it was complicated. As amazing as it is to stay in such a magical place, there is a stark contrast between the pristine, curated experience at the Andaz and the experience of being in the majority of the city of Delhi. Delhi is an extremely interesting place with awe-inspiring architecture, a long list of fun things do—shop and eat at the top of mine—and some incredibly kind people. But that doesn't change the fact that, as the second most-populated city in the world, Delhi has over 26 million inhabitants and around 22 percent of them live in slums. The India census defines the term “slum” as an area resided in, yet unsuited for human habitation; i.e. cramped quarters without proper ventilation, running water, electricity, or gas. Beyond that, more than 30 percent of children in Delhi are stunted due to malnutrition, there’s a water shortage, and, while I was there, a public health emergency was declared and school was canceled because the Air Quality Index reached the upper limit of the worst category. I couldn't ignore these things, so I felt them—deeply.

But what do we do with these feelings? They're certainly not limited to visiting Delhi. There's a real argument that all travel is ethically compromised, thanks to the fact that airplanes are so bad for the environment and income disparities and dramatic differences in quality of living are a problem in much of the world. But still, travel offers the opportunity to bolster developing economies and the travel economy can provide jobs for a variety of skilled and unskilled workers. So the question for any conscientious traveler becomes: What can I do to help? How can I stay mindful? Well, staying at a hotel like Andaz Delhi is not a bad place to start. As jarring as it is to see such a succinct illustration of Delhi’s disparity in wealth, it is inspiring to see the degree to which Andaz loves its community and wants to support it. The entire hotel operates with a dedication to using all consciously sourced products made in India—from the ingredients in the restaurant to the art on the walls to the bathrobes and soap in your room. Beyond that, they also create partnerships with local business owners and artisans who share their craft with hotel guests through experiential tours—I got an amazing calligraphy lesson from local artist Qamar Dagar.

Looking up at Delhi / Photo by beethrilll

But it's important to do more if you can. First let's talk about what not to do: Don't become a voluntourist. Instead, find reputable charities that will use your donations wisely, and set up reoccurring payments. Some great ones are WaterAid India, Children International, Greenpeace India, Delhi Foodbanking Network, and GiveIndia, which can help connect you with 200 verified NGOs that specialize in everything from education to the environment to women's empowerment. Oh, and, also, in certain parts of India, there is still a blood-supply shortage, so if you're there, donate.

If it sounds like I'm saying that maybe you shouldn't go to India, nothing could be further from the truth. Visiting other countries with relative ease is a gift of the modern era, it's just not one we should take for granted. And if you're as fortunate as I was to be able to take time off work, fly to Delhi, eat a bunch of great food, stay at Andaz, take a stroll through the Lodi Gardens, buy cute souvenirs from Dilli Hat Market, take a day trip to Agra, etc., by all means do so. But be aware of your privilege and consider how you might want to give back to this place that has just extended its hospitality toward you. And think about practicing that kind of mindfulness when you're not on vacation—America has plenty of economic disparities of its own to consider. Mindfulness is an important part of a responsible life, whether you're traveling or staying at home. So let that be your mantra moving forward: Be mindful. Do what you can. Don't be an asshole.