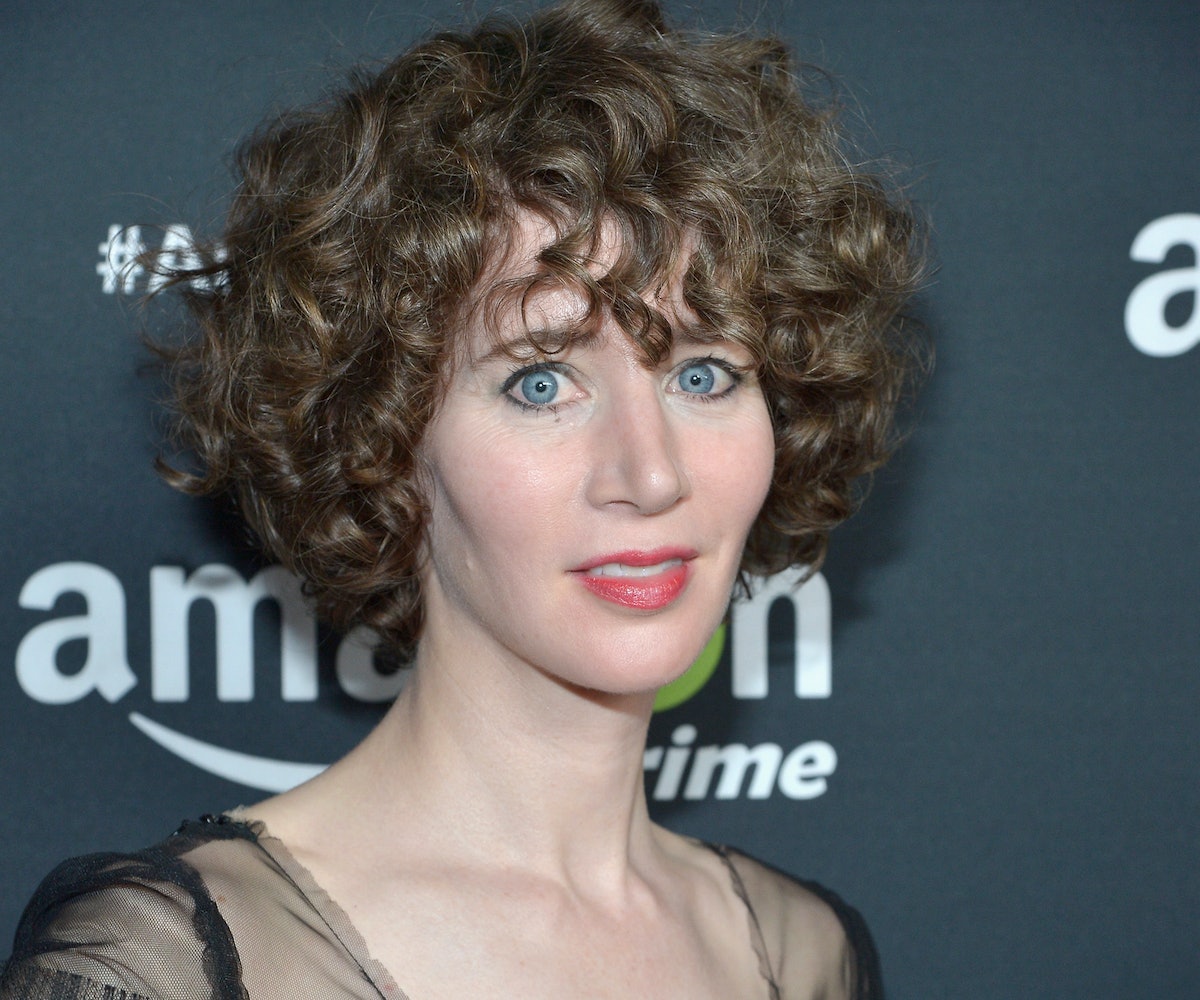 Miranda July is an artist of many disciplines, having written short stories and a novel, performed live pieces, and created an app. But it's her work as a writer and director of two feature films that stands out the most, if only because of how hard it is to get a movie made, particularly if you're a woman. July—who made Me and You and Everyone We Know (2005) and The Future (2011)—knows this struggle all too well, so she was happy to lend her support to her friend Amber Sealey's new movie, No Light and No Land Anywhere.

The film, deeply intimate and raw, follows Lexie (played by British actress), a Londoner who moves to Los Angeles in an effort to reconnect with her estranged father. Featuring one of the most unflinching sex scenes we've seen in a while, the movie, which is Sealey's third, had its premiere at the Los Angeles Film Festival and raised part of its micro-budget with a successful Indiegogo campaign. July's official role on the project is executive producer, but she sees herself more as the film's head cheerleader, and was happy to talk to us about what makes Sealey and her movie so special, the difficulty of making movies as a woman, and that very special sex scene.

How did you come aboard this project?

I’ve known Amber since I was 18. We’ve been watching each other’s careers and helping each other. She started out as an actress, so for a long time we didn’t have this thing in common, but then we did. It’s been exciting having someone I was already close with to share this whole world with. It’s rare. I’m the executive producer so basically I’m like a cheerleader, which I’m really happy to be for her. I helped with the Kickstarter campaign, which she did great on, and watched lots of cuts and gave notes. I’ve just been in and out. Right before this call, I was like, “What if I’m asked what the budget was?” I don’t know things like that!

Why should people see this film?

I think Amber’s whole career is really exciting. She’s a great voice. She’s really amazing working with actors. Both me and my husband [Mike Mills] have brought her into different jobs we’ve done to help with actors specifically. She gets performances in the way where you don’t quite understand how that happened. Even the sex scenes are my favorite because they’re so complicated. The men could just be idiots—like you could think, “Right, they’re idiots. It’s a sex scene and they just want sex.” But you do see enough of how they’re real people and how they’re vulnerable in that situation and how they’ve maybe never done this before. All that is what makes it charged.

Yeah, you don’t really see sex scenes that feel that real and kind of unorchestrated in most movies.

It’s really complex, because you’re like, “Oh wow, this is maybe what it would really be like if you decided to do this.” That kind of magic coming out of a room with three people, you can feel the sweat, you can feel the discomfort and the arousal, too. I found myself watching that scene thinking about Gemma’s body and how she is very appealing, but she doesn’t have a Hollywood body. The camera doesn’t shy away from it, and it becomes more and more attractive in a really specific way. You begin to see through their eyes instead of a generalized Hollywood eye where you would just be like, “Wait, she seems four years older than she should be.” Then you realize, “Oh yeah, there’s something really hot about her specificness or realness.” Her accent, her slightly rough quality.

You’ve made two feature films since your debut in 2005. Why haven’t we seen more Miranda July films?

I rotate. I don’t know if you read my novel, but that was the last thing I did. I don’t do movies back-to-back. It’s a cycle, so right now I’ve come around to the movie part. I’m writing my next script.

So you feel a specific need to flex all those different muscles?

Yeah, I work in a lot of mediums. I tend to rotate between them. If I’ve just written a novel, I don’t sit down and write another novel, because then it would be a really long time since I’ve made another movie. I actually feel the urgency. By the time I’m finished with this movie, it will have been a long time since I’ve written a book. I’m also doing a lot of art stuff, so that takes time.

Do you think it’s an optimistic time to be a filmmaker?

I mean I can say the same clichés. There seem to be opportunities for women in TV. It’s a little annoying. I didn’t grow up wanting to make TV, so I’m not making a TV show right now because I’m trying to figure out this movie thing, like how to work in that form. But, is this an optimistic time? It’s kind of always a terrible time for women, and I think that’s partly why it’s my responsibility to help the women that I see. I’m probably one of the only people that Amber knows that could help. I would [help] just as a fan, but I also feel like there are those people who did that for me. It’s just so treacherously hard. If you see someone who is every bit as good as a million other dudes out there, whatever [laughs]. The Duplass brothers, people who are very good friends of ours, people who just work a little bit more easily within the system because it’s a system of friends helping friends, and it’s mostly men helping men.

This movie very much uses Los Angeles as a setting, and I think you’ve done the same thing. What do you think it is about Los Angeles that makes it such a cinematic city?

Nothing. I don’t really care about the place. That’s such a better question for Amber about the way she does use the city. I’ve never made a movie that’s particularly about Los Angeles, whereas this one clearly is. Definitely, ask her that.

So you don’t care about the place at all in your work?

I don’t know. You can think about my two movies and think they’re really about cities, but they’re not. I’ve heard that line where, “The city is such a character in your movie,” but I have never said that sentence myself. I’m so involved in the people and usually their intimate spaces, like their homes. Of course, you end up shooting the city. As a person, I’m not that involved in place.

My favorite movie in high school was Sex, Lies, and Videotape which is like, what? I wasn’t married and having an affair, I was a teenager. I feel like that’s not how people really work. They see emotions that they’re curious about and often things that they are a step removed from.

When we were doing the Kickstarter, one of the prizes was that I would read a letter to your father. If you were estranged from your father, as the main character in this movie is, and always wanted to write them a letter, you could just have me reading it. I think that was one of our most expensive rewards, but a few people got it, and one was a person whose father just died, and one was a person who had never met their father. [The letters] were incredibly heartbreaking. I couldn’t get through them without being tearful, but I tried just to give them all the love that I could. I read them cold. I didn’t want it to be like a performance. It really hit me, “Oh right, this isn’t my story, but a lot of people will relate to this yearning for a father.” I imagine as you get older, that feeling changes when you get to an age where you could be a parent yourself.

Do you foresee this movie getting a theatrical release?

I’m not involved in that part of it, but just based on my own experience I imagine most people will see this movie on iTunes, regardless. Her first two movies are on there and let’s be real, most people watch movies on their computers.