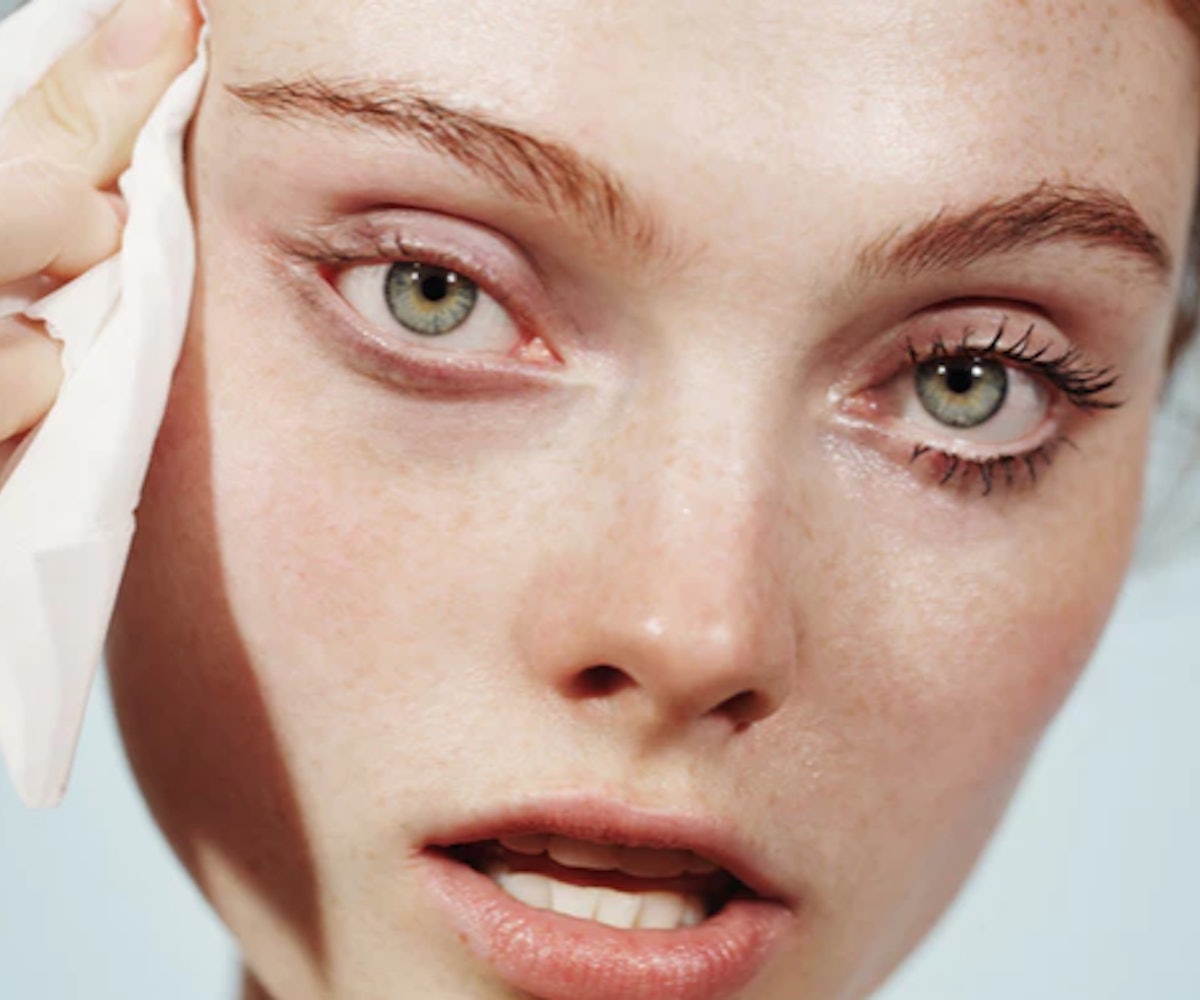 In the year and a half that I've worked at a women's lifestyle magazine, I have acquired an uncountable number of free, highly coveted beauty products. Some of these have been sent directly to me, usually unprompted, only by request if I am specifically curious about them for an article I'm writing. But most of these products are things that I pick up in our office's giveaway bins, where they go to languish, because even our beauty editors can only use so many things. I don't keep most of what I take for myself. Instead, I give these creams and serums, toners and oils to friends and family members, who are all delighted to receive them, usually exclaiming, "Oh! I've always wanted to try this!"

The fact that this delight is universal is doubtlessly due to the fact that, in the last couple of years, a cultural obsession with beauty rituals has reached a frenzied peak; my simple gift of an AmorePacific moisturizer or a Glossier clarifying mask has become a valid type of love language. And it's fascinating, really, that these intimate forms of self-care have become part of the public discourse. Whereas once, most of us were only familiar with the beauty rituals we'd seen performed by our mothers and aunts and grandmothers, we can now go to websites as varied as Into the Gloss or Jezebel (or NYLON) and see the most intimate details of people's routines. Beyond that, though, there are countless personal blogs, densely packed Reddit forums, and lengthy Twitter threads in which people extoll the virtues of this or that product (spoiler: Sunday Riley's Good Genes almost always makes an appearance).

The reasons behind skin care's recent ubiquity are many. In part, it is because of the relative democratization of capitalism: While consumers were once only able to get the creams and lotions available at their nearest pharmacy, now they can find the most obscure Korean toners or French lip balms on mass-market websites, available for purchase with just a single click. (I am old enough to remember reading Vogue and tearing out pages in which models would recommend their must-have items that were only available at French pharmacies; I promised myself one day, I would get to Paris and buy my own tubes of Biafine and bottles of Nuxe oil. By the time I did make it to Paris, both those products were already available on Amazon and at New York drugstores. I still loved visiting French pharmacies, though.) Skin care, then, might still come at a cost, but it is attainable for those able to pay shipping fees, even if they can't quite scrape up the money for a flight to Seoul.

Social media has played a role in skin care's importance, as well. The Instagram "shelfie" is a way of communicating an aspect of who you are to the world, and those face- and sheet-mask selfies that were everywhere in 2016 were yet another performative way of showing you were participating in a cultural moment bigger than yourself. That this type of performance of self-care was happening—and continues to happen—during a time of political turmoil in which many women feel their safety explicitly threatened is no coincidence. Skin care and other forms of self-care, which often fall under the umbrella of "wellness," became tied up with the idea of political resistance. While there is a very real aspect to this that is more "hashtag resistance" than actual resistance, it is still undeniable that huge numbers of women find comfort in using literal balms to ease their psychic suffering. Does all this make the popularity of skin care complicated? Sure. But does it make it worthy of outright contempt? I don't think so.

In so far as the ubiquity of the skin-care conversation is undeniable, the backlash was inevitable. And today it arrived in the form of Krithika Varagur's Outline article, "The Skincare Con." Varagur's problem with the rise in our obsession with skin care is a familiar one to anyone who has read screeds against the popularity of other wellness-adjacent topics, like "clean eating" or crystals or salt lamps. Varagur wants all those who are obsessed with skin care to know that, well, they're fools. They're being scammed by beauty conglomerates to spend their hard-earned dollars on totally unnecessary products that are at worst dangerous (acids burn!), and at best a fool's errand, since, writes Varagur, the idea of "perfect skin" is bullshit, because "it doesn't exist," and "the idea that we should both have it and want it is a waste of our time and money."

This critique of skin care, and of the beauty industry at large, is not a new one. There are many people who have argued, as Varagur does, that because "our skin has withstood millions of years of evolution without the aid of tinctures and balm," we're only meddling with what is natural in order to attain some evolutionarily unearned ideal of perfection. This is a specious argument, however, not least because many of the stressors which negatively impact our skin (pollution, stress levels, diet) are modern-day problems for which we have not, um, evolved to treat with nothing more than our own immune systems.

But Varagur doesn't seem to care that much about people who use skin care to treat things like redness or persistent acne; rather, she seems more critical of those who use skin care to do things like lessen the appearance of fine lines or rough texture. And she isn't just critical, she tacitly mocks those who have used products incorrectly and wound up with burns or abrasions on their faces. A lengthy section of the article is devoted to horror stories from a Reddit thread, in which people describe using, for example, combinations of glycolic acid and Tretinoin, a forbidden combination which will result in a painful reaction. But citing experiences like this, or one in which a dermatologist tells Varagur about a patient who used a facial scrub, a loofah, a glycolic acid, and a retinol, is not really helpful because these types of combinations are known to be hazardous. Using them to suggest that skin-care acids are dangerous is akin to suggesting that, because toothpaste is poisonous if swallowed in high quantities, nobody should ever use it to brush their teeth again. (And, hey, haven't our teeth "withstood millions of years of evolution," as well? Maybe we should stop brushing our teeth, too!)

The patronizing attitude that Varagur strikes here, as she insists that every woman who has bought a toner or moisturizer is just being duped, is misogynistic, even if she tries to frame it as being pro-woman, since her goal is to free women from the constraints of capitalism and end a slavish devotion to a societal merit system based on looks. Perhaps her argument would go over better if skin-care regimens were something only enjoyed by the economic elite—but they're emphatically not. Taking care of ourselves is something that transcends class, racial, and ethnic boundaries—in fact, that is one of the most interesting things in the rise of skin care over the last couple of years, that beauty products from all over the world can now be experienced no matter where you are. Is there something troubling about the fact that this is driven by capitalism? Yes. But there is something just as troubling about Varagur assuming that most other women aren't aware of the inherent flaws in existing and participating in a capitalist society. Like, yes, it would be great if looks didn't matter at all and if money wasn't the driving force behind so much of what we do, but to pretend that this isn't true could, in effect, prevent women from being able to change the system from within. Women aren't idiots—even those women who want clear skin. So maybe give them some credit for making informed choices, and knowing where their money is going, and deciding it's a worthwhile expenditure.

There's another important class-based aspect of the rise of skin care. Its ubiquity has meant that it's possible for people of all economic stratum to gain access to products that used to be reserved for the very wealthy or otherwise elite (like those models I envied, who got to shop for lip balm in Paris). Not all skin care is expensive. The Ordinary offers formerly hard to find products at incredibly low prices, making smoother, clearer skin a possibility for those who can't afford Sunday Riley. The ability for more and more people to feel comfortable in their own skin—and at a reasonable price—is revolutionary; it makes a huge difference in a world where people are judged for their looks, for the clarity of their skin, for the cleanliness of their hair, for the straightness of their teeth. I doubt Varagur would stigmatize someone for getting braces or for shampooing their hair; implementing a basic skin-care routine is not so different.

But easily the most frustrating aspect of Varagur's critique, and most of the recent wellness critiques, is the condescension toward women who are exercising their purchasing power and buying things that make them happy—even if that happiness is situational, ephemeral. Not everything, after all, needs to serve some definite, known purpose. Perhaps it makes one person happy to spend $40 on a hunk of rose quartz, to keep by her bed. Perhaps it makes another person happy to spend the same amount on a moisturizer that makes her skin feel like the meltingly soft inside of a cat's ear. Perhaps these are the kind of things that women can figure out for themselves, perhaps women aren't so easily conned after all. There's no doubt that many skin-care products make promises that can't be fulfilled. There's no doubt that much of beauty writing and recommendations is pure propaganda and that happiness can't really be found in a bottle of stinky acid from France. But there's also no doubt that most women can figure that out for themselves, and if they enjoy the community that has grown around the skin-care conversation, and feel like this is one way in this chaotic world in which they can take care of themselves, then where is the problem?

It's understandable that the sheer amount of choices on offer in the skin-care world can seem threatening, like a bottomless chasm down which women will constantly be throwing their money in pursuit of something elusive. And I get that, but I also know that in the past year, despite being surrounded by and trying just about every beauty product under the sun, I now rely on fewer and fewer products myself. I use one toner and one serum and one moisturizer, all of which I buy for myself. I wear less makeup. But because I spend my days on the internet, surrounded by noise which reminds me of how many men have taken advantage of women, and how much society will do anything to keep us down, I take pleasure in the conversation around beauty, even scrolling through Sephora reviews as a self-soothing technique (and rarely buying anything). But I still love giving people products, and I love hearing about the myriad ways women are finding to take care of themselves in this imperfect world. Perhaps the problem with Varagur's view of skin care is that she thinks what women are looking for is the achievement of perfection, when all we are really seeking is a reliable way to show ourselves love when so many people around us are telling us we're worthy of little more than contempt.