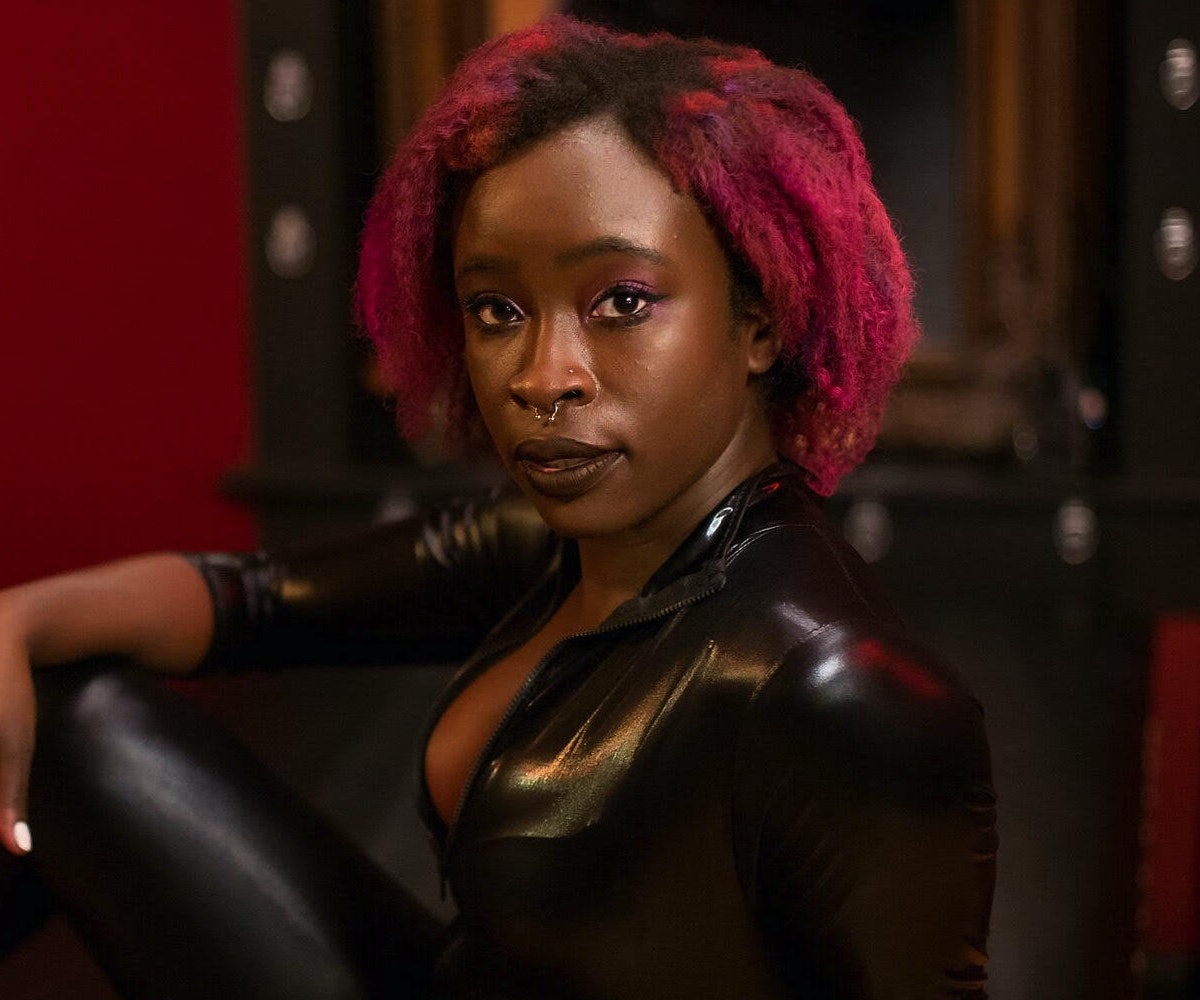 If you’ve ever had a desire to combine the heady with the hedonistic, then Chicago-based dominatrix, Mistress Velvet, is the person for you. The 29-year-old Scorpio (“I think it speaks a lot to why I’m at a domme”) has her masters in gender studies and currently works at a nonprofit teaching sex ed during the day, but otherwise is known for her unique approach to domming, which sometimes includes a reading list of black feminist academic texts. From Audre Lorde (if they think of black women as “angry”) to Patricia Hill Collins (“if they hypersexualize me”), she has a lengthy list of authors who simultaneously stimulate and educate her male clientele about the systemic oppression experienced by black people, particularly femmes.

Mistress Velvet wants to make it clear that her practice is only one dimension of the work she does (“I didn't even realize it was a form of sex work at first”), as she also is a vocal advocate for sex workers’ rights—especially in light of the conversation currently surrounding it. Controversial proposals like FOSTA (which has already passed in the House) and SESTA (which will be voted on in the Senate this coming week), that conflate autonomous sex work with sex trafficking (which is done through force, fraud, or coercion), has the potential to put the livelihoods of some of the most marginalized in jeopardy. As Mistress Velvet notes, “There's a lot of privilege in the type of sex work I do,” so fighting the white supremacist patriarchy through intersectional feminist theory is really just the beginning.

Read our interview with her, below.

You had a friend who mostly taught you the basics of domming, but did you also research stuff online? How exactly did you break into the doming world?

I will say it was very difficult. In my entire four years of doing it, I really only got to where I wanted to be within the past two years, truthfully. It is harder if you don't have someone to be there for you as a support, to answer your questions, and it’s also a risk for clients to just have a session with someone who isn’t really trained. I had to market myself a lot, like, “I'm a beginner domme, I need someone to practice things on,” and the clients who were okay with that would reach out to me.

So how, exactly, did you begin making your subs read feminist literature?

It kind of happened by accident. One of my favorite clients had a lot of baggage and was doing a lot of thinking about his identity as a white man and started to realize his privilege over the past few years. I believe he had a relationship with a black woman a few years prior—either as a domme or not, I can't remember—and she exposed him to a lot of things around his privilege. So when he came to me, he was already like, “I don't respect black women. I need to figure out how to be better to black women.” But this seemed like kind of a burden—like I don't want to hold your white guilt for you. So he paid for me to come with him on a business trip, and I took my iPad, which had my college readings on it. And I was just like, “You talk a lot about these things, and I also have a lot of feelings about black oppression as a femme, and these writings have helped me.” So I gave him an assignment: “This is a really important piece to me, so why don't you read this and write about it?” I think it was good for him especially because, in this particular piece, the author was talking about how we can overcome black oppression. So he finally was able to read about his privilege. He might not be able to change his identity, but there are things he can do to work against that, and I think he really needed that. I realized, as he's reading me his essay, that this man—in his late 40s, early 50s, super-rich man—is reading black feminist theory, and it's awesome... But it wasn't necessarily like I came up with this idea of making [these readings] a part of my identity as a domme, as much as it was just something that was good to do.

Are a lot of your clients are like that man? Are they people who vocalize that they want to recognize their privilege and see how they can improve as people overall?

Truthfully, a lot of them don't even know I necessarily do these kind of readings. After I had this session with this guy, I decided that this was going to be a huge part of my thing, but what I learned quickly was that most men don't want this. They don't want to interact with their guilt or think about the fact that they are racist, and so it is not really profitable. But I think [it’s important, because some] people are attracted to me because they fetishize black women... For those that seem to [be operating] around the idea that black women are powerful, I gauge if this kind of training is an option.

I would maybe even reframe that question, because I think BDSM is diverse. I think sometimes with questions like that, we're thinking, “How can we add more people of color to these spaces?” But people of color already identify heavily with these spaces. But because the mainstream or normalized spaces don’t feel safe, we create these types of spaces for ourselves. Like, if I go to the play party, it’s going to be POC-only or POC-centric. And if we're in our own spaces, then the more popular, “normalized” spaces don’t have people of color. So to diversify these “normalized” spaces, I’d say center people of color. I certainly don’t feel safe in primarily white spaces, so I think if there’s a way for us to feel safe—so that we could all enjoy in those spaces together and know that we can be valued and be heard—that’d be great.

One last question about debate currently happening around proposed legislation like FOSTA and SESTA, which per ThinkProgress would hold websites “criminally and civilly liable for posts about sex work or sex trafficking.” FOSTA has already passed in the House, but, for the most part, the amended language of the bill makes a dangerous conflation between sex trafficking and sex work. Tell me about how you and other sex workers you know have been responding to it.

I am more for decriminalizing [sex work] as a person that doesn't trust cops or, like, the justice system—so we can do our thing safely, but I'm not sure that I want the government regulating it. [The Backpage stuff] was so upsetting because while this legislation is going to affect a lot of sex workers, it will really impact the most oppressed. When it first closed, the people who were affected the most were street-based, full-service, black, trans sex workers, and so I think that we really need to put a face to sex work. People talk about it as if it's just criminal, like you're just doing something criminal. But these are people who are taking care of their family and their children. And now, all of a sudden, they've lost access to income because people are imposing their own morals onto others. Some sex workers are doing sex work for a number of reasons, maybe because they’re finally getting paid a little bit more, versus minimum wage. I really wish we could just humanize and decriminalize sex work, so we can just be seen as people trying to take care of ourselves and our families. It’s not dissimilar to why we have any other job.

NEXT UP
Beauty
This Viral Black Honey Lipstick Dupe Is Only $5
Beauty
Charli D’Amelio and Landon Barker Wore His & Hers Goth Manis To The Grammys
Entertainment
Beyoncé Is Now The Most Awarded Artist In Grammy History
Entertainment
Harry Styles' "As It Was" Grammy Performance Featured A Silver Tinsel Onesie
Style + Culture, delivered straight to your inbox.