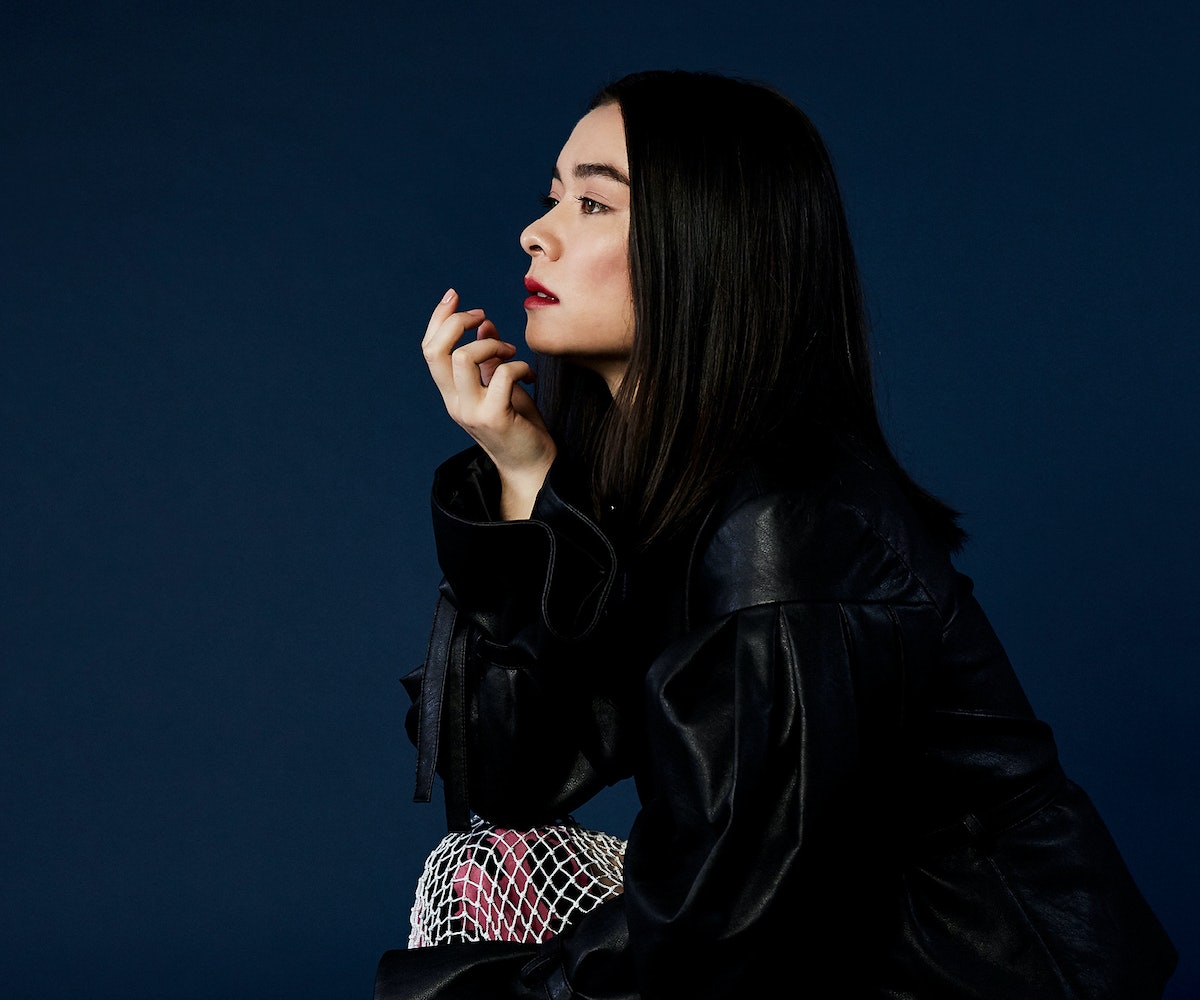 Just after we start talking, Mitski and I find ourselves caught in an ouroboros of apology. Or rather, I’m stuck in a self-conscious, deflecting circle jerk, repeating, “Well, I really shouldn't complain,” as Mitski attempts to explain that the power of complaining is something we need to embrace. We just need to make sure we're doing it around the right people.

“I’ve come to realize so few people understand our experience, that oftentimes what we say as women comes off as ‘complaining,’” Mitski says, reassuring me. “So I've learned to only complain with other female singer-songwriters—a really specific group of people that get it. That’s what’s different.”

It’s been several years since Mitski and I last spoke. Back then, she was living in Brooklyn, fresh off a national tour, and riding high off of the buzz generated by her critically acclaimed 2014 album, Bury Me at Makeout Creek.

Nearly four years down the road, Mitski reflects on that time with a single word: "crazy." A lot has changed since then, but she still feels the shadow of her breakout record looming over the release of her fifth studio album, Be the Cowboy. It was following that album that Mitski was saddled with the journalist-created persona of “emotional female singer-songwriter," and it’s been difficult for her to shake off that designation, and recast herself in a way that's more reflective of all the elements of her artistry.

“I hate how it has to be ‘confessional,’ ‘emotional,’” Mitski says; she's not a fan of the way these words convey that she is an unpolished amateur, rather than what she really is: a classically trained, experienced professional. “[In my work,] I am expressing my truth, but it doesn't mean that it's unrefined. It takes a lot of craft to put together something that's truthful and that reaches somebody else's emotions,” she says.

And it’s an understandable frustration. Despite being one of contemporary rock’s most articulate voices, Mitski is still subject to this type of marginalizing projection, despite the fact that her work has been rightly lauded for its candor and self-awareness. And for Mitski, who sometimes questioned her purpose in a world not built to cater to people like her, the slight of feeling continually misunderstood can border on infuriating, since there's little doubt that it's not a judgment based in the music establishment's blindness toward anyone who isn't a white male.

The music industry gatekeepers who seem to be unable to extricate their own—white, male, middle-aged—perspectives from Mitski’s craft, vision, and intention have continued to assign similarly "emotional" narratives to her subsequent releases. It can feel like she’ll never escape the assignation of being a lonely, lo-fi musician crafting raw ballads of love, loss, and heartbreak in her bedroom. That her work will never be seen as anything other than a diary-esque result of her feelings flowing freely. "It makes it seem like I'm a vessel," Mitski says, shaking her head. "I think that's what it really comes down to. It's gendered because it makes me into a vessel for creation instead of the creator.”

Eager to emphasize that she’s a long way away from the time when she “was emerging, and just bare a lot”—i.e. no makeup, messy hair, and a wardrobe exclusively comprised of T-shirts—Mitski expresses dismay at the fact that things don’t appear to have shifted much in the years since Bury Me at Makeout Creek was released.

"I'm a woman, and people didn't know [how to define a] female performer who wasn't performing femininity," she sighed. "So there was this perception of, ‘Oh, wow, she's an unearthed gem, she's so raw.’" So starting with Puberty 2, Mitski attempted to subvert this critical consensus in the only way she knew how: By writing narratives or employing characters that were obviously works of fiction—completely divorced from the little people did know about her intensely private personal life.

"I just wanted to make a point of the fact that it is not all completely confessional,” Mitski explains. “Like, 'I'm a wife with a husband.' In my real life, I don't have a husband, but I'm writing about this and, look, you're still able to relate to it, because I'm crafting a song and I'm expressing an emotion."

However, she notes that this conscious reorientation hasn't come without ample misunderstanding and a certain level of condescension, as she’s noticed a substantial change in reception since she began using characters and narratives in her songwriting.

“I'm reading reviews that are saying, ‘It's no longer personal for her. It's no longer emotional,’” she sighs. “Like, why does it have to be one or the other? I'm just using all these techniques or tools in order to express emotions that I actually had. It's just that, sometimes, something that actually happened to you doesn't serve the emotion you're trying to express.”

Mitski chalks this disparity to the fact that musicians tend to be viewed through a different lens: as artists whose work must be directly informed by their own traumas—but this is also an approach that has the potential to suck the life from you. So in an industry where self-preservation is paramount, she's learned to take another approach—laboring over the bits and pieces of fictionalized inspiration jotted down on her Notes app that she deliberately spends hours trying to puzzle into a cohesive narrative.

“It's something you craft,” she explains. “It takes a lot of craft to put together something that's truthful and that reaches somebody else's emotions. I, in my work, am expressing my truth, but it's removed [from my immediate universe]."

And it’s this quality that also likely what makes her a sought-after songwriter for other artists—though Mitski is hesitant to divulge on details on who she’s been working with. But what’s her rationale behind crafting stories for other people? Surprisingly, it’s not rooted in the desire to re-establish her voice elsewhere, but within a more practical compulsion.

“I don't think I can do this at quite this pace 10 years from now, or 15 years from now,” she says quietly. “What if I get sick, or what if I get too tired, what if I just don't want to do it anymore? Music itself doesn't sell anymore. Like, my records don't really make me any significant enough amount of money, and I don't have any other skill or trade.”

It’s a concern I immediately identify with—those feelings of instability that tend particularly to haunt the minds of the children of Asian-American immigrants, who have been told from the day they’re born that money is the most important indicator of social status and success. So what happens when you pursue a dream that’s, as Mitski puts it, “a little too esoteric?”

“I don't assume I'm going to be okay, and maybe that's who I am because maybe it's being an Asian woman, but I'm very aware of the fact that my position in the world is not secure,” she says, “I have to secure it for myself.”

It’s at this point, we begin to talk about the people we know—the white, cis-hetero men from affluent families who continue to shrug their shoulders at the idea of success and hard work, the ones who continue to somehow mysteriously survive, and make the decision to take the path of least possible resistance, in the music industry.

“Our existence is not considered necessary, so we have to make ourselves necessary,” Mitski notes. “We can be very easily kind of like extracted from society, you know?”

“I hate the idea of us having to make ourselves useful,” I complain to her—a statement to which she calmly replies, “I think I very much have a deep need to be useful.”

“That's very much tied to my identity, like I couldn't allow myself to simply exist,” Mitski continues. “I cannot ever imagine myself just existing and feeling fine about it. I need to be doing something for somebody else, or I need to be necessary and needed.”

"Do you think that’s a product of our upbringings? Our perceived place in society?" I ask.

Mitski pauses—a shadow passes over her face, before finally saying: “I just can't believe you can think you have innate worth… That's something I never had."

Be the Cowboy comes out August 17 via Dead Oceans.