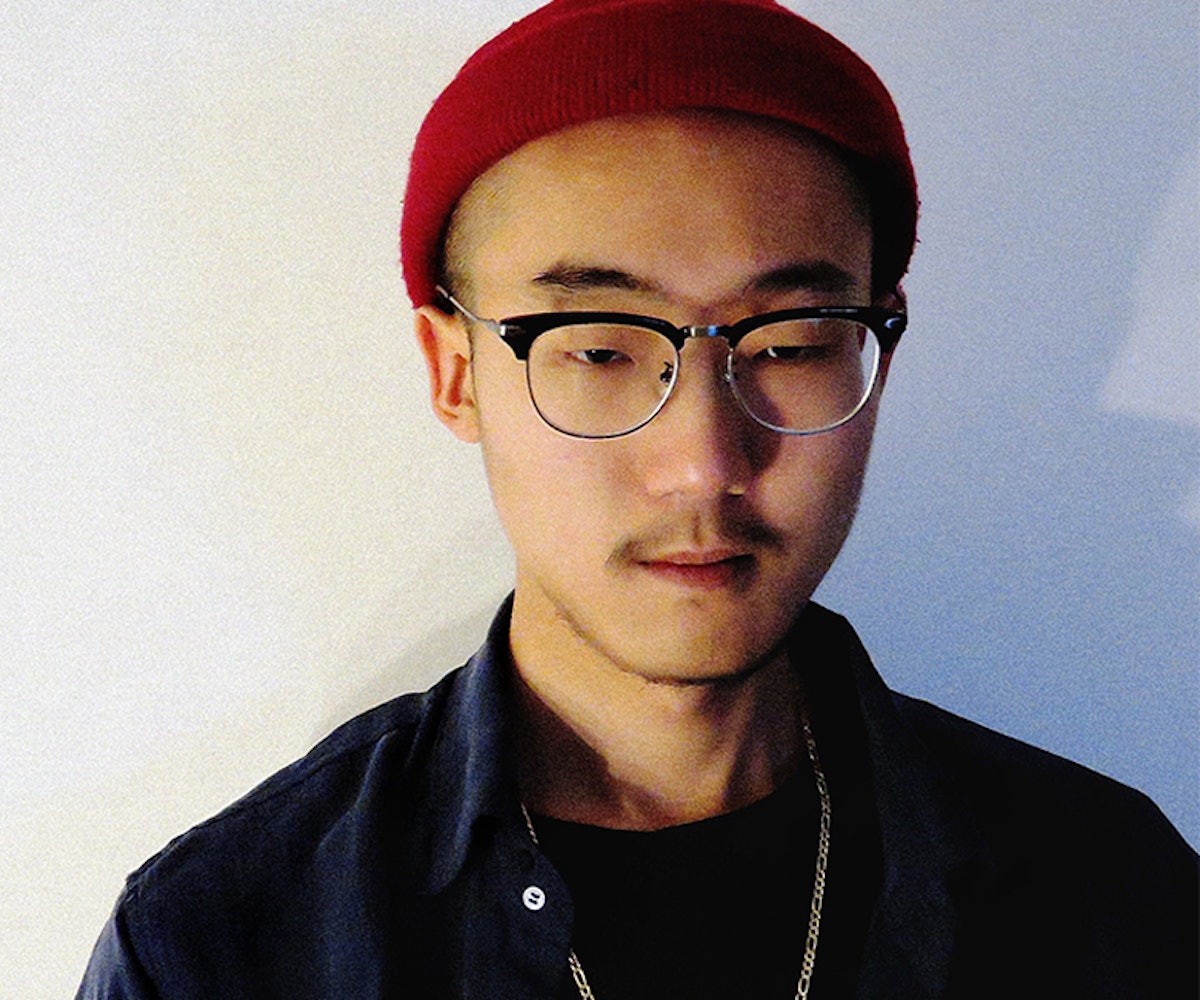 The music of mmph is as hard to pin down as his nom de plume. The Boston-based producer, born Sae Heum Han, collates a series of seemingly disparate references: the rattling percussion of deconstructed club tracks, oceanic synth washes reminiscent of Oneohtrix Point Never's electronic experimentation, naive melodies straight out of a Studio Ghibli soundtrack, and, on breakout single “Sun God", a hypnotic steel drum line that brings to mind early-period Jamie xx. It's hard to chart the trajectory of a mmph track, as Han's approach to form and structure leaves the listener with little to hold onto through a barrage of disorienting noise and disjointed phrases. His debut EP, Dear God, out today via Tri Angle, presents a musical vision that is unnerving, iconoclastic, and utterly intriguing.

It's not just fans and press who've been drawn into Han's idiosyncratic world. He's produced for indie darlings Lauren Auder and serpentwithfeet, and even orchestrated “Doing The Right Thing," a highlight from David Byrne's comeback album, American Utopia. The Byrne track, in particular, portends an exciting future for the 24-year-old: a Bang on a Can-like string arrangement builds into a fully fledged synth freakout, a spiritual descendant of OPN's era-defining “Boring Angel." We're undeniably excited to see what Han comes up with next, so we got on the phone to discuss the genesis of the project and the emotional narrative behind his EP.

You initially studied classical cello at Berklee College of Music. At what point did you realize that electronic music was your calling?

I think playing other people's music was less appealing to me when I got to Berklee—everyone was doing their own stuff. Although I love classical music, I felt like playing pieces 200, 300 years old wasn't the now. And the fact that I could be creative and transform sounds that I had in my head to physical spaces was very appealing.

Do you feel like the rigor and mindset around practicing classical music carried over into your production?

Definitely. You have to practice a lot when you're doing classical music. Even just getting intonation perfectly takes hours and hours of practice. What I found being around people that do electronic music is that they don't think of practicing so much. Production is thought of as something simple and very instant. I felt as though there was a lack of practicing, like you don't just open up a session of Ableton and think, Oh, I just gotta kinda explore this. You need to spend so much time getting comfortable with the instrument itself. So, it definitely carried over.

How did you come to craft your signature sound?

When I first started playing around with electronic music, it was a lot of taking influence from other artists—not to imitate, but kind of chasing a certain sound that people have explored already. I think the key point in the mmph project was when I finally let go of that. When I started the project, I put myself in the room and never left it. When I got rid of what other people were sounding like and what other people were doing, just focused on me, I think that's when I really started developing the sound.

I was reading a New York Times interview with David Byrne discussing his record, and he described his collaborators as having “these electronic DJ names." How did you decide on mmph as the name for your project?

I actually can't remember. I just wanted it to be hard to pronounce. It's interesting that Byrne thinks mmph is a DJ name. My intentions were the complete opposite of that, I wanted to have a name that was kind of indefinable, you know? Like, how do you even pronounce that name? Like, M-M-P-H? I thought it was interesting.

You initially put out the EP with [vaporwave netlabel] Beer on the Rug before getting picked up by Tri Angle. How did that come about?

When I first made Dear God, I sent the demo to Tri Angle, it was actually one of the first labels that I sent to. I was a huge fan of it, and one of the reasons I really got into production was some of the stuff that was on there, like Holy Other, Lotic, and The Haxan Cloak. I sent the demos in the hopes that I could, one day, maybe contribute to the label, but never heard back. When I released the Dear God album with Beer on the Rug, Fact Mag wrote a little piece of it, and my managers Dean and John—they run the label True Panther—sent it over to Robin [Carolan], who runs Tri Angle, and we kind of got connected like that.

Your name's also been cropping up on the credits for some major indie releases this year. Did you record those pre-Tri Angle?

When I was in conversation with Robin about joining Tri Angle, at the same time I was doing stuff with serpentwithfeet and I was doing stuff with David Byrne and Lauren Auder. When I made Dear God, I thought in my head, this was going to be my last mmph album, and I was really just going to focus on my studies, which is electronic production and design. I was just going to heavily focus on software knowledge so I could get a job in the sound design world or the programming world. But, yeah, I somehow got picked up, and it all came at once.

From the video for "Sun God" through to the other track titles, like "Wilting" and "Blossom," and to the cover of itself, it seems like floral imagery is really infused into the EP. What role does the natural world play in your music?

My influences are a lot of what's going on in the physical world, pressure levels and things like that. When I was making Dear God, I was basically a hermit. If you listen to the album, there's a lot of ambient sounds, such as the wind chimes, which are pretty much the glue of the EP, and I actually transcribed the wind chimes from my neighbor's backyard. Influences like that, things that are very immediate to me at the time. And as far as the floral things, the EP artwork, my friend actually gave me that rose on my birthday, and I didn't really think much of it at all, kind of just, "Oh, he gave me a single rose, and I'm just gonna pin it to my bedroom wall." And during the time, a lot of personal things and a lot of things that were putting a lot of pressure in my life were happening, and I would wake up, and I would look at the rose, and I would see it start to wilt and kind of transform, and it became more dreadful, and it became more dead, yet it seemed more alive. It was almost like a northern star for Dear God.

It sounds like creating the EP was a really emotional experience. What was going on during that time?

My mom was suffering through a disease, and I'm sure this applies to everyone, but, as a Korean, you value your family a lot. All the purpose for your life is to do well for your family and be there for your family, but I was just thousands of miles away, you know? Although we lived in the States, my mom was getting treatment in Korea, and it felt like I couldn't really do anything, couldn't really be there for her. My wishes were to drop out school and go back and help her out, but, instead, all my family members kept telling me, "It's okay, just continue what you're doing in school and keep continuing doing your best, and pray to God." Although I'm not a religious person, that phrase really stuck with me. The only thing you could do is pray to God. It seemed silly, yet it was very impactful. And I guess what I did for her was make this album. I had so much negative energy, and I needed an outlet, and Dear God was just that—it was kind of my medicine. I hope that when people listen to the album, although it has a lot of dark undertones, [they hear] hope.

Your online presence is so minimal. Are you a fan of social media?

Social media's kind of been always a weird thing for me. I think part of it is because I moved around so much when I was little. When I'd moved to Canada, my parents had decided to give me an English name, Sam. And that never felt natural all the way 'till I moved to California and I told my parents, "I'm not gonna go by Sam anymore, that's crazy. I'm Korean. Why do I need an American, Christian name?" Things never felt permanent for me and developing an identity was never my priority or something that felt desirable to me, you know? I understand that it's kind of essential nowadays, everyone is connected through it. But, even the way that I met a lot of the artists online, it wasn't through social media. And I think there's something still beautiful about meeting new people in person and talking to them. If you just want followers, you need to have like an aesthetic or whatever. And I don't think I've ever had that in my life.

After the EP comes out, what's next for you?

I have another EP lined up, and it's gonna be on Tri Angle hopefully sometime this year.