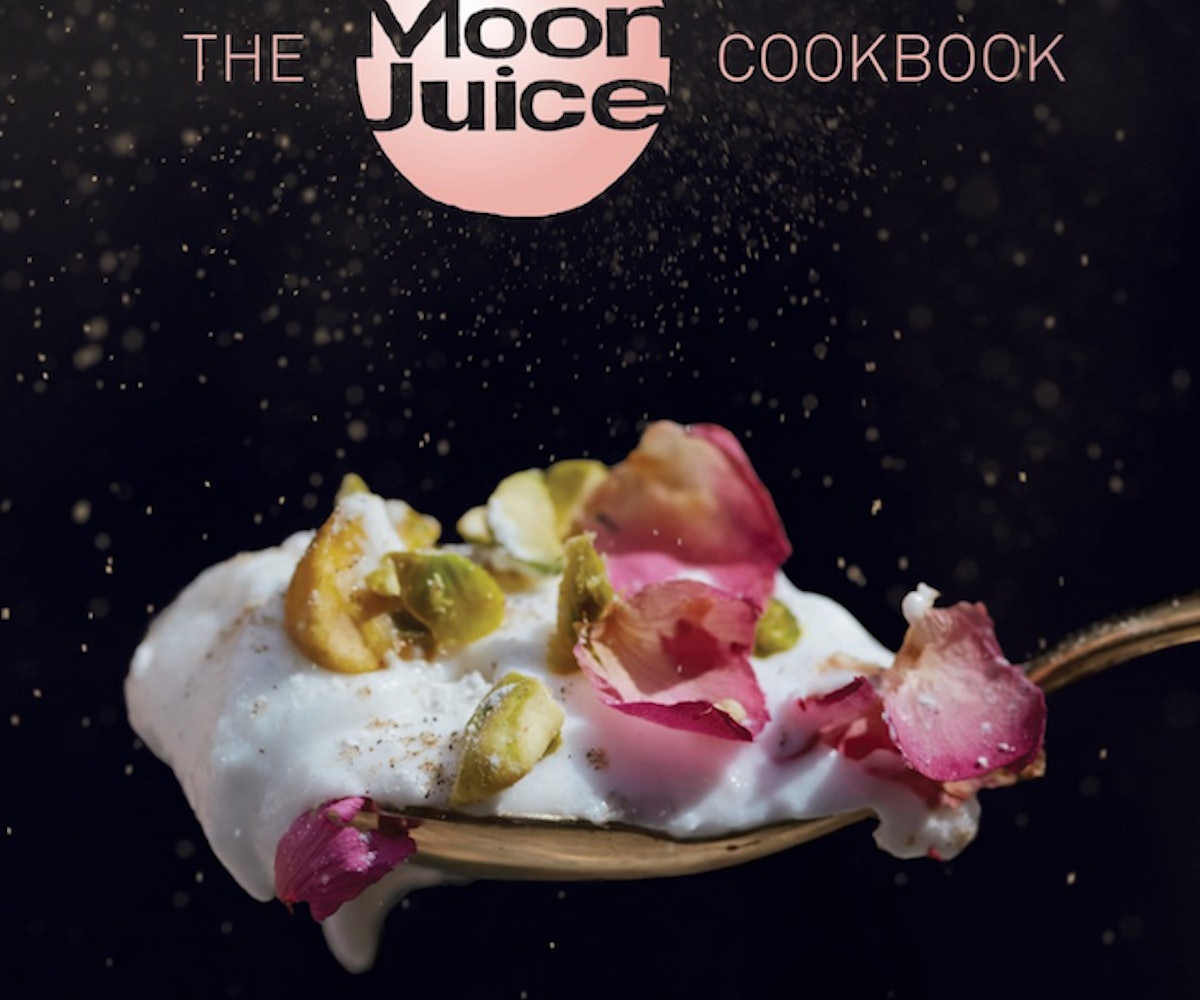 It all started with Sex Dust. There I was, doing what I often do in the mornings (namely, do what I do best aka procrastinating aka lazily checking email aka reading old editions of the GOOP newsletter that I never got around to reading when they were first sent) when I happened upon a group of recipes from Amanda Chantal Bacon, the founder of Los Angeles juice and wellness shops Moon Juice. The names of the recipes read a little bit like a Reductress send-up of the kind of recipes that would be featured on GOOP (think: Beauty Milk and Spirit Truffles), but because I am a sucker for exactly that kind of thing (why, yes, I do have a jar of bee pollen in my refrigerator, and, yes, I do sprinkle it liberally in my smoothies despite the fact that bee pollen's smell, texture, appearance, and taste are virtually identical to cat litter), I clicked on the article.

The recipes provided on GOOP were prefaced with a brief introduction of their creator by GP herself. Paltrow wrote that Bacon is "a bad-a$* [sic] entrepreneur and single mom who built her business from the ground up," "other-worldly," and that "she literally glows from within." Being that these are all ways in which I aspire to be described, I read on. And then the recipes themselves only furthered my interest, because they included ingredients like Brain Dust (in GP's Brain Activating Adaptogenic Drink) and Pearl (in Beauty Milk) and the aforementioned Sex Dust (in Sex Bark). I was intrigued. I wanted to know more. I wanted to make the Beauty Milk. I wanted to eat the Sex Bark. So it was with no small amount of excitement that I learned about the release of The Moon Juice Cookbook, and eagerly awaited its arrival.

But while my enthusiasm for this kind of thing (by which I mean participating in vaguely cultish behavior, all in an attempt to be "well") is possibly boundless, I should say that I do understand why other people might instantly be put off by recipes involving esoteric ingredients like maca or ho shou wu, particularly when those recipes are being peddled on a site like GOOP, which has also extolled the virtues of a $15,000 24k gold dildo. (Which, ha, I'd probably buy if I had enough disposable income??) Bacon herself has caused minor internet drama after doing things like having an Instagram feud with Father John Misty over a stolen crystal (no, really) and recording a food diary for Ellewhich included lines like, "at 9:30am, I drink 16 ounces of unsweetened, strong green juice, which is my alkalizer, hydrator, energizer, source of protein and calcium, and overall mood balancer. It's also my easy, 'lazy,' and delicious skin regime," leading many to mock her and feel that she is thus worthy of ridicule, in part because her lifestyle is wildly unfamiliar to so many people, her interests and knowledge base so far distant from their own, and in part because this kind of hippie-ish language is inherently amusing. Why is it so funny? Well, because the current concept of wellness carries with it connotations of immortality; as if the wellness practitioner believes that by alkalizing and hydrating and energizing their bodies, they will stave off death, perhaps indefinitely. And this is funny. Because we're all going to die—there's no avoiding that.

But, there's another bothersome aspect of the success that Bacon and people like her have found in today's wellness boom, one which isn't just based in snark. What upsets many people about the kind of diet and lifestyle that Bacon espouses is that, frankly, they take time and money to achieve. The thing about Bacon citing her green juice regimen as being a "lazy" fix for any skin problems is that it's fundamentally ironic: There's nothing lazy about sourcing the ingredients to make an effective green juice (to say nothing of a juicer, plus those things are a bitch to clean) or even buying a premade juice. And there's also nothing cheap about it. A constant supply of only the freshest produce and the Moon Juice-approved supplements is expensive. (Again, I keep myself well-stocked in bee pollen and spirulina, so I know.) There's plenty of people who rightly recoil at the current wellness industry because its underlying message is that wellness—health, really—can only be attained via capital. Health is wealth, in other words. This is fucked up! Genuinely. Healthy living should not be the sole provenance of the elite. It's awful that people are told that the secret to longevity is prohibitively expensive. It's also not exactly true.

The reality is, while it isn't inexpensive to buy a jar of Bacon's Brain Dust, it's also expensive to go out drinking a few times a week. And Brain Dust—whatever its actual benefits (read more about that here)—is at least not going to kill any of your little gray cells. Plus, while many women are encouraged—and do—drop small fortunes on beauty and skin-care products, also part of the wellness industry, Bacon's beauty diet is remarkably spare. It's not that she's cavalier about money in general, she just, literally, wants to put her money where her mouth is. The disturbing truth is that while there are plenty of ways to spend a small fortune in the pursuit of "wellness," there's also plenty of ways to spend a small fortune while pursuing things that are nowhere near as good for you. But, you know, that's capitalism for you. It's disturbing. The idea that someone like Bacon would be raked over the coals for celebrating the simple delights of a nori taco, while other people in the public eye, many of them men, are practically deified for flying all over the world and gorging themselves on all manners of things is disturbing too. (And, hey, that's sexism for you. Which is also disturbing.) But this is the reality we live in, where someone like Anthony Bourdain (who, admittedly, I also love) is adored for his unapologetic attitude about his way of life, but Bacon gets called out as smug or affected for hers.

Here's the thing, though: Read anything that Bacon writes about her own journey to wellness, and you'll quickly realize that she's the furthest thing from smug or affected. Earnest? Absolutely. In possession of a cohesive plan for how she feeds herself and treats her body? Yup! These traits, though, are not affects, they are hard-won realities. In the introduction to The Moon Juice Cookbook, Bacon details her chronic health problems, and her journey to discover a diet which would help her achieve balance. She's a trained chef with years of experience who has also consulted with "doctors, acupuncturists, and naturopaths," and has utilized all this information to develop recipes which fit into her wellness needs. Bacon explains how finding balance in her diet allowed her to have "a general expansion in all aspects of [her] life, inwardly and outwardly." This statement is the kind of thing which tends to inspire a raised eyebrow (at least) in the more cynical among us, but that's too bad. In my mind, any chance a person has to be centered and find some sense of peace in the world should not be seen as a bad thing.

But so, about the cookbook. In some ways, by the time I actually got to reading the recipes, I had already come to terms with how much and why I liked Bacon's nutritional ethos. I was pretty sure I understood what everything was all about and wholeheartedly believed in the idea of using food to feed myself in more ways that just one. Who needed the recipes? Besides, wouldn't they probably be incredibly complicated with lots of hard-to-source ingredients? Turns out, no.

In fact, the cookbook, beyond being filled with gorgeous, color-saturated photographs (several have a sly humor to them, which I really liked), has many recipes that are actually quite easy to make. Sure, a lot of them call for the use of a dehydrator, which isn't a kitchen tool that I (or anyone I know) have, but you can use your oven instead. And then there's the cost of a juicer, which there isn't really any substitute for, so, I don't know, that's definitely a thing. Beyond that, though, all you really need is a powerful blender, and you're set to make all sorts of absurdly delicious and absurdly healthy and absurdly named Moon Juice treats, like Hot Sex Milk or Bliss Brain. On a practical level, Bacon's recipes for everything from muesli to vanilla pastry dough are simple enough to make and are the kind of things I can easily imagine making again and again, and feeling all the better for it. And if other people want to laugh at the inclusion of Sex Dust in a recipe for chocolate bark? Let them. That just means there's more for me.

For two recipes from The Moon Juice Cookbook click through below. And you can buy the book yourself here.

Years ago, unaware of its Ayurvedic roots, I naively conjured the idea of an ancient yogic recipe that added turmeric juice and spice into milk. This is a blend that really wants to be on the planet: From its resurrection in the Moon Juice kitchen to now being widely enjoyed by the masses, it is a luminous recipe that is equally healing and pleasurable.

Turmeric root has a thousand and one virtues, including inflammation-soothing properties that are as effective as a painkiller for me. I find it works within about twenty minutes to address joint pain.

This nourishing Moon Milk delivers lifetimes of pleasure and a multidimensional taste experience. It speaks to the magic of medicinal traditions that expand beyond time and space, recalling the ancient phenomena of Ayurveda. If you can’t get fresh turmeric, you can substitute ½ teaspoon of ground turmeric but it will have a distinctly different flavor.

Combine all the ingredients in a blender and blend on high until the peppercorns have fully broken down.

Enriching this golden potion with 1 teaspoon lucuma powder adds to the inflammation-taming benefits of the turmeric, and will help you cut down on the honey content, enhancing the inherent sweetness of the fresh turmeric root juice. Try halving your honey, or use none at all!

For years, I ate oatmeal every morning to fuel my day. Oats are an incredible example of plant

fuel, yet they always seemed to

have the opposite effect on me. I’ve since learned that when you

cook oats, they become acidic, while raw oats are very gentle and alkalizing on the system.

To serve this muesli, I soak the oat mixture in pumpkin seed milk overnight, an effortless way to

recipe is done while you sleep. You can easily scale this up or down to serve one or ten.

White mulberries and maple syrup are mineral dense, while the pumpkin seeds and pumpkin

In a large bowl, whisk together all the ingredients except the maple syrup to blend thoroughly.

Drizzle with the maple syrup and toss with a rubber spatula to coat evenly.

on your dehydrator for 24 hours. Transfer to an airtight container and store at room temperature

To serve, stir 1 cup of the muesli with 2 cups Pumpkin Seed Milk. Refrigerate

overnight; in the morning your overnight oats will be ready to go! Garnish with sprouted