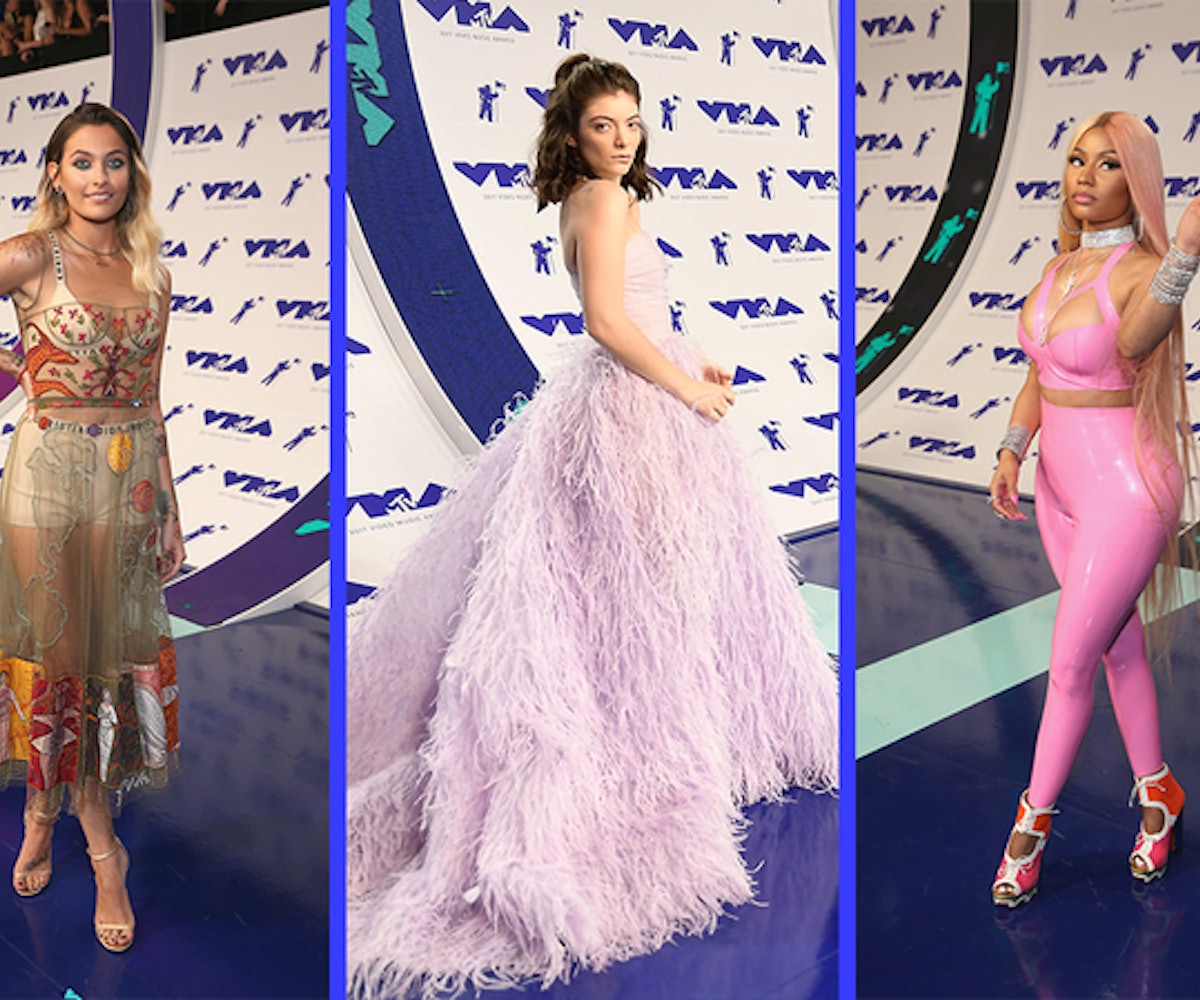 Unlike the Grammys, Emmys, Golden Globes, or any other fancy awards show where high-fashion looks are rampant, the MTV Video Music Awards are a time for the stars to let loose. You can wear a ball gown, as Lorde displays, but you can also get away with sequined harem pants, as Demi proves. It’s still glam, but more exciting.

And while we didn’t get a Gaga meat dress this year, there were some moments that kept us on our toes. Like, Lizzo’s “wedding” dress, Nicki Minaj’s pink latex one-piece, and Lil Mama’s birdcage bag. It was an eclectic night for fashion, for one of the more eclectic awards shows out there.

Ahead, we round up the 16 most standout looks from the night. Click through to check out our favorites.

Cardi B’s Christian Siriano number could be mistaken for a dress from the back, but it’s actually a pair of pants with a cape. Perhaps we’re even getting hints of Madonna with her pointed bustier?

A navy silk pantsuit looks right at home on Sydney Sierota of Echosmith.

Paris Jackson brought a hint of boho to the VMAs, courtesy of Dior.

It’s before Labor Day, so Katy Perry can get away with wearing this stunning, structural white Stephane Rolland dress.

Is it too early to tell Millie Bobby Brown to stop getting older? Well, nothing says all grown-up like an elegant tiered Rodarte dress and patent black boots.

We appreciate fashion with a message, and Mel B’s Discount Universe dress, which reads “You Will Never Own Me,” definitely comes with a powerful one.

Vanessa Hudgens brought some heat to the red carpet in a fiery Yanina Couture dress paired with matching red eyeliner.

It was a family fashion affair tonight for Michael Jackson Video Vanguard Award recipient P!nk, who coordinated her outfit with her husband and daughter.

The accessory of the night goes to Lil Mama’s birdcage bag (complete with an actual real-life bird) that matched her custom Michael Costello dress.

Only Nicki Minaj would wear a bubblegum pink latex bodysuit by Atsuko Kudo.

Teyana Taylor channeling Janet Jackson's 1995 VMA outfit is our favorite homage yet. Her insane abs are a mere bonus.

Hailey Baldwin is a glistening delight in this silver Zuhair Murad jumpsuit.

All Balmain everything was the name of Alessandra Ambrosio’s game this year.

The truth hurts, as Lizzo’s custom Christian Siriano dress reminds us, and the tea, in this case, is that she had one of the best looks of the night.