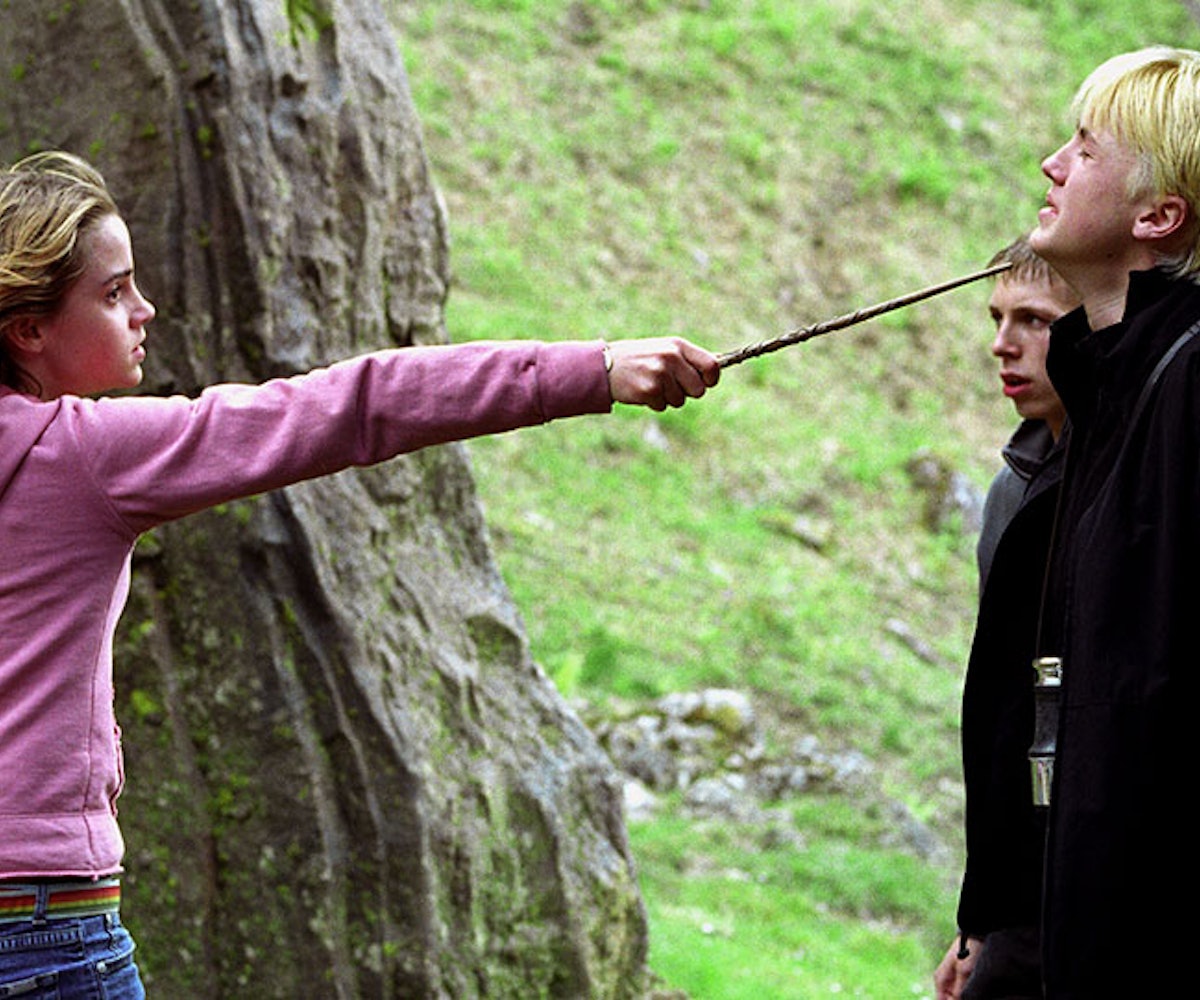 Part of the whole idea of geeking out online with other people—whether it be over Hunger Games fan fic, LGBGT superhero cosplay, or just plain, old Harry Potter—is that you’re joining a community of likeminded fans who connect with you through a shared love without judging you or importing their own agendas. You’re in a safe space. Well, at least, that’s how it's supposed to be.

Ben Schoen, once contributor to the popular Harry Potter fansite Mugglenet seems to have broken the informal social contract that makes online geekdom so special and precious when he reached out to a former forum member of one of his older sites and not only used the connection to ask her out, but harassed her online when she ultimately rejected him. What makes it worse is that Schoen also owns Feminspire—a women’s issues website.

Schoen approached the young woman—BuzzFeed’s Grace Spelman—via Facebook, which is weird and awkward in and of itself, but not quite creepy.

What is creepy is that Spelman and Schoen had never actually met in person, and that she had friended him when she was but a 14-year-old Potter fan. Moreover, he had only reached out to her because her name had appeared on a Daily Dot article about funny online writers.

Quite rightly, the now-adult Spelman first ignored, then rejected him. Alas, Schoen didn’t take no for an answer and moved the conversation into the public sphere through a series of angry, bragging tweets which you can read below.

He followed that up, because guys like him always do, followed up with a long and only apparently nice email explaining how Spelman—who let’s remember was just sitting at her computer minding her own damn business—was in the wrong and that the owner of the popular fan site and other online properties could be an “asset” to her. As you can imagine, Spelman remained nonplussed and, in a nice bit of turnaround, published the letter via Twitter.

As Jezebel reports, while things continued to spiral out of control for Spelman, Schoen turned to both the Daily Dot to defend himself and savage his former fan while invoking the language of the Men's Rights movement.

“I have done more for the cause of advancing women’s rights than any of the people who are criticizing me. This so-called crisis is manufactured by Ms. Spelman as a way to increase her profile as a social justice warrior. I grew up without a father and I spent years protecting my mother from scummy men and dealing with all of the difficulties that come with not having a male role model. Am I rough around the edges? Sure. Am I a predator? Absolutely not. If you read the email I sent Ms. Spelman it was not threatening and was filled with apologies. I even offered to connect her with people who could help her career. I had no interest in continuing contact with her afterwards since I was offended by the manner in which she ended our interaction. I represent no threat to her and her painting me into a villain and sending all of her sycophants after me is incredibly disappointing and immature. My attorney tells me I have a case already but I’m not going to go that route unless Ms. Spelman continues to attempt to unjustly tarnish my image.”

Over on Twitter, Schoen seems to be attempting to enlist the support of the online MRA community, the web’s least-likable hatebros.

Spelman, for her part, has been getting phone calls from unlisted numbers and enlisted the help of a lawyer.

At least one other person has stepped forward, offering a story of a similar encounter with Schoen.

"Hi Grace, I just wanted to add to the numbers who've told you about Ben. I had a similar experience ~8 years ago after meeting him on a book tour he was on w/ the other Mugglenet guys. My friends & I hung out w/ them that night & he hit on me pretty aggressively the whole time. (He was still in high school then.) In the weeks after, he sent me similar Facebook messages to what you received, even after I started ignoring him as they became creepy. I chalked it up to youthful exuberance at the time - I mean, he was a kid from Kansas who likely was away from home for the first time & talking to girls who didn't know him as the chubby kid, but as someone in the Harry Potter "in crowd." (I mean, he had met JK Rowling!) Unfortunately, it didn't seem to be an age/maturity issue. He's just an asshole."

As well, Feminsphere seems to have totally collapsed last month.

Currently, Spelman continues to do her job at Buzzfeed and has put on a brave face via social media under circumstances that would make most of us curl into a very small ball and die.

Grace, this is NYLON, and we’re sending a huge wave of love your way.

So, is there even a takeaway to this tale?

Well, while Schoen continues to rail against just about anything with a double-X chromosome on Twitter, each tweet makes him more and more a professional and social piriah. Dude, the only cheese down that hole is a bunch of deadend MRA bros, a very narrow career catering to them, and an unending series of lonely nights on 4chan.

Perhaps the only thing to consider here is that without her prominence as a writer for one of the web's most-read sites, it's doubtful you'd even be hearing about what Spelman's going through. The harassment and public attacks would only appear in the smaller circle of Schoen and Spelman's shared contacts. Like what happens to many women in many ways, it would go unnoticed and unanswered. Spelman's situation is that of many, many thousands of young women just like her, just with many more followers watching.

(Via The Daily Dot)