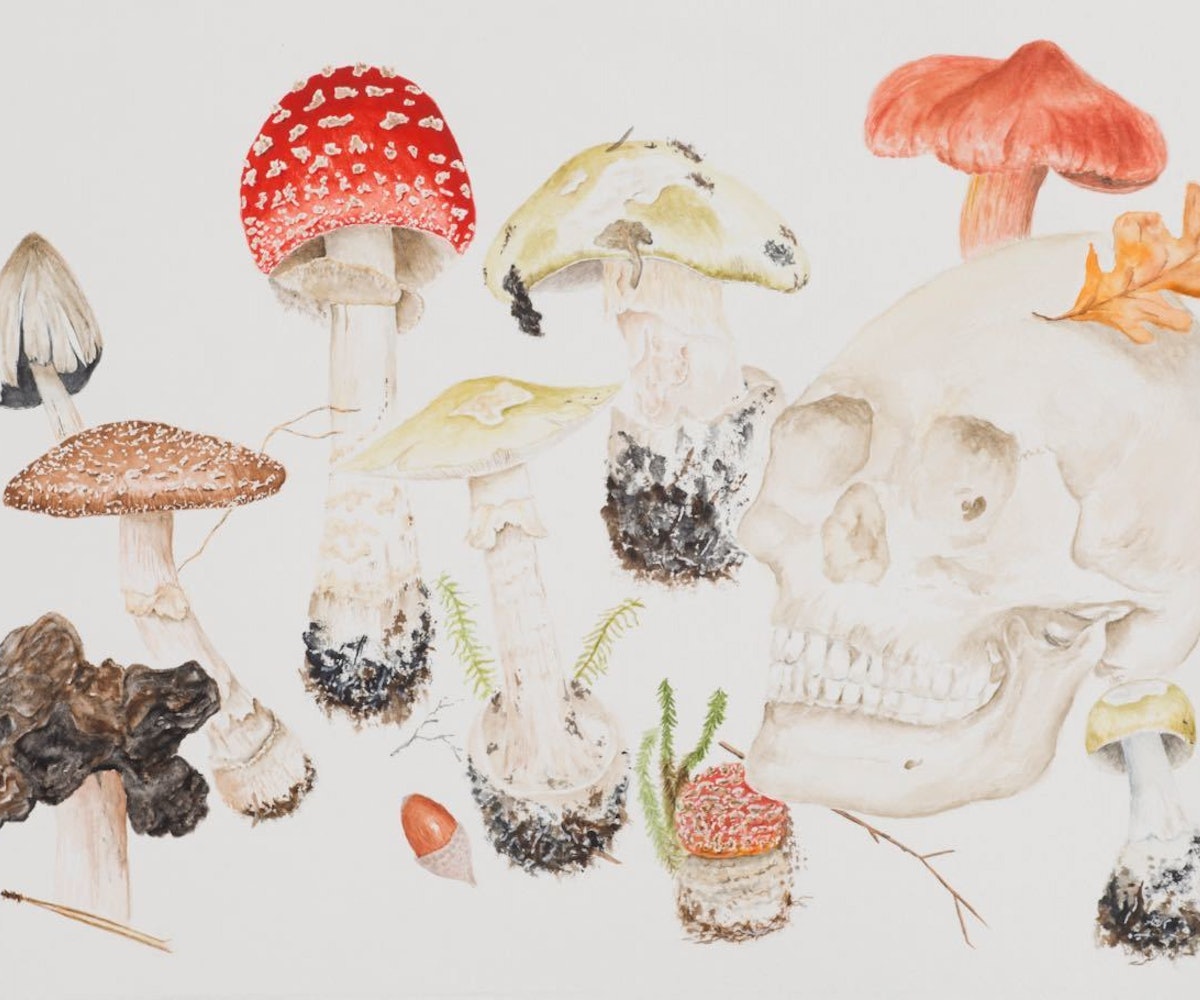 "If you wanted to get away with murder, it's actually not a bad weapon, because the chances of being detected are so small," Dr. Denis Benjamin, a doctor, pathologist, and author of the book Mushrooms Poisons and Panaceas, said to me on a recent phone call. I had wanted to talk with him following my third viewing of Paul Thomas Anderson's film Phantom Thread, in which poisonous mushrooms are used as a means of communicating... love, yes, but also, dominance and care and frustration and support. It seemed to me an unorthodox method of getting a message across, but not an uncompelling one. Mushrooms, after all, are a relatively humble organism; they grow underfoot; they are ubiquitous (fungi can be found in abundance on every continent, including the otherwise flora-inhospitable Antarctica). They are a surprisingly subtle weapon; sickness follows a soothing cup of tea or a satisfyingly buttery omelet. But are they an effective one? I wanted to find out.

It would not be quite accurate to call poisonous mushrooms a trend in 2017 films, but it would also be smart to plan a double feature for yourself at home one night, during which you watch The Beguiled and Phantom Thread. (You could also throw on 2016's Lady Macbeth if you want to go really deep into the mushrooms-as-weapons genre.) But while poisonous mushrooms might not be a trend, their mere inclusion as a weapon used by women, to combat a specifically masculine toxicity, is a fascinating one, because of how much more rooted in symbolism the choice of the mushrooms is than it is in practicality. Because, while Dr. Benjamin did concede to me that a mushroom wouldn't be a bad weapon, it would also be an unreliable one, due to the user's dependency on a poisonous mushroom being available for foraging. And besides being unreliable, it would be uncommon: "You have to be a pretty sophisticated mushroom forager to know which to select... as far as using mushrooms to kill people, there are really very few stories of that. Probably I've collected half a dozen," Dr. Benjamin said.

Why then, is the poisonous mushroom so romanticized? Historically, mushrooms have inspired either reverence or revulsion, and Dr. Benjamin told me that whether or not you loved or hated mushrooms had much to do with geography. "There are huge cultural differences in how people view fungi," he said, explaining that Western European society thought of mushrooms as harbingers of death, whereas Asian cultures thought of mushrooms as being akin to signs of divinity. And while those extremes are fascinating to think about, the reality is that one needn't romanticize mushrooms to actually be in awe of the properties they possess.

Dr. Benjamin explained to me that there are "three different lifestyles of fungi which we rely upon." The first is fungi as a global recycling system. "They break down all organic matter and recycle everything on earth. Without that, we'd be in big trouble," he explains.

Second, fungi "have developed a relationship with 95 percent of plants on earth, all of which have fungi around their roots and exchange of nutrients. It's sort of like they're all connected by fungi. They give trees water and minerals, and, in return, the trees give them sugar. They act as sort an underground internet system. To me, that's the most interesting part of fungi, understanding their relationship with trees, grass, everything."

And, finally, "the third lifestyle is one that we don't particularly like because that's where they act as parasites and damage and destroy and kill living tissues. There's a fungus that wants to get rid of you. And these can do a lot of damage. The potato blight in Ireland, that's one example that really changed the history of the country."

Thinking about fungi in such a comprehensive way, then, almost makes it seem like too powerful a tool to be used as a mere cinematic device. But, of course, that's exactly what makes it such a potent symbol—particularly when used as a means to get rid of toxic male culture. Because while some mushrooms themselves are toxic, one function of fungi is actually to leach toxins from the soil around them, and serve as a cleansing agent. So whether as used in The Beguiled by a group of women seeking to rid themselves of a dangerous and alien male presence, or in Phantom Thread to temper the heightened ego of a narcissistic male artist, mushrooms do make a very real amount of sense as a method to leach metaphorical poison from our habitats.

Beyond that, mushrooms also—as anyone who has ever eaten them... recreationally, knows—potentially have other transformative powers. I spoke with Tom Bigelow, president of the New York Mycological Society, about the allure of mushrooms, and he cited psychedelic mushrooms when we talked about the possibility of using toxic mushrooms as something "transformative, for those who want a new character." Or, as in Phantom Thread, for those who want to give another a new character. Like Dr. Benjamin, Bigelow said that making "mushroom mistakes are rare," which is why it's highly uncommon to hear of accidental—or intentional—serious mushroom poisoning. (Although, these cases do exist, as with the recent tragic story of Nicholas Evans, author of The Horse Whisperer, who unwittingly seriously, though not fatally, poisoned his family and himself with foraged mushrooms.)

Perhaps, though, the lesson of the mushroom, nature's great communicator, is not that its power needs to be analyzed too deeply. It is capable of offering humans experiences ranging from transcendence to trauma—including death. Still, though, it is but a means to an end, fungi were here on earth long before we were, and will undoubtedly be here long after we leave. We could do well to look at mushrooms more carefully and absorb some lessons from them, think of ways in which we can connect better to one another and to the earth we all share. That might be the ultimate takeaway from Phantom Thread and The Beguiled, that we must balance our extreme polarities and work toward moving to a type of equilibrium; the mushrooms were used as destabilizing agents in order to bring about a new type of harmony. There is something beautiful about that, even if that harmony left, in the case of The Beguiled, a body count in its wake.

But that wasn't the fault of the mushrooms. That was the fault of overzealous behavior on the part of women who had just had enough. And, those actions were both totally understandable as well as perhaps unnecessarily extreme. But, as Dr. Benjamin said to me, "Humans, there's just no accounting for our behavior."