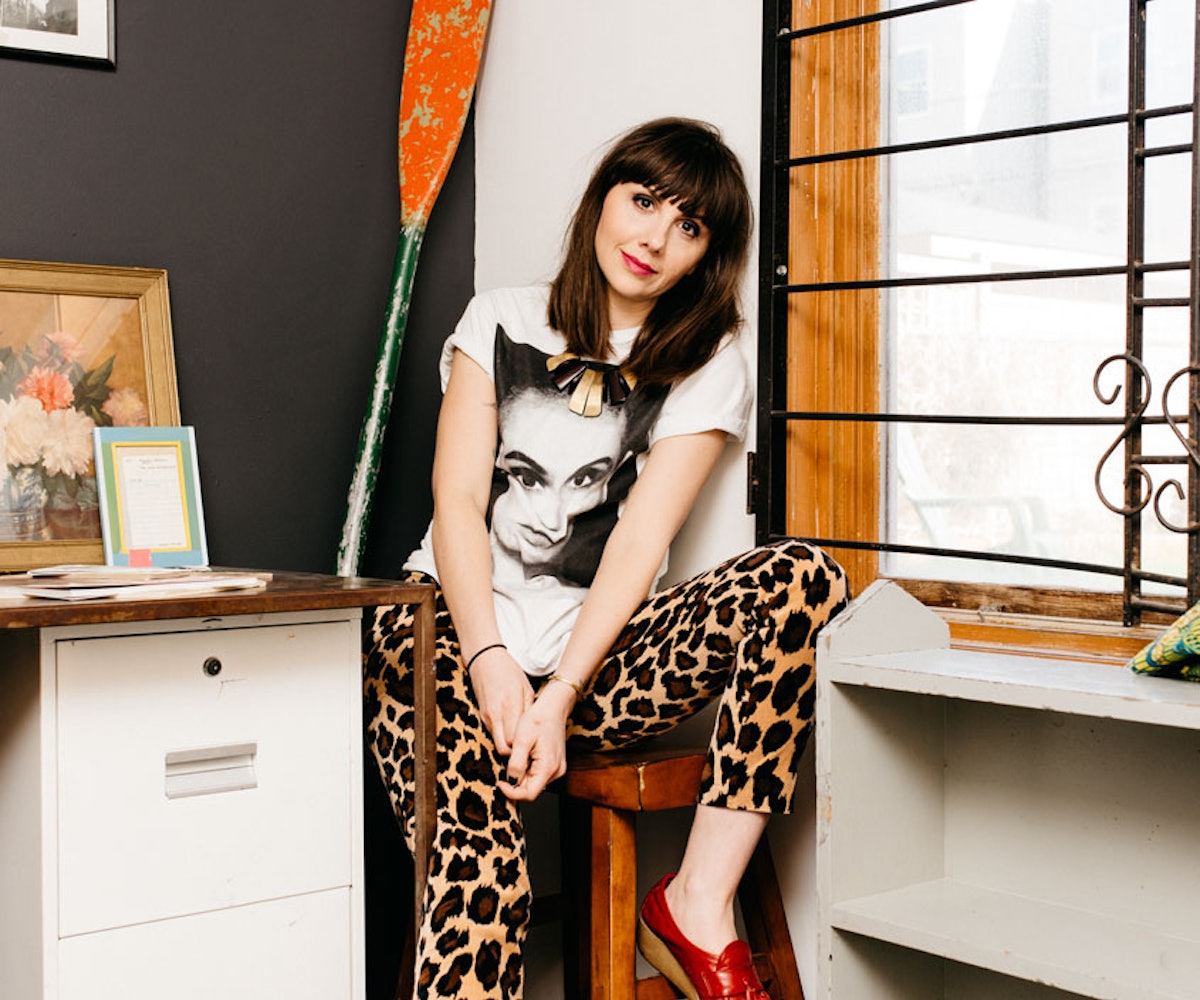 “The title is not entirely accurate,” writes Jessica Hopper, at the start of her new book, The First Collection of Criticism by a Living Female Rock Critic. She cites near-examples, like Lillian Roxon’s Rock Encyclopedia, the “life-changing” Rock She Wrote anthology, and Ellen Willis’s posthumous collection. “We should be able to list a few dozen more, but those books don’t exist—yet,” she continues, dedicating her book to “those that came before, those that should have been first, and all the ones that will come after.” Here, the frequent NYLON contributor shares an exclusive excerpt from the book, an essay titled “I Have a Strange Relationship With Music,” which first appeared in issue 17 of her zine Hit It or Quit It (Spring 2002).

I have a strange relationship with music. It is strange by virtue of what I need from it. Some days, it’s the simple things: distraction, entertainment, the sticky joy garnered only from Timbaland beats. Then, sometimes, usually early in the part of the morning that is still night time, most especially lately, I am painfully aware of every single thing that I need from music, embarrassed by what I ask of it. Having developed such a desperate belief in the power of music to salve and heal me, I ask big, over and over again. I have an appetite for deliverance, and am not really interested in trying to figure out whether it qualifies me as lucky or pathetic.

The stereo is just past halfway to as-loud-as-it-will-go, the rolling bass of Van Morrison’s “T.B. Sheets” (the first song on side two of the album of the same name) is moving throughout the house, its punctuating bump’n’grind ricocheting off the parquet floor, sound filling every room. This makes the fourth night in the last five that I’m doing this same routine—lights out, alone, in a precarious emotional state not worth explaining, dancing, though in a way that is barely dancing, because lying down is out

of the question on a night as hot as this, and lying down means motionless, and there’s really no being still right now.

T.B. Sheets is a great album on which seven of the eight songs are about Van Morrison and a girl he loves, who is dying of tuberculosis. I can count on one hand the times that I have made it through the entire album without crying. It’s brutal and never fails to deliver in its relentless humanity. Some songs detail the recent past, a golden reminiscence of some then-average day (“Who Drove the Red Sports Car”) that now will have to be enough for a lifetime; he’s asking her, “Do you remember?” insinuating some intimate exchange, some forgotten little secret. He needs her to remember. “Beside You” is a fierce, rambling pledge—he’s pleading for her confidence, in a torrential cadence of nearly unintelligible half-sentences that sound like they could be directions someplace, before the decimating crescendo. He sounds drunk, a little off-key, hysterical, now saying everything he ever meant to say to her and didn’t, confessing himself, as if this act of deathbed desperation, this unbearable love, this compassion to the point of oneness with her, if she knew it, if she could really understand it, and take it in—it might just save her. All of this is cast out amongst ominous, trilling B3 sustain and repetitive guitar, droning off into bottomless tension. (A version of this song appears later on, a version which is totally chardonnay and mystic gamelan flutes and angelic production, in comparison to the decidedly drinkin’-straight-from-the-bottle, succulent, lo-fi, four-bar, party-blues hip sway of the original.)

The title track, “T.B. Sheets,” is nine minutes and 44 seconds of Van rending an exquisite topography of bleak human expanse, an outline of him collapsing under the weight of incontrovertible mortal pall, in a dialect too casual and acrimonious for how well he knows her. He’s unable to be of any use—unable to get far away fast enough from his fear, evading the knowledge of exactly what all this means, the finality of it. Details give way to a much deeper reckoning: “I can almost smell/ The T.B. sheets.” Audibly choking for air, and again repeating, with frail cogency, “I gotta go” over and over, like a mantra of absolution, seeking another set of chances, burdened by survival.

It’s a song of failure. It’s realizing that sometimes the best you’ve got to give isn’t much of anything at all.

Dancing in pitch-dark rooms, rooms illuminated exclusively by the tiny light on the turntable, is an activity that fits very well with my ideas of “rock-critic behavior” (which is like normal music-fan behavior, but substantially more pitiful and indulgent). It’s behavior that comes from an inextricable soul-entanglement with music that is insular, boundless, devoted, celebratory, and willfully pathetic. It’s my fantasized notion of what a REAL rock-critic scenario is like: a “special” manual typewriter, ashtrays full of thin roaches, an extensive knowledge of Mott the Hoople lyrics, a ruthless seeking for the life of life in free jazz sides. May also include: a fetishizing of THE TRUTH (which always turns gory, no matter what records you listen to), detoured attempts to illuminate the exact heaven of Eric B. & Rakim or Rocket From the Tombs with the fluorescent lighting of yr 3 a.m. genius stroke prose; and, most of all, an insatiable appetite for rapture that cannot be coaxed by any other means. And oh what motherfucking deliverance when you find it! It’s exhaustively chronicling what it is that artists possess that we mere mortals do not; what it is that they offer up that we are unable or unwilling to say ourselves. They offer a connection to the disconnected, they make our secrets bearable in their verses and choruses: ornate in their undoing, gambling with their happiness, their personal irredemption, their humility, using failure to build a podium to reach god, their faked orgasms amid in-between-song skits, their solos, their clever rhymes, their crippled expectations, their spiritual drift, their still-unmet Oedipal needs, their fuckless nights, their not not-so-gradual disappearance from reality, their rodeo blues, their ghetto living/ghetto dying, their unflagging romantic beliefs, of being an outlaw for your love, Reaganomics, the summer they’ll never forget, the power of funk, hanging at the Nice Nice w/the eye patch guy, American apathy, taking hoes to the Cheesecake Factory, getting head in drop-top Benzes, isolation, the benefits of capitalism, screwing Stevie Nicks in the tall green grass, the swirling death dust, the underground, and none of the above.

I want it. I need it. Because all these records, they give me a language to decipher just how fucked I am. Because there is a void in my guts which can only be filled by songs.