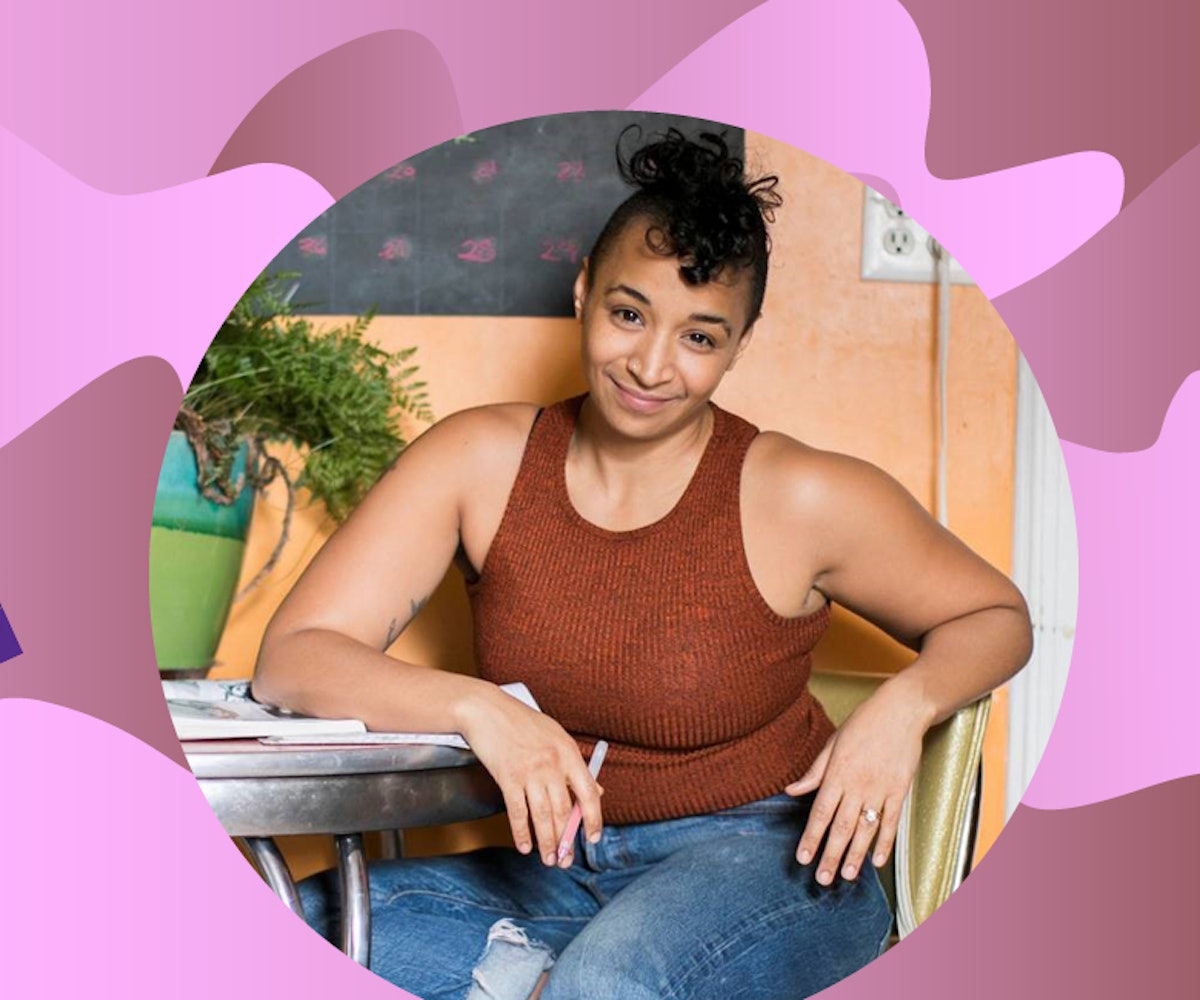 "At one point I saw that the book was to be shelved or categorized in Philosophy," Mya Spalter told me, talking about her new book, Enchantments: A Modern Witch's Guide to Self-Possession. "I was like, Am I a philosopher?"

"That's so fucking cool," Lena Dunham, who published this book through her Random House imprint, Lenny Books, said, "because I was scared it was going to be, like, Self-Help, and I was like, Not quite right."

And while it wouldn't be quite right to categorize Enchantments as Self-Help, it wouldn't be wrong exactly, since Spalter's book definitely helps people have a better understanding of their selves, and how those selves relate to the world—the universe, really—around them. Spalter does this by giving readers a crash course on all things witchcraft, a subject on which she's an expert, having worked for years at New York City's iconic (and oldest) occult store, Enchantments—a must-visit for anyone interested in anything witchy. But Philosophy also feels like an accurate placement, since this is the kind of book that makes you want to reference it anytime you come to a difficult part of your life and don't know where else to turn. Spalter's writing style is immediately compelling in its frank humor and conversational tone; reading her feels like having a late-night talk with one of your best friends.

Speaking of talking with friends… below, I speak with Spalter and Dunham about how this book came into being, why the practice of witchcraft resonates with so many women right now, and how, ultimately, "every woman is a witch."

How did Enchantments find its way to the Lenny imprint? What made this such an ideal pairing?

Mya Spalter: In my work life I haven't worked at all that many places, but two of them are Enchantments and Random House. This book is the way that I found to combine those two skill sets. So when I started working again in Enchantments a couple years ago, I figured it might be time to write a book about it. It was around the same time that the last season of Girls was coming out, and I heard that you [Lena] had filmed a scene in there.

Lena Dunham: We did we spent a whole day shooting at Enchantments.

MS: So I heard that had happened, and I knew that Lenny Books had started. So around that same time I was like, I think I'm going to do this. I'm going to write this book proposal. Which I was prepared to do because I've read a gazillion book proposals—I know what needs to go into them. And at the same time, every writer has to figure out who they're writing to. Or maybe not everybody does, but I think a lot of folks find it really helpful, to sort of have someone in mind. So, Lena, I had you in mind!

MS: Yeah, so I was like, I'm just going to write this to Lena Dunham and if I do that I'll see who else hears it when I write it that way. It worked out… pretty well.

LD: Well, I didn't know you were writing to me, but I felt like you were writing to me. You know, Lenny is coming to a close, but not in a dramatic, you know, everything-must-go way, [but] in a calm, like, we've-truly-done-this way. And for us to have Mya's book to sort of be the way that we press on, and the way that we kind of move on, is the most beautiful thing because so much of Mya's book is about how to deal with change and transition by harnessing your own magic. Is that accurate to you, Mya?

MS: Yeah, I would love if people come away with that. Definitely.

LD: When I read [Enchantments], we were getting a lot of pitches just because people kind of think like, Okay, this is a book by a woman… so it must be right for Lenny! And so, a lot of my job was just to say a loving, "No, no, no." Because so many people thought the voice of Lenny was like, "Hey, we've got this funky book about sex!" And actually, that's not what we were doing.

When we saw Mya's proposal, it just felt like it combined everything that we were passionate about. And especially at this moment in history when, you know, issues of mental health, especially for women, and self-care, especially for women, it's critical—it's a pandemic. And for me, just personally as a woman who has dealt with a lot of… I've often felt like a witch, because I was getting burned alive. To read this, it was really healing for me, and I knew that the book would be healing for other people.

MS: I'm so glad to hear that. It brings to mind the fact that we talk about gas-lighting and how it happens on such a grand scale, but I think we do it to ourselves really subtly a lot. I think we get a strong feeling that comes from inside of ourselves, which comes from our intuitions and us knowing our best interests, and we mute that voice a lot. I feel like witchcraft practices, at a very basic level, makes space for that voice. And says like, "I'm going to listen to you, if it's for the task now or on the full moon or at any point during the day." But to make space to hear that is, like, that's it for me. Like, that's the line [between] what's witchcraft and what's not. So that's my goal: to get people to recognize that.

MS: We all have the power to change our own lives… [Some] things are transitory and not always within our control, but something that is always, always with you is that sensibility. And so cultivating that is [important, so] you can't forget it at home—it's always with you. If you can focus on that, then you can identify what power it is that you do have that's not conditional.

I feel like by treating these centuries-old traditions with the respect, you're giving space for women to feel validated about all the things that women have felt intuitively, but that kept getting dismissed out of hand by a culture that refused to listen to what it is that women are experiencing—particularly women who were marginalized for reasons beyond just gender. It feels like an amazing time to be offering women all this information about these rituals and beliefs.

MS: When people talk about spirituality, something that comes up a lot is that they want to feel connected to something larger than themselves. That's verbatim. People really put it that way a lot, and something that I've really been thinking about in that context is that, like, you are connected to something larger than yourself. It's not a metaphor. This planet and the living quality of the planet is a collective thing. It's one organism, and it's not just a kumbaya concept, it's straight science. It's just got one thing. And so I would love to move conversations about spirituality past that point, because people are like, "Yeah it would be nice to be connected to something larger than yourself." And it's just like okay, but you are. We are. So let's move on from there, let's just accept that and stop longing for it. It's here. We can experience it now.

Enchantments: A Modern Witch's Guide to Self-Possession is available for purchase here.