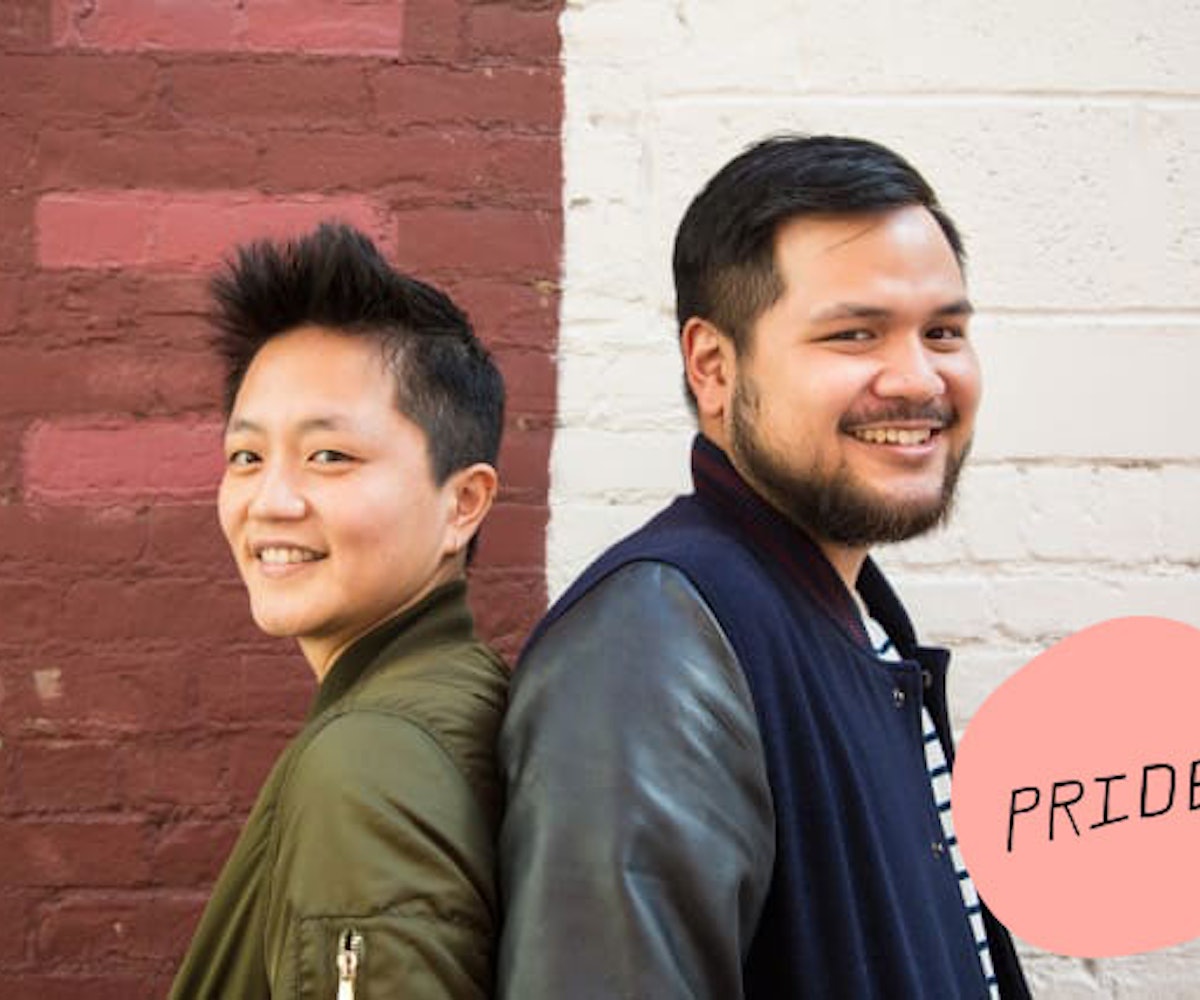 There are a handful of well-known podcasts with LGBTQIA hosts. RuPaul’s What’s The Tee comes to mind, The Read is another, along with TransWaves. But few get as personal as WNYC’s Nancy has in only its first season. And even fewer have a duo of Asian-American 20-somethings behind the mic.

The first episode starts with co-hosts Kathy Tu's and Tobin Low’s coming out stories. It’s emotional, at times humorous, but also occasionally quite distressing. There are episodes that focus on Tu and Low navigating their own queerness, but mostly the podcast serves as a platform for members of the LGBTQIA community to tell their stories.

Topics range from trivial, like figuring out whether or not Dumbledore is actually gay, to serious, like having two HIV-positive gay men of different ages, races, and backgrounds, discuss their experiences living with the disease and the stigma still surrounding it. Just yesterday, Tu and Low released perhaps their most intense episode yet; the co-hosts traveled to Orlando, Florida, to talk to people affected by the Pulse nightclub shooting for it.

With the first season wrapping up at the end of June, we chatted with Tu and Low about their favorite episodes, who their dream guest would be, and what they’re going to do before the next season premieres.

I've always been curious about how podcasts come up with their titles. What's that process like? How did you land on "Nancy"?

Tobin Low: So, originally the name of the show was Gaydio. There was an interesting moment where we were talking to somebody from the LGBT community, and they were like, well, if your intention is really to cover the whole community, using gay in the title actually excludes some folks who might otherwise be interested in your show. We thought that was a really interesting point so, for us, naming the show was always about finding something that felt very proudly queer, but also would maybe broaden [the base]; that it wouldn't feel like it was excluding anyone. "Nancy" gives a nod to the history because it is a term for a gay man. The reason we liked it for the podcast is, we had a moment where we were like, "Wouldn't it be silly to name a podcast after a person?" And then it was like, well, "Nancy' has that nod to history, but it also has the kind of irreverence that we want and the kind of silliness that we want, too. It felt like it hit a bunch of checklists of what we wanted the name of the show to be.

I think you both have been doing a really great job of making sure that many people's experiences are included in your narrative. Is there pressure on your end to make sure that you're including an intersectional viewpoint?

Kathy Tu: So much pressure. I mean, I think that we say we're going to try to cover everything, but knowing that, it's kind of impossible, we try to make it clear that every person, every voice we feature on the show, they're telling their own stories and not [those of] a representative whole. So, I feel like I am very anxious about making sure we get as many different voices from the community as possible on the show, also knowing that it's almost an impossible task.

TL: We try to think about it on the flip side, too. Any podcast that has a specific premise, the fear is always that you're going to run out of stories that fit that premise. We kind of have the opposite problem, which is that there are so many stories that people have written to us, that they're like, "We're hungry to hear from this perspective or that perspective." We have a lot of things we want to get to in future episodes… it feels like, yes, it's a lot of pressure because there's so much to cover but, looked at another way, it means that we have a lot of stories that we still have yet to get to.

Do you feel any extra weight given the political climate and the current administration's views on LGBTQ issues?

TL: We always knew that we wanted a big part of the show to be a celebration of the LGBTQ experience, and then the election happened, and there were a lot of queer people who felt afraid for their rights or questioned what was going to happen. We really revisited, like, can we make this same show we intended to? The answer was kind of both no and yes. No, in that we have to acknowledge what's happening right now. We did a story on gay Republicans to sort of look at that. But then there’s also this idea of having a show that celebrates and feels like a safe space, that we wanted to do before and after the election, and kind of feels more important than ever.

Tobin, I read that you are a trained cellist, and, Kathy, at one point, you wanted to become a lawyer. So, what drew you both to the radio broadcasting medium?

KT: I have so many things that I would be doing. I think I'd be a bag maker. That's my newest goal. Like, backpacks. I chose radio because I knew that I didn't want to practice law after doing a certain number of internships. I was listening to more podcasts than I was studying for any of my final exams. I had also been talking to my therapist about how "I'm pretty sure I'm going to make art one day," but I didn’t know what my medium was for years.

TL: For me, it was like, I had been a cellist for a while, and it was pretty clear that my career was heading toward being an orchestral musician or a chamber musician, which basically means a lot of gigs where you get to be creative and express yourself, but you're largely doing other people's creative vision. I had never really been somebody for whom being in control was a big deal, but suddenly I found myself wanting to be able to have some control of what I was putting out. Radio felt like I got to use a lot of the musical instincts that I had while also being very creatively in control of how a story came together. So it combined a lot of things that I like. And also, you don't make a lot of money in radio, so it has that in common with the music [laughs].

And are you both doing Nancy full-time, or do you have something on the side at all?

TL: We are full-time on the show. The most playing I do now is, occasionally, my friends realize they can ask me to play at their weddings for free. So, I have several weddings coming up.

KT: You should charge for that.

TL: No, but then you don't have to get them a gift. Playing is the gift.

You cover a lot of personal topics and explore your own experiences on the show. What's been the hardest part of this journey, and what's been the most rewarding?

KT: I'd say the feedback has been the most rewarding. The people who hear one of our personal stories and decide to share their own personal stories; it's been really kind of amazing to hear because, a lot of times, I feel like I get messages that say something along the lines of, "I can't tell other people this, but you know what I'm talking about, so I'm going to tell you." That's really nice.

TL: I think the hardest part has been that neither of us is quote, unquote a natural host, in that we're both more experienced either being on the production side or having worked behind the scenes in podcasting. Taking the leap of saying, not only are we going to be hosts, but that certain things about our personalities and who we are as people are going to come to the front—that's been an interesting thing to navigate.

You did an episode recently where you addressed the criticism that you received regarding certain stories. From the feedback that you've received, are there any general improvements that you hope to make in future episodes?

TL: It's interesting, I think that that episode was definitely about addressing criticism, but I think it was also largely about setting the tone that we know we're not experts, and we're going to try to tell a story the best we can, but we're open to people reaching out to us and calling us out in a constructive way and we're willing to have that conversation. I feel like incorporating the critique is a little bit of a moving forward thing, but it's also like, "We're gonna put stuff out, and if you feel a certain way about it, tell us and we'll have that conversation." We're very interested in is people who like the show and have reached out and said, "Love the show, can you please look into doing something about this?" Or, "Do a story about this." That's something we take very seriously when we're trying to find the stories.

Do you have an episode of Nancy that you're most proud of?

TL: I also love The Golden Girls episode. I think the HIV episode hit a lot of things that we always wanted for the show: It had an intergenerational aspect; it felt very honest and open and like a conversation. We were told by the Gay Men's Health Crisis person, who helped us set it up, "This kind of conversation doesn't happen that often, two HIV-positive men of different generations share their experience." So I felt like there were a lot of things in that episode that felt like what Nancy set out to do.

Do you guys have a favorite Golden Girls moment or episode on the series?

TL: When Blanche and Rose tap dance, it's a season one thing where they have to do a whole tap dance routine.

KT: I really like the scene when Dorothy and Sophia do a number together as Sonny and Cher. That was really funny.

Do either of you have a dream guest for the show?

TL: Somebody wrote in with a really thoughtful comment, where they were like, 'Have you ever thought about covering LGBTQ icons who are not entertainers?' Because so often our idols are entertainers, what about somebody in the STEM industry? I'm thinking about who we can find to talk to, who is not an entertainer and comes at it from an entertainer perspective.

Season one is coming to an end, what are you guys planning on doing in your downtime?

TL: We're gonna go to Disneyland. Sometimes people really judge us for that, but Kathy's going home to L.A., I'm going to visit my family in California, so it sort of made sense that we would do an L.A. thing together.

KT: And then right back into making season two.

And where do you hope to bring the podcast next?

TL: More conversations with folks outside of the entertainment world.

KT: Some often-requested topics in which we're going to try, but no guarantees: asexuality, religion, disability... there's a lot of stuff out there that we want to cover, and we'll see what happens.

TL: Yeah, a lot of it is just trying to find stories and seeing what sticks... and also knowing that whatever we want to cover, we have to find the right story. It has to be done in the right way, so that, a lot of times, dictates what makes it into the show, too.