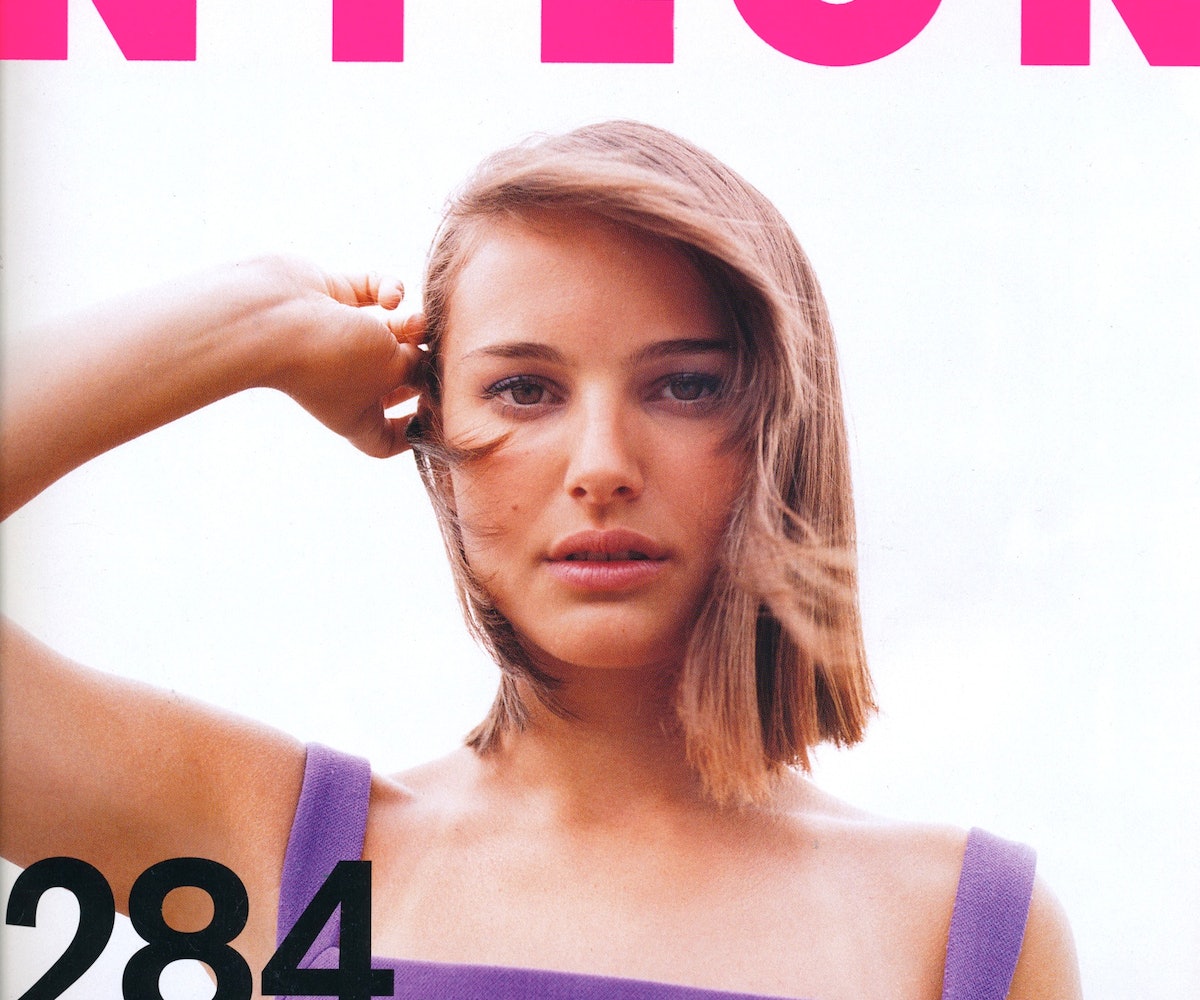 Our weekly Flashback Friday just got a whole lot cooler. We're still posting some of our favorite covers from past issues of NYLON, but now you can go even more in-depth with our faves by reading the cover stories in their entirety! Yep--consider this your really rad trip down memory lane. Today we're celebrating the release of Thor: The Dark World with our August '01 cover star Natalie Portman, who talked coming of age, college, and Star Wars with our writer Lauren Smith. Read on:

There's a scene in Ted Demme's 1996 film Beautiful Girls in which 29-year-old Willie (played movingly by Timothy Hutton) grapples with his feelings for a girl he can't have. He's sitting in an ice-fishing shack on a frozen lake, swigging something high-proof, and pouring his heart out to his meathead friend, Mo. "This girl is going to be amazing," Willie says. "She's smart, she's funny, she's hot--" And then Mo cuts in: "She's 13."

Natalie Portman was actually 15 when she played that small, beguiling role in Beautiful Girls. She stole every scene she was in--stole the whole movie according to the Los Angeles Times--and critics everywhere noticed the delicate little girl with the huge personality. It was something about her eyes. Her jarring sensuality. The truth is, she didn't do a single overtly sexy thing in the movie. Mostly, her character just hung out in her front yard flirting with Willie on her way to and from school, hauling a huge backpack around like a physics experiment, looking like she could tip over at any minute. It was almost like she wasn't even acting.

"I sort of think I'll never again achieve the performances of my early films," says Natalie, who is now 20 and has starred in eight feature films, including 1999's Star Wars Episode 1: The Phantom Menace, and last year's Where The Heart Is. "I'm very critical of myself. You become so much more self-conscious as you get older, and that's your worst enemy as an actor," she says knowingly. We're tucked away in a windowed alcove of a huge Chelsea photo studio, where Natalie has just spent the last eight hours in front of the camera, posing rather unselfconsciously for the cover of this magazine. She's changed out of the Prada dress she was wearing and into her own college clothes: black floods and green flip-flops, a tab-collared jean jacket and a top that bares most of her tan belly. As she tucks one leg under herself like a kid, it's easy to imagine that underneath all the purple eyeshadow she's wearing, she might still look 13. "This isn't the real me," she says, touching her face bashfully. "It's just leftover stuff from today."

"I sort of think I'll never again achieve the performances of my early films."

Natalie Portman's career was launched in a pizza parlor on Long Island when she was 11 years old. She'd spent her whole childhood singing and dancing in her family's basement ("I'd arrange pillows into rows on the floor, and charge the adults 10 cents to watch," she remembers). So when a Revlon talent scout approached her in the restaurant and asked if she was interested in modeling, she turned him down--but asked if he might know how she could get into performing. Their conversation led to her first audition, for a haunting Luc Besson film called The Professional. "I didn't really understand how intense the movie was from my audition," she says "But when I got the part, they gave me a script to take home. I remember crying when I read it. I was so excited."

Natalie starred as a hit man's apprentice in the dark, nervy thriller. In the first ten minutes of the movie, her character's entire family is murdered. She spends the rest of the film avenging her little brother's death with the help of Leon, a professional killer played by Jean Reno. Not exactly beginning-acting territory. "Luc was an incredible director," she says, "Anything I know about acting, I know from him. He would literally hold my hand, talking to me while I was shooting a scene. He'd bring me to whatever point I needed to reach."

The film was darkly sexual, very Lolita, and Natalie remembers that her parents endured heavy criticism after its release (even though there is not actual physical sex in the film--it's all a head trip for the viewer). Her gritty performance had been convincing enough to make critics shift in their theater seats, and they took out their discomfort on her family. "It really upset my mom and dad.  And it upset me," she says, giving the zipper on the jacket a tug. "They're the greatest, most protective parents in the world. But they're also great lovers of the arts, and they really trusted Luc."

Since then, her family has famously guarded its privacy. Portman is Natalie's grandmother's maiden name, and writers aren't supposed to report the name of her Long Island hometown or her New England Ivy League college. Until just recently, her mother accompanied her on every movie she filmed. Ironically, her parents began to get a bad rap in Hollywood for being overprotective. "My parents had their own concerns for me," says Natalie, "and on top of that, they had their concerns about what everyone would say about us too." Here's what we do know: Her father is a fertility specialist from Israel. Her mom is from Ohio. Natalie's a psychology major. For a while, she thought about ditching acting and becoming a doctor, until George Lucas called with an offer of the role Queen Amidala in a little trio of films mysteriously titled Episodes One, Two, and Three.

"You become so much more self-conscious as you get older, and that's your worst enemy as an actor."

Natalie turned down starring roles in The Ice Storm, Romeo + Juliet, and Lolita, for fear of exposing too much too early. But the offers persisted, and she quickly cornered the market on playing girls who were wise beyond their years. In a decade full of teen-sploitation movies, people couldn't get enough of a teenager who was just precocious enough to keep her clothes on and still exude sex appeal.

The studio we're in is 12 floors up, and the window looks down on Penn Station, where 20 train tracks run into the concrete building from each side. We've got a perfect view. Natalie is confident, not at all shy, but when I bring up the idea that she (and the characters she plays) seems to attract older men, she looks out the window at the trains intensely, slightly appalled. "It's weird, because I feel like everything I do is construed as being…" She won't finish her sentence. But then she laughs and faces me again." Some people are just gross. Like I remember reading some review of The Professional where the writer started describing my…" She twists up her face for effect. "Breast buds! I was just like, 'This is disgusting.'"

Two nights ago, Natalie and her friends celebrated her 20th birthday at a New York club called Suite 16. The event made the local tabloid paper, but for once she doesn't seem to mind the invasion. "It's a relief to finally be an adult," says the girl who's been acting like one ever since her career started. "I think it's a child-star syndrome to be really immature once you're old, because they said you acted like a little adult, never grew past that. Or being fake-smart without actually becoming smart. I'm trying to fight that," she laughs. "Although I think I might be losing the battle." She's clearly being self-deprecating. Nearly every profile written about her (from Vanity Fair  to Australian Vogue) has trumpeted her incredible work ethic, her near-perfect high school average, her countless drafts of a college application essay. It's true she's brilliant in a smarty-pants kind of way. (Given her preference, I think she'd rather spend our conversation talking about her college Modernist lit class than acting.) But now being smart will just be one part of her personality, not her entire modus operandi. And if she wants to take a part that involves a meaningful sex scene, she says she will. It shouldn't have to be controversial. "Now that I'm older, I realize that if you want to portray life, sex is a huge part of life," she says.

When Natalie left home for college in 1999 she told the press that the only acting she'd do during her four years of school would be for the Star Wars movies. But when I ask about her plans for the next few months, she seems to be hedging. "I'm looking at a few scripts," she confides. "I'm taking next semester off, but I haven't made any commitments yet. When I choose something, it will be for the director. I'm very director-oriented right now." She's quick to point out that she'll still graduate on time. All those Advanced Placement credits, you know. "I wish I could stay in school and act forever. I really like the combination."

Two days after we talk, Natalie will begin rehearsals for the Joseph Papp Public Theater's Shakespeare in the Park production of Anton Chekhov's The Seagull. It's the most start-studded Central Park summer play in years: Meryl Streep, Kevin Kline, Marcia Gay Harden, and Philip Seymour Hoffman all have parts. Mike Nichols is directing, and the adaptation is by Tom Stoppard. Natalie plays the part of Nina, a young actress who's having a messy affair with a much older man. She's taking the part very seriously. And studiously. "Last year, I was taking a class with a  professor in the Slavic department at school," she explains. "She helped me do a whole preparation for the first reading that Mike put together." When she found out the project was a go, she started an independent study on the play with her professor. "I've read all of Chekhov's other plays and I'm trying to get clues about my character, Nina, from his short stories, too." To hear Natalie describe Nina is to understand how her mind works, and how calculated and intense her passion is for the craft she's instinctively so good at.

"Nina's really complicated," she begins slowly, "On a very surface reading, she seems to be this innocent ingenue who's so entranced with the glory of leading an artistic life. So when she has an affair with Trigorin, an older man, the Kevin Kline character, at first you think, Oh, he's taking advantage of her. You think he has nothing better to do than destroy her like she's just some seagull shot down for sport." She pauses to let the play's central image sink in. "But there are all these little clues in the writing," she says, grinning mischievously. "And my reading is that she's sort of going after him. She's not the seagull, because in the end he hasn't destroyed her. She's calculated.  And she's not quite as innocent as you think." But of course. Still, it's the rare way she is able to hold innocence in reserve that's part of her appeal, and most likely why Natalie Portman's stardom is destined to endure. -- LAUREN SMITH