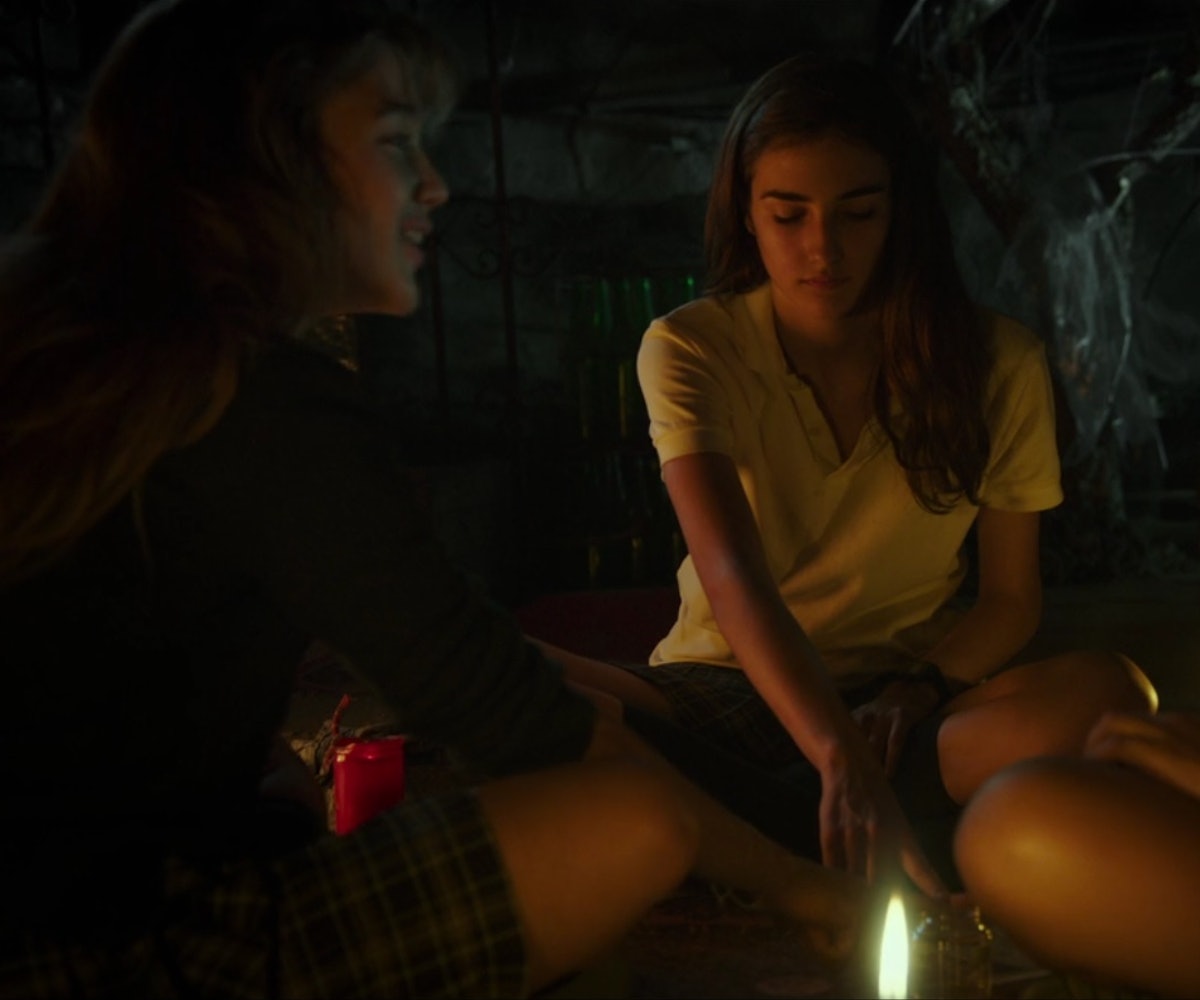 There's a scene in Verónica, the new Spanish horror film directed by REC filmmaker Paco Plaza, where, in the midst of absolute paranormal pandemonium, the titular character gets her first period. It's a pivotal coming-of-age moment marred by sheer demonic horror—made all the more visceral by the fact that the young protagonist has no adult to turn to for guidance. It's also representative of the inherent terror that comes with the inevitable shift from girlhood into womanhood.

Set in Madrid in 1991 and loosely based on real events, the film follows the daily tribulations (both mundane and supernatural) of 15-year-old Verónica, an earnest schoolgirl who, in the aftermath of her father's death and her mother's near round-the-clock diner shifts, is tasked with taking care of her three younger siblings. One day during an eerie solar eclipse, she steals away to the basement of her Catholic school with two girlfriends and an Ouija board, intent on contacting her deceased dad during a séance. And she does make contact—but with someone, or something, else.

From the moment her hand touches the Ouija board's planchette, Verónica's monotonous adolescent world unravels: Things go bump in the night, her little sisters and baby brother are seemingly tormented by a dark presence, lights begin to flicker and specters materialize intermittently throughout the apartment in which the teen resides with her family. It's a spooky affair—in one harrowing dinner scene, Verónica's torso convulses and stew begins spewing from her mouth, Exorcist-style, as her siblings watch in confusion—but the otherworldly entity haunting the teen is nothing compared to the specific horrors she faces as a teenage girl.

Though played as Paranormal Activity-style horror film, much of Verónica can be interpreted as the manifestation of the psychosexual anxieties that come with puberty and growing up. Verónica, played with nuance and compassion by precocious newcomer Sandra Escacena, is already weighed down by the maternal responsibilities thrust upon her by circumstance, which includes her distracted absentee mom (who, in all fairness, has her own burden to bear as a widow). But as her pubescent climax nears, things become even more difficult: friendships are torn apart over parties and pettiness, with Verónica becoming paranoid over her bestie's growing distance; grown men leer silently at her from the sidewalk as she takes her siblings to school; and Verónica is plunged further and further into social isolation, both at school and at home.

Like so many teenagers who have felt unseen and unheard by their parents (and, at the expense of sounding emo, society at large), Verónica's mother won't listen to her daughter's desperate cries for help. In fact, other than her young sisters, Lucia and Irene, and her brother, Antonito, no one takes Verónica seriously besides a blind nun, nicknamed “Mother Death," whose only aid comes in the form of vague exposition. It's a frustrating situation, and one many young women have faced—much like the disorienting revelation of Verónica's first menstruation, which arrives during a nightmarish scene and manifests as demonic Freudian stains that taint all the mattresses in her home.

Meanwhile, Verónica's ordeal is intensified by her duties as a premature caregiver. More than just a big sister, Verónica, only a child herself, is forced to enact the role of a mother as she feeds, bathes, and protects her little sisters and brother, from the moment she wakes to the moment she lays her head down to sleep.

And though her responsibilities are performed with compassion and dutiful care, the expectations set upon her tear at her in little ways that eventually morph into bigger, more subconscious fears: She snaps at a sister for failing to help with breakfast one morning; she becomes exasperated when her at-home duties impede her from accepting a party invitation; she accidentally burns her baby brother during a bath. In one macabre scene, vicious specters of her family rip into her flesh with their teeth; Verónica's anxieties as a girl coming of age, with all the expectations that transition carriers, are literally eating her alive. (The sequence also plays with the genre's penchant for body horror when it comes to terrorizing young female protagonists, drawing to mind films like Jennifer's Body, Raw, and Teeth.)

Though stylish, impressively well-cast, and atmospheric—though, the '90s nostalgia is never overpowering or distracting, and the film's innate spookiness is wonderfully slow-building—Verónica isn't the most unique horror entry in recent years (it bears strong similarities to Annabelle: Creation and Ouija: Origin of Evil), nor is it the best (Get Out or IT earns that prize). Where it succeeds, however, is in its ability to capture the micro-visceral terrors and anxieties that come with growing up as a teenage girl, an experience not so dissimilar to possession—that sense of feeling foreign in your own body, the isolation and uncertainty, the uncontrollable, sometimes scary changes, and the feeling of being totally alone and wholly different than before. As a horror movie, Plaza's latest entry is effective, at times compelling even; as a coming-of-age allegory, it's downright terrifying.

Verónica is available to watch on Netflix now.