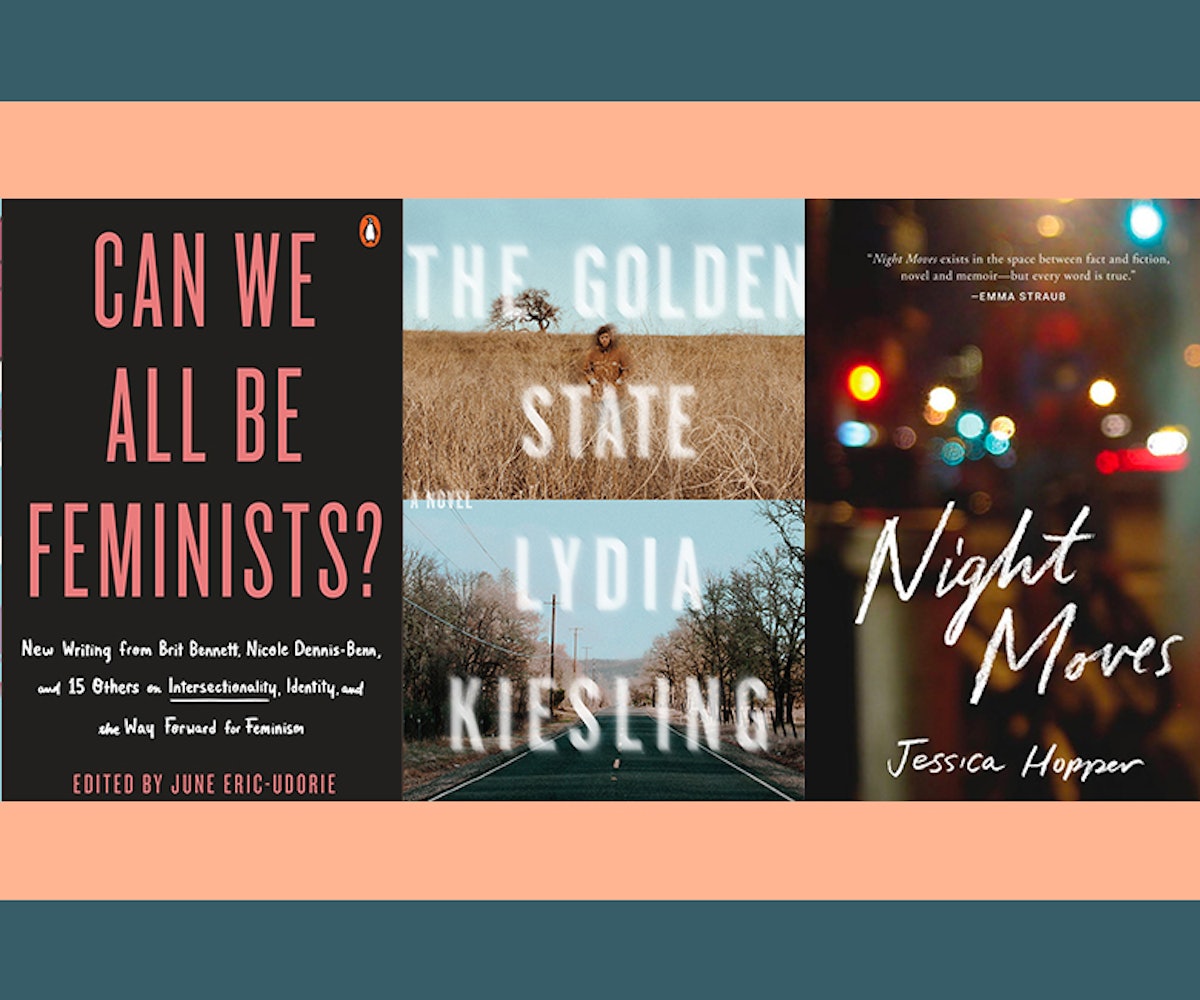 If you're looking for great books to read this month, look no further than the following dozen picks. Many of them can also be found on our big fall book preview, but a few additional choices are also listed below. Keep busy this month with one—or more!—of the following books.

Is there any more agonizing search than the one undertaken to find yourself? Not least because you can't help but be aware that this particular search might well have no end. And you might not even be aware of when it began. Leah Dieterich's memoir, Vanishing Twins, is filled with that specific sharp agony; it echoes with longing, vibrates with the effort Dieterich undergoes as she pushes the boundaries of who she is, both as an individual and within the context of her marriage. Within both realms—the individual and the partnered—Dieterich explores what it means to have options and to choose one thing over another; she and her husband open their marriage, and she explores what it means to expand and maintain connections to another person and to herself. All of this exploration is done in the kind of beautifully written fragments that lodge inside you after reading, so that you carry these thoughts around inside of you, exploring the themes until they become, if not your own, then something shared, and elevated, because of it.

A funny thing about motherhood is that it is a process by which a woman transforms herself into a home; suddenly, you are not just a person, but also you are a place, a sanctuary, a retreat, a destination. It can feel, sometimes, that you don't have as much room to be a person, anymore. Or at least not the person you once were. Motherhood and home are two of the themes with which Lydia Kiesling grapples in The Golden State, a lucid, lyrical look at the often alienating, disorienting experience of early motherhood, the way in which it frays at already unraveling nerves, and the way in which external realities contribute to that fraying, that fuzziness, when the fragility of the world around and within us becomes all too apparent.

This sprawling, beautiful novel follows the lives of three generations of women, mothers and daughters, whose lives are defined in ways over which they often have no control. It's an emotional, poignant look at the ways in which our dreams for ourselves often fall apart, and how even lives that seem quietly lived are filled with profound meaning for those living them. Matson explores themes of loss and alienation, motherhood and desire, aging and despair—and what it is to be a woman.

I can understand anyone's knee-jerk resistance to a book about an ultra-wealthy (he works in finance, naturally) married man who abandons it all—including his wife and child—in order to, like, find himself, but there is nothing easy to dismiss about Gary Shteyngart's complex, hilarious novel, which is an incisive portrayal of the ways in which the American Dream has failed everyone, leaving us grasping for meaning and unable to address those problems which money can't easily solve. It's a novel of jarring contradictions and the kind of absurd juxtapositions that are everywhere you look in our wildly unbalanced society, and Shteyngart navigates them with a fluidity and humor that is in turns cutting and compassionate, but always clear-sighted.

Can you imagine a world with no men? Don't worry if you can't; Aminder Dhaliwal does it for you in this smart, funny look at a dystopia (men have been wiped out by a birth defect) that actually kind of resembles something verging on utopian, as women are able to live free of the constraints of anything resembling the patriarchy, and can tell their own stories, make their own rules, and determine for themselves what it means to be happy, to be human, to be alive.

She Would Be King by Wayétu Moore (available September 11)

This stunning debut straddles the worlds of historical fiction and magical realism, interweaving the stories of three distinctly memorable characters as they navigate their respectively treacherous worlds, moving toward a place and time where they will meet one another and work out what it means to be free and to create your own future. The West African Gbessa, told by the wind, "If she was not a woman, she would be king"; Virginia plantation-born June Dey; and Jamaican Norman Aragon, the son of a slave and a British colonizer, all meet in Monrovia, the capital of the new nation of Liberia. It is an epic narrative, weaving together themes of diasporic conflict, the legacy of bondage, isolation, and community, and it offers a transcendent, important look at the ways in which the past is never fully behind us, and instead echoes throughout everything we do.

The Real Lolita: The Kidnapping of Sally Horner and the Novel that Scandalized the World by Sarah Weinman (available September 11)

Despite the fact that Vladimir Nabokov's Lolita is one of the most famous (and infamous) novels of the last 100 years, few people are aware of its real-life parallel: the kidnapping of Sally Horner, an event which Nabokov denied being inspired by, but which journalist Sarah Weinman has investigated in detail in this fascinating new book, offering new insight not only into the abduction of Horner but also the fascinating genesis and composition of Lolita. Weinman's book works brilliantly as both detective narrative and cultural history; she traveled around the country, visiting the places where Horner's kidnapper brought the young girl, as well as the many roadside motels where Nabokov and his wife stayed while he wrote (he composed his novels on index cards, which his wife then typed out) and hunted for butterflies. Weinman does uncover evidence of "what [Nabokov] knew about Sally Horner and when he knew it," but perhaps more importantly, she never loses sight of Horner as a person, she never reduces Horner into a simplistic version of a victim or an underage temptress. It might seem a small thing, to make clear that a girl or woman is more than just a victim, but it is a courtesy rarely extended by writers, and Weinman does more than just that: She gives us brilliant insight into a tragic story, but also a nuanced, empathetic look at the young girl at its center.

In this charming, witty YA debut, author Jen Doll introduces us to three teenagers in a small Alabama town whose lives collide thanks to their summer jobs at a store that resells the lost luggage that goes unclaimed at airports around the country. (Which, did you even know those stores existed?? I didn't, but am now fully committed to visiting one and seeing what I can find. Anyway.) Doris is a committed liberal who has never felt like she fit in—not only because she's surrounded by church-going conservatives, but also because a horrible experience she suffered at a formative age left her feeling ashamed and alone. While Doris is a social outcast, Grant is the opposite: a star quarterback with the perfect girlfriend. His life, though, is crumbling, because of a drinking problem whose roots are not being properly explored. Doris and Grant are joined by Nell, a recent transplant from Chicago who resents being made to leave her boyfriend for a new home; the three teens work together unpacking and reclaiming baggage both literal and figurative, and move to a profound understanding of the meaning of friendship and the importance of being honest with each other and with ourselves. Doll deftly navigates difficult topics like alcoholism, sexual assault, and racism with a compassion for her characters and her audience, making for a deeply engaging read that beautifully balances life's more profound moments with ones of levity and frivolity.

"Once upon a time, I lost something. Let's call it my 'shadow.'" So begins Liana Finck's strange, beautiful, pathos- and joy-filled graphic memoir, in which she explores what it means to be an artist, a daughter, a woman, a human; to be alive and to be yourself. It's a coming-of-age story and creation myth all wrapped up into one, and Finck fills it with moments that feel quietly miraculous, sublime in the manner of a lightning storm seen in the distance.

Allow yourself to be taken back to the time in your life when you felt the most free, as if every moment were that point where you lift your arms up into the air, as you descend down a slippery hill on a bike, locking eyes with your friend who is riding right next to you. That type of abandon, made all the more potent by the intimacy of experiencing it with friends, is perfectly captured in Jessica Hopper's Night Moves, in which she recounts in diaristic detail her time as a DJ in Chicago, as she went to underground parties and punk shows, when such a thing was still possible in parts of the city that have now been redefined by development. It's the perfect book for recapturing that lightning-like feeling of being young and wild and free, of feeling music in every part of your body.

There's never a time when it's easier to gain, if not fame, at least celebrity. But forget about 15 minutes—on the one hand, that length of time seems laughably long in the age of six-second videos, on the other, what happens on the internet stays on the internet, forever. Social media's ability to grant a person dizzying renown overnight is the foundation for Hank Green's debut novel, which centers around 23-year-old April May, who finds her world changed after she and her friend post a viral video about the Carls, enigmatic giant sculptures which are popping up all over the world. Soon, a world of intrigue opens up, demonstrating the insidiousness of the virtual world, and how easy it is to get swept up in something we don't fully understand.

Can We All Be Feminists? edited by June Eric-Udorie (available September 25)

An incredible collection of never-before-published essays by some of the most provocative, incisive writers working today—like Nicole Dennis-Benn, Gabrielle Bellot, Charlotte Shane, and more—this book offers profound insight into what it means to be a feminist, and how a commitment to gender equality means nothing without considering the importance of intersectionality. How do we move forward in a time of doubt and despair? There's no one answer, but reading this book is a step in the right direction.