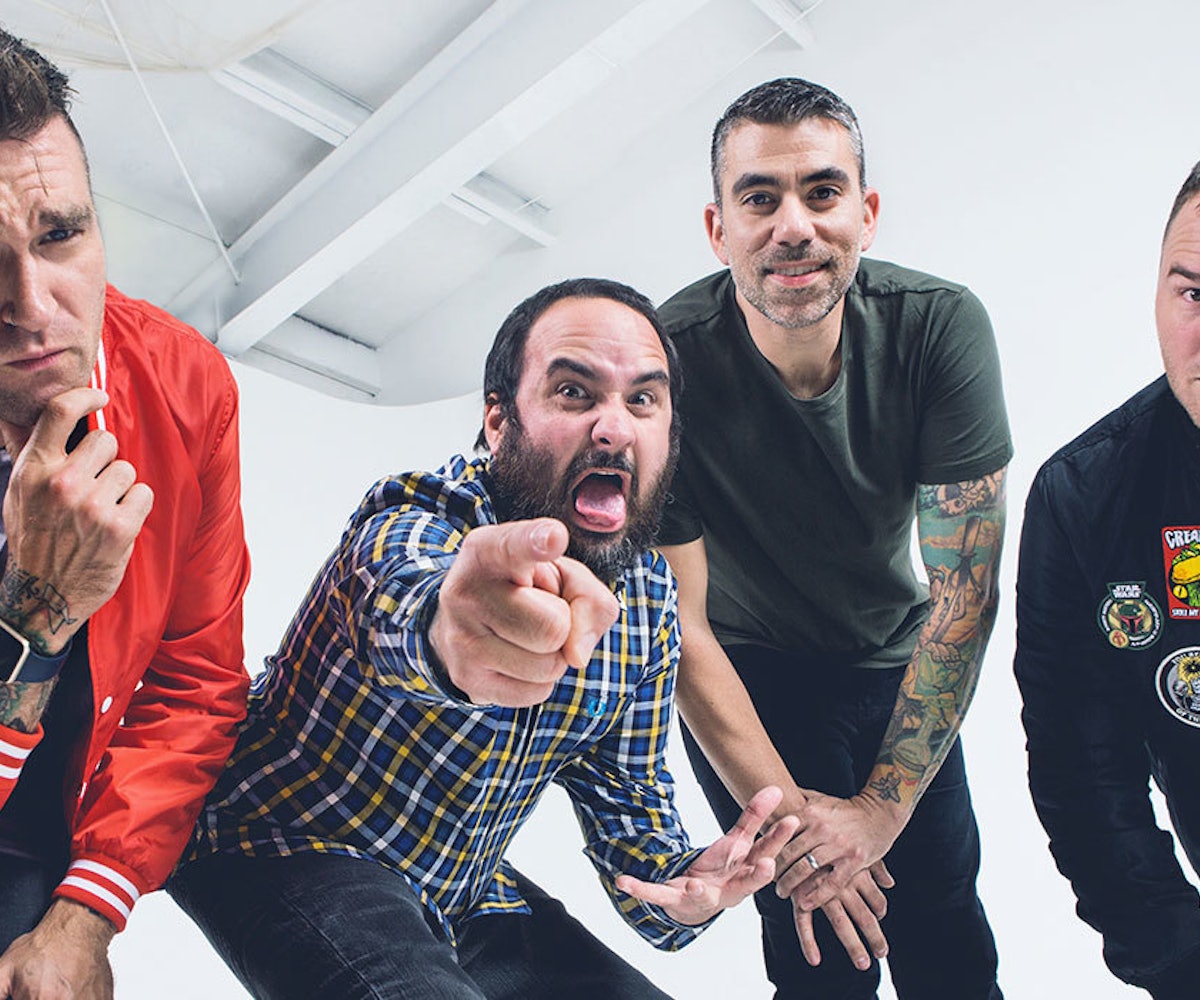 It will be long before you forget New Found Glory's name. The Florida quartet is a staple in the pop-punk scene, pioneers even. They've soundtracked two decades worth of teenage angst and the very real and very adult concern of purpose. With Makes Me Sick, New Found Glory's latest album, the band continues its history of punk experimentation, raging against the technology machine while acquiescing to it. That has, after all, been its strength—putting our collective frustrations into words and sounds worth letting go to; they're a mirror as much as they are a vessel for vulnerability and triumph.

For the band members, the first 20 years are just the beginning, as evidenced below in their colorful oral history. The glory is as much ours as it is theirs. Pop-punk is alive, it is well, and it is in good hands.

Early DaysCyrus Bolooki (drums): The first concert I ever attended in South Florida was at this small club called The Button South, which holds maybe 500 to 600 people. About two and a half years later, we got a call from a band called MxPx and were asked to open up for them, at that same venue. It was a total full circle. We had played a whole bunch of shows ourselves before that but in smaller venues, like pool halls; this was big. This was “I’m on stage now. I’m not watching anymore.”

Chad Gilbert (lead guitar): That tour was just four shows in Florida. I think when you write and play music, you want people to enjoy it, but you can't control what clicks with people and what doesn't. I remember when we recorded an early full-length [project], that wasn't released nationally but would sell some copies after our set. We were the no-names and sold maybe 600 CDs during those four shows, which, to us, showed that we’re clicking with people. For most of those people, it was their first time listening to us and they liked us enough to buy our CD.

CB: When we got picked up by MCA Records, the challenge was how do we market ourselves. They wanted to define us, and our name was totally arbitrary; we just wanted something to put on a flyer. So we threw New Found Glory out there and figured we’d use it until something else came. Of course, people attached and looked for meaning in it. So we used that to our advantage, saying “New Found Glory could mean anything.” That’s what the cover of that self-titled album is meant to convey. That’s when we realized this was bigger than just us as a band. It’s crazy that this name now has a reputation of its own.

Pop-Punk PioneersCG: When we were first starting out, there wasn’t a scene for our genre. There was blink-182 and there was Green Day, but there wasn’t pop-punk. Us and Saves the Day fell in between them.

Ian Grushka (bass guitar): Instead of trying to describe our music, I would always say we were a band that tours with other bands like Green Day.

CG: It’s hard to describe your own music without sounding pretentious. We have so many different styles [of] songs. Once our fans started labeling us as pop-punk, we just ran with it. It alienated some fans who didn’t want to be necessarily be associated with that particular sub-genre, but it also introduced us to a wider audience. At the end of the day, our music speaks for itself and really, we can’t control what our fans call us.

CB: If some random person comes up to me on the street and asks what my band sounds like, I usually just say we’re a rock band.

Jordan Pundik (lead vocals): It all really started to take on a life of its own, the pop-punk thing, when bands were coming out and getting popular, using our lyrics and song titles, like All Time Low.

CG: That’s from our song “Head On Collision.”

JP: [The band] Story So Far took its name from our song, “Story So Far.” When Fall Out Boy cited us as an influence, we were blown away.

Adjusting to the Internet AgeCG: MySpace was our low point, believe it or not. I think it was a little bit of ignorance and a little bit of pride that got the best of us. We had three gold albums before Coming Home. What could stop our momentum? MySpace came out, and we were already a big band. We thought we didn’t need it. We had one, but we didn’t see the value of promoting our music on it. Suddenly the whole scene changed. You had bands like Panic! At The Disco, Fall Out Boy—all these bands who would go to our shows, give us their demos, and look up to us—going platinum, all because of MySpace.

We were in a house in Malibu at that time, making Coming Home and thinking nothing could stop us. When we released it—iTunes and downloading music was still new—we went from selling 147,000 records to 34,000. It was a huge blow to our egos and a wake-up call. We made a very conscious decision to remember why we were making music in the first place. Of course, we had to learn to adapt to the rapidly changing industry, but that experience ultimately made our fan base stronger. Suddenly, there were people who were there from the beginning and those who were just discovering us through the internet.

JP: We keep our ear to the ground now when it comes to changes.

Keeping the Glory Alive with the FansCG: We were actually called A New Found Glory before we realized our fans couldn’t easily find our music at record stores. Were we under A or N?

CG: We definitely react to what’s happening and imagine what can happen. Like, for Coming Home, we were more introverted than usual. Never would we have predicted it would be most of our fans’ favorite albums—that, or Sticks and Stones. I think it’s why the record after Coming Home, [2009’s] Not Without A Fight, was so angry. It was a way to show we still had it.

CB: I remember when we were trying to come up with cool transitions and things we knew would go off live when we were writing Not Without A Fight. It’s also comforting knowing that Jordan’s voice makes anything sound like New Found Glory. That allows us to take chances.

The Real Glory—the MusicCG: We've never been so much concerned about adapting to what's popular at the time, and I think that's why we've lasted. "Twos and Threes" from our first record, Nothing Gold Can Stay, captures our beginnings. “Hit Or Miss,” “My Friends Over You,” and “All Downhill From Here” all show different sides of us.

IG: “It’s Not Your Fault” from Coming Home has a piano sound we experimented with, and “Call Me Anti-Social,” off our new record, plays with keyboards more than we ever have.

CB: You have to see us live. We’re so much more of a live band than anything. Our fans are welcoming and diverse.

Won’t Go Down Without a FightCG: We've been very fortunate that we haven't had to worry about there being a long lull. We've always either stayed steady or gone up. So to be able to do that—year 21, year 22— to kind of reinvent ourselves, do things like anniversary tours or a book, that’s fun. There are always new ideas coming through. That's what keeps it fresh and motivates us to continue this. We’ll sit back when we want to.

CB: There have definitely been times where we got tired, but we always realize everything we have is because we’ve been following our passion. The way music works now, we can take a break and then come back. It’s all about engagement.

CG: It took me a while to realize this: Just because a fan doesn’t show doesn’t mean you don’t have fans. Just because they might not be around for a certain part of your journey doesn't mean that they're not there. I love bands; I don't go see my favorite band every time, I can't. It's impossible. I think sometimes, people will think that it should be a certain level all the time, and if it isn't, then, "Oh no, you're failing." That’s hardly ever the case. If you keep doing it, they’ll keep up. We know that we know us better than anyone else.