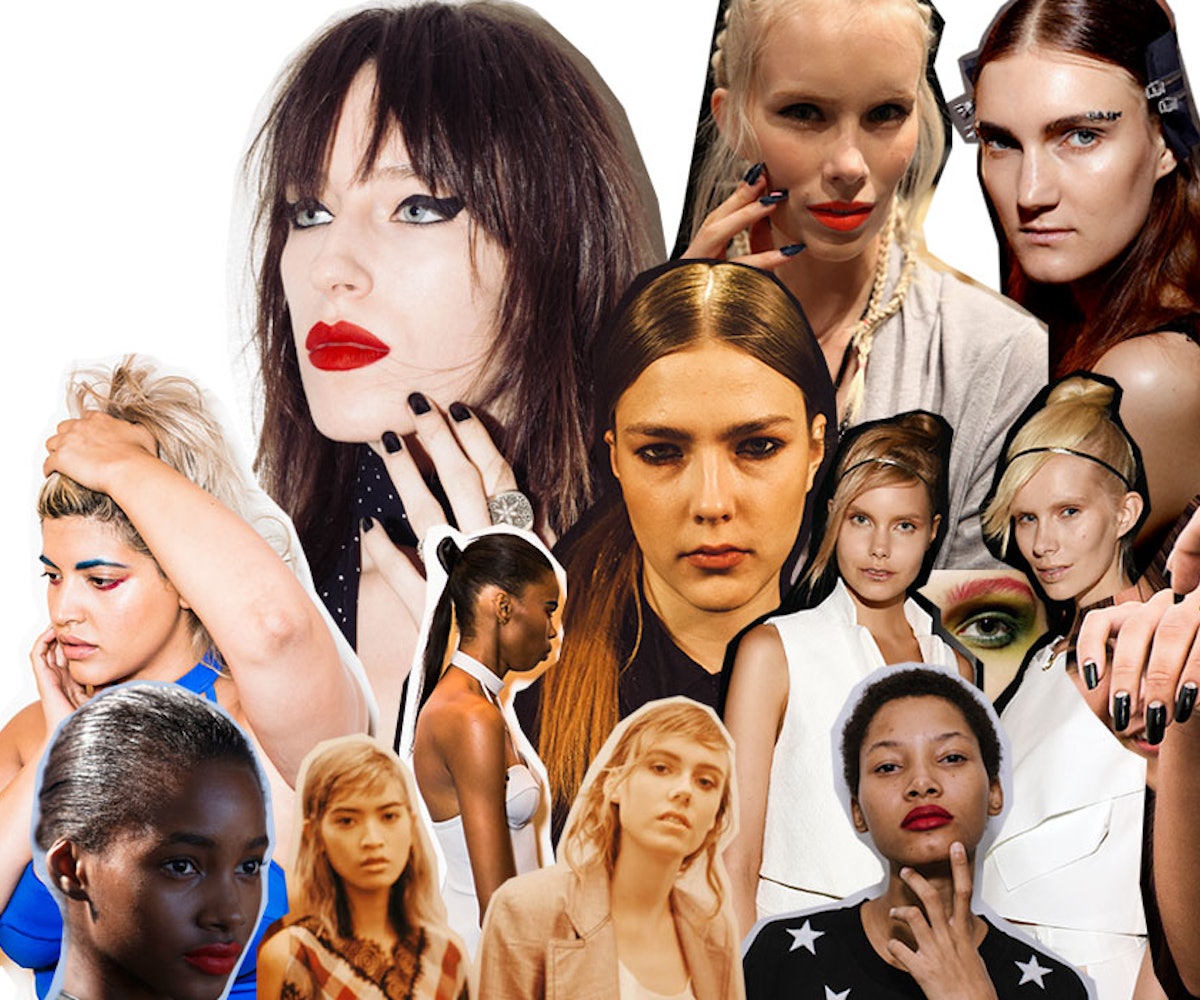 For New York City beauty editors, one of Fashion Week's greatest frustrations is the aggressive lack of makeup of recent seasons. "Just concealer where needed," the lead makeup artists would tell a semi-circle of editors backstage, insisting that the flawless, bare faces of the tall 19-year-olds around us was a trend, rather than the result of good genes and youth. It was a tough pill to swallow, especially for those of us who (A.) love makeup and/or (B.) don't feel comfortable without it on. This season, though, the no-makeup makeup thing took a backseat—and bold lipstick, dramatic eyes, and goth-inspired nails ruled the runways.

Hair, too, was anything but minimal. While many shows did rely on ye olde messy cool-girl hair, accomplished usually with dry shampoo and a curling iron, 'dos were much more elaborate than usual. It's going to make replicating the looks a little tricky, but hey—change is good.

Click through to see our top picks of this season's trends.

Bold summer lipstick is nothing new, but this season's lip vibe was less vibrant than we're used to seeing, with an emphasis on surprising shades of red and berry. Shows like Creatures of the Wind used just a NARS lip liner to create the perfect matte pout, while backstage at Jason Wu, lips were amped up to their fullest red potential with a combination of Maybelline's Color Sensational Vivide Matte Liquid (launching in 2016, unfortunately) in Rebel Red and Berry Boost. Meanwhile at Cushnie et Ochs, lips went full-on vampy berry with Maybelline's Lip Studio Color Blur in Plum Please.

Bold brows on the runway have become so ubiquitous that they hardly feel bold at all. To keep things interesting, makeup artists backstage at Chromat turned brows a primary blue, while at Sally La Pointe, they were adorned with sequins. Not exactly looks we'd want to roll up to work in, but perfect for an awesomely weird night out.

Nail-art queen Miss Pop told us on the first day of NYFW that this was about to be a thing, and boy, was she right. Where spring and summer nails usually lean heavily into pretty pinks and nudes, we were thrilled to see fingers and toes painted with blacks, metallics, and all the moody, goth hues in between.

Gone are the days of a low, minimalist ponytail with a sleek middle part. The ponytails swinging down the runway were made for a girl with a little extra time in the morning to get ready—or at least two extra hands. Looking for an easy way to elevate your own go-to 'do? Try creating a loose loop with your ponytail, like the look at Nicholas K, and securing it by wrapping a piece of hair at the loop's base.

If you're the kind of babe who wakes up with a bird's nest where your hair used to be, you're in luck: Models at cool-girl fave shows like Creatures of the Wind and Wes Gordon sauntered down the runway with the kind of greasy-frizz situations that usually happen to us by accident. So, no need to try for the whole "rich-girl hair" thing this spring—when the humitidy comes at you, just go with it. Don't have hair that likes to mess up on its own? A combo of Bumble and bumble's Thickening Hairspray and Surf Infusion worked into wet hair and then rough-dried with your fingers should do the trick.