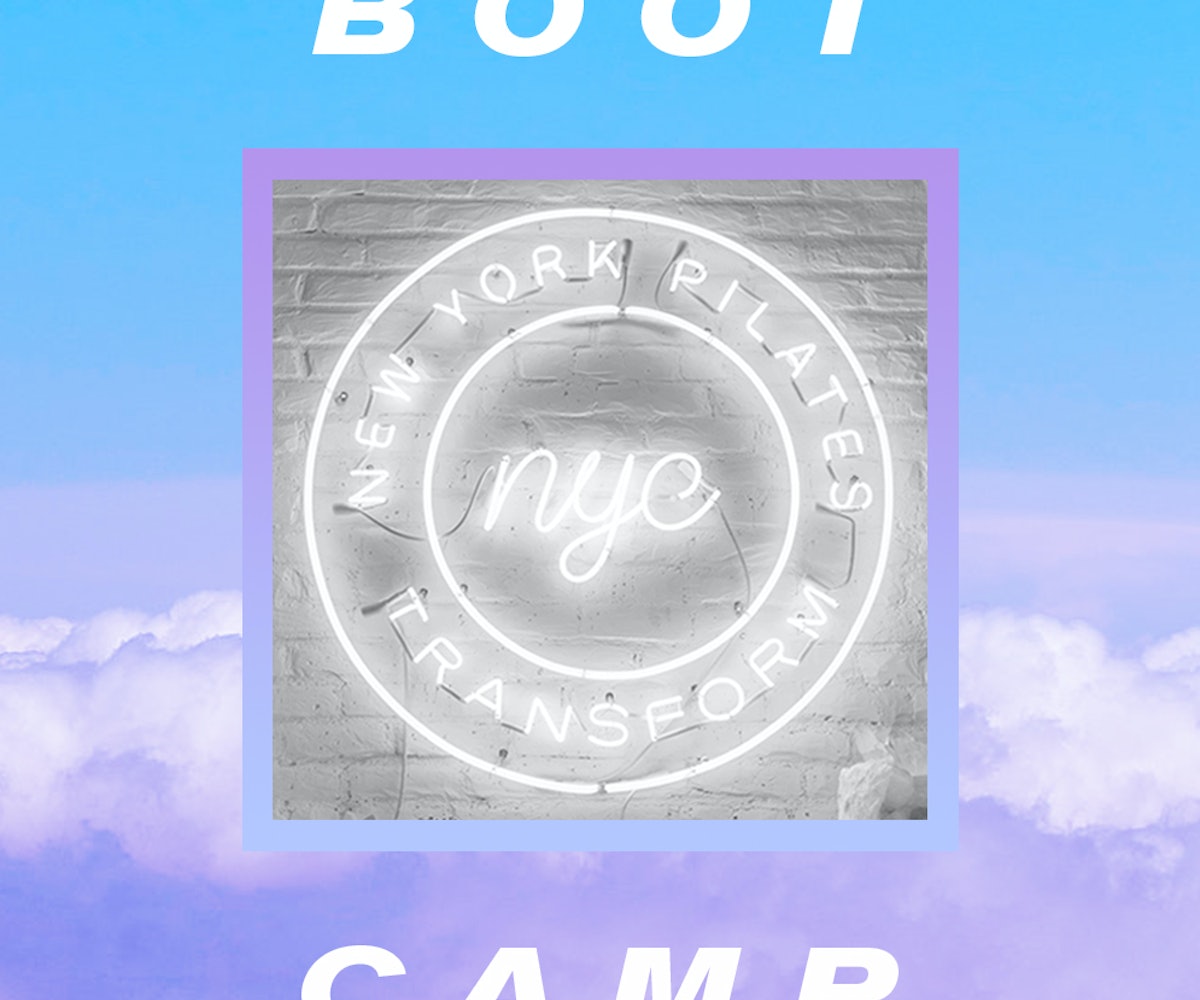 The first time I was asked to breathe sideways through my ribs, I was at a loss. I can breathe sideways? And my ribs are involved? How? Why have I never known this? These life-changing (well, maybe not life-changing, but definitely breath- and body-changing) questions came during my first Reformer I class at New York Pilates. As an addict of cycling and barre, I have always opted out of what I thought were less intense pilates and yoga classes. After deciding to participate in the staff challenge of doing a new fitness routine for a month, I settled on Reformer Pilates. It was a self-admitted cheat move as I couldn't imagine anything that hard about doing exercises atop a machine that seemed to do most of the work for you, even if it did promise a total body workout with a focus on strengthening my core, lifting my booty, and elongating and leaning out everything.

I selected New York Pilates after several people confirmed that it offered more fast-paced (read: less boring) classes than most pilates studios, a fact that Heather Andersen, founder and head instructor of the studio, confirmed before my first class. “We have very much of a fitness focus, so we definitely cater to younger clients versus a lot of more traditional studio environments that cater to older or injured clients. We can definitely accommodate injuries here, but things move faster,” says Andersen. “In the context of the younger fitness world, I think that it still feels very holistic, though.” The two cozy studios reinforce that vibe with crystals sprinkled behind the front desk, pillows to lounge on in the reception area, and organic beauty products in the bathrooms.

Things did move very fast for me in the first class. From the first few minutes, where you’re taught how to breathe and find the space in your lower back (“pretend there is a blueberry underneath your back that you don’t want to crush”), to the last stretch, I had to be corrected a lot by Meg Broome, the "lucky" instructor who got me as a newbie. Ever the meticulous student, I constantly worried that I wasn’t engaging the right muscles, breathing the right way (I blamed my ribs), or holding the correct form. “It's really important to us that we teach you how to coordinate using your abdominals, work on healthy alignment, drop your shoulders, and organize all your scapular muscles, all things that are important for healthy posture and healthy movement,” says Anderson. It was a lot to take in.

During my second Reformer I class, I did find myself less in my head. In addition to learning more about the machine (adjusting it to your height is virtually impossible without a one-on-one) and the basics of pilates, in the introductory classes, you are taught how to perform the abs-focused exercises that are designed to get you comfortable with the machine and hold the proper form. “Form is very important. One of the things that people love about pilates is that it is very injury preventative; you can get really strong and not injure yourself,” says Anderson. I was still adjusted a lot by the instructor (this time, Mariusz Kujawski) and discovered my range of flexibility, which wasn’t big at all (Mariusz assured me it would improve over time), but I no longer looked like a sprawling baby when making circles with my feet in the air in the end.

As advised by Andersen, I went to class at least three times a week and did five Reformer I sessions before moving onto to Reformer II and the more fitness-based Abs/Arms/Ass. It was then that I realized how difficult, intense, and fast pilates could be and not only found my abs, but also the pain that comes with that discovery. With Reformer II, the biggest difference was the diversity of exercises. While the difficulty level change seemed subtle to me, the speed and the range of exercises forced me to engaged every one of my muscles, even ones that I didn't know existed. Abs/Arms/Ass class proved to be the toughest of all for me, with my newly defined abs and arms gently crying after each class.

It's the effectiveness of pilates on the appearance of the abdominal region that Andersen quotes as being the main reason that clients come to her. “Everyone wants better abs. I think what will happen a lot of the times is that people will come in for that reason, and they'll definitely get better abs,” she says. “The other thing that happens is they'll be like, 'I'm not in pain, my back doesn't hurt anymore, I'm sitting at my desk and my hips don't hurt.' Those kinds of things really happen from the functional strengthening of your joints.” For my part, I noticed that my back, neck, and shoulders stopped carrying as much pressure.

But if the fact that you’re laying or sitting on the Reformer machines for practically all of class makes you think that you’ll skip the dreaded planks and push-ups, you can forget about it. You will instead do the exercises on top of the machine. “There will be familiar exercises you're used to doing in the gym, but we are doing them in a pilates way, which means that we are talking about how you are using your abdominals, the angles of your joints, the organization of your pelvis, and how to do those [exercises] really safely and efficiently,” says Andersen. “And then we add resistance or reduce resistance depending on the exercise that can make it more challenging.”

The redemption for that will be found during the Stretch class, which Andersen describes as a “super-luxurious” experience where you get to stretch out every part of your body. “Stretching is really important because we sit all day. And the way that we live our lives is very compacted. There is stretching that happens in all the regular classes, but it's not going to be the same in a 55-minute class, where we only spend up to 10 minutes stretching, versus an entire hour devoted to just, like, bringing out all the kinks.” Since I was initially obsessed with working on my abs, I wasn’t sold on the idea of a class devoted solely to stretching; but I was forced to take one at 8:30pm after a long day of work when I accidentally signed up for that instead of Reformer II. Before we began, the instructor, Arianna Henry, asked each student about their needs. After I told her about my short hamstrings, which makes stretching an exercise in its own right for me, she spent the next hour keeping that in mind and adjusting me frequently throughout class. With every muscle from the ones in my neck to the ones in every finger and toe stretched out to the maximum, this was the most meditative and self-care inducing class I have ever taken.

The beauty (or bane of existence depending on your half-cup view) of NYP classes, is that the minute you think you’ve gotten a grasp of the exercise, the instructor will switch the move out on you or suggest a tip to improve your form, which keeps things fun and challenging. One of my last, and most enjoyable, classes was with Rachel Cohen, who was one of my favorite instructors at the studio. She not only introduced new moves into my routine but also showed me that there is a whole part of the Reformer machine that I hadn't known previously existed. Imagine: the bar goes backward and you use it to sit atop the machine while pushing the shoulder blocks with your feet. The second best part is that you don't sweat much (or sometimes even at all) during classes, which makes it for the perfect pre-work or -brunch workout.

When my month came to a close, I not only discovered that I stood taller, but I was also proud of the beginner abs that I have uncovered—and these benefits came with less back, shoulder, and joint pains overall. I was ready for Reformer III and Cult Jump classes (a more cardio-focused form of pilates that you can take after several rounds of Reformer II). I also realized that I carried the lessons outside the studio and I began to take the time to just breathe during my everyday activities and regular workouts. Sometimes I even do so sideways through my ribs. I guess you could call me reformed.