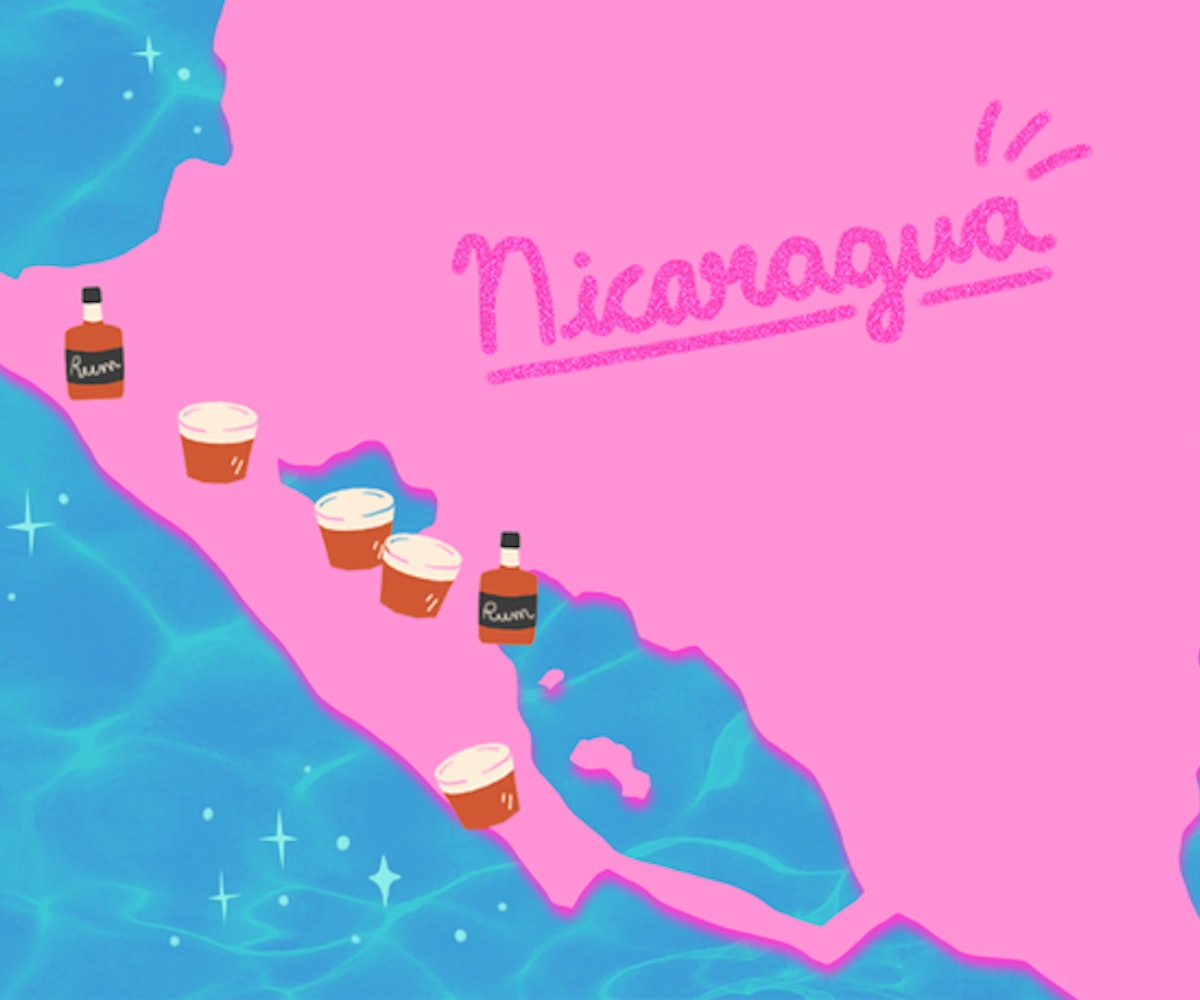 “If you take away anything from this trip, I hope it’s how beautiful this country is and how wonderful its people are,” I was told during dinner on my first night in Nicaragua. I’d just arrived a few hours earlier to Managua, the capital city, for a five-day trip to see the distillery of Flor de Caña's, the 125-plus-year, award-winning Nicaraguan rum. That's why I was in Nica officially, at least; unofficially, I was there to see if I could overcome my aversion to and come to appreciate the drink that I'd had a really bad experience with in college, one of those rites of passage ordeals that makes you swear off a particular spirit forever. I was maybe a little skeptical but open to what lay ahead of me.

It was the next morning, as I was looking out of the bus taking me to Chichigalpa where the distillery is located, that I began to understand why so many people have extolled the beauty of the "Land of Lakes and Volcanoes," a nickname that Nica has acquired for its 19 active volcanoes and roughly equal number of lagoons. When Mark Twain famously steamed down the Río San Juan in 1866 on his way to New York City from San Francisco, he marveled at how the “bright green hills never looked so welcome, so enchanting, so altogether lovely.” Many decades later and from a moving bus instead of a boat, the unspoiled beauty of Nicaragua’s green-topped mountains and endless rainforests full of untamed groves of trees remains as magical a sight.

It would be easy to mistake Flor de Caña as Nicaragua’s national drink (though that's actually Macuá, a concoction of rum and guava and lemon/lime juices, that’s handed to you like a mimosa, meaning as early as 10am), especially when you see the brand logo adorning everything from restaurant umbrellas to merchandise sold on the streets. Walking into Flor de Caña's distillery, the scenery seemed familiar, but that was because it is—the bottle's label borrows from the skyline that surrounds the distillery. This, too, makes sense because that scenery is spectacular and features the San Cristobal volcano, an active volcano at the base of which the sugar cane used to craft the rum grows; the nutrient-rich soil contributes to a richer rum molasses and, in turn, smoother taste.

Even with a rum as young as Flor de Caña 4, the taste is remarkably rich; I could feel the liquor come alive with warmth on my tongue. This liveliness was not that surprising once I considered—and touched—its source. After hiking the Cerro Negro, an active black sand volcano in the Cordillera de los Maribios mountain range an hour and a half from the distillery, I stuck my hand in the charcoal-like sand at the 1,500-foot-plus outlook. It felt hot, pulsing, as if it were in preparation to erupt—as it does approximately every 20 or so years. It’s fine, we are still three years away from the two-decade mark, I told myself. The wild gushing winds swatted at me as if in an attempt to dissuade visitors from spoiling the humbling beauty that is the view, that sees rainforest greenery crashing into mountain tops that, in turn, rise into the blue skies and disappear into the clouds. As if in defiance of the passersby, too, the Cerro Negro has only one way up; to get back down, you have to volcano surf on a board at an adrenaline-inducing speed.

By the time you make it down the gravely steep, pebble-thrusting mountain, you feel exuberant, too. I climbed into the back of a truck and sipped on a youngish but robust brown rum with notes of banana, honey, and cinnamon. It serves as a warm relief from the cold wind. It's liquid courage, proof that I am as alive as my surroundings in a country that vibrates with mystic energy.

Each of numbers on the rum varieties, from Flor de Caña 4 to Flor de Caña Centenario 25, represents the number of years that the rum was naturally aged in bourbon-soaked oak barrels sealed with banana leaves. As you walk through the distillery, which has been owned by the Pellas family for five generations, you're invited to see every process of the single estate production. ("Single estate" means that every element is sown, grown, cultivated, and aged on the property.) You can see the craftsmen seal the oak boards to make the barrels under a roofed open space and feel the humidity and heat that contributes to the rum evaporating from the barrel pores, resulting in a liquid full of character beyond its age, as you stand in the dark room where the barrels are aged. The fumes in that room are enough to make you feel drunk; though, if you want to actually get a buzz, yes, there's a tasting room too.

It was fumes of a different, though not wholly dissimilar, sort that I felt crowding up on me as I stood on the rim of the Masaya Volcano National Park, after spending a night in León. As I glanced down the active crater, also known as the "Gate of Hell," I understood the menacing nickname that the Spaniard invaders gave it. While you can't see the bubbling lava during the day—the sulfur dioxide gas clouds the view and prevents anyone from lingering too long for safety reasons—you can sense the power that's boiling underneath, growing stronger with age and threatening to erupt at any time—and take you down with it. In quiet whispers, I overheard, from a nearby tour guide, that one of the best times to visit the Masaya is at night when you can actually see and hear the heaving red lava doing its work.

At the Masaya Crafts Market, I wandered through the numerous vendor stands filled with the hammocks the town is known for making, and masks that are employed in the many celebrations that take over the city, including one that involves dressing dogs up as humans and taking them to church, I couldn't help but marvel over the artisan's skills that, the merchants proudly tell me, have been passed down for generations.

It's that regard for family and pride that I noted as I spoke to Nicaraguans, with everyone working to preserve the history and skills that have been lovingly handed down to them. This desire also carries over to preserving the nature that Nicaragua has plenty of. Flor de Caña makes a point to make its rum with virtually 100 percent renewable energy and recycle much of the water that goes into the production of any liquor, including its own. As we get down to the Apoyo Lagoon, a natural reserve and crater lake formed as a result of a volcano explosion, I am amazed how this blue haven surrounded by impressionist painting-like green hillsides is entirely empty. It turns out only one boat, that works on propane gas instead of gasoline, is allowed on the water here as a means of preserving the pristine natural area.

As I swam through the crystal clear water of the lagoon, it was impossible not to feel small and insignificant in comparison to the unspoiled flora surrounding me. It is rare nowadays to discover a place where you can feel so utterly alone. Within seconds, though, the skies turned gray and a downpour of pelting water hit my face. As I scrambled out of the water, I found cover under the barely there roof of the boat. As I watch the rain pass by and the skies open up again, I am reminded that that's the thing with Mother Nature, it can turn on you in a second.

Granada is where I found myself next. The former capital boasts stunning Spanish colonial architecture, bustling squares, horse-drawn carriage city tours, a vibrant food and bar scene, and the cutest hotels you'll find anywhere. (For proof, check out Tribal Hotel, a seven-room boutique property that draws inspiration from the Copacabana and features the most Instagrammble pool you'll see, as well as intricately decorated rooms with one-of-a-kind local artisan treasures, and Hotel Casa Lucia, a chic accommodation oasis that doubles as a yoga retreat with daily rooftop yoga classes and a cocktail bar that offers natural juices, as well as a delicious local craft beer.) As I ate an incredibly flavorful whole branzino at nearby restaurant El Zaguán, I got a taste for Flor de Caña Centenario 12, a premium rum redolent of baking spices and tobacco, full of personality and adventure, much like the expat-heavy city itself that has much to offer in terms of history, art, and nightlife.

The next day, I was back in the water, this time in Lake Nicaragua ("as big as the entire country of Puerto Rico," one local tells me). I am heading to the famed islets of Granada, a collection of 365 ("one for every day of the year," another local tells me) small islands created following a Mombacho volcano explosion thousands of years ago. While many of the islands are untouched and rich in vegetation and bird life, lots of others boast luxurious private homes and even boutique hotels. But, for me, the highlight appeared on the way to the islets, when the boat stopped in a lagoon with water so warm it felt like it was hugging my body. These are the rare fresh waters that attract sharks who, despite the lack of salt content, don't stray too far from the otherwise serene lake, which admittedly does eventually connect to the ocean.

Hours later and begrudgingly out of the water, we drove to Guacalito de La Isla, the most popular destination in Nicaragua for beach travelers and surfers alike, and stop in the middle of the road to watch one of the most scenic pink-hued sunsets I have ever seen. With a cloud located right above the tip of one of the mountains and surrounded by lavender skies, it created an illusion of duality, a place that's both here and there, rooted in history and looking at the future, a place that's of this earth but also of somewhere else, somewhere unknown.

At the Mukul Resort, the most luxurious property in the area, where every bohio has its own plunge pool and the spa six separate sanctuaries, on my second last night I was greeted with a giant beach bonfire and star full of stars. As "The Girl from Ipanema" started playing, courtesy of a live band that soundtracked a nearby dinner, I approached the flames, and looked up at the Milky Way and found myself completely enamored with this constellation, beach, country, and, most surprisingly, the rum in my hand, an insatiable fire burning in front of me, not unlike the fierce love you develop suddenly and unexpectedly for a place previously unknown, but that you can now call home.

So it actually might have been the opposite of what I was told that first night. It was through the beautiful country of Nicaragua and its people that I grew an appreciation for a drink I thought I'd never come around to, let alone feel strongly about.