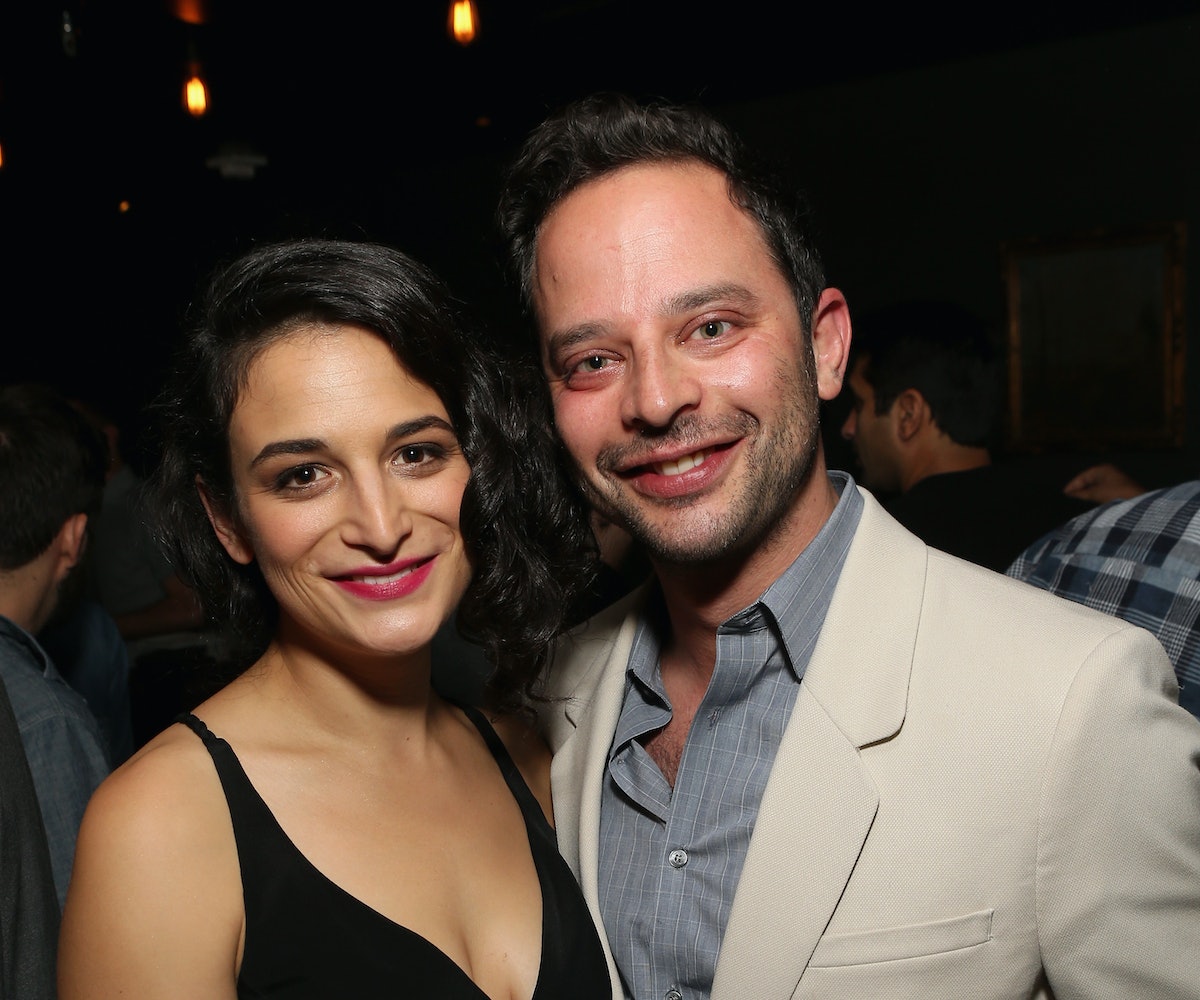 Nick Kroll and Jenny Slate have been friends for over a decade, dating back to the time they first met at now-defunct New York comedy club Rififi, which Kroll once described as smelling "like a bag of Doritos had thrown up." Back then, they were stand-up comedians, hoping their presence on stage—any stage—would lead to other opportunities in show business. That's exactly what happened, with Kroll eventually establishing himself as a sketch comedy visionary on his popular Comedy Central series, The Kroll Show, while Slate bounced back from a short stint on Saturday Night Live to break hearts with her transcendent performance in 2014's romantic comedy Obvious Child.

Today, Kroll and Slate are established movie actors, something they both say was a goal from day one. And while they've acted together before, My Blind Brother is the first time they've played romantic leads in the same film. Sophie Goodhart's winning romantic comedy follows Kroll's Bill, as he tries to escape the shadow of his more athletically gifted brother Robbie (Adam Scott), who also happens to be blind. Things get especially heated when Slate's character Rose comes between them. We recently spoke to Kroll and Slate over the phone about breaking into the film world through the comedy world and what their own siblings think about their fame.

When you guys met in a comedy club more than 10 years ago, did you ever think you’d be making a movie together? Or making a movie, period?Jenny Slate: I don't know. I think it makes sense to me. When I started doing comedy, it definitely was, for the most part, because I wanted to be an actress and I couldn't figure out a way to break into the industry in a way that didn't feel degrading or typical or irritating. Getting up on stage was a good way to show who I was and to feel empowered. I didn't really know where that would lead. It feels really nice that the people I started with are the people that I continue to grow with.

Nick, was it ever your intention to act in movies, or was rising the comedy ranks always the goal for you?Nick Kroll: Yeah, I don't know if it's a question of what you can see yourself doing or what I would allow myself to see. It's weird because, for me at least, I was like, if I was being honest with who I was, I probably would have said, "Yeah, I would love to be acting in movies," but I don't think I really even... it's been such a slow, not slow, but steady progression of work of what you're allowed to do. Like, what they'll let you do. So, this feels like a nice culmination of slowly and steadily trying to do different things and showing that I'm capable of doing different things. People giving me the opportunity to try.

This is a movie about a complicated relationship between siblings. Given that you both have multiple siblings, what do they think about the level of fame and recognition you guys have achieved? How does it affect your relationship?NK: I think mine are really proud of me and get a real kick out of the work. It can be weird for them to be out at dinner and have me be recognized, but as far as the work goes, it's very nice that both Jenny and I are lucky to have siblings who are excited and would never wanna do what we do. I can't speak for Jenny.

NK: So, they're happy and sort of mystified by what I do. Not mystified, but just like it's this crazy thing. It's a very nice element to have your siblings be a fan.

JS: It's the same for me. I have two sisters and neither one of them are performers, but they're both very creative people and my parents are both artists, so I think it's just kind of like I'm doing a slightly different thing than our family does, but I don't know. I think they just see me as me, and they're happy for me and happy that I'm employed.