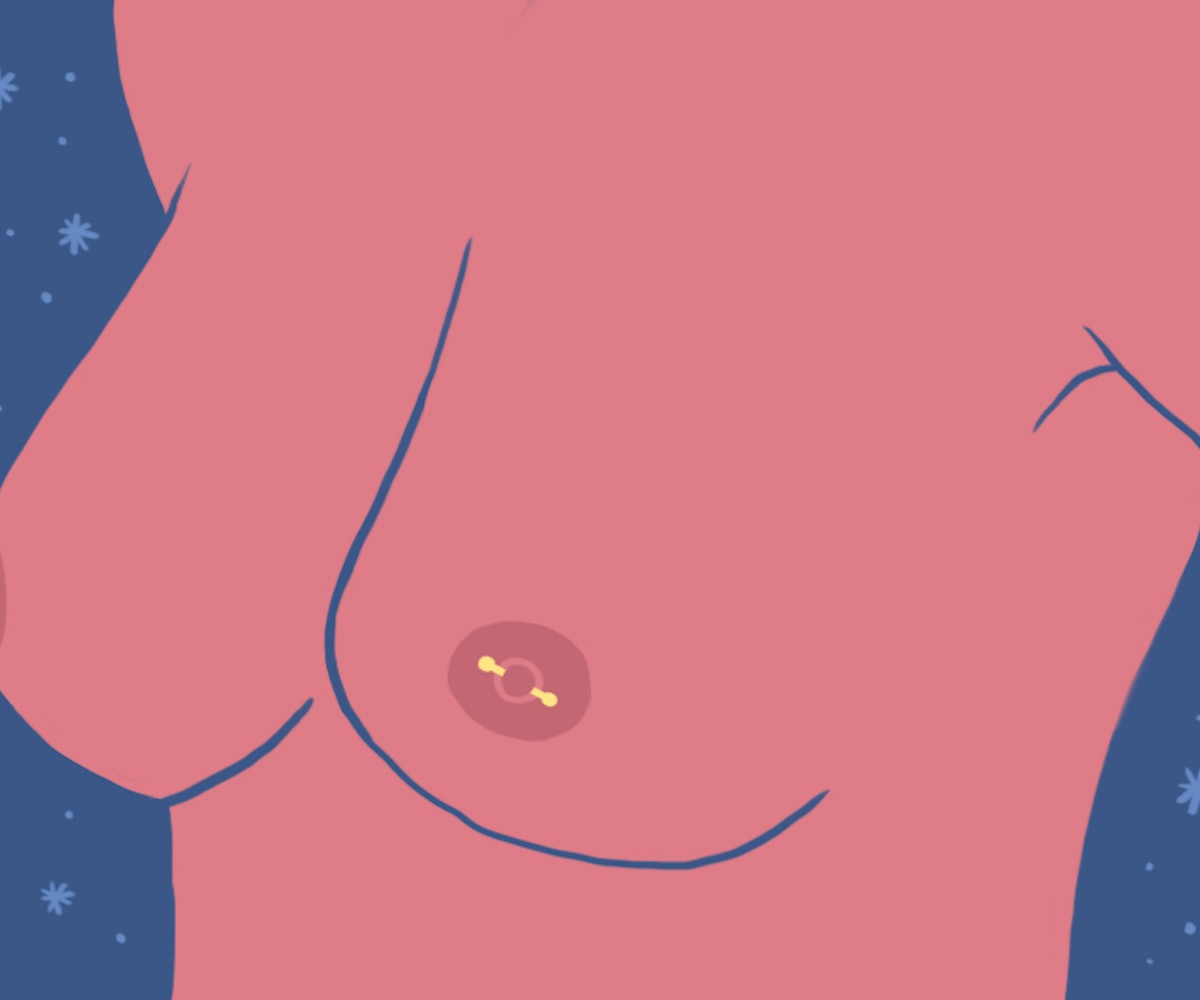 Don’t tell my mom, but I got my nipple pierced on my 21st birthday. I was sober (surprise), and I guess you could say it was during my "rebellious" stage. I took it out a couple of years ago after a particularly scary NSFW happening that forced me to choose the well-being of my areola over vanity, and I miss it every day. That’s an exaggeration, but I do miss the feeling it gave me—something a little wicked, and a lot subversive.

Nipple piercings have a certain intrigue to them; mostly because you don't know who has one unless they show you, which means they're probably showing you a whole lot more. They're mysterious and definitely sexy. Rihanna—as anyone who has seen the “Wild Thoughts” video… and the “Work” video… and the “Needed Me” video—has one, so clearly they're desirable. But though many people have doubtlessly considered getting this piercing, it can be an intimidating one to actually get. But don't be afraid: As Brian Keith Thompson of Body Electric and Cassi Lopez of New York Adorned tell me, anyone can get it done.

“I’ve never met a nipple that I couldn’t pierce,” both tell me. Meaning, every nipple shape—flat, inverted, protruding—can be decorated as its bearer sees fit. The only people that can’t get a nipple piercing, Thompson says, “are the ones who are too chicken to walk up the stairs to make it happen.”

That’s not to say there won't be some pre-piercing apprehension. There will be! That’s normal! “It's natural. We all feel it,” Thompson assures. “The people that don't get nervous, those are the crazy ones.” If the source of that nervousness has to do with how much the piercing is going to hurt, though, it’s misplaced.

I’m not going to say a nipple piercing doesn’t hurt because a needle going through any part of your body is going to send some type of jolt through you, but it’s very short-lived feeling (like, two seconds short). As Lopez notes, there isn’t a lingering pain afterward. “Pain is such a minuscule part of the whole thing… it’s mostly in your mind,” Thompson adds. “I've had very few clients who have told me it's intolerable. The first thing they usually say is, 'Oh, that's it?'” What you should be worried about, he says, is the next six to eight months of care.

Maybe worried is the wrong word, but you should definitely be cognizant of what goes into caring for a piercing. Though, in and of itself, the maintenance is pretty simple. Lopez recommends investing in a little saline spray, which you should spritz on the piercing twice a day. While Thompson recommends using soap (Dr. Bronner’s is his go-to) and water. He adds: “Don't play with it. It's not a puppy—no spinning, no turning—keep your hands off of it. All that’s required of you is washing the surface bacteria off, to avoid a local infection, the body's got everything else covered. If you do those things, you're not going to have a problem.”

How long it takes to heal differs by person, but, typically, it takes six months to a year. A couple of things that will help speed up the process include carefully planning when you get it done. Lopez advises that summertime isn’t the best necessarily, especially if you’re going to be heading to the beach or pool. You can get a piercing done then, just be wary if you’re going to be submerging the piercing in any kind of body of water for a long period of time.

Another factor that will determine how fast your piercing heels is the jewelry you choose. The type of jewelry—barbell or ring—is typically up to the client. When I got mine done, the piercer would only use a barbell, and both Thompson and Lopez prefer barbells over rings. “A barbell, 100 percent, is going to heal better,” Lopez says. “Even when you’re healed, a barbell can be way more comfortable.” You can heal a hoop, Thompson says, you just have to be more cautious. “Right now, it's way more popular to pierce with barbells, and I think, aesthetically, barbells look more pleasing to the eye anyway. They're less intrusive, and if you want to wear a shirt without a bra you can kind of see it, but you kind of can't—there's something cool about that," he says. If you want to change your jewelry once it’s healed, that’s an option, too. Just make sure to go back to your piercer to do so.

Know how we mentioned earlier that everyone can get a nipple piercing? That’s still true but, Thompson notes, not everyone can heal one. It’s rare (Thompson says he’s only seen it in about 10 percent of his clients), but some people might find that, over time, their body rejects the jewelry. What that means is the jewelry will start to migrate, and you’ll notice it getting shallower in the nipple. “That’s the body slowly pushing it out,” Thompson says. If this happens, go back to your local piercer and have them remove it before it pushes itself all the way out. “If you take it out early enough, you'll have minimal scarring.”

Now, about those misconceptions you’ve likely heard rumblings about. First, breastfeeding: You can still do it, both Thompson and Lopez assure. “You have hundreds of milk ducts in each nipple, it will not affect it at all,” Thompson says. Another is that the piercing will increase your nipple's sensitivity. Wrong again. “It will make the nipple protrude a little bit more. So if you have flat nipples, it will kind of stand up because the barbell is underneath them,” Thompson explains. “When you first get it pierced, of course, they're more sensitive because you just put a needle through it, and I think that's where people get the misconception from. But once they fully heal, they will go back to the way they were.”