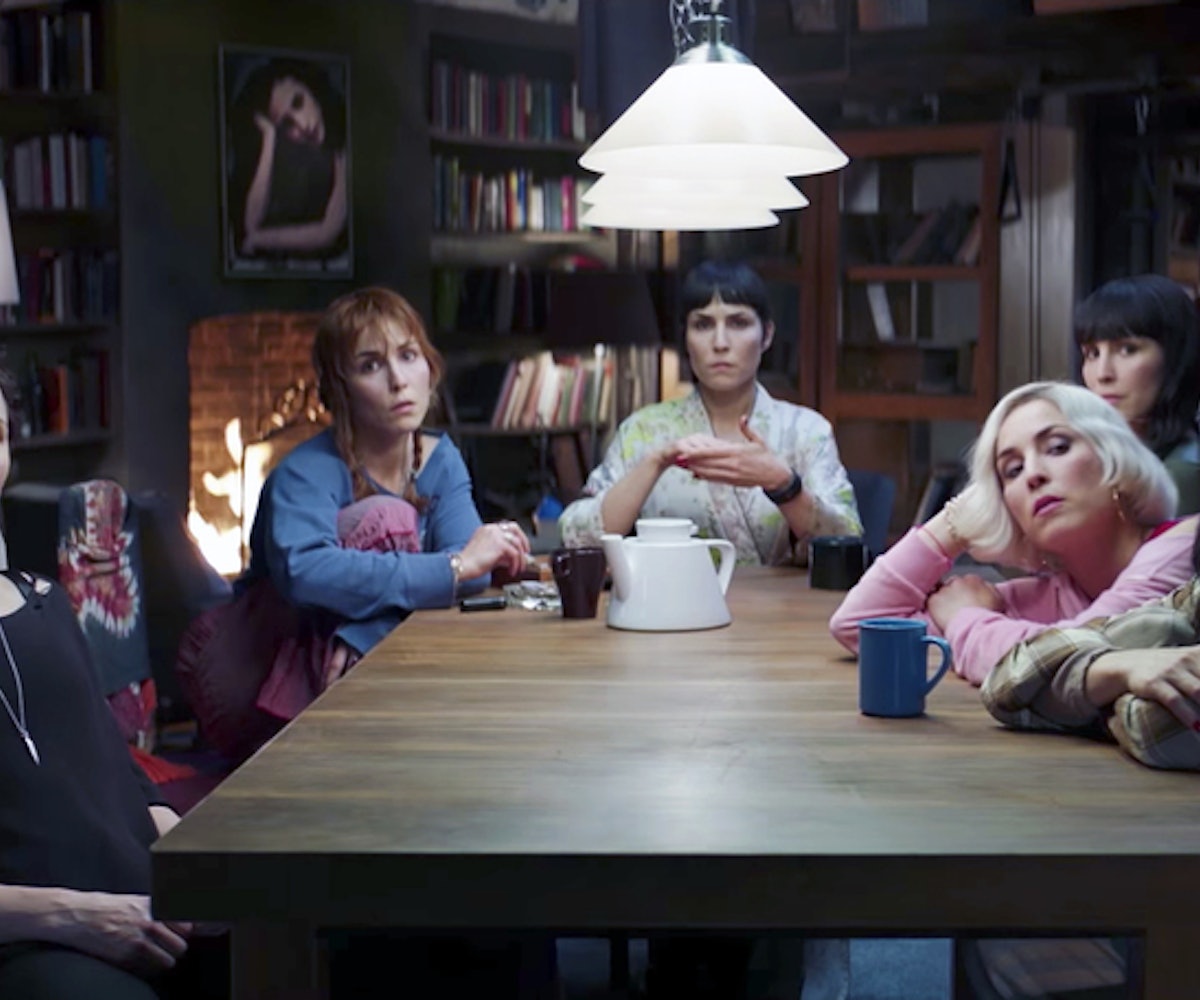 Playing opposite a CGI character is tough enough on an actor. Playing opposite six CGI characters is another thing entirely. But to then go back and play each of those six roles as well, giving an ensemble’s worth of distinct performances then composited into a one-woman tour de force? That’s the sort of herculean challenge that caught Noomi Rapace’s interest. The former Girl With the Dragon Tattoo star tackled the most intimidating undertaking of her career as a set of septuplets named after days of the week in Netflix’s new sci-fi film What Happened to Monday. Living underground in a future dystopia where multiple children have been banned, the seven sisters fall into peril and must rely on their wits and courage to save one of their own. For Rapace, the multifaceted role demanded more of her than anything that had come before, and in a career that took off on the popularity of a homicidally vengeful rape survivor, that’s saying something.

Her new seven-way turn is the latest peak in a banner year that’s seen Rapace take on an espionage thriller with Unlocked, return to the Alien franchise in a key cameo, and fuse fantasy with reality in the upcoming Netflix crime drama Bright, the latest from Suicide Squad director David Ayer. Rapace spoke to us about her busy schedule, the rigid compartmentalization that made her newest role possible, and the difference between European and American fans.

Each one of the septuplets you play has her own individual look, but, as an actress, what can you do to differentiate the roles from one another?

First of all, I worked with [director] Tommy [Wirkola] for maybe one year as he was developing the script. When they sent it to me, it was called Seven Brothers, and they were working on changing it to sisters. But during this time, I found I could build layered characters by treating them all like they were the lead in the movie. It would have been easy enough to just say, ‘Okay, this is the good one, this is the slutty one, this is the shy one, this is the tomboy,’ almost like a Spice Girls approach. But I want the audience to believe in each one of them, so I sort of used my life. I’ve been all seven of them. When I was a teenager, I was rebellious and angry, like Thursday. I got really into competing when I was training in martial arts, I was so focused, that was more like Wednesday. One year, I was very introverted and quite shy and didn’t show many emotions, like Friday. I could translate different parts of my life into all of them. I created a ritual when I was going from one character to another, like, I had different playlists for each character.

What would you listen to?

Tuesday was lots of reggae, kind of earthy music. Saturday was more poppy and girly—Beyoncé, Rihanna, Dolly Parton. Thursday was rock and roll, punk music. Wednesday was hip-hop, and Friday was no music at all. I had to have complete quiet because she has a need for that silence. For Monday, I was doing Springsteen and country music. I had different perfumes for each one, too. I had to be alone in my room when I was transitioning between characters, no one could disturb me. I had to be on my own, take the wig off, shower, put on a new perfume, and went into the makeup room next door completely clean.

In the scenes where you’re playing multiple characters at once, what’s the shooting process like?

We used all methods we could possibly find. It was a mix of things; we had to find solutions on the day-of sometimes. We had six doubles, girls who would play the other characters in shots over the shoulder or wide shots. I would have to show them what I wanted to do as each one of the sisters, almost like directing the doubles. Sometimes it’d be just me, alone with green screens and tennis balls. In an earpiece, they’d play recordings of the dialogue with gaps left for the lines from the character I’m playing, so I’d have to fit the words into the same amount of time, every time. Sometimes it’d be two doubles with green screen. Nothing was harder than when two sisters would touch or hug, that could take, like, half a day. It was so complicated.

So much of acting comes through reacting. Not having another performance to play off of, must pose a real challenge.

Oh, absolutely, that’s everything I know! I only know how to react and live with others—that’s acting to me. I was terrified before I started, like, I didn’t even know if I could do this on my own. But I realized I knew so well what I wanted to do with each character, that I’d leave little windows in conversations between them for reacting. I had to time it carefully. It’s like I was playing scenes from above, almost a bird’s perspective. I had to be a step ahead of myself and completely present in the moment. Some days, I couldn’t speak to anyone. I’d go to my hotel, go to the gym, work all day, go back to the hotel, do it all again. For, like, five months of my life, I had no social life. I barely saw anyone.

You mentioned the script was rewritten to put a woman in the lead. Do you think the movie is changed in any way by making that change?

Women play more games, I think. Sisters are always up to something, there’s always something going on. They have plans for one another—jealousy, competition. Sisters are strong, in the best possible way, but they can be quite brutal when they turn against one another.

You’ve become a fixture at Comic-Con, appearing this past year for Bright. Do you enjoy the atmosphere of the convention?

I didn’t see much. This past year, I was just doing a bunch of interviews, and then I had to go right back to L.A. for another press day. I was in and out of rooms. But I did get to see a lot of my friends, people working on different shows and different movies. I love running into people like that, but it’s all so intense. I was promoting three movies at one time, and I didn’t know what city I was in, what day it was.

Does that get stressful?

I don’t really get stressed, but I do like to go into my bubble. When I’m filming, I don’t do any interviews. I kind of close the door and focus, that’s how I get my best moments. It’s almost like being in a cocoon.

When you’re around Europe, do people often recognize you as Lisbeth Salander?

No, not really. Maybe in the two years after the movies came out, but then not so much afterward. People don’t really recognize me so much. They’re more like, “Is that her?” I have dyed hair now, people who have just seen me in a movie don’t have the same picture. It’s always too late by the time they realize I’m actually me. I’m recognized more in North America, I think. People in Europe, especially in London and the U.K., are very polite. They might not even approach you if they do recognize you. But Americans are more direct. They’ll come right up, ask for a photo, and say “I love your movies!”

What Happened to Monday opens with narration about crises that bring about the apocalypse. Care to hazard a guess as to how the world might end?

We need to take more responsibility, environmentally. We’re going in a downward direction, and way too fast. We need to team up and work together if we’re going to save our world. I’m quite shocked at how many world leaders and positions of power aren’t doing anything to create change. The population is growing so fast. We did a lot of research before starting the movie, learned about a lot of African and Asian countries, and education is always where the change begins. A lot of people might make choices differently if they were able to go to school. But I’m hopeful. I believe that we can do better—and that we will do better.