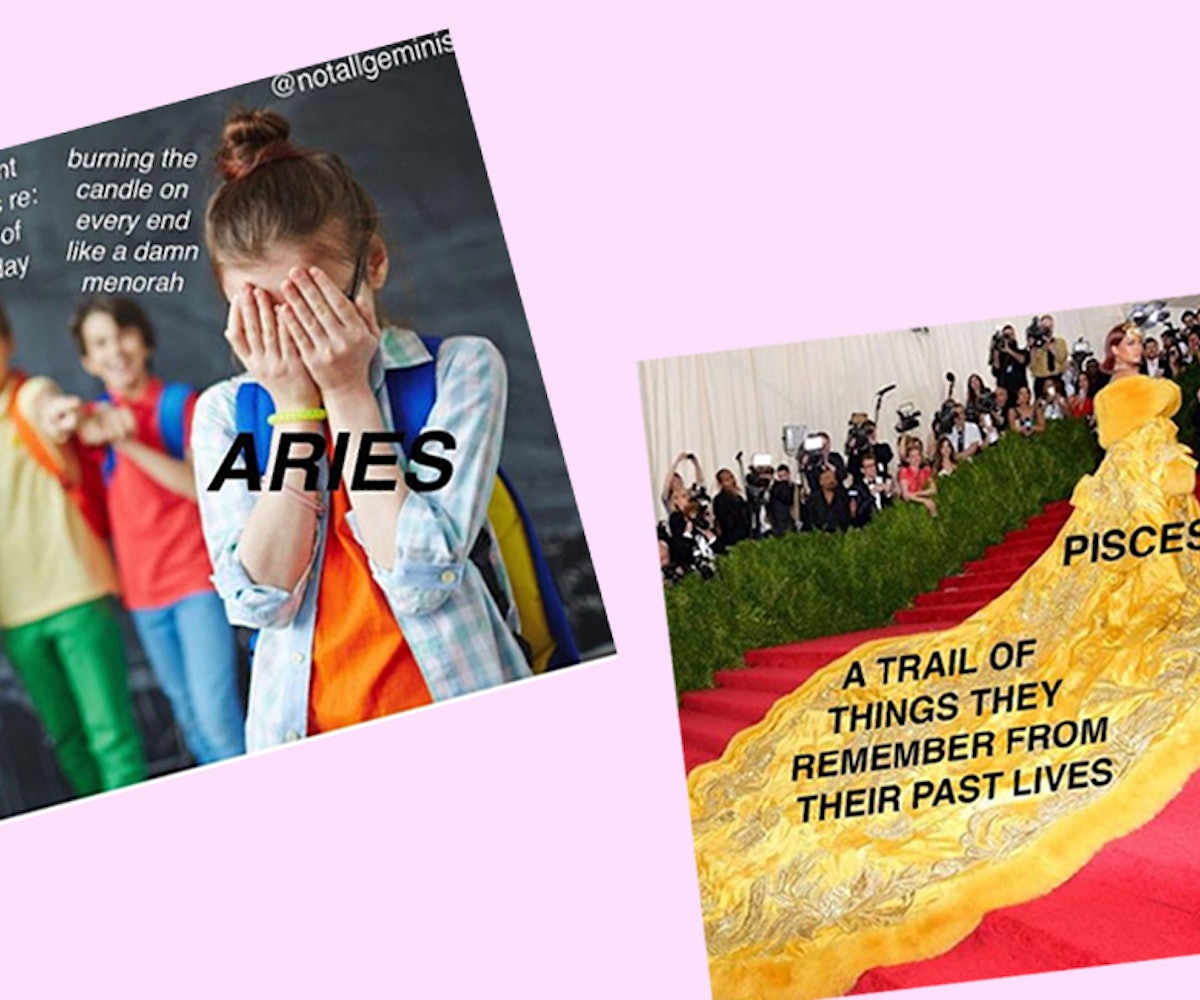 Following the @NotAllGeminis Instagram is always an unexpected trip. One minute, you’re filling out one of its “Never Have I Ever” quizzes on your personal Instagram stories, the next you’re laughing at a Venn diagram that skewers your love of gossip and fancy salads (wait, am I actually a Libra?). Regardless of your sign or what particular set you gravitate toward, it always ends up being the same: You’re going to spend at least a good hour back-scrolling through the entire account.

The social media pseudonym of L.A.-based screenwriter Courtney Perkins, @NotAllGeminis is one of the most popular astrology meme accounts out there right now, boasting over 116K followers at time of writing. Started as a fake Instagram four months ago as a way to pass the time, it wasn’t long until @NotAllGeminis went viral for its creator's undeniably incisive and pop cultural-relevant memes. Whether it be Queer Eye memes timed to the season premiere or a viral photo snatched from the depths of Tumblr, @NotAllGeminis is on it.

In honor of Gemini season coming to a close, we spoke to @NotAllGeminis about the secret to making a good meme, why only some people read the dissection of every single sign, and why “Not All Capricorns” also needs to be a thing. Read our Q&A, below.

How did you get into astrology?

I got into it super-young. Just reading books at Barnes and Noble and using my family's computer to play online games that were geared toward nine-year-olds who were really into birthdays. I got super into it and just kept reading a lot. I was this really avid reader as a kid, and then I got into these other books that were also along the lines of astrology, like The Secret Language of Birthdays and The Secret Language of Relationships. It's always just been something that I've loved. I love, like, any kind of personality test type thing.

Soon, it's in the works. Six weeks, pre-order. Pre-order the T-shirt. [laughs]

When did you notice the account start to pick up steam? Why did you think it resonated with so many people?

I started the account at the very end of February, but I feel like it really starting taking off in April. Honestly, the biggest change was like halfway through May. Just having a couple memes go viral really helped, and getting some followers who had way bigger followings than me because, before, it was mostly just me and my friends making fun of each other. Just because there are grounded behaviors that I like to make fun of. I always have friends text me and ask if [certain memes] are about them, and I'm like, "No, it's for you and everyone like you." [laughs]

Everyone does feel personally attacked by astrology memes. That’s pretty much the point.

Definitely! But it's just so funny because I have a really good memory for birthdays. So my method of convincing people that astrology is real has always been to just look at the people in their lives and say, "Oh, well, you know what. Both my dad and my sister are super-organized, and they're Virgos." I have these insane lists of people, like my kindergarten teacher and that girl I had in my freshman hall... Actually, maybe I shouldn't say that. [laughs]

Why do you think astrology has gotten so popular?

I think it's just so much fun to explore the ways that you are similar and dissimilar from the people around you. And I think that something that has been cool in the new wave of astrologers is that they’re not really prescribing to standard sun sign compatibility. Because I think that that's something that people used to really be frustrated with—that stereotype of you being like, "Oh, you can only date Leos" or whatever. But I think people are generally kind of [now looking at it] like, "No, these are just the cool ways in which we are different from each other."

I personally love learning the culture. It didn't start off that way, but it kind of has evolved into that. I think I get really passionate about it when I start explaining it to someone and I have to convince them. I get like a really wide variety of responses to the things that people connect with on my account. Some people are really into the mean roasts and stuff. Then other people will say like, "I'm so glad that I understand I'm actually a Cancer now. I've never related before, but now that you've fully explained in-depth. This one meme, I get it. "

It's funny how memes feel like our main form of communication now.

I know. It's just like a picture of like... Kevin from The Office can convey your true emotional state, and that's valid now. [laughs]

That said, there has been some criticism about astrology from some skeptics...

Yeah, but there's also the argument of like, "This is just people trying to offset blame and not take responsibility for their actions."

[laughs] I would say, first of all, I'd do that constantly.

But I think I see it both ways. I think astrology is not something to take too seriously. But also, I know that I personally love making those jokes, being like, "I cried so much today. Classic Pisces moon," and getting to excuse my behavior with the stars.

That said, I think people are generally kidding when they say that... I don't think that many people believe that they are not autonomous. That they are not in control of their actions. That they're at the total will of the stars. [laughs]

You choose such interesting current pop cultural references also. Like, how do you decide to make memes of Kevin from The Office?

It usually starts with the image and just seeing whatever feeling is on someone's face or being conveyed through a photo. Trying to see like, “What is this saying? Who's this person?” But then the other times, if I'm talking about a pop culture event, then it's whatever is relevant. [Asking], “How does this relate to astrology? What does this look like if you put it through that lens? How are these traits coming out in this event?” And, honestly, most of the time, the memes that I make are dependent on my mood that day [laughs]. So, if you're getting the signs as like... self-care tips, it's because I'm sad. If you're getting the sign that roasts, it's because I'm mad. My memes are pretty inconsistent across the board because I am an emotionally volatile person.

A lot of people are starting astrology meme hybrid accounts on Instagram. Why do you think they've gotten so popular?

I think because people can see not only themselves but their friends and family in [these memes]. Because astrology is not just for you. I mean it's the same as any meme account. Memes are designed to be relatable and connect to some universal feeling. But, I think, when you add the layer of astrology, it's like, “Okay, this is a feeling, but it's specific to people that you know.” And, you can decide whether or not you feel it's accurate. But it gives you more of [an ability] to be like, "Wow, is this applicable?" and I think that's part of why there's been a rise in astrology. I think what modern meme creators have been doing for astrology is grounding those universal traits—traits we've always talked about—in behaviors that you see every day. And in a way, that makes it way more digestible, because it's not as fun to say like, "Oh, like, I'm a Libra. I'm indecisive." It's more fun to, I don't know, see a goofy meme about how they can't pick their shoes or whatever.

That's funny because I never check anyone else's signs. I only check mine, and then I realized...

Oh wait, aren't you a Scorpio? Are you Scorpio, Gemini moon?

You're Gemini moon though, right?

[laughs] Wait, that's so funny because I have a theory about who does and doesn't. I've had this as like a meme idea that I've yet to make, but I have a theory that some signs come and read all of theirs and they enjoy the process of watching me release every meme in a series, because they still get to think about it. Even though everyone's favorite is their own sign, I think some people enjoy seeing their friends' signs, their rising sign, their moon sign, whatever. And then other people are just like, "Where the fuck is my sun sign?"

I mean, if I'm really bored, I'll go find the Scorpio one and then be like, "Okay, maybe this is kind of applicable."

Thank you for validating my egocentrism for a second. So, riffing on your name a little, other than Geminis, what other signs do you think are criminally misunderstood?

I could go on about how every sign is misunderstood in its own special, unique way, but I'm gonna say Gemini just because me. But also Capricorns and Scorpios, those are my two.

Capricorn is an interesting answer.

I think Capricorn is so misunderstood because Capricorn gets this rap for being so serious and such a workaholic when in reality you end up just being super-ambitious. A lot of the time, Capricorns are ambitious, but they're more about steady progress toward any goal—and their goal could be domestic, their goal could be romantic, it doesn't really matter. Also, they get called "cold" and "aloof" and "distant" a lot—and they can be—but I think their thing is more that they're intimidating out of an insecure pessimistic and calculating outlook [on life]. Being like, "No one here will like me,” not, "I don't like anyone." Although, they certainly can have their phases of, "I don't like anyone."