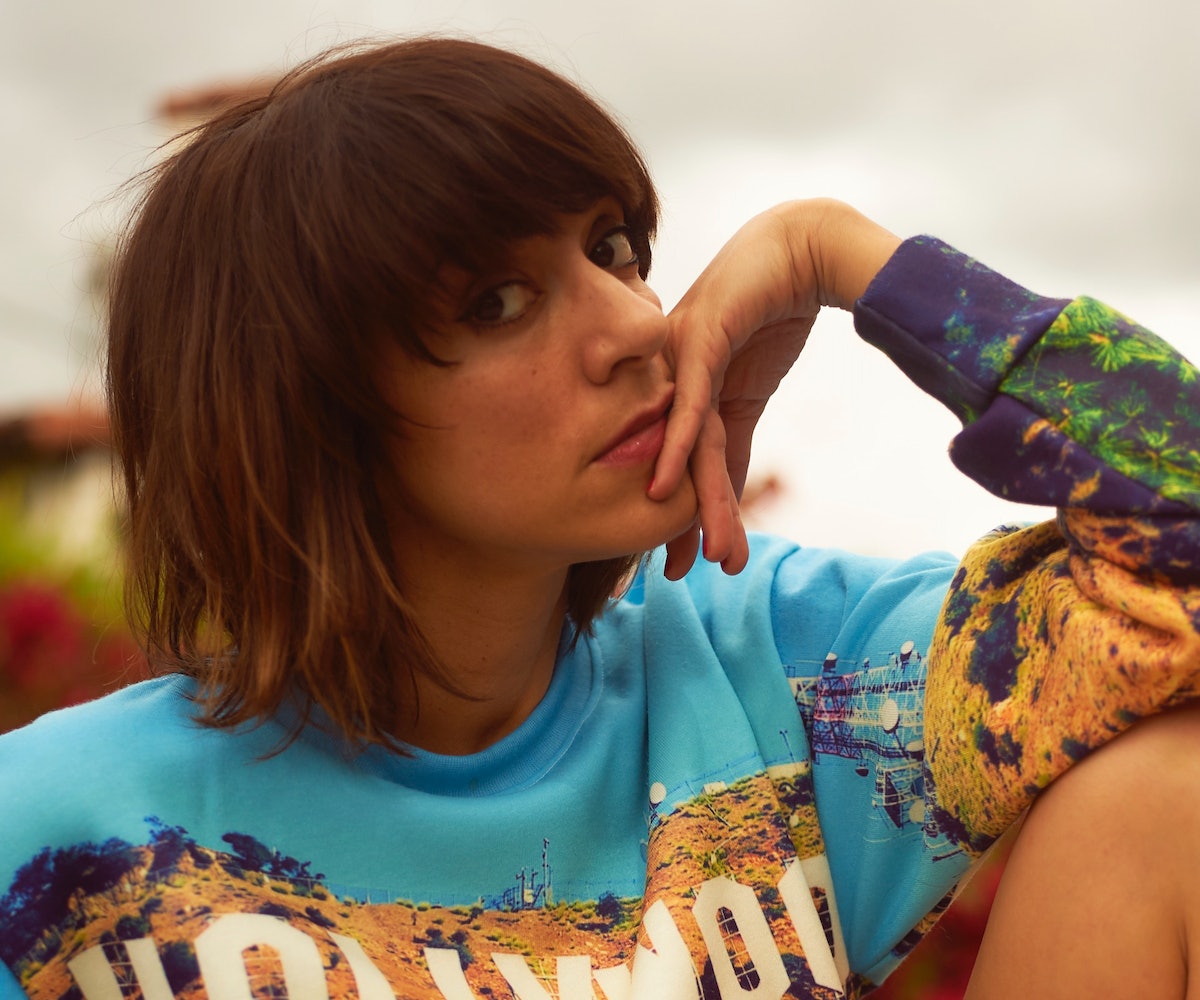 Photographed by David Joseph Perez.
by Fiona Duncan
May 17, 2017

“It’s rare to get to smoke inside of the house,” Ana Lily Amirpour says. “It might be the last time you get the chance to do that….” She invites me to light up on her sofa. It’s a flop couch, one upon which you watch movies, and the cigarette is hers—proffered from a double pack. Amirpour, who goes by Lily, is an Iranian-American filmmaker who grew up on horror flicks, like the ones she now makes herself, and skateboarding, which she calls “the best prep” for making them. For her, skate culture was about keeping up with a pack of boys, about falling—hard—and getting back up, and about viewing one’s surroundings creatively, turning cities into playgrounds. “That’s a fairy-tale thing,” she says, “which I feel like filmmaking is.”

These days, Amirpour rarely skates. She’s no longer “made of rubber.” But her shoes are—tiny Crocs encasing tiny feet, proportional to her slight frame. She sits spread-legged on the couch in her West Hollywood home, talking so abundantly and honestly—on sex, drugs, and techno—that her publicist later emails me to request some amendments to her profound candor.

Amirpour exists in the moment. She’s exuberantly here. “I’ve always felt like you have to do a good job at being alive every single day. You don’t get any guaranteed quantity of time. So, like, if a fucking asteroid comes, it has to be good. If it came now, I’d be like, ‘It’s cool,’” Amirpour says with a laugh, mimicking the sound of an incoming flaming space rock, punctuated by an explosion.

To Amirpour, things are often “so fucking” good, great, or cool—like Burning Man and this comic she’s reading called Private Eye. As she speaks, I can picture her talking shop in meetings with Vice Films, a studio with which she’s worked. Nearby, a Bruce Lee Supreme skateboard bedecks her home’s entrance. On a neighboring shelf sits a ball cap embroidered with an erect middle and pointer finger. It’s the hat British model-actress Suki Waterhouse wears in Amirpour’s latest film, The Bad Batch, which will hit theaters this June.

The Bad Batch marks Amirpour’s second feature film. Her first, 2014’s highly acclaimed A Girl Walks Home Alone at Night, immortalized a new vampire icon—a kohl-eyed young woman skateboarding in French stripes and a chador head covering. The Bad Batch is a cannibal story—Waterhouse’s supple right arm and leg are eaten in one of the very first scenes. Both films are centered on adult loners living in relative desolation who resist being preyed upon by their neighbors to stay alive.

“The Bad Batch all started from that one image,” Amirpour explains, “of a girl who had her arm and leg chopped off and was bleeding in the middle of the desert, in the middle of nowhere, but she was alive, and she was gonna fucking claw her way out and survive, because at the time that’s how I felt.”

The film was shot around Slab City, an off-the-grid community near the Salton Sea in California. It’s Amirpour’s “love letter to America—you know, dog-eat-dog, man-eat-man.” Her set is fantastic, shimmering with hints of places where she’s spent time, such as Miami, where she was a kid “catching lizards and climbing trees, with George Michael on the radio,” and Bakersfield, California, which was all “puberty, desert, farming, rednecks, and the mall.” (At age 13, Amirpour actually bought a mall poster of Keanu Reeves, one of The Bad Batch’s stars, and hung it on her wall.) The film also features a lot of Burning Man-type scenes: raves, drugs, freedom, and one giant neon boom box.

Amirpour actually spotted the boom box featured in The Bad Batch at Burning Man in 2012, back when she was first writing the script. “In this huge, vast, empty desert,” she recalls, setting the scene, “I would bike alongside it [while it was] playing music. It was surreal.” She was so enchanted that she finally decided to talk to the guys in charge of the iconic box. “I was like, ‘I’m gonna put this thing in a movie!’” she says, remembering with a laugh a time well before her work graced the big screen. “And they were just like, ‘Who is this girl?’”

Drinking: I have a Pavoni Italian espresso maker, the old-school kind. Every morning, I make myself a cappuccino or three with Lavazza espresso and fat-free milk—it makes the best foam.

Beautifying: La Prairie face cream. I also drink coconut water every day and I swear by my chewable fiber gummies by Phillips. Pooping is so important.

Listening: When I love a track, I can listen to it for weeks on repeat. Right now that track is “Style Is the Answer” by Mash. The lyrics are from a Bukowski poem.

Coveting: It would be pretty amazing to own a pair of the Nike Mag high-tops from Back to the Future 2. I think only 90 pairs were made.

Believing: Even though it’s a strange time and everyone is in a constant state of anxiety over our current government, I believe in America. I firmly believe that destruction paves the way for creation.

Watching: Train to Busan, probably my favorite film of the past five years, is an epic Korean action-survival movie, and yes, there are also zombies in it.