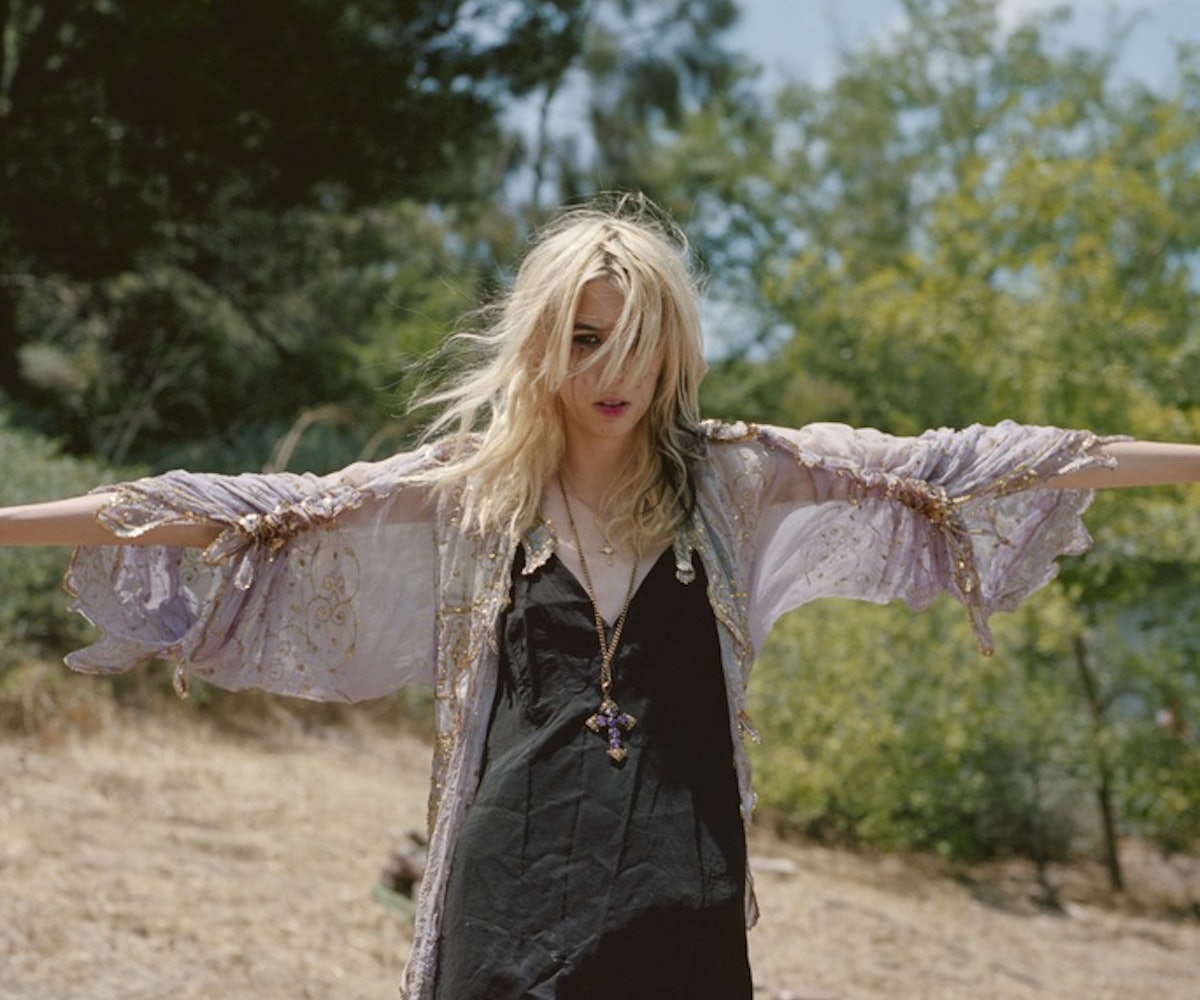 This past May, 18-year-old Arrow de Wilde graduated from L.A.’s Grand Arts High School—but it wasn’t easy getting there. Leading up to her final days as a high schooler, de Wilde’s band, Starcrawler, was getting busier and busier: playing shows alongside groups like Ho99o9 and The Lemon Twigs, being featured by publications like Dazed, and spending late nights in the studio with their producer, Ryan Adams. When the band was offered its first European tour this spring, de Wilde recalls, her school’s administrators finally stepped in. “It was a very big deal,” she says. “With public school in your senior year, you can only have, like, seven absences, and I already had, like, 20. I had to talk to so many people and fill out so much paperwork. Even though it’s an art school, they still have to follow the rules.” Her principal eventually signed off on the trip, which took de Wilde and bandmates Henri Cash, Austin Smith, and Tim Franco all over the United Kingdom. They returned home just in time for de Wilde to attend prom, where she wore a vintage tulle dress and a diamond-encrusted cross necklace, and—in true rock-star form—took her guitarist as her date.

Lounging in the plush back room of her record label’s L.A. office in a tattered vintage tank, skinny jeans, and the aforementioned cross, with her blonde-and-black hair askew, de Wilde effortlessly channels a ’90s Sunset Strip vibe. As she plays with the jewelry around her neck, she explains that her style is a random mix of inspirations. At the moment she’s into geishas, ’60s model Peggy Moffitt, and early Marilyn Manson, “before he became kind of a bro,” she says. “It’s weird because I’m into crosses and I’m into learning about occult stuff, but I don’t know if I’d want to wear an upside-down cross,” she adds with a laugh.

In many ways, de Wilde was destined to embody the spirit of rock ’n’ roll. She was literally raised on it. Her mom is famed photographer Autumn de Wilde, who’s probably best known for her portraits of The White Stripes, Elliott Smith, Beck, and Jenny Lewis. Her dad is drummer Aaron Sperske, who’s played with a wide assortment of acts, includingFather John Misty, Ariel Pink, Beachwood Sparks, and Lilys. Together they decided to name their first and only daughter after a favorite Harry Nilsson song, the 1971 classic “Me and My Arrow.” “It was also my dad’s nickname in high school,” de Wilde notes.

Though she grew up around her parents’ musician friends, de Wilde insists that she never really thought about pursuing music as a kid. She loved listening to it, though, and painting and drawing and taking pictures of her friends. In seventh grade, she decided to give singing a shot. “My friend and I performed at a talent show and we sang that song ‘A Teenager in Love,’” she recalls. “It was so bad. And I was so scared. I thought I was going to pass out. I was like, ‘I am never doing this ever again.’” But somewhere between that night and sophomore year of high school, something clicked.

Though she says she still gets nervous before hitting the stage, you’d never know it by watching her. With Starcrawler, de Wilde is at her absolute fiercest—running out into the crowd, writhing on the floor, and spewing fake blood from her mouth like the deranged lost child of Alice Cooper. The band’s sound—a scuzzy and rollicking mix of early punk and weirdo ’70s psych rock—is the product of all four of its members, though de Wilde and Cash write all the lyrics. “If I write songs completely on my own, I usually don’t want to show them to people,” she says. “I like to have another person with me doing it, so we can be like, ‘Yeah. No. That’s stupid. That’s cool.’ Otherwise I’ll just think everything I do is stupid.”

But conjuring her unhinged alter ego, she says, is pure instinct. So much so that the first time Starcrawler played live, de Wilde’s own bandmates didn’t even know what to expect. She came out onstage like a woman possessed, wearing a straitjacket—the look is still a staple of the band’s live shows. “For me, going to see a show, the music has to be good, obviously, but the band also has to look cool,” she explains. “You have to make people feel like they could never be that, or they wish they could be that, otherwise it just looks like the dude at the café down the street playing guitar. There almost has to be that thing where they feel not human—like God’s gift, or something. When a band shows that they care about every detail of everything—what they wear, what the stage setup looks like, the lights, and the music—it’s just so much more exciting.”

Eating: This kind of sucks because the restaurant is closed now, but it was the Chili Colorado Burrito from Barragan’s in Echo Park. Also, the tacos and curly fries from Jack in the Box.

Coveting: A cross made out of red diamonds

Believing: I don’t subscribe to a religion, but I’m not an atheist. I believe that everything happens for a reason. I believe in magic. And I believe there’s some sort of higher power, but I wouldn’t call it God.