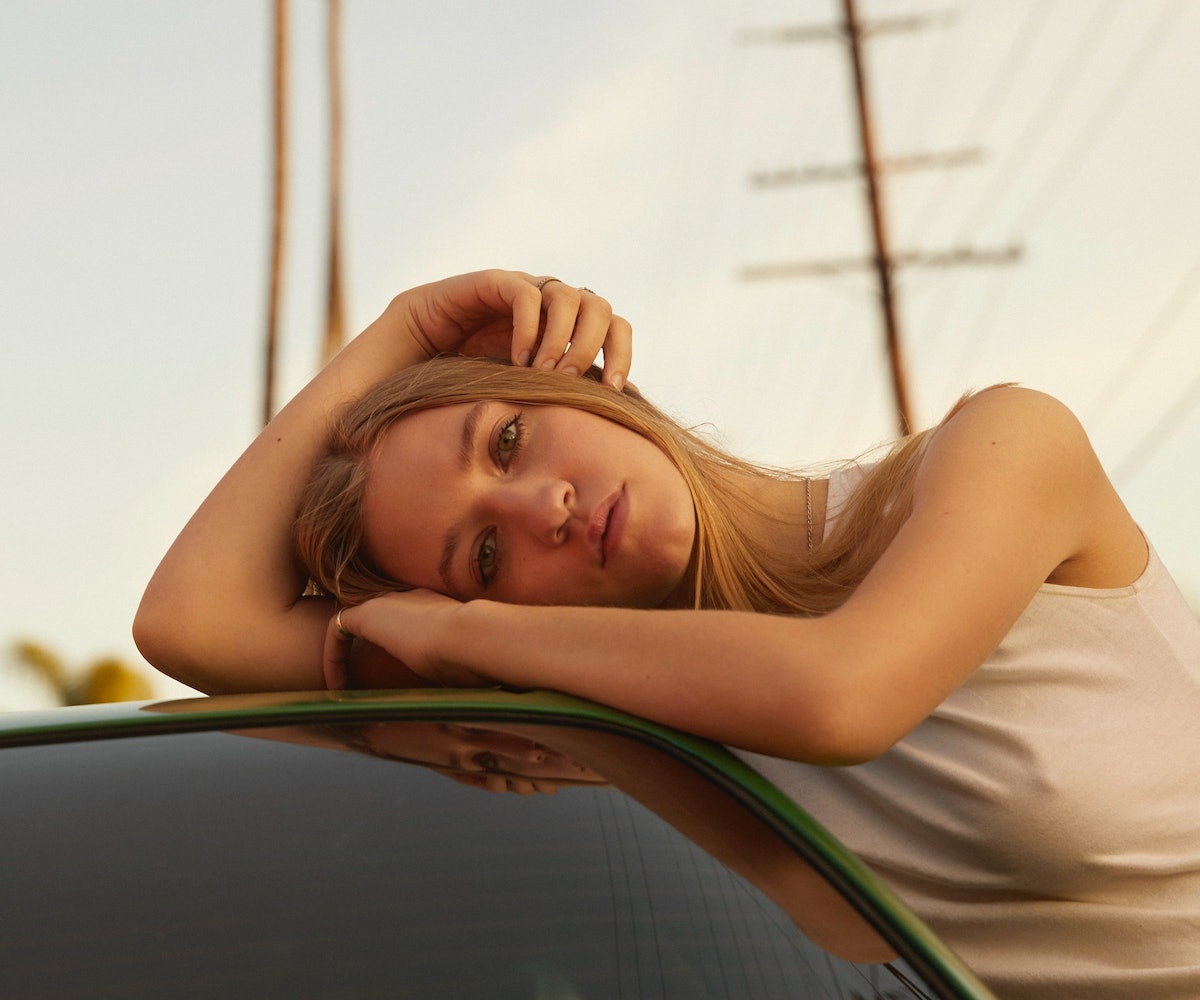 In 1994 President Bill Clinton gave his first State of the Union address, and O.J. Simpson took that infamous white Bronco on a car chase down the L.A. freeway. It was the year Kurt Cobain died, The Lion King was released, and, on July 1, one of the most iconic rock-star couples of the decade, Kim Gordon and Thurston Moore, gave birth to their daughter. So it only makes sense that Coco Gordon Moore would have a ’90s essence about her.

As she lopes into the Los Angeles café where we’re meeting wearing no makeup, a vintage Snoopy tee, black jeans, and boots, she doesn’t even notice that Kristen Stewart is posted up at a table nearby. She has the lanky frame of her dad, the low-register voice of her mom, and with her sleepily striking blue eyes framed by straight, middle-parted blonde hair, any confusion with Chloë Sevigny would be understandable.

Which is in part why Gordon Moore looks so at home as the face of the recent MadeMe collaboration with X-Girl—the cult-favorite ’90s alt-streetwear brand originally created by her mom alongside stylist Daisy von Furth. The collection, designed by MadeMe’s Erin Magee, seeks to reintroduce the beloved label and bring it back to its roots (when Sevigny herself was the brand’s ultimate poster girl). It also helps that Gordon Moore’s been into the line since high school. “I have so many X-Girl T-shirts. It’s kind of a problem,” she admits.

It wasn’t her first foray in front of the camera; she also famously posed with her mom for Marc Jacobs’s fall ’15 campaign. Modeling is far from her only talent, however. Though she fronted a punk band called Big Nils in high school—“None of us were good, our drummer was the only musician,” she explains—art is her real focus. She’s been drawing and painting since she was a little kid and graduated from the School of the Art Institute of Chicago last May. Her work has an intimate rawness to it: stark black lines, wide swaths of color, and messy layers, often with text incorporated.

There’s also an inherent sense of humor, like her bathroom series, which includes urgent renditions of multiple toilets and tubs. In her spare time she’s been writing, poetry mostly—citing her mom’s friend Elaine Kahn as a major inspiration—but other things, too. “I’ve written the first parts of my memoir, like, a million times. Since I was a kid I was like, ‘This is what’s happening,’” she says. “So I’ll definitely be writing one, but not until I’m much older, when I can have more perspective on life. I don’t really know anything yet. All I know is this is horrible, your twenties.”

It’s clear that there’s a lot more to Gordon Moore than the superficially cool façade projected onto her by both Gen Xers and post-millennials alike. She occupies that rare space between ordinariness and rock-star progeny that many claim to inhabit but few really do. She grew up spending a good chunk of her childhood on tour—she’s probably the only 22-year-old for whom going backstage at a Dinosaur Jr. show is nostalgic—but also in Northampton, Massachusetts. “You’re driving around, and you’re so bored and you hang out in fields and your friend’s garage, being bad or whatever,” she reminisces. What constitutes being bad in Western Mass? “Like, PBRs and smoking weed,” she says with a laugh.

She’s also a self-proclaimed introvert in an extrovert’s world (“If I’m at a party, I find the couch and I sit there,” she says), and a private person born to very public figures (she only recently made her Instagram widely visible, on which she reflects, “Ugh, regrets”).

It’s part of what made her anxieties skyrocket when her parents split in 2011. “It manifested in really strange ways. Like I couldn’t fly anymore, and I could barely go on the train to school, ’cause I didn’t deal with it and I repressed it, like I do with everything,” she says. “It was terrible. But it’s gotten better. I started actually dealing with those feelings.”

Part of that process has been reconnecting with her dad, whom she only started talking to again last year. And after living with her mom in L.A. for the past several months, weathering the confusing post-college period, she’ll be driving cross-country with him, to start the next chapter of her life in Brooklyn. (He’ll return to his current home in London.)

She plans on babysitting for money, looking for a part-time job at an animal shelter, and gathering some experiences to fuel her art. “So much of my work was about what I was going through in school, and now I need to live a little bit in the real world to make art about that,” she says. “I think it’s gonna be really good.”

Eating: The Apple Pan, this super-old-school L.A. burger joint. It’s a counter and these old guys that have been working there forever come and take your order.

Drinking:  Definitely coffee. I drink a lot of regular coffee with lots of cream, or a cappuccino if I’m feeling it.

Wearing: I wear this big navy blue & Other Stories turtleneck sweater like every day.

Beautifying: I’m obsessed with Kiehl’s. I use their Rice & Wheat Volumizing Shampoo. It smells so good.

Listening: Colour Green by Sibylle Baier. My mom plays it all the time and I love it, it’s so good.

Reading: I always read a bunch of books at once, because I get too invested in one and I start having dreams about it and I need to switch over. Right now I’m reading Jane: A Murder by Maggie Nelson and Jesus Saves by Darcey Steinke.

Visiting: I would love to go back to Italy. I remember going there when I was younger and I just loved it—how it felt, how the streets looked. And I love Italian food.

Coveting: Honestly, for Christmas I was like, “Can I just have gift certificates to Whole Foods?” So when I move to New York I don’t have to think about that.

Believing: It’s OK to be selfish for your work. Obviously there’s a line, but I think it’s OK to put yourself first when it comes to something you love, and you shouldn’t have to apologize for it.

Rejuvenating: Sitting on the couch or my bed and painting my nails while watching TV. It’s the most relaxing.