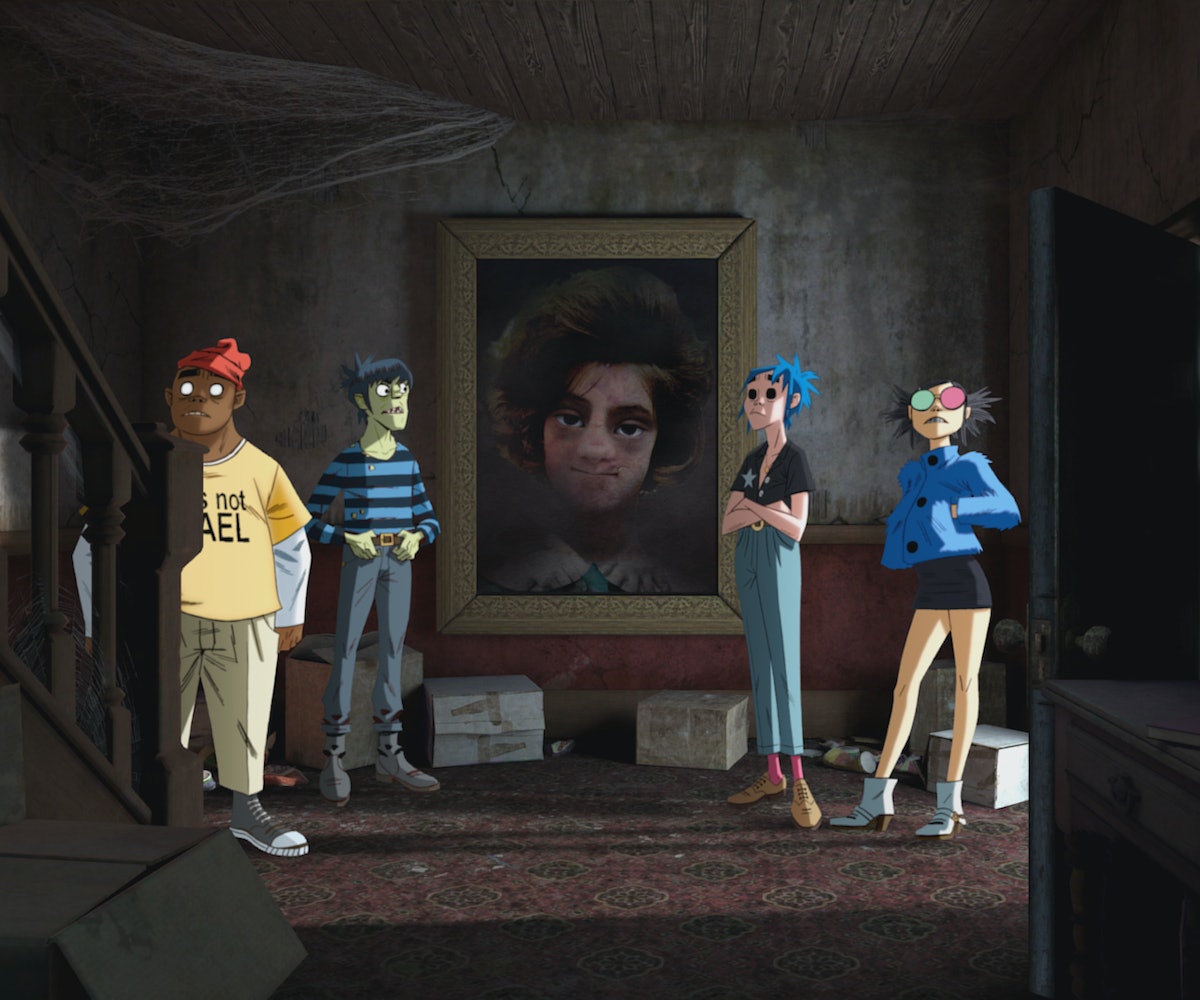 Between the release of their latest album, Humanz, and their summer tour, it's safe to say that our favorite animated band from the early aughts, Gorillaz, has been pretty busy. Here, we ask them about their dream collaborations and how success has changed them.

The Gorillaz live experience has been brilliantly inventive over the years. What are your plans for this tour?

Noodle: Once every 33 years, our planet races through the trail of a comet and the sky explodes with thousands upon thousands of meteors. I witnessed this on the summit of Mount Fuji, in the black of night, as I fought Maazu, a hell demon I had accidentally unleashed into the world. The sky burned like fire as our weapons clashed. And let me say, what I saw that night couldn’t even be the warm-up act to our live shows.

Bands, especially successful ones, have a habit of falling out, often acrimoniously. Did you?

Murdoc: Fucking hell, not this again. Look, if you’re talking about this rumor that I put a hit out on Noodle, then replaced her with a cyborg, and then the cyborg tried to kill me, yes, it’s totally true. But I’d hardly call that a falling out. A creative disagreement—all part of the process. We’re friends again now.

How has success changed you?

2D: Um, that’s a hard question. Can we have one with less words? Maybe you’d like to hear more about my flip-flops?

Russel: First up, success ain’t measured in sales. It’s measured in minds freed. And second, there ain’t nothing to reconcile, brother. We’re just doin’ our thing. People like it, we’ll keep doin’ it.

How does a new Gorillaz project start? Is it with the visuals or the music?

2D: Gorillaz is a group, so it starts with us. And not just the four of us. There’s Damon, Jamie, and all the collaborators, too. The driving force? To give you a metaphor: If Gorillaz was a tour bus, and all the musicians were on it, then the driver would be Alan. Alan who drives our tour bus.

How do the collaborations come together? Lots of management calls? Are lawyers involved? Or is it more organic than that?

Murdoc: Surveillance drone. Best investment I ever made. I’ve got so much dirt on people you wouldn’t believe. Makes them very cooperative. [Laughs] Nah, just yanking your wang. I got on the blower to my showbiz friends, pulled in a few favors. It helps when you’re as famous as I am, and you’re offering people the chance to be on the record of the millennium. You’re not gonna say no, are you? And if you do, you’ve made a very dangerous enemy.

Any singers you’d love to collaborate with but haven’t done so yet?

Murdoc: You know who I’d like to collaborate with? Me. If there was some way I could clone myself, I’d be fucking amazing to work with. I’ve actually got a bunch of eggheads working on it as we speak.

Could you talk us through some of your favorite experiences on this album with your collaborators—Grace Jones, Noel Gallagher, Benjamin Clementine?

Noodle: Grace is just the most inspiring person ever. She has this aura about her, like she’s not human exactly. She can’t be put in a box because she’s like this ancient and powerful force of nature, the mother seed from where we all sprung. And then we did handstands together in the studio. It was really fun.

2D: I really liked Noel. We’re like the Three Amigos, if one of them fell off his horse onto a sharp cactus and died. Leaving two of us behind to bring hope and justice and music to the Wild West.

Murdoc: Technically, I was unconscious when “Hallelujah Money” was released on the day of Trump’s inauguration. Had to get completely spuzzed off my nut to get through that shit show. But yeah, Benjamin was great.