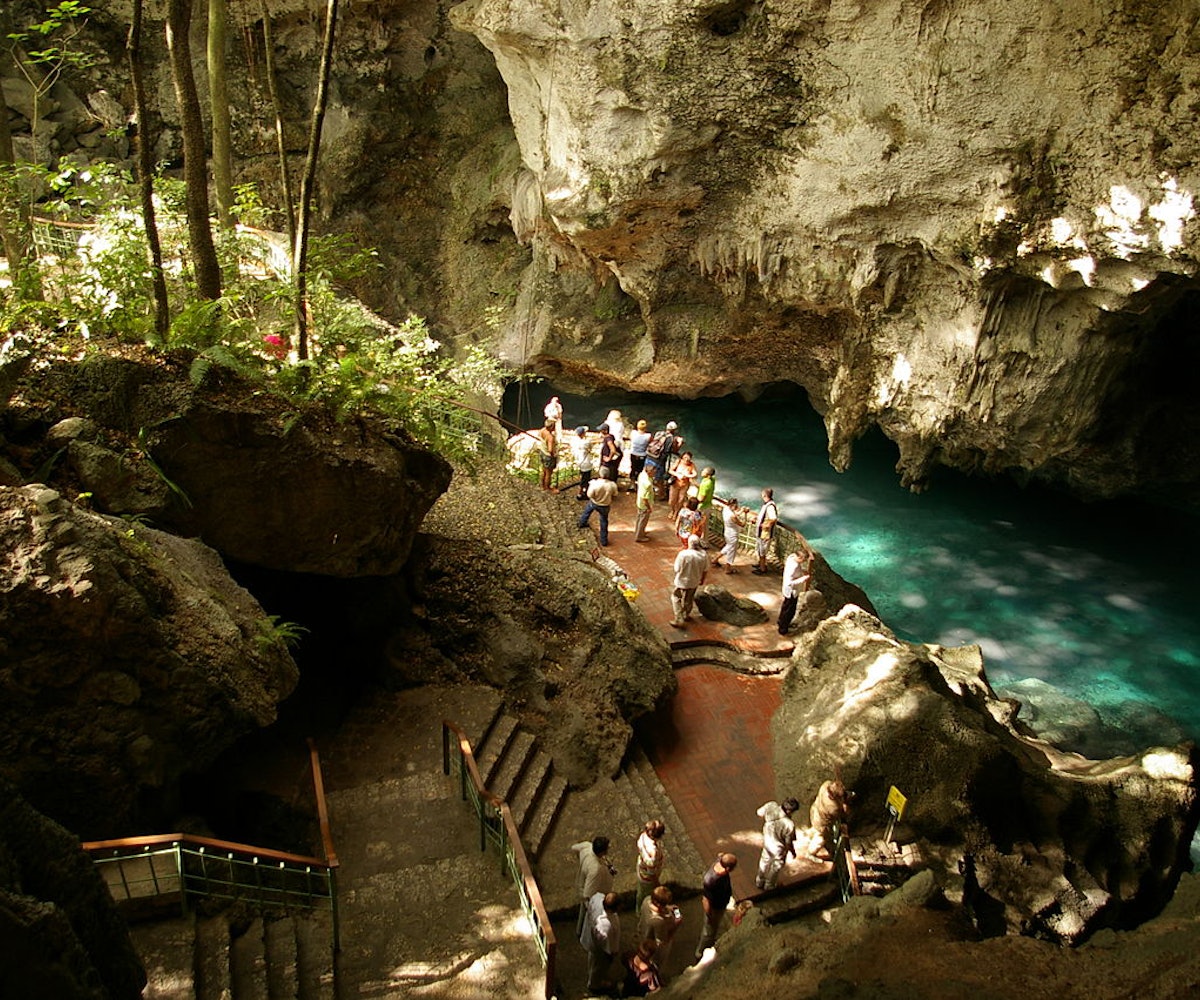 The man next to me on the airplane proudly announced to me he was on his seventh visit to Santo Domingo. His reason for returning time after time? Not family, friends, or even an elementary working knowledge of Spanish. “The vibe,” he told me. Simply the vibe.

Clearly, there’s something special about the Caribbean’s oldest settled city. Perhaps its secret is that it’s not just one special thing but many. From the eye-achingly turquoise waters that surround it to its dense history and ever-evolving nightlife, the phrase “something for everyone” comes to mind. And thanks to a dollar-friendly exchange rate, you’ll be able to check out a lot of somethings. Looking to embrace the island life? Here are a few ideas for your next Dominican adventure.

Hotel Billini: You know the old saying, location, location location? Yeah, Hotel Billini’s got that. Located in the Zona Colonia neighborhood, Billini is a stone’s throw away from the action, be it bars, history, or shopping. The lobby is a pleasing array of bright blocks of colors, while the rooms themselves are simplistic havens—all clean lines and muted shades, a tiny bit of Finland in the heart of the Dominican. Yeah, they’ve got spa amenities (a massage after the long flight, anyone?), a gym, and an airy dining room. But the real treat is for sun worshipers: a rooftop bar and pool with water so blue you’ll swear they stole it directly from turquoise water that surrounds the island.

Hire a local tour guide: What better way to get to know your new neighborhood than by foot? Outside of Santo Domingo Church, there’s usually a clutch of locals offering to give tours. Take them up on it! From there, you can learn the fascinating history of the oldest settlement in any of the Americas. There’s Calle las Damas, the first street built in the city, named because it gave women a place to walk and gossip. Visit the home of Juan Ponce de León (of Fountain of Youth fame), and see the super creepy swastika window frame in the Panteón Nacional, a gift from Hitler to former dictator Rafael Trujillo. The guides’ knowledge is extensive, and they work for tips—so be sure be sure to give generously. It’s well worth it. Oh, and if for some reason a man name Tomas ends up being your guide, please send him our regards.

Take yourself out to the ballgame: It’s no secret that baseball is a Big Deal in the DR. While you’re in Santo Domingo, check out where it all started by taking in a game at Estadio Quisqueya, home to Licey and Escogido, two of the country’s six professional teams. Peanuts and Cracker Jacks are optional, but if you’re thirsty be sure to grab Presidente beer, the ballpark’s near-ubiquitous sponsor. Good news for lightweights like me: The locally brewed pilsner has a low alcohol percentage, meaning the experience of being at the game will go to your head before the booze does.

Isle of Light Fest: The exact date of the fest changes yearly, but if you’re in Santo Domingo in March or April, consider checking out Isle of Light. With all due respect to Coachella fans, this is the way a warm-weather festival should be run, from the zip line, to the fresh snack bananas hung from trees (which have ruined me for all other fruit experiences), to the fact that there are a mere 3,000 fans enjoying the day with you. The one stage setup packs a punch—from upcoming Latin artists across every genre to international headliners, which have previously included Neon Indian, Shamir, and Crystal Castles.

Los Tres Ojos: Fancy a day trip? Grab a ride out of town to Los Tres Ojos. The national park features a series of interconnected caves. (You can thank since-then-dormant volcanic activity for that.) Stroll through the dramatic open-air rock formations and enjoy the shade of the dense vegetation on your own, or descend into the cave system with a guide. There, you can take a makeshift ferry ride across several deep blue subterranean lakes. Feeling daring and/or in need of some serious exfoliation? Dip a hand or foot in the water and allow some of the tiny resident fishes to take care of your dead skin.

El Cuarto Elástico: Like to dance? Enjoy music served up in ones and zeroes? The electronic music is a small but burgeoning segment of the Santo Domingo scene, led by the record label El Cuarto Elástico (“The Elastic Room”). While the collective doesn’t have a storefront (yet), their artists are known to throw carefully curated events across the city. Be sure to check their Facebook page for what’s happening next.

Meson De Bari: With its arched doorways and photos covering every wall, this restaurant feels like it could be a part of someone’s lavish home. (That feeling is only amplified by the fact that outside, there’s only a tiny sign announcing the restaurant's name, which meant it took multiple passes for us to find.) Their traditional Dominican dishes, from the spiced eggplant and rice to their specialty crab guisado, tastes like they've all been made from family recipes.

Lotos Restaurante Vegetariano: Fellow vegetarians, I have your back. If the meat-heavy versions of local cuisine don't quite do it for you, try Lotos Restaurante Vegetariano. The restaurant features twists on both Dominican and Taiwanese recipes, swapping out meat for faux versions of the stuff. Bonus: It’s all served buffet style, meaning if you’re famished, you will get your money’s worth.

Barra Payan: Barra Payan is open 24 hours a day, so consider this diner/fast food joint your go-to for after-hours eats. The menu is basic, sugary drinks and greasy sandwiches, and the atmosphere is relaxed—customers sit on stools and shout their orders to whoever might be listening. The simple and significant setup is a hit—they serve up to 2,000 sandwiches a day. The president is rumored to stop by for late-night bites when working overtime, and Anthony Bourdain counts himself a fan.

Mamey Librería Café: The Dominican Republic produces its own beans, which means coffee drinkers are in for a treat. To begin your caffeine explorations, head to Mamey Librería Café, which serves the kind of rich, smooth cold brew it would be a sin to taint with milk and sugar. While you’re there, lounge in their airy courtyard or check out the art in the attached gallery, which features offerings from an ever-changing group of local visual artists.

Caciba: With its multiple rooms for drinking, watching bands, all covered with a cave-like rock, Caciba gets 13/10 for atmosphere, with extra points being given for the soundtrack, which pings from classic 1980s New Wave singles to modern indie and back again. Grab a cocktail—which even locals will tell you are reasonably priced—and a couch, and settle in for a relaxing evening. (You might occasionally have to shout to be heard—but hey, that’s bar life.)

Camden: Camden is the kind of waterhole locals brag about. Which is understandable given its numerous concerts, comedy events, and Monday through Friday happy hours.  But it also doesn’t hurt that with its dark red wallpaper, dark wood furniture, and shelves of books, it looks like the kind of fancy parlor you’d want to spend a whole evening in, sipping spirits while discussing life, the universe, and everything in between. Settle in and order a Mama Juana or two. Just be careful—in a crowded bar shouting the name of this traditional Dominican rum cocktail can sound like you’re asking for a different, more illicit substance. (File under: learned the hard way.)

La Alpargatería: You could justify going shoe shopping with the amount of walking you’ll be doing in Santo Domingo. But seriously, do you really need an excuse? La Alpargatería’s line of brightly colored clogs, low-cut sneakers, and sandals perfectly captures the island’s breezy style. All handcrafted, all local materials, and (probably goes without saying) all awesome. Bonus: Their store in the city also features a cafeteria featuring freshly mixed salads and a full bar—so after you’ve spruced up your shoe collection, you can also grab a bite.

Diseño Local: Few designers capture the tropical spirit like Jose Duran. The heavy draping of the Dominican designer’s dresses, tunics, and pants show off the rawness of the fabric and create the perfect breezy yet sophisticated silhouettes that are likely to keep you cool on the hottest days. Diseño Local carries his designs, along with homeware, bags, and clothing from other like-minded artisans—because Santo Domingo is clearly not in want of artistic or artisanal talent.

NEXT UP
Culture
Scream 6 Trailer Brings The Nightmare To New York
Astrology
Get To Know Aquarius, The Certified Freak Of The Zodiac
Culture
6 Shows To Binge Once You've Finished 'The White Lotus'
Fashion
Jenna Ortega Is The Face Of Adidas’ Newest Line
Style + Culture, delivered straight to your inbox.