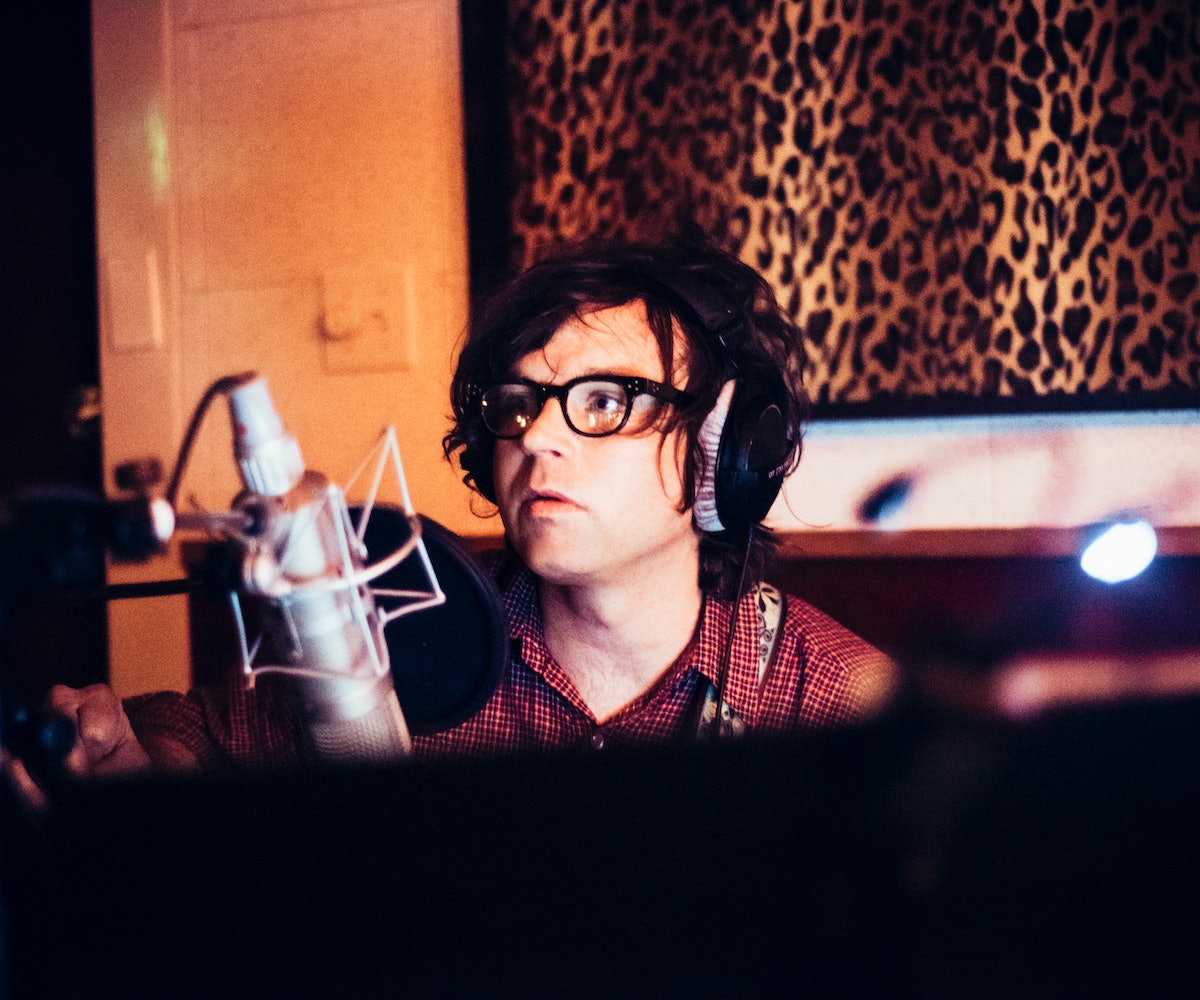 When Ryan Adams released Heartbreaker in 2000, I was a year out of journalism school and settling into my first serious job as the staff music writer for an alt-weekly in Detroit. From the first spin, I was sucked into the deflated urgency of his alt-country moans and wheezing harmonica, drawn to the fact that he was disconsolate over the end of a relationship with someone I’d happened to correspond with professionally.

It was an instant classic, familiar yet fresh, the kind of album that to this day has the ability to transport me to another time—namely, a drunken, crying, broke, standing-in-the-rain-without-an-umbrella kind of time. In the 17 years since his solo debut, Adams, now 42, has released several more studio albums, an excellent song-for-song reimagining of Taylor Swift’s 1989, two live albums, and a deluxe reissue of Heartbreaker, not to mention all of the recordings he’s overseen at his L.A.-based Pax-Am studio, including Liz Phair’s upcoming double album. Also in this time, he’s battled Ménière’s disease, a shattered wrist, clashes with critics, and drug-fueled lows.

Today, though, in a cozy room at New York’s famed Electric Lady Studios, where he’s just recorded acoustic versions of tracks off his latest album, Prisoner, Adams is fit and animated in jeans and a Hüsker Dü tee (which he will later pull a Slayer sweatshirt over). And despite the power-ballad energy of “Do You Still Love Me?” Prisoner’s first single, there are undeniable Heartbreaker-style vibes throughout.

One might draw a line between this and his relatively recent divorce from Mandy Moore, but the songwriter (perhaps expectedly) downplays this connection. So instead we dig into nostalgia, prophecy, and what the BulletBoys have been up to lately.

Heartbreaker got the box-set treatment last May. Why did it feel like the right time for an extended version?

Well, it was probably time before then, but a lot of different stuff was going on that prevented it from making sense. The original version was more or less recorded on four-track in Jacksonville [North Carolina], at the house of my best friend growing up, Allen Midgett, who had recently passed away. A lot of material was coming from his house, and I didn’t have time to process it. I still haven’t, really. So I asked one of my managers to help. I knew I would be more critical of stuff that other people may find charming, and I felt at the time like I couldn’t revisit it. It would have been, like, detrimental to me as a human, and it would have taken two years. I have a couple [copies of the box set] at my house, but I’ve never opened them. But people who love that stuff apparently really like the way that it was done, so I’m happy with it.

I was going back and forth between Heartbreaker and this new record and it seems like there are some echoes.

No one else has said that, but I agree.

Every relationship is different, but I think they were both written around the end of relationships, right?

I think technically the self-titled record is at the zenith of that, but there’s some continuity of me really finding my sound. Making Ashes & Fire [prior to the self-titled record] with Glyn [Johns] was the best possible thing I could have done, because I worked with this master engineer and producer who restricted me in this kind of unbelievable way. He thought I should just sing and play acoustic guitar and not come up with overdub ideas. It wasn’t to be mean. He just wanted to create the soundscape. It’s how he works, and he’s gotten great albums because of it. But what I learned from that session, as my studio was being built next door, was that I never wanted to have that experience again.

There are some hair-metal elements to “Do You Still Love Me?” and maybe some subtle Skid Row vibes on “Breakdown.” Were you feeling nostalgic for that era?

I have this thing where I listen to the records during the time when hair bands were realizing they were fucked. And I love the comeback records—there’s usually one for almost every major band. Ratt’s Infestation is hugely great. “Best of Me” is so Van Halen-ed out, but so righteous. And there are a couple of Cinderella records that are really interesting, like on Heartbreak Station when they use mandolins—right after Long Cold Winter, that was a bold fucking move. I use YouTube footage to find out things like “What are the BulletBoys up to?” or “What happened with Britny Fox?” But musically, I hadn’t thought about “Breakdown” having that essence before. I always kind of saw it as a combination of what I love about some grunge stuff, like Dirt-era Alice in Chains, maybe mixed with Oasis’ Morning Glory singles-era Britpop, and the bridge kind of reminds me of [The Cure’s] Disintegration or Wish. My lady friend and I had just gone to see the Disintegration tour, so that was fresh in my zone. It’s weird that when it comes out, it’s legit Skid Row.

Maybe I was projecting….

For sure. Because people were saying, “Oh, it’s a hair metal record,” and he’s into AC/DC. The way the press moves these days, as we know from our new president, this topical information is like the tail of the scorpion. It strikes you long before you know if the venom is taking or not. When I said that in an interview, it was so casual. They were like, “What have you been listening to?” And I said, “I listened to AC/DC’s Fly on the Wall a lot on this record.” So the headline became “power metal,” but I hear more, like, Foreigner, classic rock, those major dissonant chords. But I’m a product of a whole different scene. That’s probably where the confusion is. I want to do metal arrangements on sad songs.

Obviously you’re a huge music fan. But you almost seem to feed off of it, whether you’re listening to the Smiths or Pentagram, or discovering the hidden, haunted power of a Taylor Swift pop song.

There’s this choice as a musician, and as a human being, that you can make, and it’s the choice to not be jaded. I’m going to be who I am. And part of that is saying, “OK, I own a Jandek record.” I own, like, five Jandek records. And we could talk about “Message to the Clerk.” But I don’t need to reference that to be cool. In fact, doing anything to be cool or to not be cool is just a really troublesome thing to me. I naturally like a lot of different kinds of music, and I don’t see Taylor’s tunes any differently than I see other people’s. I do recognize that she’s this huge star. I mean, she plays to, like, 60,000 people, and that’s a huge thing.

How did the covers album come about?

Over Christmas, I had tried to do the 1989 thing on four-track, but it fucking ate the tape. I had plans to jam in the studio anyway, and I didn’t really want to write my own songs. I was halfway to three-fourths into demo-ing and figuring out what this new record was, and that week, like most weeks at my studio, was about freedom and whoever wants to stop by. So we just kind of did it. And when all of the think pieces and mansplaining stuff happened, I found it really—well, have you ever had those moments when you feel like an alien looking at the way humans are about a thing that seems like a non-issue and you go, “Wow, this is how people who don’t know each other communicate about something that doesn’t really affect them.”

Yes, I have had those moments.

So when that happened, that’s how I felt. I was like, “Wow, I’m just a dude. I picked up an acoustic guitar and I figured out the bones of these tunes and just sort of laid them down, and now there are like fucking think pieces on it,” but it didn’t personally affect me in any way because I’d already had my fun.

Speaking of massive stardom, you’ve said that selling 200,000 albums was an honest living, and that’s probably what most people want, but we live in an all-or-nothing culture, especially in creative fields.

When recording technology and television came out, it probably really pissed off bands, because they were like, “We were making a killing doing this live and traveling around, and now somebody can put this thing on this other fucking thing in their house.” It’s a pattern of humanity. But eventually, if the way that it’s being delivered devalues the work enough, artists will just stop—or something will happen. It has to get close enough for people to go, “Oh, just because this now happens on my phone doesn’t mean it should be free.” I don’t have a streaming service on my phone because I don’t know how it works. I would never browse music like that. I browse record stores, but I think for pop fans music was always anecdotal. I don’t know if big pop records are the ones that stick with a generation into their adulthood, though. When R.E.M.’s Green came out, everybody I knew had a copy. The jocks, the preppy people, and the alternative kids at my high school—it was this big unifier where everybody went, “Holy shit, what is this?” But I’m seeing pinball and retro arcades and teenagers and college students on the subway or in a café reading a book, not on their phone. It shifts. Someone told me recently that vinyl sales are outselling digital downloads.

It does seem like nostalgia for tangible objects is increasing. Well, it’s nice to have something you can hold and that can grow old with you. Like if your dad gave you a record or a guitar. I just can’t foresee a future when an aging father passes down to his son a fucking download code and is like, “I just wanted to pass off this thumb drive.” Although that’s very Star Wars in a way. But the real question is, will Skid Row get back together? How great would that be?