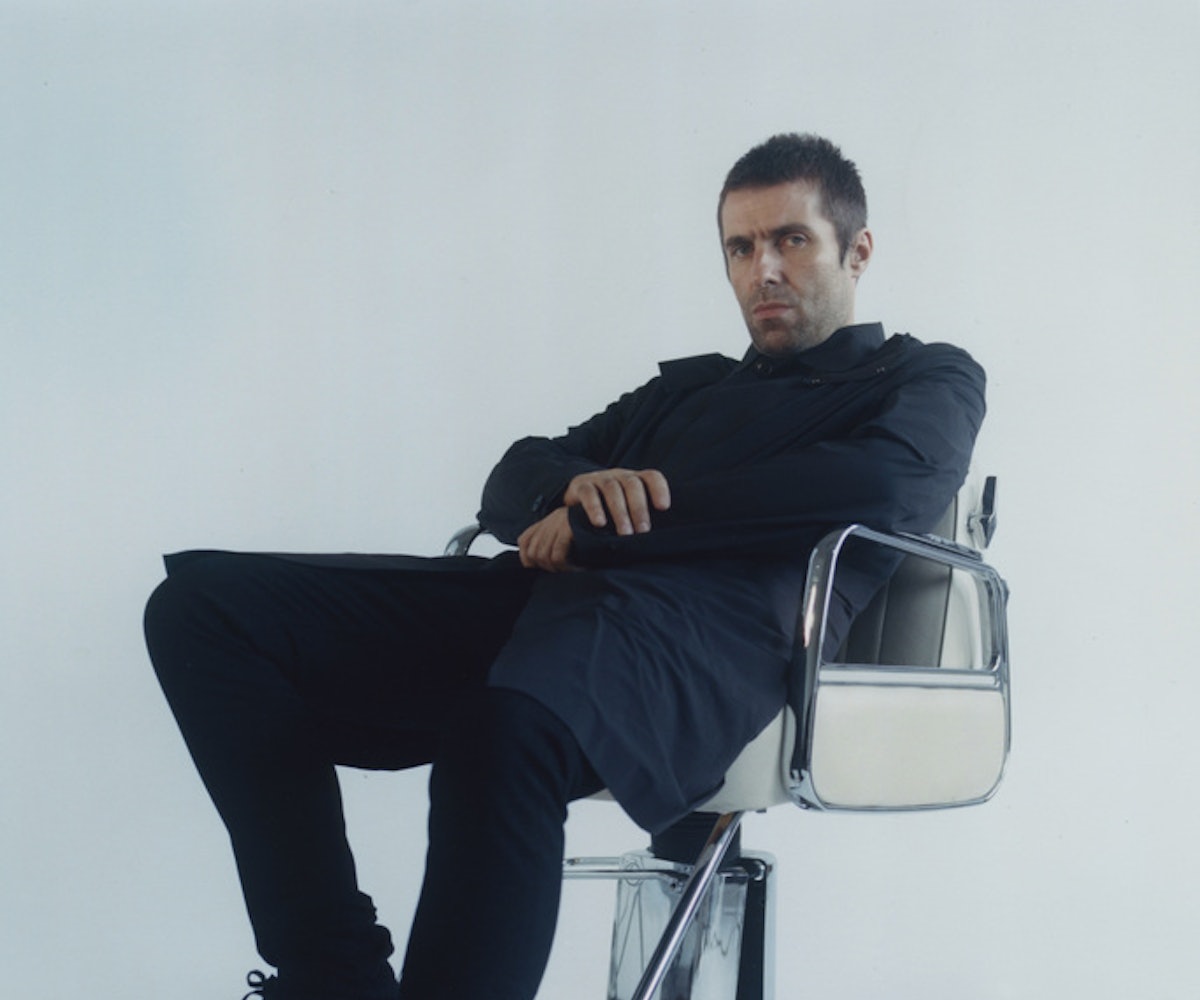 There is more than one misconception when it comes to Liam Gallagher’s persona. The former frontman of Oasis and, later, Beady Eye owned his role with maximum swagger—not to mention tremendous vocal prowess—but has constantly been blamed for disputes with his older brother and ex-Oasis bandmate Noel. The fact is, Gallagher’s affable nature is not prone to confrontation (unless provoked). He is honest and straightforward, and will talk to anyone, having gone so far as to open his home to autograph-seeking fans. Contrary to what the media may suggest, Gallagher doesn’t hold grudges—as soon as an apology is offered, his acceptance is smooth and gracious. He takes responsibility for the mistakes he has made in his personal life, which have been tabloid fodder for the duration of his 20-plus-year career.

Such attention has kept Gallagher out of the music sphere for some time (although his high-end clothing line, Pretty Green, has flourished), but he marks his return next month with As You Were, to be released on Warner Bros. Records. The solo album nods to the unapologetic, guitar-based rock ’n’ roll of Oasis and, more importantly, delivers Gallagher’s immortal voice. With songs like the brash “Wall of Glass,” the deceptively simple “Bold,” the serenading “I’ve All I Need,” and the Lennon-esque “For What It’s Worth,” the record is much like a worn but still stylish jacket. On a short break between never-ending gigs, Gallagher tells us what led him to As You Were.

There is little in the current musical landscape that walks a straight line of guitar rock ’n’ roll, which makes for great timing for As You Were.

I don’t know what a lot of bands are doing these days, but they’re not rock ’n’ roll bands and they’re not guitar bands. They’ve got one foot in the dance world and one foot in the guitar world. They need to make their minds up. Rock ’n’ roll guitar music is not trendy at the moment, but it has always been good to me. I’m not doing anything different than I’ve done before. I’ve had time off and it’s made people realize that sometimes you miss what you don’t have. It’s nice to get singing again without all the drama. I don’t mind drama, but to only have full-on drama, that’s no good to anyone.

This is the first time you worked with people other than your old bandmates.What was it that clicked between you and your collaborators on As You Were?

I wrote “Bold” and “When I’m in Need” and got signed [to Warner Bros. Records] off those two. The record company asked if I had any more songs and I said, “No, I don’t know if I’m ready for a record yet,” and they suggested working with writers, which I agreed to as long as it wasn’t stupid. I met Greg Kurstin and Andrew Wyatt for the first time in L.A., had a cup of tea and a chat about where we were going. I showed them the style I was doing, they got it right away, and we started. I’d be telling lies if I [said I wasn’t] a bit nervous, but within half an hour, it was like I’d known them for years. It was easy—no egos, we just got on with it. We made “Wall of Glass” in a day, “Paper Crown” in a day, “Come Back to Me” in a day. I went back to England and wrote more and it wasn’t a struggle to do this solo thing. As soon as I sang, it felt normal.

Why are you so wary of the term “solo career”?

I prefer to be in a band, but if I were going to join up with others it would just get compared to Oasis. It’s my name above the door, but it’s still very much a band thing. It’s not like it’s my way or no way. I’m open to what the guitarist thinks or the drummer’s point of view.

It’s telling of your agreeable persona that the other members of Oasis followed you—and not your brother—the moment the band split.

I’ve always gotten on with everyone. I can be a bit of a nightmare sometimes, but can’t we all? In the workplace, I’m chill. That’s one of the things that’s good with this album. With Oasis or Beady Eye or Noel, everyone wants to be the producer. Nothing worse than all these wannabe producers telling the producer how it is. I’m just singing, letting the musicians play and letting the producer get on with doing their thing.

You’ve been performing Oasis songs in your sets, which you didn’t do during your Beady Eye tenure. What brought about this decision?

I’ve seen some artists who don’t play their hits and they have the audience scratching their heads. Playing a new album to people is hard work. Oasis songs are as much mine as they are Noel’s. I’m using six of them to fill out a 17-song set. The way I see it, people are working hard, paying money to see a gig. I don’t want to be standing onstage singing my bollocks off with all new songs and having people going, “I’m not sure about this one.” You drop one old song and the gig goes off. You might as well give them what they want.

How has the response been to your gigs?

There’s a lot of love out there. There are more people wanting it to be a success than wanting it to fail. There is pressure, especially from the British tabloids, but it’s pressure I can handle. I’d rather have people scrutinizing me and checking out the music than people not giving a fuck.

Of your many good qualities, your consistency is the most palpable.