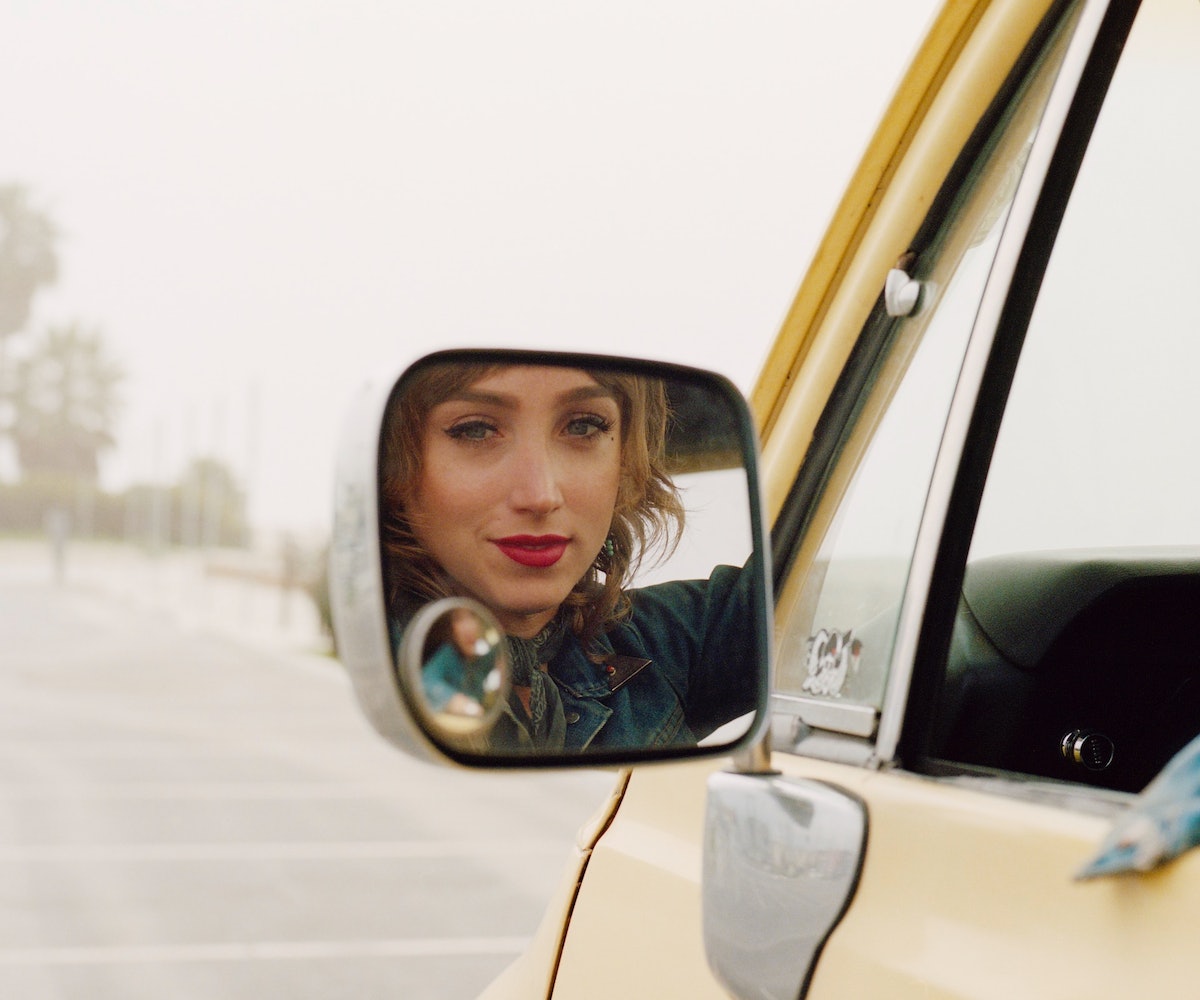 “It’s like having a bachelorette pad on wheels,” Margeaux Hamrock says with a laugh as we cruise toward her Long Beach digs, just a few miles up the coast from her hometown of Huntington Beach. Bob Dylan croons through the speakers while Mustard, her Chihuahua-terrier mix, sits perched on my lap, scanning the scene. It’s easy to see what Hamrock means. The 28-year-old makeup artist, hairstylist, and salon owner’s bright yellow ’74 Dodge Tradesman—a sort of Scooby-Doo-meets-Kill Bill hybrid—is every free spirit’s dream. With a sage stick and patchouli-rose spray tucked into the cup holders, a surfboard tossed in the back over vintage blankets, and a “Kill ’Em All” sticker overseeing the whole operation from the dashboard, the ride’s retro-mystical sensibilities are rivaled only by its girl-power vibes.

“As an artist, whatever you touch is a reflection of you,” she offers, maneuvering the vehicle’s massive steering wheel. “I very much feel like the van is a part of me, and I’m a part of it.” With Hamrock’s nickname “Geaux” emblazoned on the auto’s side, it’s clear that relationship is real. The lightning bolt punctuating the moniker is also pretty telling: “I love that my salon anchors me to Long Beach,” she says, “but whenever I have the chance to split, I get the hell out of Dodge.”

Have you always been into vintage cars?I’ve pretty much only driven old cars. My first was a ’63 Ford Falcon Futura that I bought when I was 15. Next was a ’64 [Ford] Ranchero, and then a ’73 Dodge van.

So this is your second vintage van?That’s right. Both my parents are surfers, so we had vans growing up. [Vans] are a lifestyle when you’re always road tripping and camping. At some point I realized a van was essential to my life, because I still love to cruise and be in nature.

How did you find this van?The original owner lives in Long Beach, so I would always see it around and dream of buying it. I never did, but a friend did, who traded it to another friend. Once he landed it, I told him to hit me up if he ever decided to sell, and he did [in 2014]!

So you basically manifested it! I see you have a tarot card tucked into your sun visor—the Three of Swords.I always keep a deck in the van so that when I’m at the beach or wherever, I can do a reading. But I had a leak in here recently, and my deck got so moldy I had to burn it. I wanted to keep one card as a memory, and I decided whichever I picked [blindly] was meant to be the one. Three of Swords was it. It guides me when I cruise.

We head down Redondo Boulevard, palm trees framing the corridor on either side. Just as the Pacific Coast Highway appears, sunlight breaks through the beach fog, and a salty breeze wafts through the open windows.

Dudes dominate vanner culture—does it mean something to you to be a badass vanner chick?[Laughs] Dudes love it when a girl shows up in a van, but honestly, I think anyone who lives the life of cruisin’ is going to love having a van. I have a lot of chick friends who love the van life and being on the road. It comes so naturally to me—even during a brutal summer when I don’t have air conditioning, I still love everything about it.

Are there other things you like about the van that people might consider flaws?Everybody thinks I’m crazy because my car breaks down a ton, but whenever I drive new cars, I just don’t feel the nitty-gritty of the road. I love the smell of exhaust; I love that my only A.C. is a little flap by my feet that opens to the outside. When it’s hot, I’ll drive with that flap wide open, and tiny hot pebbles from the pavement hit my shins—those kinds of things are what I love.

What makes this van special?It’s special for so many reasons, but being a “survivor” makes it desirable to a lot of people. In van culture, “survivor” is the term used for vans that are still in their original state, untouched. Mine has its original wood paneling, the carpet’s original, the paint, the bubble windows—pretty much everything.

Where’s your favorite spot to drive?Aimlessly going and not knowing what’s ahead of me is the best. I’ll drive to Joshua Tree on a whim, or head up to Ventura to surf. One time I ended up in the Ojai Valley. It was so lush and green—and my phone was dead, which I love. I pulled over to pick oranges off some farm trees, which I probably shouldn’t have been doing. I felt so free.

As we turn right onto Ocean Boulevard, the Pacific fans out in front of us, and the Queen Mary sits off in the distant harbor, shimmering under the sun.

At your salon, you’re essentially creating personas for your clients. When you got your van, did you tap into that same artistic impulse to create its persona as well?Oh yeah, it’s just like my own hair, actually: I change it up all the time. Sometimes I’ll have tons of blankets in the back and lots of things on the walls; other times I want it really minimal. It all depends on how I’m feeling.

Speaking of personas, if your van were a person, who would it be?Large Marge! Because she’s totally fucking crazy—remember [in Pee-wee’s Big Adventure] when she’s driving the truck and her eyes pop out of her head? That’s my van. I’ve had the power steering go out when I was doing 60; the gas stopped working while I was on the freeway once. This van can be terrifying and unpredictable—Large Marge, all the way.

But the two of you get along pretty well.For sure. We just fit. I’ve always wished I could have lived in the era of early ’70s beach and surf culture, so I love driving a car from that time period. With all the surfing and camping my family did growing up, it’s just embedded in me. I’m constantly trying to re-create that world.