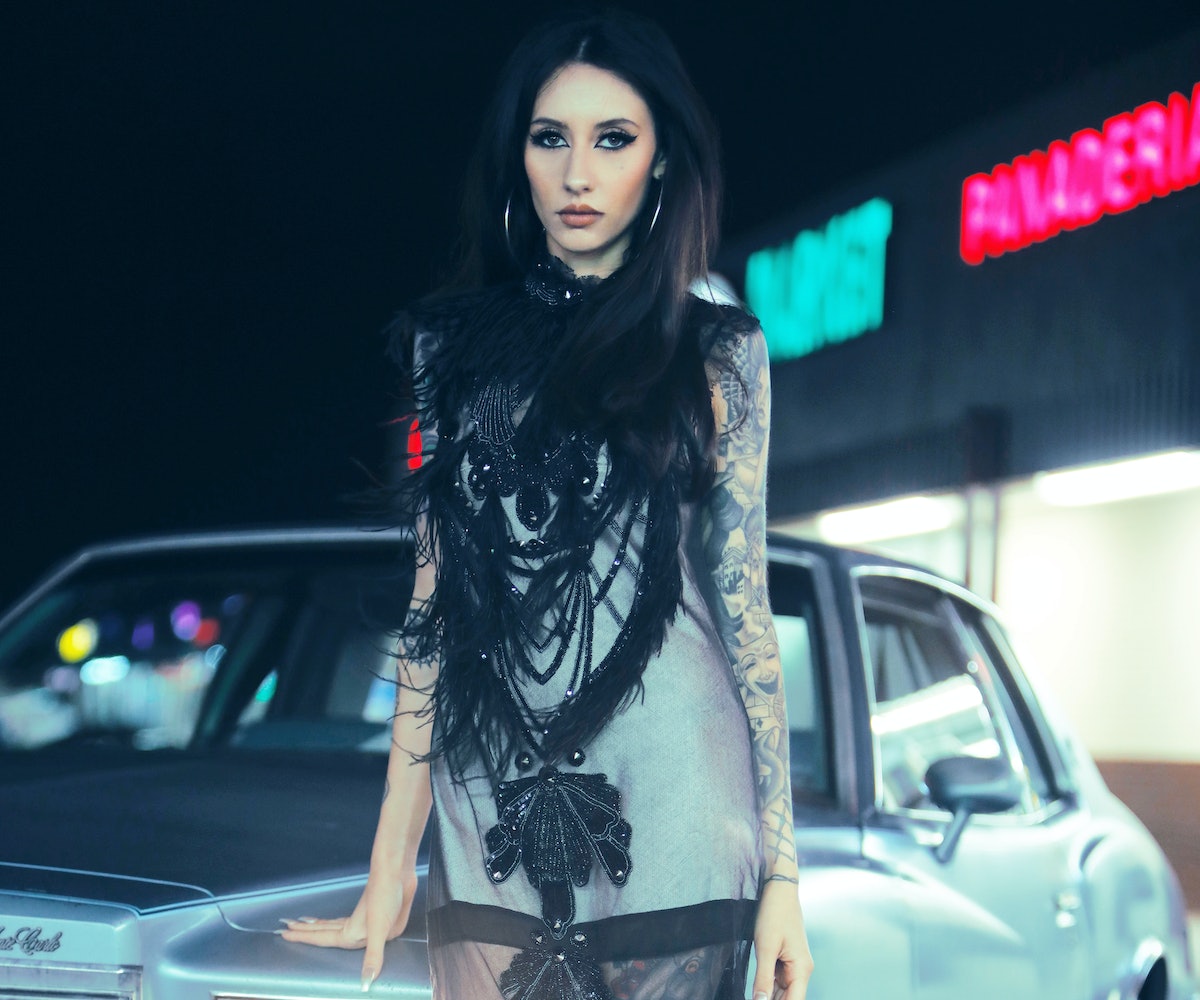 “I honestly think it was fate,” Natasha Lillipore says, circling the streets of Industry—an (ironically) sleepy Los Angeles suburb lined with mom-and-pop Mexican restaurants and ranch-style houses—in the ’79 Chevrolet Monte Carlo that she knows was destined to be hers. Lillipore’s romantic sensibility, the kind that fuels a faith in the universe, might seem unexpected from such a self-made creative powerhouse. At just 25 years old, the illustrator has honed a coveted aesthetic and built an enviable list of clients that includes the likes of Topshop, Nordstrom, Nyx Cosmetics, Rihanna, and Puma (the latter of which recently flew her to Dubai for a “mural battle”).

But as the Colorado native swiftly ducks into a Starbucks parking lot to avoid a freeway ramp—“Oops, definitely don’t want to go that way,” she says with a laugh, gracefully maneuvering the chain-link steering wheel with her talon-nailed fingers—it becomes clear that the fast lane is not what this girl’s about, literally or figuratively.

With black-and-white photo-booth shots from the Orange County Fair resting in her car’s ashtray, a pearl-adorned satin rose from her mom tucked into the corner of the dashboard, and a tufted vintage pillow propped up on the serape-upholstered seating, “the Monte,” as she’s affectionately dubbed it, is less a speed demon than it is a portal into the artist’s connection to her Chicana roots, and—after all the jet-setting and life-domination—a reflection of her deep desire to chill the fuck out.

“This car makes everyday things feel more fun. Just driving around my neighborhood, getting food, hanging out with [my boyfriend] Javier—it all takes on a new vibe when I do it in the Monte,” she muses. “These days, people have to do so much to be entertained, but for me, I just love to drive.”

Have you had an interest in vintage cars for a while?I have. For a long time I wanted to go to school and learn upholstery so that I could reupholster old cars. There’s a nostalgia element for me because I grew up around friends and family who drove lowriders and muscle cars—most of them really fancy. I’ll want something like that eventually, but for now I just want [a vintage car] that’s comfortable, that I can drive without freaking out about getting it scratched or dented.

So you feel at ease driving this car?Absolutely. But I try not to take it on the highway because she struggles going over 60 miles per hour.

Does that bother you?You know, I love it because I get to go slow and explore my neighborhood. There’s such a fast pace in L.A.; when I’m driving my other car, I feel so much pressure to keep up. In the Monte, I can relax and take my time. If people want to go around me, I just let them go.

What was the experience like the first time you drove it?Honestly, I was terrified! I’ve only been driving for about a year. I was a super-late bloomer getting a license because of an accident I was in as a kid that left me with a lot of anxiety around driving. I warmed up to it quickly though—I’d only been driving two weeks when we bought this. It’s amazing how much freer I feel now—I was spending a lot of time at home before [laughs]. And in the Monte, I know I’m safe. I mean, it’s a boat!

How did you find this car?Javier surprised me with it, actually. He told me our friend was selling it, and since I’ve always wanted a Monte Carlo, I told him he should get it—and he did! It’s both of ours; we work on it together.

Why the draw toward the Monte Carlo specifically?There’s something about them I’ve always loved: their lines, for one, and the shape. Cars from the ’70s in general are more than cool; they’re also a little gritty, a little sleazy. I love that. But so much of it is the nostalgia—remembering all the people in my family who had a Monte Carlo when I was growing up. It feels like home.

Rolling green hills bob in and out of our view while cool air streams in from the open windows—the engine emitting a gentle purr along the wide, quiet streets of suburban L.A.

How has the Monte Carlo’s history in lowrider culture played into your love for this car?What I love about lowrider culture is that it’s not about having that candy paint job and 100 percent customization; it’s about loving your car, taking care of it, and consistently working on it with your family. Obviously there are those dudes who love their lowriders more than anything, but the car often brings the family together in Chicano families, and I think that part of lowrider culture gets overlooked a lot. I wasn’t close with my dad, so I didn’t have that opportunity to work on cars the way other kids do, but working on this car with Javier has given me a chance to reclaim that story for myself.

If your car were a person, who would it be?Cheech from Cheech and Chong [laughs]. It’s a little smoky, kind of dirty, and rusty here and there, but it has character, and it’s really fun.

Cheech is so goofy though! There’s also a badass aspect to this car, no?The cars themselves can be intimidating, which I think is actually a reflection of the bigger picture, the reputation Chicanos often have for being tough. But there’s also so much beauty in them. Whereas some people may look at [the Monte Carlo] from the outside and immediately associate it with violence, I look at these cars as an art form that shows a softer side, the beauty and resilience of Chicano people. Especially when you see a girl driving one and bringing femininity to it, I think it makes people question their assumptions about lowrider cars.

We’ve meandered into Avocado Heights, a tiny neighborhood lined with wide, manicured lawns and lush fruit trees. A man on horseback, shaded beneath a wide-brim straw hat, smiles and greets us as we cruise past.

How else does that femininity show up in your Monte Carlo?There’s a lot of romance in Chicano culture, and that goes for the cars, too. Back in the day [Chicanos] would cruise on Whittier Boulevard in East L.A., and you’d always see couples driving together. That’s really special for me because that romance is part of the relationship Javier and I have with the Monte. We’ll take it to get dinner, listen to oldies, just spend time together. I love that the culture of the Monte Carlo incorporates that romance and beauty.

Where’s your favorite spot to drive?It’s not glamorous, but I love to drive through Hacienda Heights. It’s similar to where we are now—lots of big properties and people riding horses. The area is super beautiful and relaxed; it feels like you’re outside the city even though you’re still in L.A. Where I grew up, there was so much nature. I spent a lot of time in mountains and creeks. It’s harder to find that here, so to keep my sanity, I go to places that feel removed.

As an illustrator, you’re constantly creating your own world. Is there an element of that same impulse for you with this car?Absolutely. I fully believe that if you don’t like the world you live in, just create your own. That’s why my car is full of things from home—the trinkets, the serape—all of that is because I want to be reminded of what I love and what’s important in my life. The world is kind of a scary place right now. If you can surround yourself with things that help you feel safe and get through the day without screaming at someone, you’re on the right track.