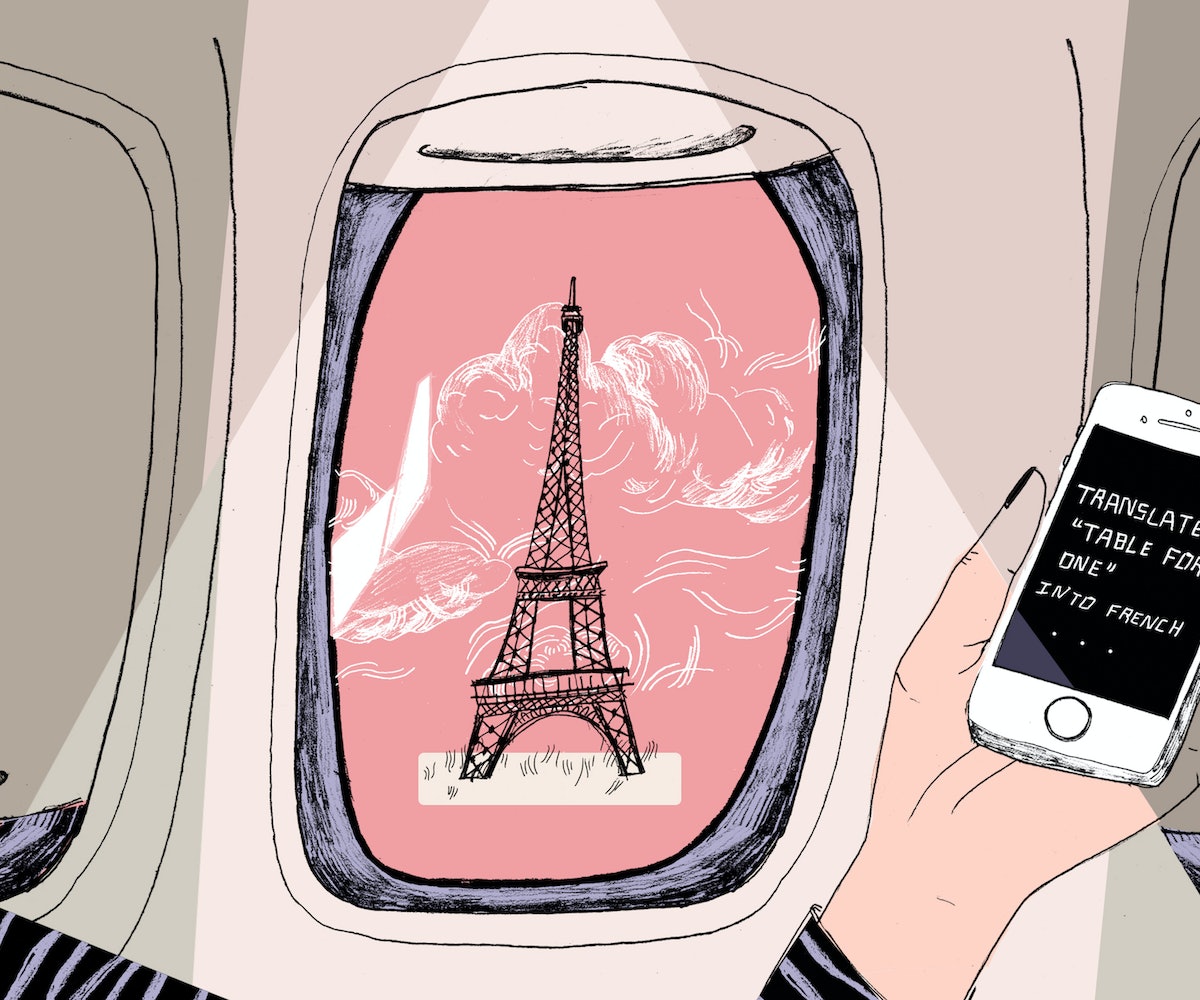 I’d never really stayed in a five-star hotel unless someone else was paying. Or, I guess that’s not entirely true: Once, in Los Angeles, I splurged on two nights in a beachside lodging, the kind of place with an easily translatable Spanish name that is the very definition of “casual luxury.” I chose to rest my head at that particular spot because I’d heard that they had the most comfortable beds in, I don’t know, the world, and at that time in my life, I needed to feel like I was never far from being held—preferably tightly. The beds lived up to their reputation, and the room service burger wasn’t bad either. Was it worth the cost? I don’t know; I put it on a credit card that I’m still paying off.

Anyway, last fall I took a trip to Paris and the Normandy resort town of Deauville, where I had the full five-star hotel experience throughout. And while I wasn’t technically paying for my stays, I was there for work—so, you know, I was absolutely paying for them.

I’d never been to Paris alone, and I guess maybe I still haven’t, because I was traveling with three other journalists. But in all the ways that matter (like, would I have time to sit in a bath for over an hour straight? And would I be able to read at least two full books during my five days away? Yes and yes), I was alone.

During my time in Paris and Deauville, I stayed at Hôtel Barrière Le Fouquet’s Paris, Le Royal Monceau, and the Royal Barrière in Deauville, all Leading Hotels of the World. What does it mean to be the crème de la crème of hotels in a city where already every single thing around is clearly among the best of the best; where arresting moments of beauty abound to a degree that it is impossible to walk down the streets without pausing over and over again to take in your surroundings, which shimmer in the kind of green-gold-gray light that seems to come only before the most sublime and devastating of storms? Well, what it means is that, at one of the hotels, an employee will discreetly share what it is exactly that sets them apart: “Vous savez, when Keem and Kanye stayed here, they came in through a private entrance.”

How, though, did that translate for me and for my visit? I had no private entrance while I stayed in these hotels, but I did feel like I had a private escape, one in which I could submerge myself in the deepest of tubs set in a bathroom completely lined in mirrors, so that I could, over and over again, shatter my own face into infinite pieces, all with a gentle tilt of my chin. What I realized is that sometimes the relief of escape feels like nothing so much as a familiar welcome, an embrace in the arms of a person you didn’t know you’d been waiting for. In other words: Is this what it feels like to be born? That is an actual thing I wondered after descending into the dimly lighted Shiseido spa at Le Fouquet’s, where I was fed chocolates and olives (a very good combination, by the way) and soon found myself under the capable hands of a masseuse, whose touch was never more than I could handle, even if I wasn’t quite sure why I was fortunate enough to be the object of its attention, why I was lucky enough to be in this suspended state of paradise.

Luck, of course, is a funny, made-up thing. The question of “Do I deserve this?” snaked its way into my head more than once, but it was always quickly followed by the reassuring thought that I definitely didn’t deserve it, that nobody deserves anything. There’s what we have and what we don’t, and so why not have everything we can?

And yet: It’s an undeniably singular experience to exist for a while in a place where maybe you don’t actually belong. This could mean a five-star Parisian hotel when your monthly salary is probably what most other guests forget having spent at a particularly nice dinner at Chez l’Ami Louis one night. Or, it could just mean being alone in a foreign country in general, and the disorientation that goes along with that, an overall dichotomous sensation of feeling very secure in your own body (after all, it’s the only thing around you that’s familiar in a way other than because you’ve seen it on film before), which contrasts sharply with the fact that same body is currently going through a massive disconnect with your mind, because your anxiety is spiraling out of control, and the only place you feel calm and centered is sunk down in the depths of a bubbled-over bath, book in front of your face, glass of sparkling water or Champagne (preferably both) at hand.

Here is the truth: While I was in France, I was blue. I was not the deep-dark, soft, comforting, smothering blue of depression or infatuation; I was the electrified powder blue of shocked and sizzled nerve endings, of eyes always open wide because they’re afraid to shut for even a moment. I felt scared, like self-sabotage was lying in wait, lurking around every corner. These feelings were not helped by being abroad right before the 2016 presidential election; these feelings were not helped by seeing a Hillary 2016 tote bag on the shoulder of a Frenchman walking up Avenue George V and panicking because anything that seemed so certain could be due for an upset; these feelings were not helped by the persistent sense that the sky was going to open up, but rather than make everything clean again, it would wash away what was good and green and gold, exposing a limitless expanse of gray instead.

These feelings resulted in me sleeping through my alarm every morning, and not because I was suffering from jet lag, but because, rather than sleep at night, I would stay up in my room and draw a bath and sink myself in, reading a novel until the bottom edges of its pages grew wavy and soft as my grip grew slack and the book dipped into the water, at which point I’d make my way into a pillowy soft, milk-white bathrobe and find myself between my pillowy soft, milk-white covers, book still in hand.

I took with me Jade Sharma’s Problems and Alexandra Kleeman’s You Too Can Have a Body Like Mine. Both were the perfect books to have along; both, coincidentally (in a not really coincidental way), were blue books, in that their covers were blue, but also in that they grapple with very blue-ish material: the alternate mortification and sanctification of the female body, and breakups.

I was not going through a breakup when I was in France, but I was (and am) in a relationship, and there is something inherently tragic and potentially disastrous about going to Paris alone when you have somebody with whom you could, theoretically, go. So while this trip to France might not have resulted in or coexisted with a breakup, it was still a break, one that felt too clean and therefore suspicious. Like, how does one person in a relationship just fly to France and eat a 30-euro plate of chicken fingers in a luxury hotel and go horseback riding down the silver-blue sands of the expansive Normandy coast while the other... doesn’t?

I didn’t know, and maybe I still don’t, but one way in which I tried to stay connected was by sending pictures. One of the sun angled just so behind the graceful stone curve of Diana’s neck as she bends down to touch the expectantly raised head of her hunting dog in front of the Louvre; one a lush and dew-doused rose blossom outside Deauville’s Villa Strassburger; one a reflection of me in the bathroom mirror of the Imperial Suite at the Ritz Paris, a gold flash of the swan-shaped faucet just barely in the frame. This helped, I think.

It feels funny somehow that taking those photos helped, because if you’d asked me before leaving for France what I like least about going anywhere these days, it probably would have centered on the impulse that people have to make their travels look perfect and active and purposeful. So even though I was on a trip with a very literal purpose, I wanted to treat it with the utmost decadence, which, to me, meant not using social media for anything resembling the travel porn that’s so ubiquitous on all my feeds. Because, after all, I was trying to capture a real sense of a very surreal experience (namely, luxury-hoteling my way through France), and what social media seems to do is take the most mundane aspects of reality (food, clothes, shelter) and lend them an aura of surreality because of the intensity with which they’re fetishized. So why add to the absurdity of my life by putting yet another layer of pretense on it? All of which is to say, I saved my fetishization of France for my boyfriend’s eyes alone, and it seemed to work out quite well in the end.

And so, the end: I was never really quite sure how I would write about going to France. There’s a way to do it that’s a cataloguing of sorts—list the best places to eat (L’As du Fallafel, Miznon, Breizh Café), shop (Merci, Cuisse de Grenouille, the rare books section of Shakespeare and Company), and stay (Fouquet’s, the Royal Monceau, and the Royal Barrière, naturally). There’s another way to do it that isn’t quite so obvious, but that still serves as an advertisement, a fervent, pseudo-gossipy recounting of, like, an adventure that has a vaguely hypnotizing appeal to it, sure, but that never quite registers as real, so rounded are its edges and shiny its surfaces.

And then there’s this, which reads like an apology of sorts, if only I ever apologized for anything. It’s not, at all, an apology—though there’s maybe some regret attached. I don’t think any vacation worth a damn is without its regrets; I never want to leave a place without thinking about all the things I want to do when I come back. It’s why I’ve only ever gone to the Louvre 45 minutes before closing time, so I could rest easy in the knowledge that I’d seen the lounging bodies of Ingres’s The Turkish Bath and Bernini’s Sleeping Hermaphroditus, but also stay restless about all that was left to explore. I want to stay wanting things.

That then, was what this trip was for me: a reminder of what it is to keep desire alive, even when it seems like everything is laid out in front of you, there for the taking. By all means, take what’s offered—unless, that is, the strings attached are meant to bind you too tightly to something unacceptable. A vacation is a retreat after all, a refuge from your normal world; you might as well fill it with the very best this alternate reality has to offer—the best food, the best drinks, the best baths. Sooner or later, you’ll be back in your own life, figuring out how it’s changed since you’ve been gone, figuring out how you’ve changed. It will be hard, but if you planned your trip right, at least you’ll always have the memory of those baths.

NEXT UP
Culture
The Madonna Biopic Is Being Scrapped
Entertainment
Samia On 'Honey' & Saying The Ugly Part Out Loud
Culture
6 Shows To Binge Once You've Finished 'The White Lotus'
Entertainment
Gracie Abrams & Gia Coppola On The Joy Of Free-Flowing Collaboration
Style + Culture, delivered straight to your inbox.