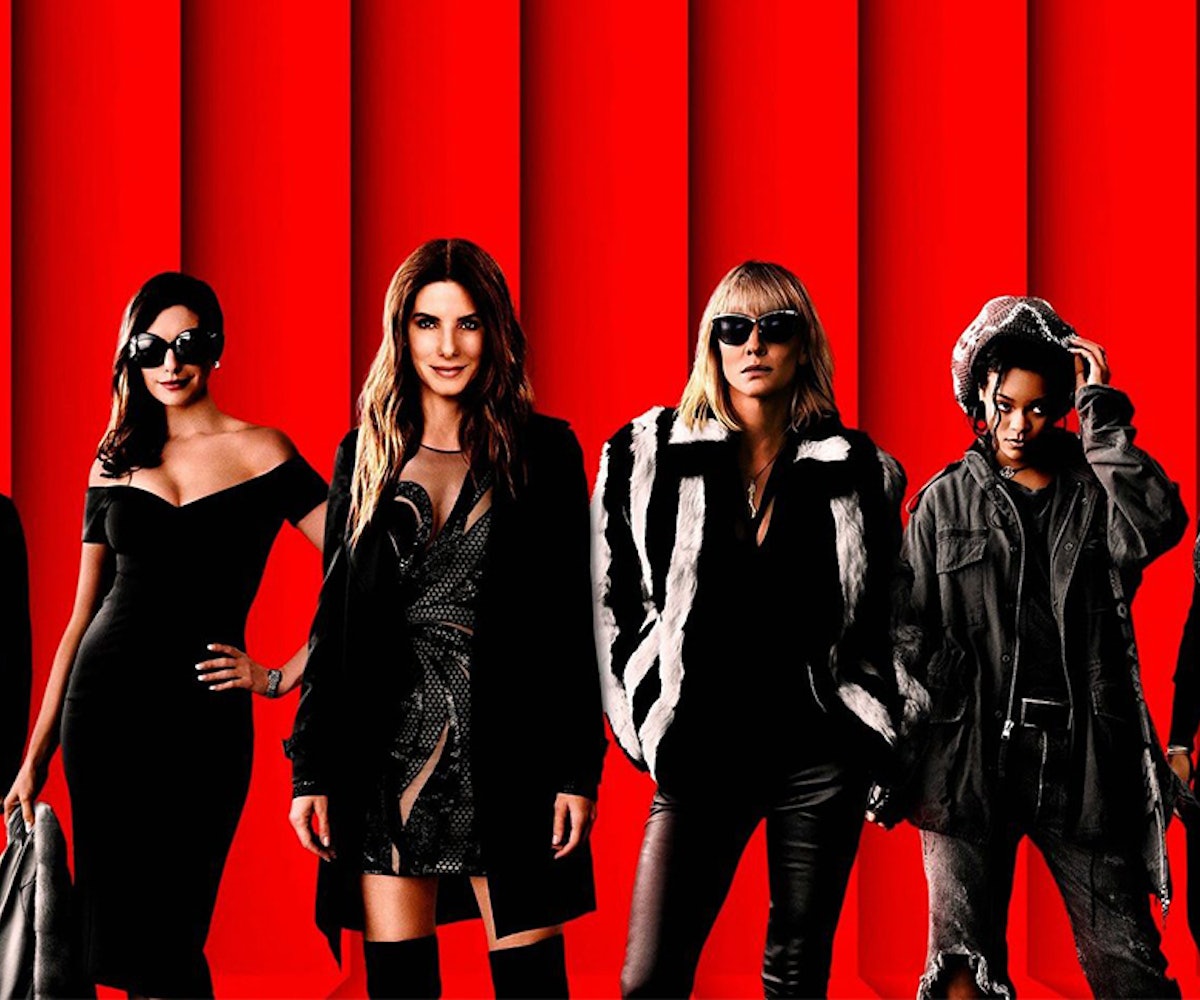 Brian De Palma’s Femme Fatale (2002) begins with the heist of jewels right off the body of the vain, gorgeous celebrity wearing them down the red carpet at the Cannes Film Festival, in a scheme—and a sequence—fueled by the almost pornographic excitement of glitzy movie make-believe. In Ocean’s 8, Sandra Bullock and her team of con-women plot to lift a Cartier necklace the size of a small chandelier off the décolletage of Anne Hathaway, playing a movie star who’s more or less Anne Hathaway, at a Met Gala staged for the film and with help from a truly exhausting array of famous friends (Kim K.! Serena! Matt Harvey!). The theme of the celebrity hangout-within-the-celebrity hangout movie is, naturally, royalty. And while Femme Fatale shivered with pleasure at the sinuous unfolding of cinematic clichés, the intoxicating element in Ocean’s 8 is high fashion and fame itself.

Bullock’s Debbie Ocean is supposed to be the sister of Danny Ocean, the George Clooney character from the Bush-era trilogy of neo-Rat Pack romps, and the film follows a similar formula: Out of jail in the eveningwear she was wearing when she gets in, she immediately enlists her exasperated but game sidekick (Cate Blanchett in the Brad Pitt role) in an overelaborate theft which will require them to assemble a diverse team of quirky specialists from across the film industry. The heist itself in Ocean’s 8 is entirely generic, neither particularly intricate nor wickedly suspenseful, so the primary appeal is the someone-for-everybody ensemble, with a number of female stars (the title of the film counts as a spoiler) trading one-liners in the open-plan loft space where they prepare for the heist, like a sort of crime atelier.

The prep for the heist takes up a relatively short segment of the movie and doesn’t allow the cast to play off each other very much, so it’s mostly a matter of soaking up individual personae. Bullock is the wry ringmaster, saddled with an unnecessary backstory—even if this film must exist in the same “universe” as the previous Ocean’s films, rather than be an all-female a remake, it’s still a mistake to stick Bullock under Clooney’s shadow, especially in self-referential ending that has nothing to do with an audience that will surely be younger and more female than from more than a decade ago. Cate Blanchett has no backstory, just an endlessly watchable way of sitting and swaggering at the same time, her legs sprawled out mischievously in Kate Hepburn-ish pants and tailored blazers (Harold…). Perhaps the film can interest you in Rihanna as a stoner whose miraculous hacking skills are the black box where all the really crucial heist stuff happens, and who should probably demand a bigger share of the take, sisterhood be damned? Or Awkwafina as a pickpocket, who is also a stoner? Sarah Paulson, in a Peter Pan collar? Helena Bonham Carter, in an Edwardian K-hole? Mindy Kaling as the one who lets out a far-off aspirational sigh when the glamorous setting for the heist is unveiled? (You knew it would be her.) Hathaway parodies her own image as a high-strung drama-queen priss as the target, “Daphne Kluger,” her fame exposited with wire-service photos of Hathaway but also turns up the vanity to an ecstatic, neck-caressing frequency that harmonizes with the general ambient horniness of all this feminine finery—she’s her own girl crush.

It’s not just Hathaway who gives less a performance than a cameo—these are all self-aware star turns. (The Clooney Ocean’s movies were, of course, the same.) Anna Delvey was able to scam her way into high society simply by showing up in places where no one without money would have the balls to go. For a while, she was so ensconced within SoHo boutique hotels and international art fairs that the ordinary core of herself was hidden—the scam only ended when her credit ran out.

The premise of Ocean’s 8 is, nominally, that its characters are similarly outsiders infiltrating the world of Wintour. But this is the barest pretense. The film opens with Bullock in a prison jumpsuit and, as a tight enough close-up shows, professionally applied eyeliner—she’s never looked less like one of the gals. The audience is the only gatecrasher, and the film plays along indulgently, like we’ve won a charity auction to be there, or maybe like they’re waiting for security to show up. In the same way that the Metropolitan Museum of Art Costume Gala attendees and their designers all lend each other their cultural cachet in a self-perpetuating razzle-dazzle, the film surrounds itself with New York bling, from the Met’s Van Gogh self-portrait to high-end Manhattan retail (and, for a touch of canonical grit, Veselka), all augmenting, and augmented by, the star wattage, as much as the on-point makeup and hairstyling.

When the film contrives to get its stars into gowns at the end of the job, for reasons which appear quite irrelevant to pulling it off successfully, it doesn’t look like they’re playing one-night-only dress-up—it looks like they belong. In fact, Rihanna gets a head-to-toe reveal in a dress that—as most people who see the film will know, having clicked through slideshows this May or last—is pretty underwhelming compared to how hard Rihanna usually goes at the Met Gala. It’s the rare bounced check, a moment where Ocean’s 8 fails as fantasy; to the extent that the movie will work, it will be because its audience is happy to live inside the dream it’s selling. Femme Fatale knew this; so do all really successful grifters, and all really likable celebrities. The movie itself is the con.

NEXT UP
Entertainment
Florence Pugh Is A Gothic Nurse In Eerie 'The Wonder' Trailer
Entertainment
Jared Leto To Star In Karl Lagerfeld Biopic
Entertainment
Lindsay Lohan Teases Her Return To Film, 'Falling For Christmas'
Entertainment
John Waters To Make His First Movie In Nearly 20 Years