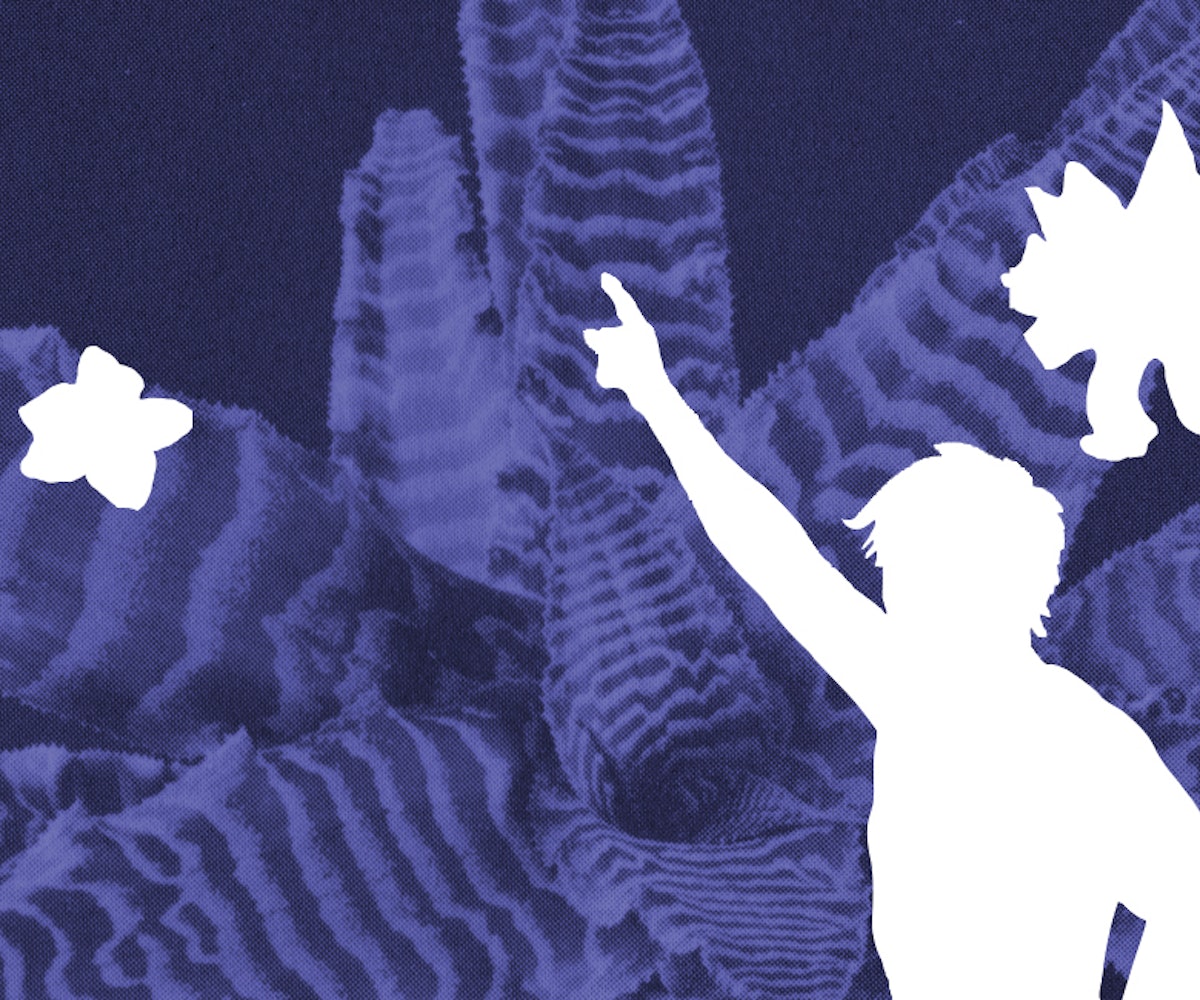 What subtleties, precisely, my 13-year-old ears picked up on when I first played of Montreal’s 2008 album Skeletal Lamping is beyond me. It’s a hedonistic affair, joyful in some moments, utterly painful in others. The album veers from darkness to light rather purposefully, sliding from the somber lyrics of “Touched Something’s Hollow” (“Why I am I so damaged, girl?”) to the horn-driven burst of energy of “An Eluardian Instance.”

Perhaps the thing I didn’t directly perceive at the time, but which had an incredible impact on my development, was just how queer the album truly was. There’s no shortage of music that exists to extol a singer’s sexual desires, of course, but there’s not a ton of tracks like “Id Engager,” where Barnes laments, “Ladies, I’m screaming out to you from the depths of this phallocentric tyranny.” Coming from a male singer, it was especially surprising to hear Barnes express a sense of disconnection from his masculinity, a frustration with the gender status quo. It was a powerful message, one whose real impact would take years to fully flower.

Jump ahead to last September. of Montreal was playing at the Metro in Chicago, in support of their latest album, Innocence Reaches, one that harkens back to some of the band’s most inspired attempts to explore questions of sexuality. “It’s Different for Girls” is an unabashed feminist anthem, with Barnes capturing the myriad of ways in which women are expected to conform to a world shaped against their interests. Barnes captures the unambiguous shittiness of how sexism hurts women (“From when they are children they are depersonalized, aggressively objectified”) But he also leaves room to contemplate the ways in which women may experience the world more honestly and compassionately, as when he sings, “They’ve got sensitive language… they’re not numbed by oppression.” The music video is a raucous dance party, with Barnes, in a coiffed wig and glittery makeup, acting as MC.

Such positive energy was in ample supply at the Metro, unsurprising but deeply appreciated that night. The show was the first time I felt emboldened to wear a dress in public, not simply around the house as I had done for the past few months. In an orange-pink shirt dress, a gift from my girlfriend, I felt flowy and free, joyful to be surrounded by an audience of similarly gender-bending folk. The good vibes didn’t even disappear as my friend and I left the show and found ourselves in Wrigleyville, where Cubs fans gawked and some even filmed the sweaty, unabashedly queer crowd leaving the venue.

In an uncomplicated fashion, Barnes and of Montreal have given me space. As a confused 13-year-old, not yet capable of processing the emotional complexities that coincide with such a tumultuous period, I couldn’t sense the ways in which this music was preparing me for where I am now, almost a decade later. But I don’t think I could have reached this state without that preparation, without sharing a passion for their music with people like my friend Sarah, who, being a few years older than me, was a role model for a sense of sexuality that felt gleefully untethered from restrictive gender normativity. Bit by bit, these life experiences would further a knowledge of my own desires and comfort levels, pushing me to the place I am in today.

It’s an ongoing, never-ending process, of course. As I recently voiced my worries of claiming queerness as a cisgender, mostly heterosexual white guy, my roommates were graceful and compassionate, sharing their own messy journeys as evidence that queerness isn’t a fixed state but an ever-flowing sense of pushing against constricting boundaries and expectations. Having built an initial sense of how I want to relate to the world and my own masculinity, I’ve been so fortunate to have their guidance and support, humbling and affirming in equal measure. Importantly, they reminded me to never forget my other identities in queer spaces, to understand how my whiteness and maleness will continue to influence my relations with others, as I continue to navigate the messiness that comes with personal growth.

In this process, it’s also been important to look critically at my role models and understand the mistakes they’ve also made along the way. With of Montreal, the glaring issue is Georgie Fruit, a “black she-male” that Barnes created as an alter ego on Hissing Fauna, Are You the Destroyer? and Skeletal Lamping. In an interview from 2007, Barnes described Fruit’s backstory:

The character's name is Georgie Fruit, and he's in his late forties, a black man who has been through multiple sex changes. He's been a man and a woman, and then back to a man. He's been to prison a couple of times. In the 70s he was in a band called Arousal, a funk rock band sort of like the Ohio Players.

Barnes quickly owned up to having no lived experience in common with this creation, but called his adoption of the persona “a very pure experience.” For Barnes, it seemed that George Fruit was an attempt to channel his love for ‘70s funk music, like Sly and the Family Stone and Isaac Hayes more concretely, in the process creating a character that has no connection to Barnes’ actual identities.

Though Barnes never pushed this persona to the level of performing in blackface, still, he clearly used Georgie Fruit as a vehicle to stereotype black hypersexuality, creating a figure that ignored the very real violence against black transgender people (and black people more generally). In another interview from that period, Barnes suggested that he somehow wasn’t responsible for his alter ego’s actions, saying: “If I'm Georgie Fruit, I can say whatever I want—I can be raunchy and rude and insensitive, but it's not me.” As Jazmin Applin wrote on her blog, “goddammit I am sick of white people appropriating blackness to work out their shit.”

Accepting these downsides to Barnes’ approach has been critical to understanding my own evolving sense of identity. While Barnes quietly retired Georgie Fruit at some point in the past few years, paying little cost for adopting the character in the first place, I hope that maintaining accountability for myself and my influences ensures that the messiness of these changes does not hurt others along the way.

Sadly, it’s not always that easy. We build friendships, we learn and grow from the people around us, and we fuck up. I’ve hurt a lot of people in the last year, often in moments where I thought I was making important strides for myself and my sense of self-expression. Learning to balance one’s own needs with those of the people that surround you will always be a struggle, and while a lot has changed since last September, I often fail to find that balance on a daily basis.

Thankfully, queer spaces like of Montreal concerts have been there as a reminder that we’re all on concurrent paths of messy self-actualization, constantly fraught with error but joyful nevertheless. I’ve been lucky to see them twice in the past few months with my girlfriend, who has been the most affirming presence in this entire journey, a constant source of moral support and stellar femme fashion advice. Sharing the show with her, comfortable in a brand-new thrift store dress and surrounded by so many others dressed to the flamboyant nines, all the endless waves of self-doubt would melt away, crowded out by the blissful energy radiating forth from the stage.

In these dark political times, of Montreal continues to provide a shining light of unapologetic positivity, a sort of radical happiness that can help build back a sense of resolve when it’s too easy to feel beat down. In spite of battling plenty of his own demons, I’m glad that Barnes knows how much of an impact he’s had on others, like when he told the Westword earlier this year:

If we can provide any sort of pushback from that and create a friendly, positive, loving environment for people to experiment with their sexuality and with their self-identity and other things, I think it's great. I mean, that’s what it is for me, and it would be great if it’s that for other people, as well.

I’ve certainly benefited from having Barnes as a role model as I’ve grown into young adulthood, helping me build a confidence in gender practices that deviate from rigid masculine norms. And with the group making music that’s just as fresh and relevant a full decade later, it’s heartening to think of a new generation exposed to their work, complemented by a growing coterie of successful queer artists (many of them, artists of color) serving as guides toward new approaches to gender and sexuality. Only time will tell what this beautiful moment for queer pop culture will mean in reshaping society at large, but I’m hopeful.

NEXT UP
Entertainment
RM's "Yun" & 9 Other New Songs Out This Week
Entertainment
Caroline Polachek Announces Album ‘Desire, I Want To Turn Into You’
Entertainment
Everything We Know About SZA's New Album
Entertainment
Precious Pepala Is Going From TikTok Covers To Her Own Resonant Songs